This season was meant to see Fulham return to the Premier League.

The Whites were many bookies’ favourites to go up after their impressive 2016/17 campaign, where they reached the play-offs playing arguably the best football in the Championship.

Until last season, the Cottagers had never really looked like returning to the top flight of English football following their relegation in 2014.

Years of mismanagement and poor managerial appointments, including Felix Magath, whose tenure set Fulham back a number of years, and Kit Symons, who stabilised the team but wasn’t the man for a proper promotion push.

Slaviša Jokanović was meant to be the man to fix all this.

Fulham waited for more than six weeks to get their man after sacking Symons, all but writing off the 2015/16 season, a decision that almost paid off in 2016/17, with the Whites finishing sixth.

Their form over the last 28 games of the season was the best in the Championship, and many expected them to carry that into the current campaign.

But after 20 games, with nearly half the season gone, Fulham sit in 15th and were beaten 3-1 by local rivals Brentford on Sunday.

The Whites' win at Griffin Park last season laid a marker down to other Championship clubs that Fulham were playing fluid football, could dominate games and get results in matches they previously would have lost.

Yet the defeat this season suggests they’re back to where they’ve been in the second tier, towards the bottom half of the table.

And the current run of results, with just two wins in nine matches, is undoubtedly below expectations. It has led to some calls for Jokanović to go.

But it is surely too early for Fulham to get rid of the best manager they’ve had for years.

The summer transfer window was hailed by many as a success for Fulham.

They saw off Premier League interest in their two biggest stars, Tom Cairney and Ryan Sessegnon, signing them to new contracts, all while bringing in the likes of Sheyi Ojo, who was also a Middlesbrough transfer target, and highly-rated Porto left-back Rafa Soares.

But there were massive holes left in the squad. Last season, Fulham only really had one striker, Chris Martin, but he returned to Derby County after his loan spell came to an end.

The Whites knew that bringing in a forward was a priority, with Cauley Woodrow (who has now gone on loan to Bristol City) and unproven Stephen Humphrys the only options in the squad.

So in came Rui Fonte and Aboubakar Kamara with big expectations.

Fonte came in with a glowing reference from vice-chairman and director of football operations Tony Khan, who said: “Rui Fonte is a substantial talent, and I'm thrilled to welcome him to the Fulham Football Club.

“We have been interested in Rui for a long time. We have great aspirations for the future of this club, and today we have taken another step towards realising them by adding a striker known for his immense skill and selfless teamwork.”

Khan made similar comments when Kamara signed: “Today is a big day for Fulham. We're excited that Aboubakar Kamara has joined our great club.

“Aboubakar brings exceptional speed and finishing ability up top and, despite his youth, he's already played a major role in achieving promotion for his prior club. It’s no secret that we’ve had interest in Aboubakar for some time, and I'm confident that it won’t take long for our supporters to see why.

“We’re delighted to welcome Aboubakar to Fulham, and we'll continue to do everything we can to build for the brightest possible future for the Club while also working hard to give our amazing supporters the excellent results that they deserve in the season ahead!”

The lack of comment from Jokanović is noticeable, but it was clear that he didn’t have the biggest say in who Fulham brought in. The Serb made his unhappiness clear during every transfer window.

Of course, his job is to get the best out of the players at his disposal, but so far Fonte and Kamara haven’t lived up to expectations, despite the very big billing from Khan.

The Portuguese forward has managed just one goal, and the Frenchman just two.

Perhaps more worryingly, AK47, who’s not quite the sharp shooter his shirt number suggests, has only had two shots on target this season. He’s had 20 attempts on goal.

Fonte, on the other hand, doesn’t look like a striker, and even though Khan pretty much hailed the duo as the second coming, neither signing has helped the club reach their aspirations this season – it’s perhaps no surprise that they went in for Dwight Gayle on deadline day.

Although Jokanović boss did play with a false nine on occasions last season, it was mainly an attacker such as Floyd Ayité or now-departed Sone Aluko, rather than midfielder Stefan Johansen as he did against Brentford. Playing a midfielder there just showed how little confidence he has in the Whites front line.

If Fulham had a decent striker, there’s no doubt they would be higher up the league, and that’s not down to their current boss.

Striker isn’t the only issue either. The squad is overloaded with wingers, with Yohan Mollo hardly featuring, but is short of left-backs.

Sessegnon looks better further forward, while Soares has hardly been fit since his arrival – it wasn’t the best move to sign an injured left-back after selling last season’s first choice, Scott Malone.

There are also issues at centre-back. Marcelo Djaló, who was signed, is below the standard, which has meant that right-back Denis Odoi has had to stand in. With better recruitment, these issues would have been sorted. 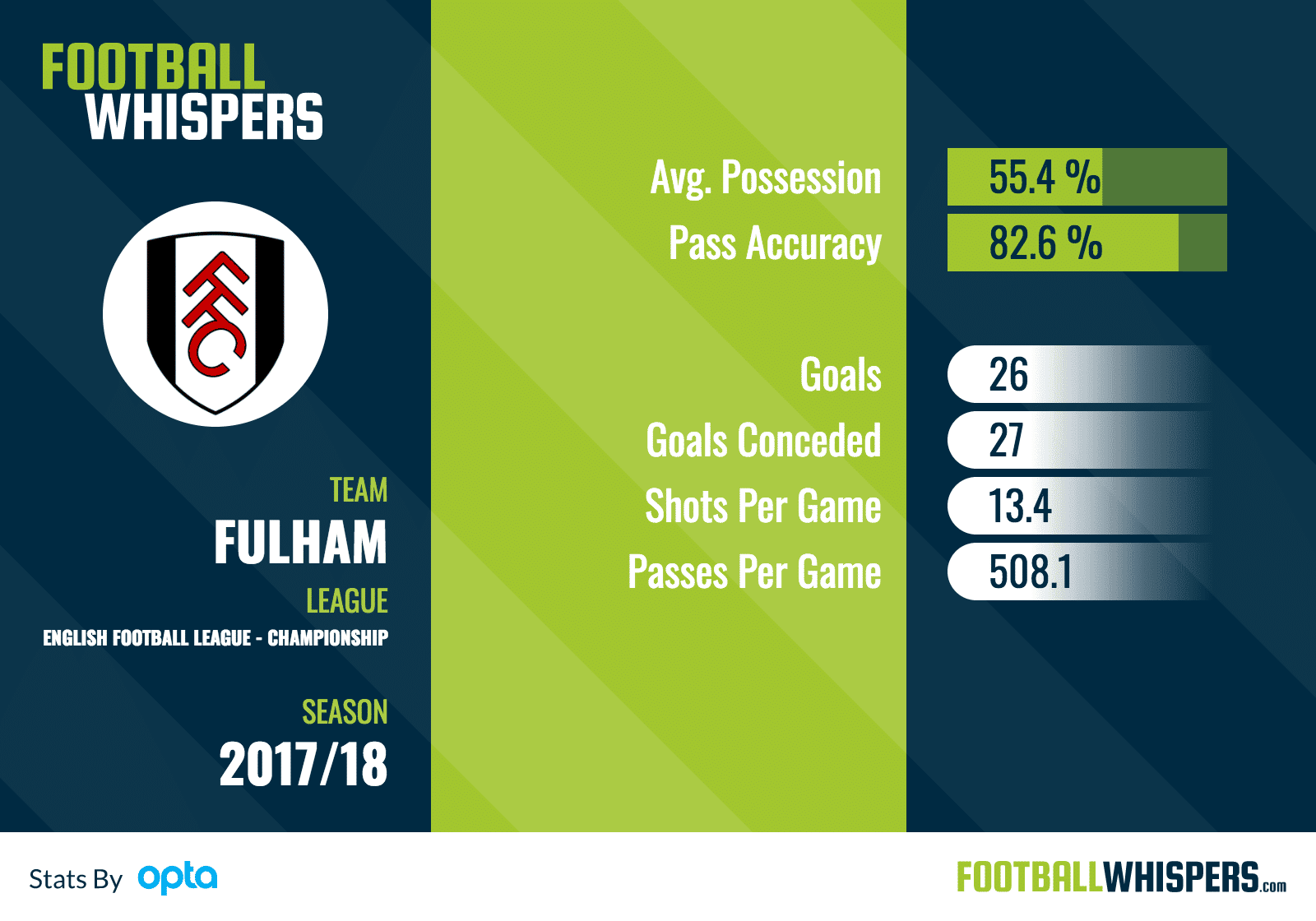 What’s more, one of the league’s best players, Cairney, spent much of the beginning of the season missing through injury.

He was suffering with knee problems throughout pre-season and the injury has meant he hasn’t had the chance to become the force he was last season.

In 2016/17, he managed 13 goals and ten assists, scoring big goals in key games, such as a late equaliser against Leeds United.

So far, in 2017/18, he’s managed just nine league starts, scoring once and not making any assists.

That’s a real loss of creative influence for the Whites. Before Cairney’s injury, he was being talked of as a £20million player and was a Newcastle United transfer target.

Instead, he’s struggled for fitness and failed to properly replicate last season’s form. That’s been a massive blow for the Whites.

Other key players such as Piazon, Ayité and Ojo have also missed long chunks of the season through injury.

It’s obviously part and parcel of any campaign that players pick up knocks, but it has to be taken into account when judging Jokanović.

Build for next season

The last thing Fulham need is a complete reshuffle at the top.

With the departure of Craig Kline, the data specialist Jokanović had publicly clashed with earlier this year, the January transfer window gives the Whites board a chance to back their manager.

There’s a nine-point gap between them and sixth place, and while there’s more than half a season left, realistically the Whites aren’t going to get promoted given their current form.

They are also ten points off the relegation zone, and unless there is a horrible run of form, going down is also unlikely.

It’s time to pretty much write this season off, unless it goes horribly wrong, and build for next year.

Jokanović has proven he’s the man for a promotion push, he’s already done it at Watford, and nearly did so at Fulham last year.

It may not have worked out this season, but all isn’t lost and it would be harsh to let him go based on poor recruitment that had nothing to do with him.

Bringing a new man in would mean starting afresh once again. Jokanović has steadied Fulham after a bumpy few years so it’s only fair to give him time to try and finish what he’s started at Craven Cottage.

And with the likes of Mark Hughes, Martin Jol, Rene Meulensteen, Magath and Symons all leaving the club in a sticky situation over the past few years, is it really worth getting rid of the manager who's arguably been the best for Fulham since Roy Hodgson?