In August 1960 a promising young band called the Beatles travelled to Germany from Liverpool to seek their fortune in the vibrant city of Hamburg. 17 years later and Kevin Keegan was to make a similar journey as part of his own meteoric rise to global fame and chart domination.

Keegan had only just celebrated Liverpool’s first ever European Cup after the Reds had beaten Borussia Mönchengladbach in Rome on May 26th 1977. But it was to be the last act in his short affair with the Anfield club as he had already made an agreement with chairman at the time John Smith that this campaign was to be his last as he sought his next challenge.

Maybe selfish, maybe self-centred, Keegan knew his worth and even insisted on a £500,000 release clause in his Liverpool contract; but this would ultimately mean that several giants of the game would be deterred from making a bid, finding it hard to justify such a high price in the pre-million pound transfer years, even Bayern Munich called the amount, “ridiculous.”

Fortunately for Keegan though there was one team for which money was no object. Hamburg SV were a club from one of Germany's biggest cities, full of ambition and a founder members of the Bundesliga who now had cash to burn following significant investment from Japanese firm Hitachi.

They were hoping to build on three decent seasons and their recent European Cup Winners Cup final triumph over Belgian side Anderlecht and were guided by general manager Dr Peter Krohn, who was a huge fan of Keegan’s and was prepared to break the bank in order to get his man. The deal would see Keegan’s earnings rocket from a relatively measly £12,000 a year at Liverpool to a cool £250,000.

Krohn saw this as Hamburg’s moment. A time for the club – who had spent so much time in the shadow of Bayern Munich – to shine and make a name for themselves; not just in Germany, but throughout Europe too. And who better to symbolise this new found ambition than a man who was one of the game’s very first pioneers?

It was a marriage made in heaven. Hamburg wanted him and could afford to give him what he wanted; for Keegan, a footballer not shy of putting his own interests first, it was a win, win situation.

Keegan wasted no time in cashing-in on his new-found status as the game’s newest superstar and put his name to everything from sportswear and aftershave to computer games and road safety campaigns. But despite his new found riches, his off-field success was soon to cause problems among his new team mates.

Having only just tasted European glory, the team felt there was no real need for any new signings, especially Keegan, who was seen as a flash and expensive addition to a down-to-earth, workmanlike side. 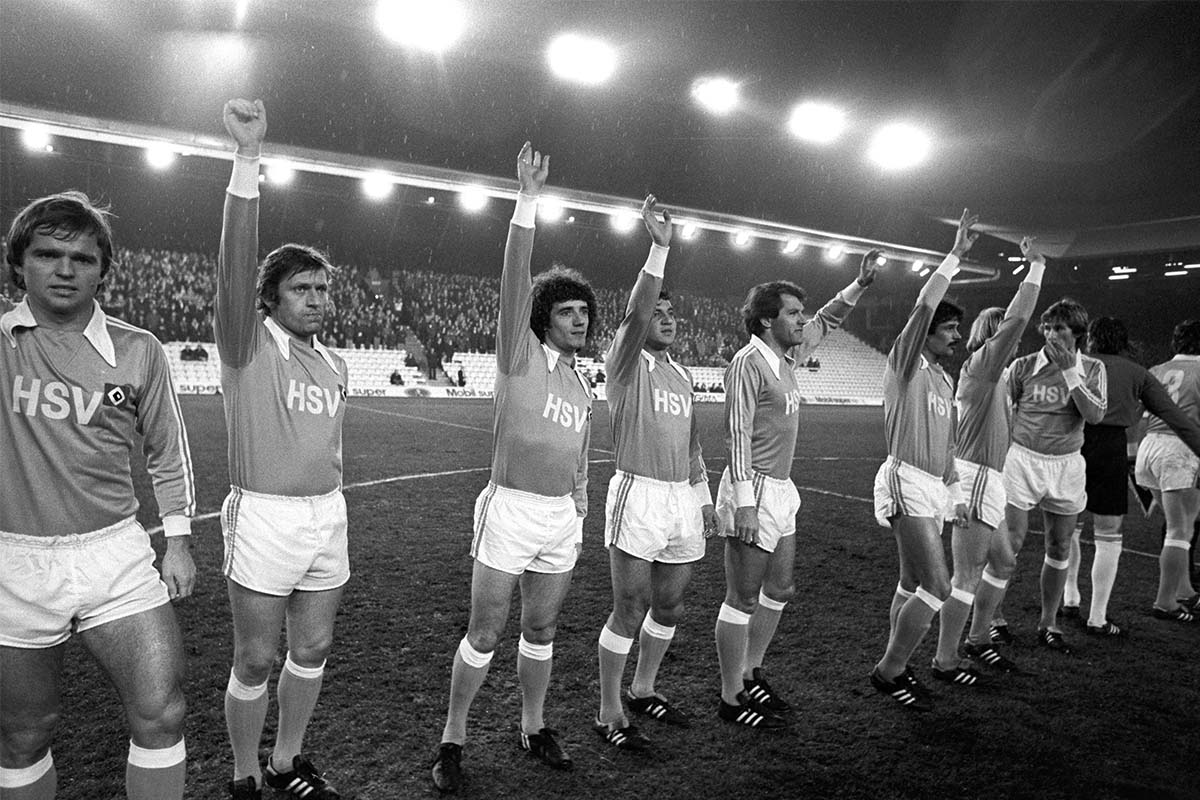 That particular success though had come under popular coach Kuno Klotzer, who had now been replaced by Rudi Gutendorf. In a 2013 BBC interview Gutendorf described the astonishing reaction to the club’s new addition: “The Hamburg players came to my room and said: ‘We don’t like this English guy. We won the cup and we don’t need him and we don’t like him. If you put this little English guy in, we don’t want to work with you’.

“But I wanted to make a very big team like Bayern Munich and with Keegan it was possible. I’m sure today that the players made sabotage against me. The first game of the season we lost 5-2 and I saw that my players didn’t like to win.”

Things for Keegan hadn’t gone too well when it came to settling in to his new surroundings either as he and wife Jean had to spend their early weeks in the city living in a hotel room along with their beloved sheepdogs which they had taken to Germany with them. Only when he moved to a farmhouse on the outskirts of the city did he start to feel more settled, even so, he still felt like something of an outsider following his dream move.

“Going to Germany was a tough one,” he would say some years later. “After five or six years at Liverpool I’d run my race there. I just fancied a challenge, and Germany was my challenge.”

But Hamburg made a poor start in Keegan’s first season and in the space of just a few days the men who had orchestrated his arrival had both left the club. Former goalkeeper Ozcan Arkoc, who had been working as assistant coach,  took charge but there was no improvement in fortunes for the team or their star player – the situation got worse when he was paired against his old pals for the two-legged European Super Cup final.

The teams drew 1-1 in Germany, but Hamburg were thumped 6-0 defeat back at Anfield thanks, in part, to a Terry McDermott a hat-trick. To rub salt into the wound the Kop chanted “You should have stayed at Anfield,” at their former favourite.

But towards the end of that 1977-78 season, and thanks in part to the appointment of 1974 World Cup-winning midfielder Gunter Netzer, Keegan’s form had turned on its head despite mixed results for HSV; who eventually finished ninth in the Bundesliga. Such was his transformation he would be awarded the Ballon d’Or thanks to 12 goals and plenty of industry which led him to win-over the doubters and gain the nickname, “Mighty Mouse” from the very fans that had criticised him – all this despite the fact many of his colleagues still didn’t want to pass him the ball.

During the summer of 1978 Keegan had been covering the World Cup in Argentina for British television in London and would return to Hamburg to find that Yugoslavian Branko Zebec was now the new team manager. A strong disciplinarian, Zebec had offloaded those players whom he felt were creating problems around the club and introduced strict new training schedules in order to increase fitness.

Despite Keegan feeling the new draconian training regime hampered his natural style of play the result was a team in such good shape that it blew all that came before them out of the water that season. He even had a new strike partner in the form of the big target-man Horst Hrubesch, who allowed him to flourish in the same way that John Toshack had done during their hugely successful partnership back in Liverpool.

Keegan was key during the last few months of this, his second season, scoring 11 goals in the last 12 games and forming a wonderful partnership with Hrubesch, as well as teammates who were happy to play alongside him. From 10 March to 9 June the team did not lose a match, almost three months undefeated and HSV claimed the title having won 21 of their 34 matches. Keegan’s part did not go unnoticed and for the second year in a row he was voted European Footballer of the Year.

The 1978/79 season was the last of Keegan’s initial two-year contract which once again brought about a flurry of interest from Europe’s elite clubs. But it was the Washington Diplomats who looked like they would acquire his signature apparently thanks to £250,000 for a four-month contract in America. 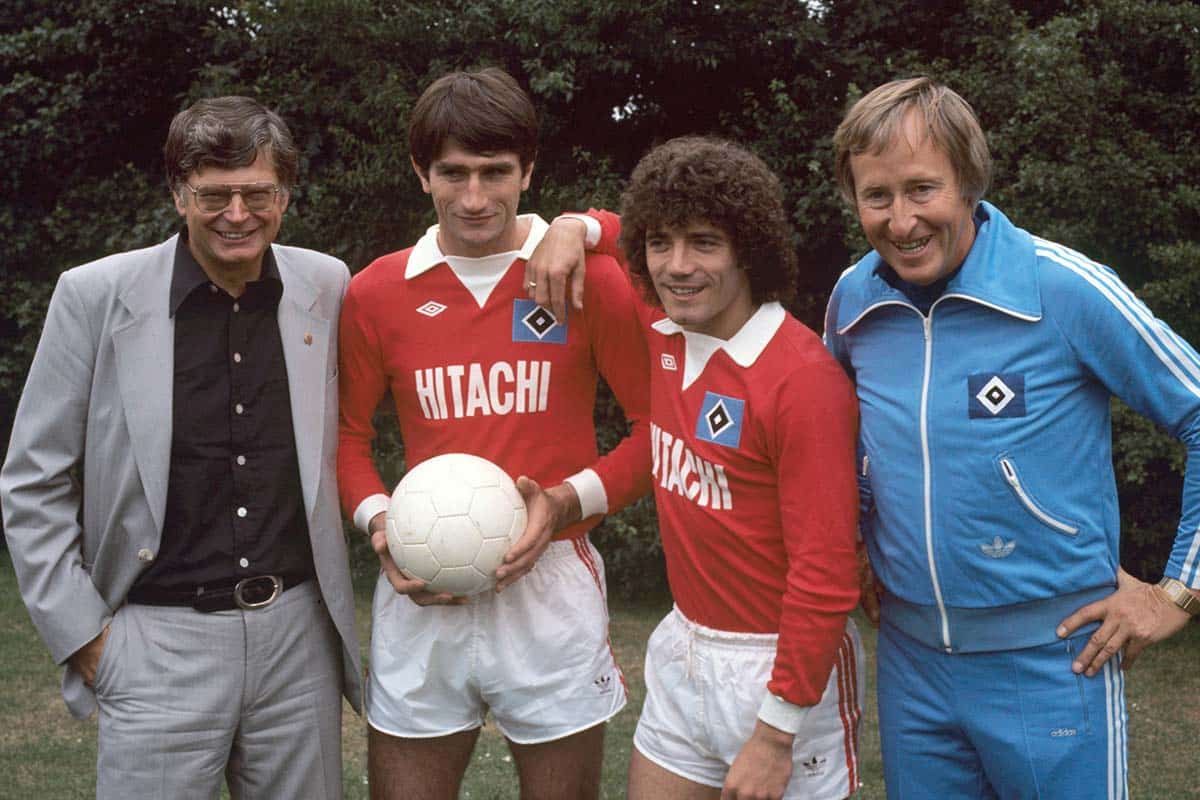 Netzer, keen not to lose his best player, suggested something of a compromise which would see the star move to the United States temporarily while still playing for HSV. But with Keegan all set to board Concorde, it was pointed out that if he did so it would mean he would be ineligible to play in the upcoming European Cup until the semi-final stages due to UEFA rules.

One of the main reasons he wanted to stay with Hamburg had been to compete in Europe again, so after much deliberation and yet another handsome pay rise Keegan stayed in Germany with Washington having to make do with a certain Johan Cruyff as a more than able deputy.

This also meant there was still time for Keegan to emulate the fortunes of those four shaggy haired lads who had left Liverpool for Hamburg 17 years before him when he released a single that would take the nation by storm. “Head Over Heels in Love” was the idea of Keegan’s Yugoslav team-mate Ivan Buljan, and went on to sell almost a quarter-of-a-million copies in Germany alone. Unfortunately for Keegan he had opted for a one off payment of £20,000 rather than royalties from future record sales, meaning Buljan and his music producer friends did much better out of the venture than he did.

But it wasn’t chart success Keegan had in mind when he left Liverpool. After departing Anfield on the back of a successful European Cup campaign in 1977 he had made it his goal to do the same with Hamburg. And so it was to be that in order for Keegan to win his second European Cup medal in just three years, his Hamburg side would have to defeat Brian Clough’s Notting Forest in the Final.

Forest had different ideas though and a John Robertson goal in Madrid not only livened up a disappointing final, it also ensured Clough’s men would retain the cup they had won 12 months previously in what was to be Keegan’s last chapter in his German adventure -as it had been in 1977, the European Cup Final had been Keegan’s very own curtain call.

Keegan would never get the send off that his time at Hamburg deserved when he departed Germany for the English south coast and Laurie McMenemy’s Southampton.  In his three years at HSV he’d won the Ballon d’Or twice, the Bundesliga title and taken them to the European Cup final almost single handedly, not to mention recording a top-10 smash hit record.

But it was his never say die attitude, hard working nature and endless running which endeared him to the Hamburg people in the same way that the Beatles had done a decade and a half before him – and for that he will always be remembered fondly in Germany.