From future star to forgotten man; yet Oscar can still dazzle in Europe

With one exceptional touch Leonardo Bonucci and Andrea Pirlo were taken out of the game. From the shot that followed the ball flew into the top corner of Gianluigi Buffon's net. In an instant, a star was born.

That goal was scored by Oscar on his first start for Chelsea. It was his second of the Champions League group-stage clash, a match in which he announced himself to a European audience.

The Brazilian had arrived from Internacional in the summer of 2012 for £20million. He had been compared to Kaká in his homeland and helped Brazil to a silver medal at the London Olympics.

His performance against the Serie A giants promised so much. It was fearless and full of adventure. Yet it's telling the game is seen as the highlight of his four-and-a-half years at Chelsea, for whom he made over 200 appearances.

His first campaign in England – under the guidance of first Roberto Di Matteo and then Rafa Benítez – resulted in 12 goals and 12 assists in 64 matches in all competitions. From then on, under first José Mourinho and Antonio Conte, his output began to drop.

There were 11 goals and ten assists in 2013/14. Seven and nine the following season. Eight and five in 2015/16. And he made just nine league appearances in 2016/17 before being sold in December to Chinese club Shanghai SIPG.

It's hard not to feel the Brazilian was a victim of circumstance. He won the Premier League under Mourinho but the Portuguese always favoured his off-the-ball work rather than his ability in possession. As such, Oscar went from creator to workhorse.

By the time Conte arrived in the summer of 2016, the imagination in his game had dwindled. And the Italian, a stickler for defensive shape and team structure, was never going to be the right coach to help the attacking midfielder rediscover it.

Yet when Oscar moved to the Chinese Super League, many felt he'd made a poor decision, that he was entering semi-retirement at just 25 years old.

Oscar has never attempted to disguise the reasons for his move to the Far East; he went for the money. His £400,000-a-week contract, in addition to sponsorship deals, makes him the sixth-best-paid player in world football according to Forbes. It was a transfer that secured his family's future for generations to come.

“When I made the decision to come here, I was thinking more about my family than of my career,” he explained in an interview with Copa 90 last year. “Every person who works wants to earn money to help their families. I came from a social background in Brazil that is very poor. We didn’t have anything. This is the fruit of my work and when I earn this, it is because I conquered it.”

Oscar's contract with the Chinese club runs until December 2020. He will be 29 years old when it expires and still young enough to make a return to Europe.

However, he has made around £40million in the past two years and this season helped Shanghai SIPG end Guangzhou Evergrande's grip on the Chinese Super League title. So why not head back to Europe now?

Of course, no club will match the wage he currently receives. And that will understandably be a sticking point. Nobody in life wants to take a pay cut, after all.

Yet the Brazilian would do well to take heed of the famous quote from American writer Mark Twain: “Twenty years from now you will be more disappointed by the things that you didn’t do than by the ones you did do.”

Oscar still has plenty to give at the top level of the European game. His technique remains flawless, his vision impeccable and the adventure in his game that dissipated during his time at Stamford Bridge has returned.

It's why the 27-year-old was the driving force behind Shanghai SIPG's title win. In 29 league games this term he struck 12 goals and claimed a staggering 22 assists. Often his passes would unlock an entire back four, a mark of his quality but also the weakness of the Chinese top flight. 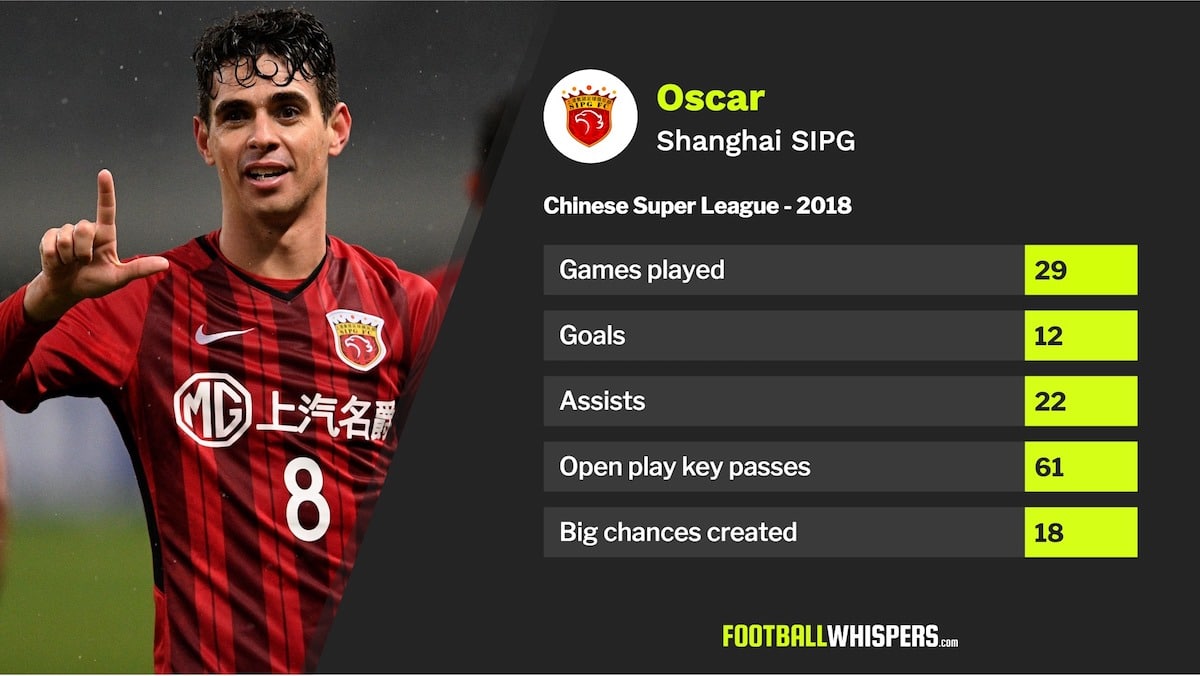 He also looked sharp in the Asian Champions League; his four goals and an assist coming in seven matches – the Chinese club were knocked out by eventual winners Kashima Antlers in the last 16.

So when Oscar decides his time in China has achieved its purpose, there won't be a shortage of clubs interested in his signature.

“When I was talking with Shanghai, I was talking to big clubs from Europe as well,” Oscar revealed to Copa 90. “There was Atlético Madrid, who I almost joined. I liked them very much and what they were offering me at that time. There was also Juventus, Inter and AC Milan.”

Would those same clubs be interested? Perhaps. The managers of Atlético and Juventus remain the same. A return to the Premier League isn't out of the question either, and several English top-flight sides would have the means to convince him to return.

One of which is his former club. Since he left Chelsea the club has changed manager – no real shock there given the turnover of coaches at Stamford Bridge.

But what would intrigue him is the change of approach under Maurizio Sarri. For years under Mourinho and Antonio the Oscar creativity was stifled. Under the Italian, he'd be liberated and perhaps the ideal No.8 for his system.

“I would be very happy [to return to the Premier League],” Oscar told PL Brazil in 2017. “And preferably to Chelsea, who opened the doors for me to return.”

A year on and that door may no longer be open. Yet others around Europe will be when the Brazil international chooses to return. There will be plenty of nominees. The big unknown is who the Oscar goes to…