Italian football is no stranger to controversy and scandal, but in 2015 the country that’s shaped like a boot and ball was rocked yet again as one of its greatest success stories became the latest victim of poor ownership and long-term financial turmoil. The 2014-15 season concluded with Parma FC, who had finished the previous campaign with a top six finish, finishing rock bottom of Serie A. With debts mounting to almost £300m, the relegation didn’t just signal the end of their time in the top flight; it also reflected the death of a club as we knew it.

Serie A had lost one of its greatest representatives. Worse still, a city had been robbed of its sporting identity.

After folding at the end of the 2015 campaign, S.S.D Parma Calcio 1913 was established and 9,000 season tickets underlined that the love of football in the city will never fade. Nevertheless, seeing a team ply its trade in Serie D is a far cry from what fans at the Stadio Ennio Tardini are accustomed to. So how could a club go from winning European silverware to being forced to relaunch as an amateur outfit in the space of two decades?

Sadly, the demise of Parma as we knew it wasn’t even an overnight development. Everyone could see it coming, but nobody had the power to stop it.

Italian football had already suffered the devastating impact of corruption earlier this century courtesy of the infamous Calciopoli scandal of 2006. That embarrassing episode saw Juventus, amongst others, pulled into the mire, but the final chapter of Parma’s life in Serie A was perhaps the most shameful in the country’s history.

In truth, the writing was on the wall long before the club started pulling out of matches due to financial issues. Nevertheless, seeing a top flight outfit being unable to cover the costs of travel and security signalled a new low for Italian football. The heartbreak for those Crociati supports given the fact that their fans still have continental triumphs fresh in the memory. 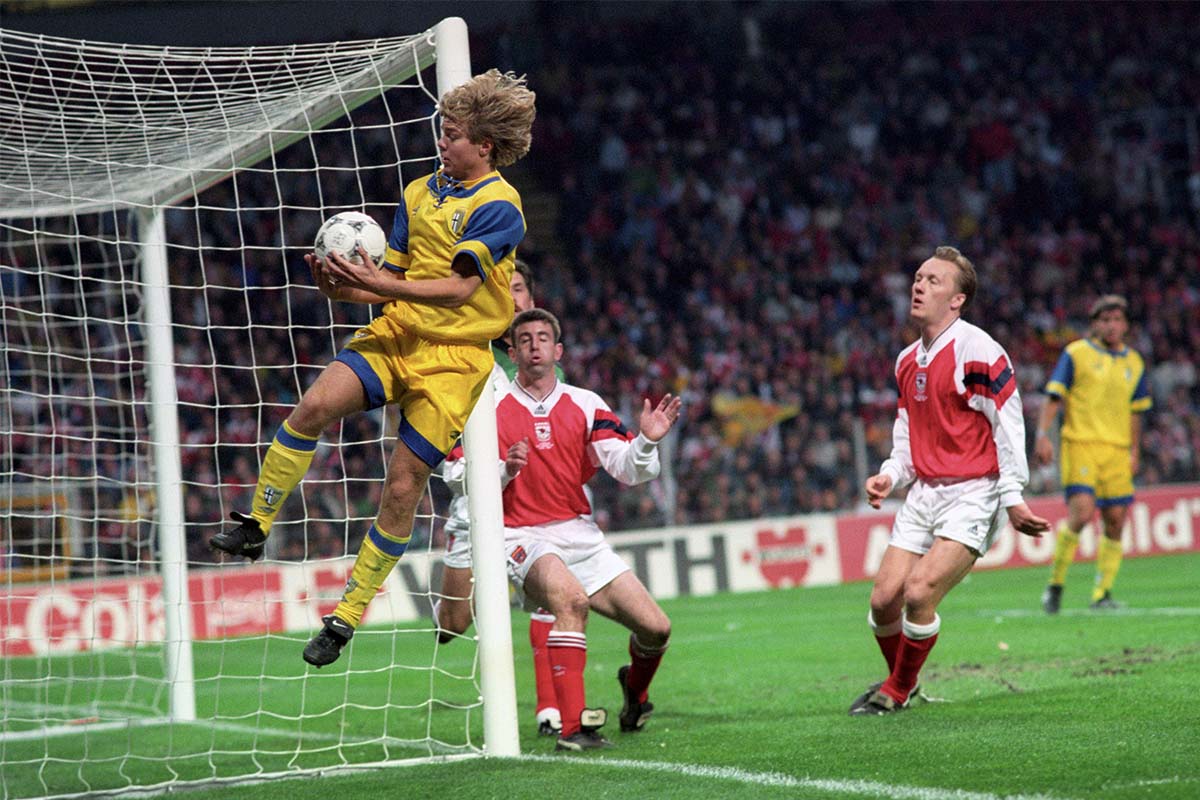 Just 20 years previously, Tomas Brolin and co led Parma AC to UEFA Cup victory. That was just one of several trophies in the early 1990s and, on the pitch, the club grew from strength to strength as the 20th century drew to its conclusion. Carlo Ancelotti had continued Nevio Scala’s good work to assemble one of Europe’s most enviable squads. Then, in the summer of 1998, Alberto Malesani completed those final touches to turn Crociati into a Coppa Italia and UEFA Cup double-winning outfit. With the likes of Gigi Buffon, Lilian Thuram, Juan Sebastian Veron, Hernan Crespo and Fabio Cannavaro in their ranks, Parma had been widely tipped to follow up those cup triumphs with a first ever Scudetto.

Sadly for Parma, league honours continued to elude Malesani’s men in spite of adding the likes of Marco Di Vaio, Ariel Ortega and Hidetoshi Nakata over the next couple of years. Another domestic cup would arrive in 2001-02; nevertheless, failure to break into Serie A’s top three would be considered unfulfilled potential and leave their fans feeling a little disappointed. But their pain was about to be amplified tenfold.

In footballing terms, Parma’s rise to fame since gaining promotion to the top flight in 1990 had been remarkably quick, especially as Italy’s top flight was largely accepted as the world’s best throughout this era. Unfortunately, their death would be a slow and painful process that would see them struggle behind the scenes for 11 years. Unsurprisingly, money would be the root of their downfall.

Financial strength had been the key attribute behind Parma’s on-field success throughout the 1990s;  the club was bought out by Italian dairy giant Parmalat shortly after their promotion to Serie A football and the heavy backing soon became the driving force as they lifted those domestic and continental cups. Likewise, those finances had enabled the club to recruit those stars like Brolin, Crespo and Nakata throughout that first decade of ownership. As the club grew, Parmalat saw their international stocks rise too, thanks in part to the advertisement links to the club. However, in 2003, the collapse of the dairy firm would signal the beginning of the end for the football club too.

Parmalat became entangled in one of the country’s biggest financial collapses ever. It was discovered that the company had racked up debts in excess of $20bn. This ultimately led to CEO Calisto Tanzi, owner of Parma AC being imprisoned for 18 years. The downfall of Parmalat and Tanzi ultimately saw the city’s football club fall into administration. On the pitch, Crociati went from being UEFA Cup qualifiers to relegation battlers in the space of a year. A relegation play-off win over Bologna saw the team, now officially called Parma FC, preserve it’s Serie A status in 2005, but turbulence behind the scene  continued to plague the club. 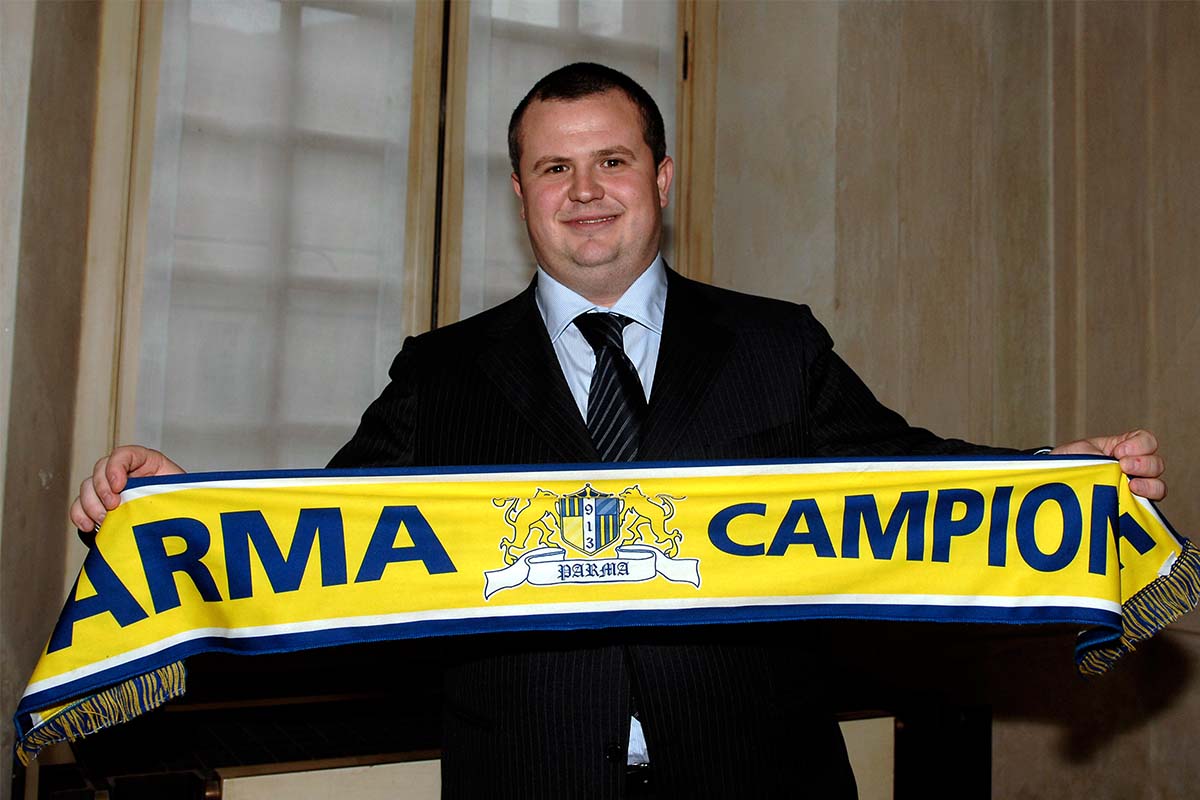 The club would finally be bought out in January 2007 as Tommasso Ghirardi paid $39m to end Parma’s spell of bankruptcy. On the face of things, the Serie A club had found its saviour. The businessman vowed to make the club sustainable. His input couldn’t help turn their fortunes around as they suffered relegation to Serie B, but the fact they bounced straight back to the top flight gave suggestion that the new Parma could become successful once more.

Ghirardi’s public image had won over the fans. Secretly, though, he was slowly but surely digging the Parma FC grave.

Following promotion, Ghirardi brought Pietro Leonardi in, firstly as general manager before promoting him to managing director. Again, the fans could have been quite optimistic about the appointment following Leonardi’s positive results at Udinese. Instead, he would be another key contributor to the eventual demise.

Hiring large quantities of players is fairly commonplace in Italy as many stars on any given club’s books will be loaned out to affiliates or foreign outfits. Even so, Parma had notably recruited an abnormally large number of playing staff. This certainly didn’t help the situation in the northern Italian city. More crucially, though, Ghirardi’s dishonesty was taking full advantage of relatively relaxed governing systems.

Ironically, the financial monitoring had only become more lenient towards clubs months after Ghirardi’s purchase of Parma. The financial climate of Italian football as a whole hadn’t been great. Torino, Napoli and Fiorentina had all hit bankruptcy at some stage in the past decade. Combined with the Calciopoli scandal, the overall image was pretty bleak. As such, the governing bodies changed rules so that clubs could be a little behind on staff (playing or otherwise) payments without facing major backlash. With player wages only needed on a quarterly basis to avoid punishment too, Ghirardi had an easy route to personal gain.

Ghirardi would manage to get away with running Parma into the ground for three full years before noise started to surface around the Stadio Ennio Tardini. However, the club’s triumphs on the pitch often papered over the obvious cracks in infrastructure. In 2013-14, Roberto Donadoni would lead the team to an unexpected sixth-placed finish. Meaning that Crociati had qualified for European competition for the first time under Ghirardi. Supporters may have been excused for believing that there would be bright times ahead. Their fortunes would change overnight; unfortunately, instead of getting brighter, the club was about to enter its darkest days.

The governing bodies ruled that the club could not compete in the following year’s UEFA Cup due to financial complications over unpaid taxes on players currently loaned out elsewhere. Ghirardi protested his and the club’s innocence over the matter. However, he quickly announced that the club was for sale, sending it on a slippery slope to its grave.

Over the summer, Donadoni saw his side ripped apart as Leonardi sanctioned the sale of star players. Parma had suddenly fallen from being top six contenders to relegation fodder, and there was nothing the coaching staff or remaining players could do to stop the rot.

A traumatic summer was reflected by a terrible start to the campaign on the pitch, and things took another huge turn for the worse as Ghirardi failed to make the quarterly payments in November, which would result in a one-point penalty for the club. Over the coming months, the severity of Parma’s situation would become even clearer as the staggering figures became public knowledge. Meanwhile, the growing debts prohibited the club from paying staff of both a playing and non-playing capacity. When those difficulties led to games being temporarily postponed, the proverbial tunnel descended into pitch black.

The circus behind Parma’s doors saw several short-term presidents come and go. The club were allowed to finish the campaign, but would’ve been relegated even without the point deduction that eventually became seven. With debts approaching the £300m mark, relegation on the pitch mirrored the situation off it. For the second time in 11 years, football mourned the death of Parma. Only this time, the repercussions would be much worse. Unlike Parma FC, the reformed Parma Calcio 1913 would need to start life way down in Serie D.

On a brighter note, the new club, which is chaired by former coach Scala, is on course for promotion in its first season. But sadly, the golden generation that we loved around the turn of the century is nothing more than a faded memory.

The death of Parma can be attributed to a combination of bad luck, bad ownerships and bad people. Once again, it’s another high profile showing of money as the root of evil. Tragically, it’s the genuine supporters that have suffered most.