Vincenzo Montella has a huge decision to make on Wednesday night, and not only will it impact Sevilla‘s battle with Manchester United but it could have a knock-on effect for the summer.

In both La Liga and Champions League, Wissam Ben Yedder is the top scorer for the Spanish side. But under the new boss, who took charge after Los Rojiblancos qualified from the group stage, the French striker has found his minutes reduced.

Montella, perhaps due to Luis Muriel’s time in Italy, has preferred to play the Colombian hit-man. However, the 26-year-old has scored just twice in his last nine La Liga appearances.

Rather than blowing Ben Yedder out the water, the former Sampdoria forward, who didn’t start in any of the six Champions League group fixtures, has an inferior record in front of goal.

Last week Muriel spoke of the confidence Montella has given him. After arriving for just under £20million, he felt anxiety over the pressure of the large fee.

“I never stopped working, I persevered and knew that the reward for my work would come,” said Muriel. “I never lowered my guard, I kept fighting and working and in the end I got the results I wanted.

“The arrival of Montella was important, the trust he placed in me gave me peace of mind.”

Going into a key first leg clash with United, the Italian boss needs to pick between his two forwards. But leaving Ben Yedder out of the starting XI for another key fixture could be enough to force him out of the club.

Usually set-up in a 4-2-3-1 formation, it would be a gamble for Montella to play the more offensive 4-4-2 they used against Eibar, especially as they lost 5-1 to one of La Liga’s surprise success stories.

Both strikers' playing time was split in the last two league games, but it was Ben Yedder who scored as Sevilla picked up a much-needed 1-0 victory over Las Palmas at the weekend.

However, resting the Colombian points towards Montella giving him the nod on Wednesday, especially after the French forward was dropped from the recent Copa del Rey semi-final win over Leganés.

With a chance to reach a cup final, not playing the former Toulouse forward was a sign of Montella’s distrust.

But Ben Yedder has 12 goals in 22 La Liga and Champions League appearances this season. Regardless of how the former Roma boss feels, when it comes to the big European nights, the 27-year-old has proven himself. Muriel has flattered to deceive.

Starting the Frenchman would give the Spanish side someone to spearhead their attack.

Although he is small, he is excellent with his back to goal and can take the ball into feet. Before breaking through at Toulouse he was a star in France playing futsal and he uses that skillset to his advantage.

Having a low centre of gravity makes him difficult to knock off the ball and his time spent as a creative force behind the attack gives him the ability to bring others into play and pick the right pass.

Excellent with both feet, Ben Yedder can beat defenders, bamboozling his markers before looking to fire off a shot. 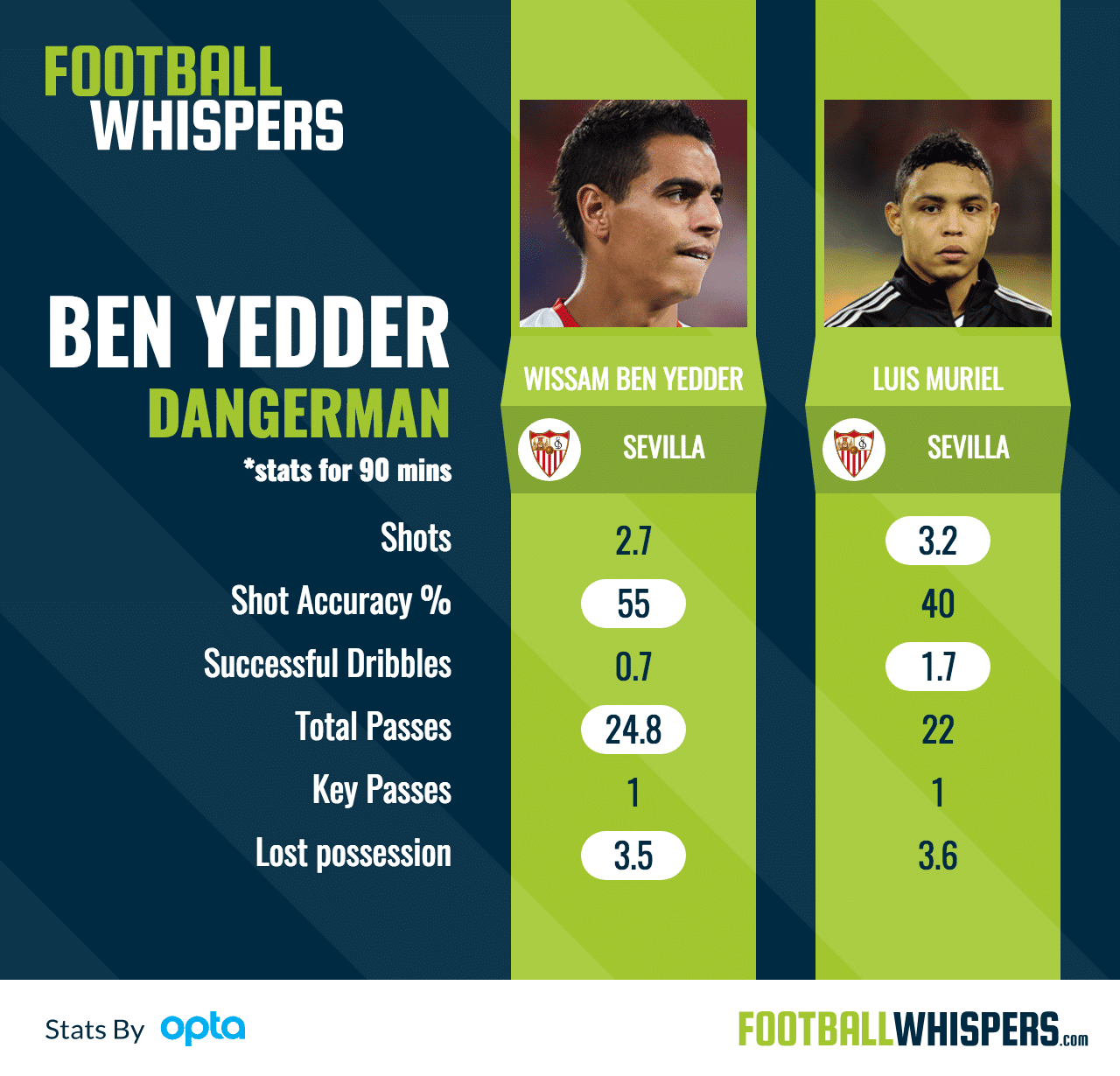 Although the Colombian attempts more shots, he also fires more off-target. Ben Yedder manages to hit the target with 55 per cent of his efforts. And when you are playing Manchester United at home, you need to show an attacking threat. It’s not good enough to just wait to hit the Red Devils on the break.

The diminutive Ben Yedder makes intelligent runs down the channels, looking to pick the ball up, invite defenders in close before skipping past outstretched legs and creating a half-yard for a shot.

Muriel is a powerful runner and he stretches the back line with his work rate and movement. – he would be the much more dangerous option for the second leg at Old Trafford.

With the Premier League side obvious favourites, they will control the game. Sevilla will need more pace on the break and the Colombian is perfect in that role.

However, on Wednesday, as Sevilla hope to improve on past results, possibly taking a lead to England, they would benefit greatly from the intelligence and instincts Ben Yedder showed against Liverpool in the group stage.

At the Ramón Sánchez Pizjuán Stadium, Ben Yedder's well-timed run to the near post allowed him to flicked on Ever Banega’s free-kick past Loris Karius. It sparked their sensational comeback.

Even at Anfield, he was sharp and switched on in the penalty area, able to pounce on a rebound to give the away side an early lead.

Ben Yedder loses the ball less than Muriel and gets himself more involved in the game, even completing a higher percentage of passes each game.

Not using the Frenchman will be stubborn from Montella. He may not think the 27-year-old is the forward to lead his attack, with stories coming out on deadline day of a possible departure.

However, Ben Yedder is still there and his goal-scoring record is the best Sevilla have. It would be a waste not to use him.

No one else in the Spanish side has scored more than once in the competition this season. Ben Yedder has the tools any team would look for at this stage, now it’s up to the Italian to forget his pride and make the right decision.