Since reports emerged on Sunday to suggest Liverpool had struck a deal with Lyon to sign Nabil Fekir in the summer, the Frenchman has been the hot topic of conversation.

Canal+ and RMC Sport claim the Reds have agreed to part with £62million to bring the versatile attacker to Anfield, making him the club's second-most expensive player in their history. With the deal seemingly on the table, despite what Fekir's father says, a lot of talk has centred around where the Lyon No.18 would fit into the Liverpool team.

His versatility means he can play a number of roles. He could be Jürgen Klopp's new Swiss army knife. The 24-year-old can operate as an attacking midfielder as well as a wide forward. Given the way the Liverpool boss sets his midfield up, which sees one of the midfielders given license to roam and link up with the attack, the France international could also play there, too.

It's a role Adam Lallana played during the 2016/17 season and one Philippe Coutinho was used in fleetingly prior to his January move to Barcelona, before Alex Oxlade-Chamberlain took up that mantle. Given Liverpool dominate the ball for large parts of the game, these players aren't tasked with doing much defensive work and can instead have an impact in the final third.

That's the role many fans see him playing if he moves to Merseyside. As discussed in a detailed profile, Fekir can replace Coutinho's creativity and Oxlade-Chamberlain's dynamism in midfield. While that may be a factor in Liverpool looking to sign the French maestro, what if he's also been targeted to fill the difficult second striker problem?

Roberto Firmino has developed into one of the most complete forwards in Europe this term. He's been involved in 40 goals this season and he's found the back of the net 26 times. His off-the-ball work is what makes him such a key cog to the way Klopp sets the team up, but the flurry of goals has been a welcomed addition to his game. The drop-off in the quality on show when he's rested is glaringly obvious.

Danny Ings is a grafter but he's not in Firmino's league, while Dominic Solanke is still raw and needs games to develop. Any youngster arriving would have the same problem as the latter, while most forwards who are better than former wouldn't be content with a place on the bench. The second striker situation is one that plagues most top teams. 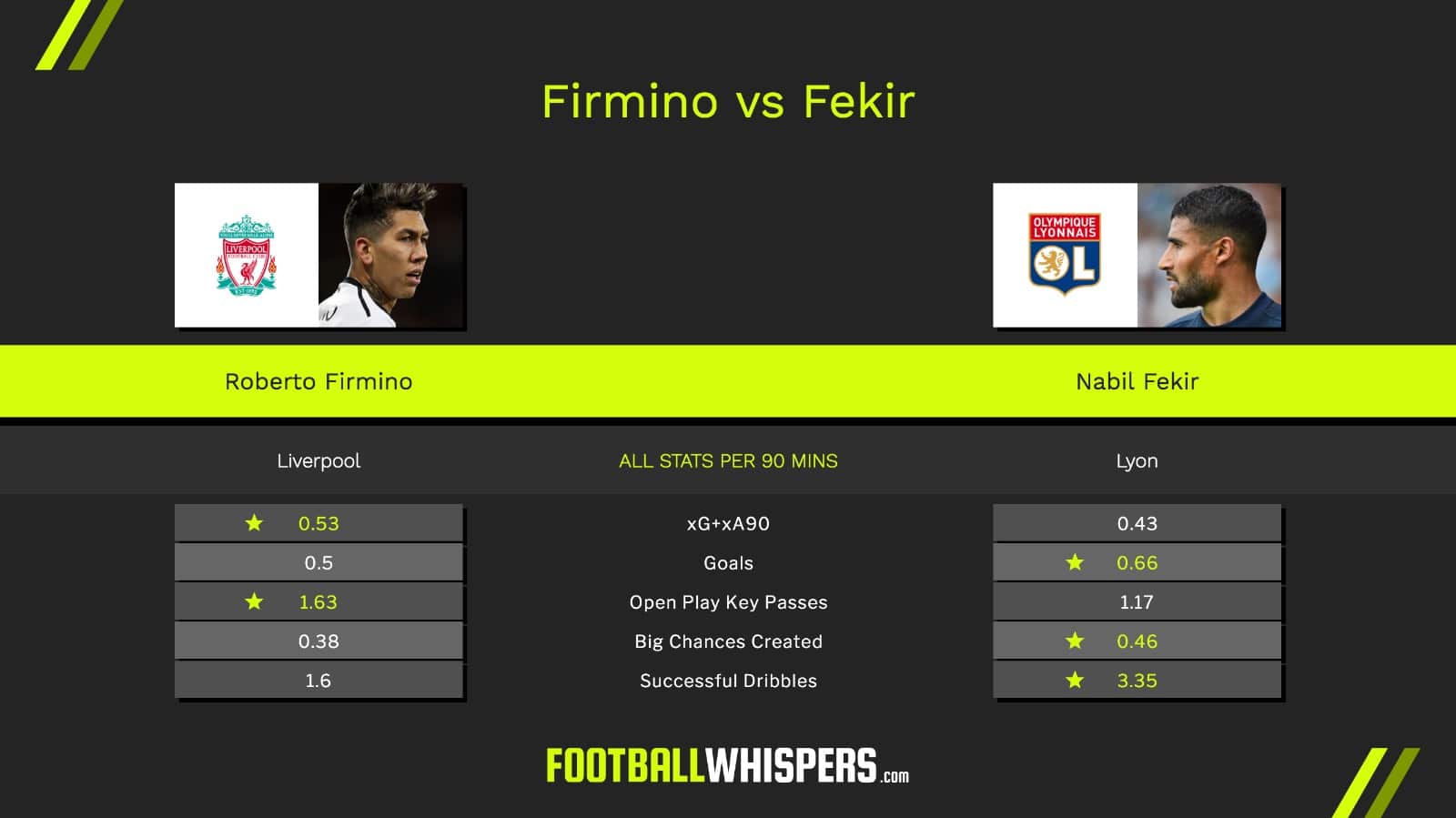 But in Fekir, Liverpool might have found the perfect solution. As shown in the graphic above, the Lyon man scores more goals per 90, he creates more big chances and he completes more dribbles. He's a goalscorer and a creator – just like Firmino.

The Frenchman can't match his Brazilian counterpart in terms of expected goals and expected goals assisted, open-play key passes as well as tackles and interceptions per 90 – but not by much in any category.

Lyon often use a high press with the focus being on winning the ball back in the opposition's half. Fekir is well trained in pressing triggers and cutting off passing angles, meaning he could, in theory, do the job Firmino does for Liverpool. 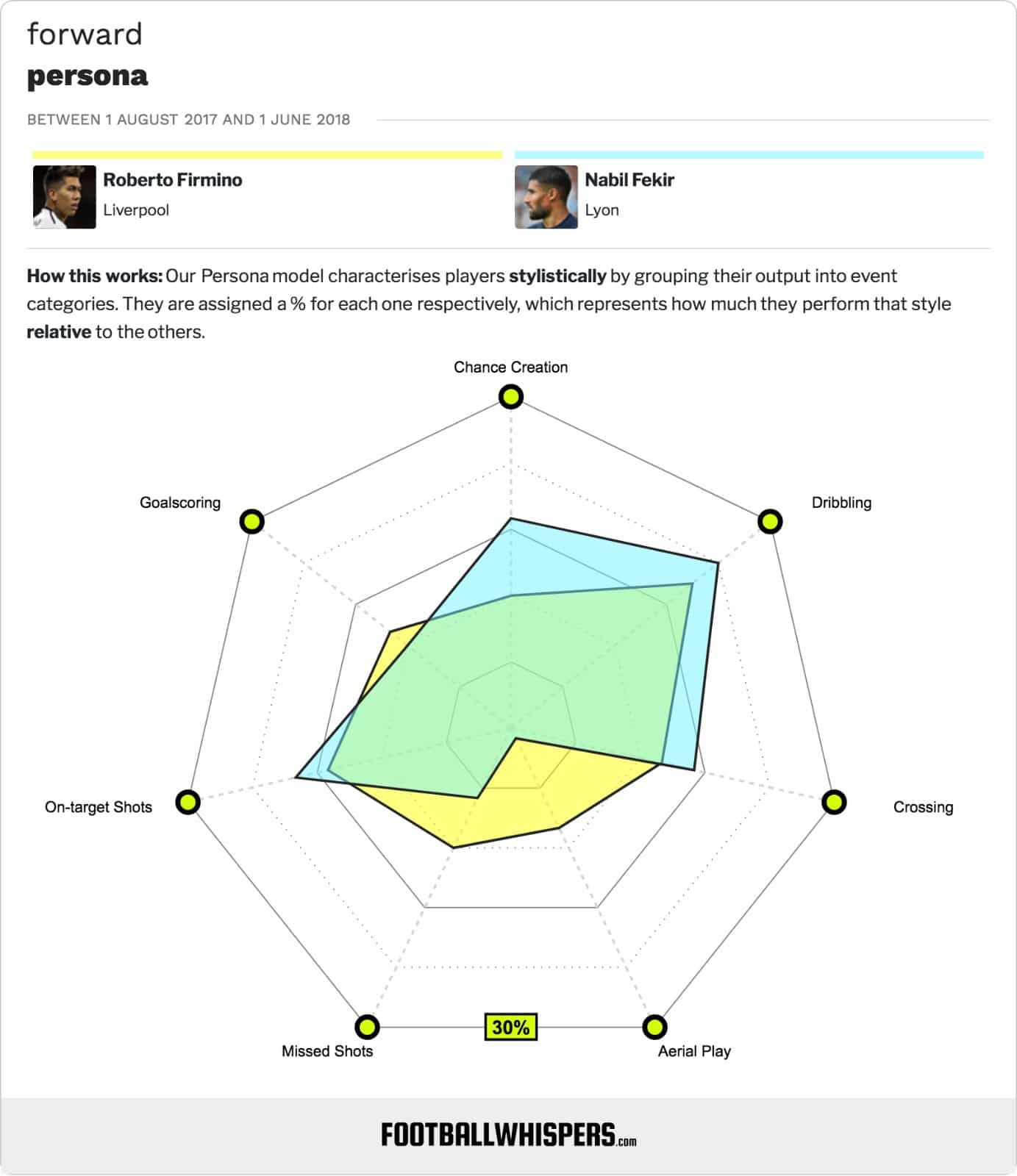 The persona model, which is exclusive to Football Whispers, looks at the playing style of players. In the graphic above it's comparing Firmino in yellow to Fekir in blue. They're more similar than most would have imagined.

Furthermore, both score the majority of their goals inside the penalty area. They're not poachers but, considering they do so much work for their respective teams outside of the box, it shows the two players share a knack for being in the right place at the right time.

The Brazilian misses more shots and is more of an aerial presence, while the Lyon forward continues to create despite his goalscoring exploits. The transition might not be completely seamless, with the Premier League differing to Ligue 1 – just look at how long it took Alexandre Lacazette to acclimatise. But the persona model paints a picture of a player who, when he's found his feet, could fill in for Firmino as the focal point of the Liverpool attack.

If the move comes to fruition, the £62million fee might seem like a bargain down the line if it means the Reds are able to rest their most important attacker without a noticeable drop off.