The Billy Goats are making the trip to SC-Stadion to take on the challenge of Freiburg on September 11. Cologne will be looking to address their woeful record against the Vultures and jolt their European aspirations in this Bundesliga encounter.

Cologne has started the current campaign brightly, putting their playoff survival in the rearview mirror. Last season's nightmares will haunt them, especially as they make the trip to SC Stadion, where they faced their first of two defeats to Freiburg. Christian Streich's men will not have forgotten their 5-0 victory over the Billy Goats and will want a similar result to continue their unbeaten start to the campaign.

In their last two duels, there were ten goals scored with each competitive outing five goals. Last time around, Freiburg saw the same number of goals in their come from behind victory over Stuttgart. Cologne proficiency to be involved in high scoring affairs remains strong as all four of their competitive outings have concluded with an Over 2.5 goals scoreline.

Cologne only scored once in their doubleheader last season but seem rejuvenated under Steffen Baumgart. They have scored seven goals already but have been jinxed on the opposite end with five goals conceded. Freiburg will be looking to capitalize on their backline issues that remain to be addressed. They have only scored five goals so far but if they were to reprise their last season's heroics, that tally could double at the end of this Bundesliga meeting.

Freiburg vs Cologne: Check out the best odds and the latest stats

Match Preview of Freiburg vs Cologne

As it stands, Christian Streich's men are having their best start to a Bundesliga campaign since the 2005/06 campaign. They can further improve stretch this run and enter the history books with a win over Cologne. The Billy Goats were taken to the cleaners across their two meetings last season and the Vultures will have a similar target on their minds as they take the SC Stadion pitch.

Steffen Baumgart will be well aware of Cologne's miseries last season and the still physical and mental challenge he has on his hands. Not only does he have to condition his players on the pitch but also overcome the psychological challenges accrued over the turbulent last season. Chief of this will be against Freiburg, who scored nine goals against them the last season.

Questions About the Freiburg vs Cologne 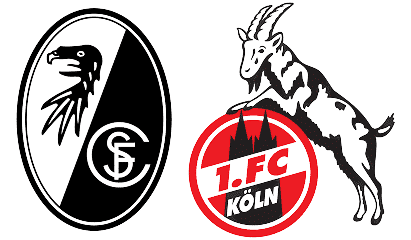 Where is the game being played? SC Stadion.

Which team is the favourite to win? Freiburg.