After a solid first half of the Bundesliga campaign, Freiburg kick-off 2022 with a visit from Arminia Bielefeld. Both sides finished 2021 with important victories to their names and will want a similar result at the start of the second half of the campaign.

The last three meetings between Freiburg and Bielefeld all finished with less than three goals. For Bielefeld, this has been the norm of late with their last five fixtures concluding with Under 2.5 total goals scorelines. This has not been the case for the Vultures, who have only seen one of their last five fixtures finish in this manner. With 10 and 5 goals scored between them in this period, it should be a low scoring affair at the Europa-Park Stadion.

Goals do not come easy for both Freiburg and Bielefeld. The Vultures have maintained their position thanks to their defensive excellence, while the Blues are struggling without it. Interestingly, Freiburg arrives with two of their last five fixtures seeing both sides score. For Bielefeld, four matches in this period have seen just one side score, the other being a 1-1 draw. As they face off against each other, it is easy to put our confidence behind one team scoring.

Freiburg vs Bielefeld: Check out the best odds and the latest stats

Freiburg vs Bielefeld: Check out the team lineups

Christian Streich's tenth year in charge of SC Freiburg is turning into a revelation. They are enjoying their best finish to the first part of the season and can realize their Champions League qualification ambitions. Earlier in the season, they had relied on their defence to lead their charge but now their attackers have joined the fray as well.

It has not been an easy season for the Arminia Bielefeld faithful and with good reason. The squad is languishing in relegation slots and the threat of going down is real. However, they finished the first half of the campaign with successive victories, giving themselves a fighting chance for survival.

Questions About Freiburg vs Bielefeld 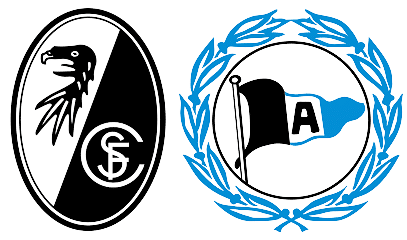 Where is the game being televised? Sky Bundesliga, and Viaplay.

Where is the game being played? Europa-Park Stadion.