Following their 0-0 draw with Mainz, Freiburg have conceded the joint-second best defensive record in German top-flight this season. They host Augsburg at the Dreisamstadion in their bid to continue their impressive accomplishments at the back.

Here are our predictions for Freiburg vs Augsburg.

Alongside Bayern Munich and Wolfsburg, Freiburg are the only team in the Bundesliga yet to taste defeat this season. On the other hand, Augsburg are tricky visitors as they arrive on the back of a 1-0 win over Borussia Monchengladbach. We are backing the Vultures to claim the three points on offer as Augsburg have suffered two defeats in their last three trips to the Dreisamstadion.

With two defeats accrued, Augsburg are underdogs in a fight that can be a close call. They have only scored twice in their last three matches, two less than Freiburg in the same period who played a goalless draw last time out. Goals have always come at a premium when these two teams have met as evidenced by Under 2.5 total goals in their last four meetings.

Augsburg made the trip to the Dreisamstadion in March this year and failed to trouble the scorers in a 2-0 beating. They have only two goals scored in their last three meetings in this Bundesliga campaign. Freiburg does not have a rich pedigree of scoring but are more renowned for their defensive acumen that sees them as the joint second-best defence in Germany. Given the poor scoring efficiency of both sides and the Vultures defensive solidity, we do not expect both sides to be represented on the scoreboard in this fixture.

Freiburg vs Augsburg: Check out the best odds and the latest stats

Match Preview of Freiburg vs Augsburg

Christian Streich did not oversee the best summer transfer window with just one addition to his numbers. However, this has not stopped him from forging Augsburg into a defensive powerhouse. With just four goals conceded, they have managed to keep their unbeaten streak in the Bundesliga, frustrating their rivals and doing just enough in the opposition's third to scrape by.

The same can also be said about visiting Augsburg, who are four points shy of their hosts. The Fuggerstädter's have conceded eight goals, all of which came in two results. They have also accumulated two draws and got their first win of the 2021/22 campaign with a 1-0 win over Borussia Monchengladbach. With just one goal conceded in their last two outings, they will hope to match Freiburg's astuteness at the back.

Questions About Freiburg vs Augsburg 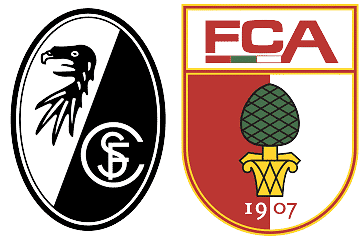 Where is the game being played? Dreisamstadion.

Who are the players to watch? Woo-yeong Jeong (Freiburg) and Florian Niederlechner (Augsburg).