The recruitment team at West Ham United have cast their eye across London on several occasions over the past year. Usually it's been to the west with their focus specifically on Fulham.

Whites boss Slaviša Jokanović was linked with a switch to the London Stadium at the end of last season. Fulham captain Tom Cairney was then subject of a bid from the Hammers in the January transfer window.

West Ham failed to land those two men from the West Londoners, but they may have more luck with the next Fulham star on their list – Ryan Fredericks.

Well-connected West Ham Twitter account, @ExWHUemployee, who broke Patrice Evra's signing, claims a deal to bring the right-back in at the end of the season is close to being agreed.

The 25-year-old is yet to sign a new contract at Fulham despite one being on the table for several months. He is free to leave this summer and is keen on securing a Premier League move.

The Hammers appear to have won the race for Fredericks but what will he bring to the Irons? We've run the rule over the Fulham left-back.

After growing up in Potters Bar, Fredericks progressed through Tottenham Hotspur’s academy and signed his first professional contract in 2010.

His first game for Spurs came in August 2011 against Hearts, where he played 61 minutes of the Europa League tie on the right-hand side of midfield.

Fredericks then had a brief loan spell at Brentford in 2012 before disappearing from first-team action until December 2013, when he started against Anzhi Makhachkala and won a penalty which was dispatched by Roberto Soldado.

January 2014 saw him join Championship side Millwall on loan, making 14 appearances and scoring once from right-back, which became his regular position.

That temporary spell away from White Hart Lane attracted attention from Middlesbrough, but injuries restricted his loan spell during the 2014/15 season to just 17 league appearances.

After returning to Spurs in the summer of 2015, he left permanently, joining Bristol City on a three-year contract.

Despite his appearances at right-back, he played both as a left winger and a right winger for the Robins, but after just 26 days at the club and five appearances, he decided to return to London for personal reasons, joining Fulham on August 31.

Since then, he’s gone on to prove himself as one of the best right-backs in the English second tier, making more than 90 appearances for the Whites in the league, and being a crucial part of their promotion pushes both this season and last.

Despite his attacking nature, he is yet to score since arriving at Fulham though.

What are Fredericks’ main strengths?

There’s no doubt what Fredericks’ strongest attribute is – his pace. It’s no surprise that when he was growing up he was district champion in the 100m and the triple jump.

In a Fulham team where attacking full-backs are key outlets, the 25-year-old is the ideal player.

He flies up and down the wing and is more than comfortable at taking on the opposition left-back – Cyrus Christie and Ola Aina are the only other Championship right-backs to have completed more than his 1.7 dribbles per 90 minutes this season.

And if there’s a high defensive line, once Fredericks is on the run, he can easily expose it.

You can see just how dangerous he can be in the stills below, taken against Bolton Wanderers. 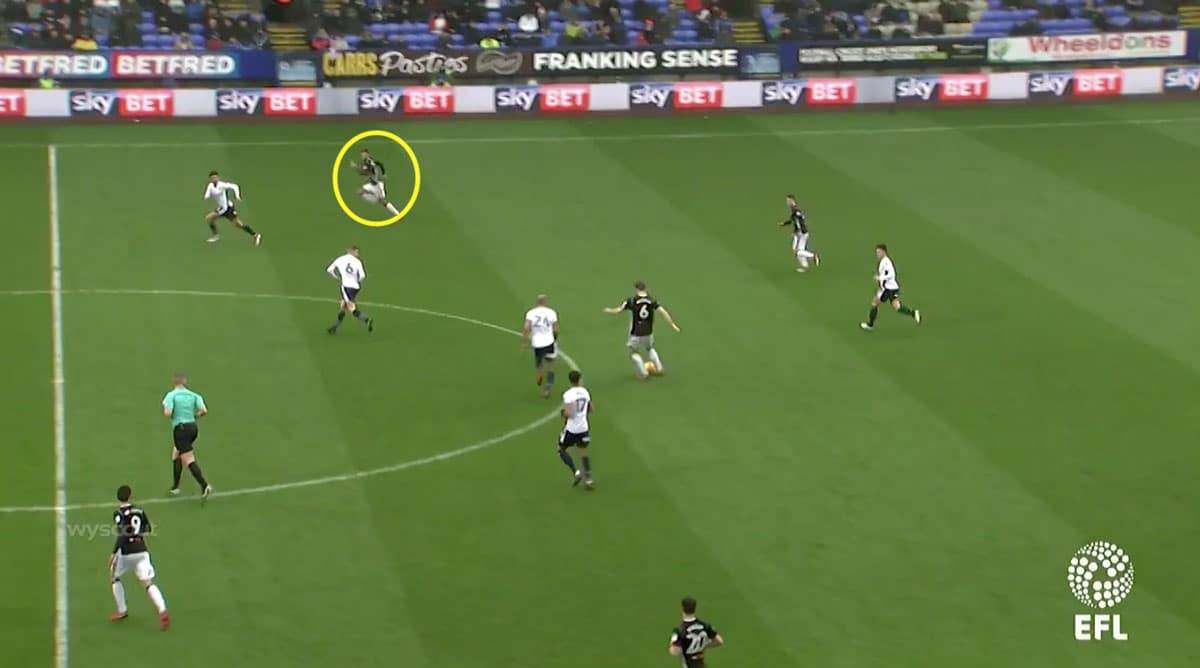 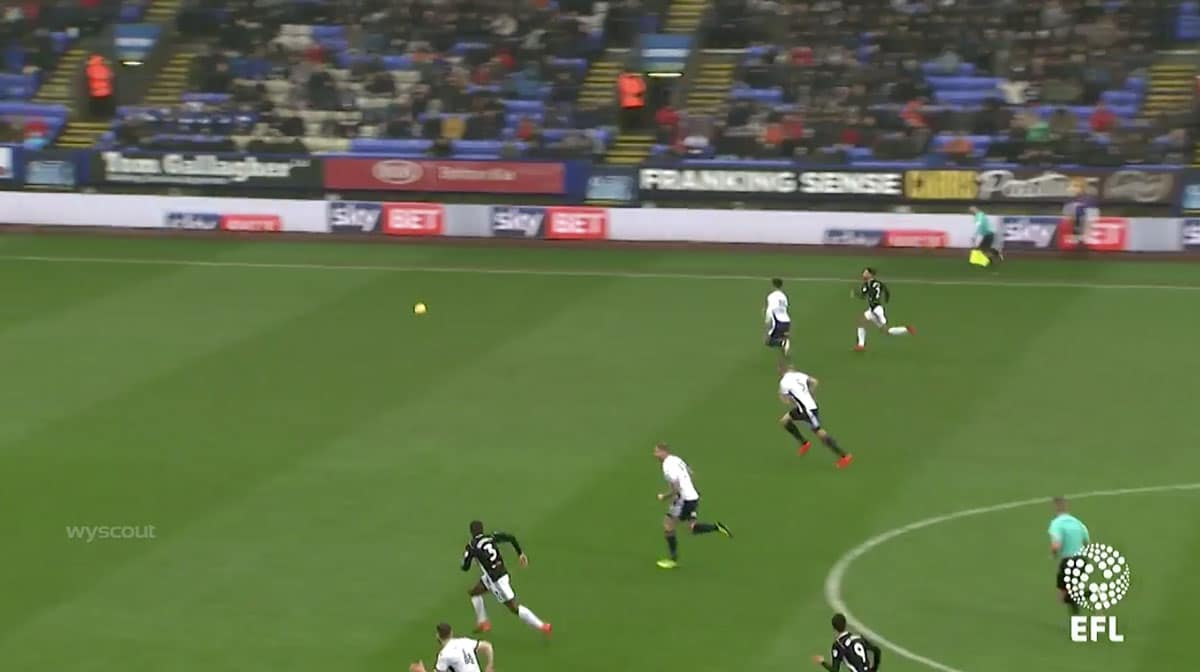 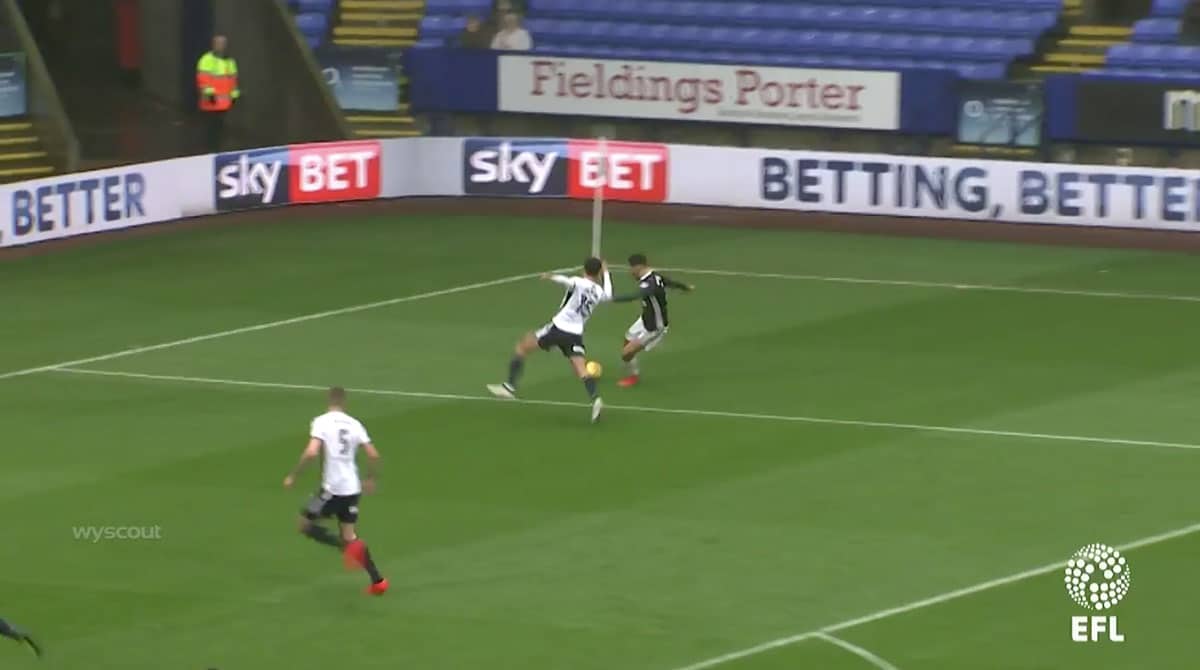 When Kevin McDonald picks up the ball for Fulham in his own half, Fredericks starts his run knowing he can get in behind Bolton left-back Antonee Robinson.

The American isn’t slow, but as you can see in the three stills above, the Fulham No.2 easily outpaces Robinson and is able to put a dangerous ball into the box.

Another key part of Fredericks’ game is playing the ball inside and using his speed to bomb down the line and take a defender out of the game. 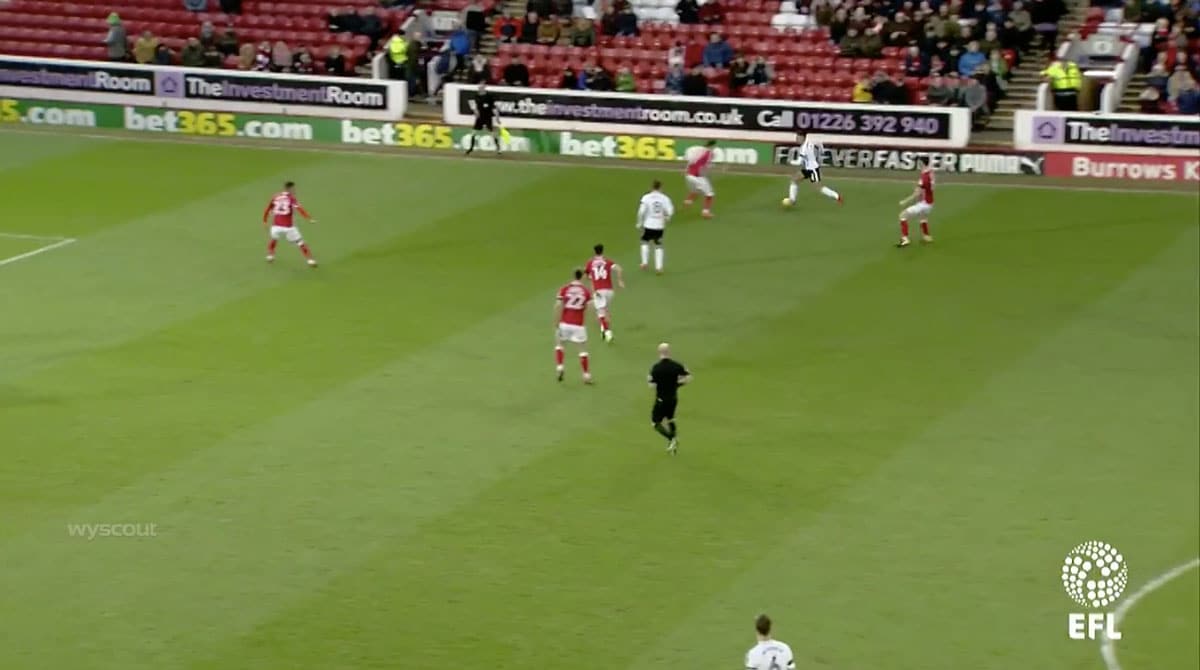 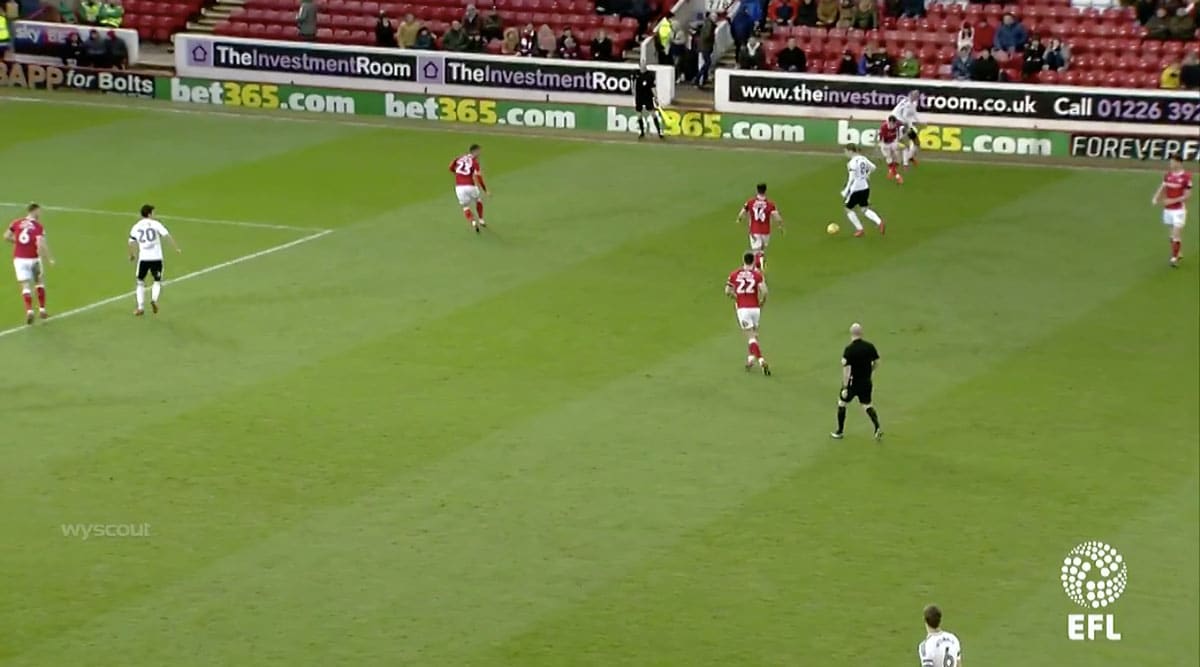 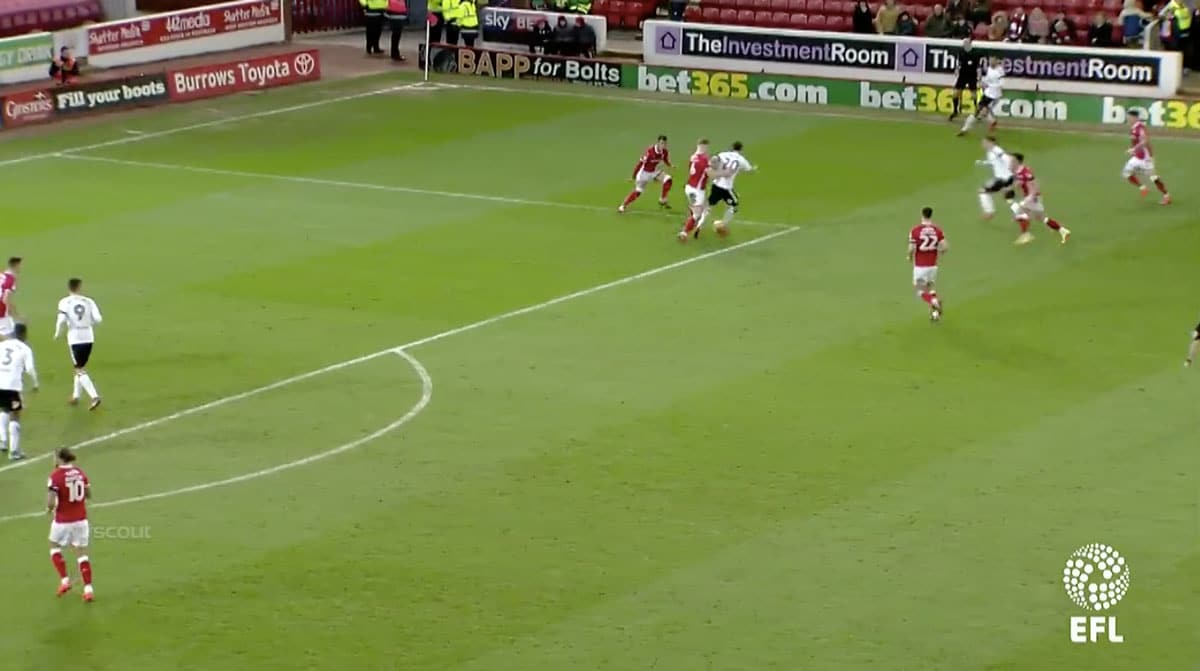 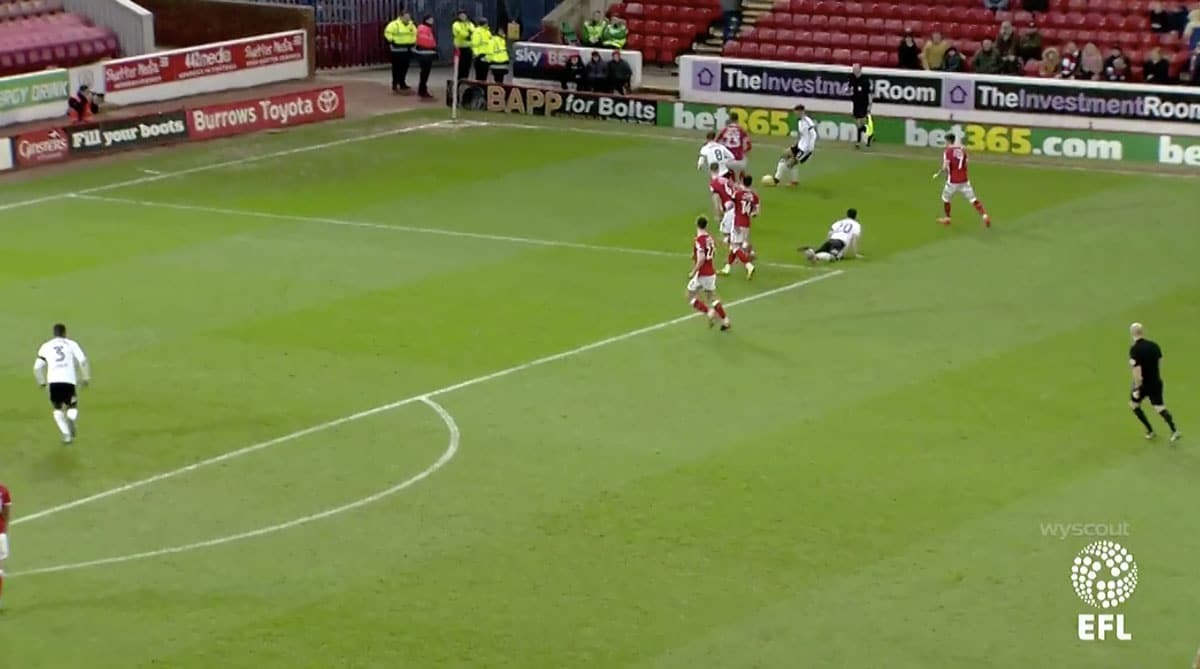 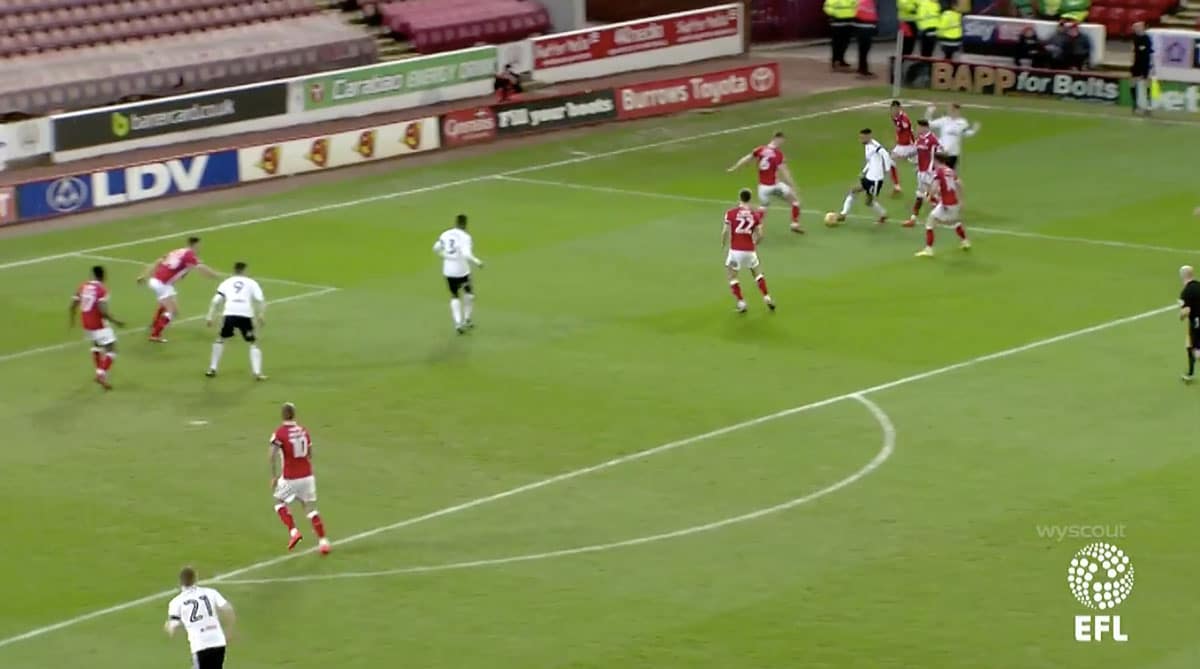 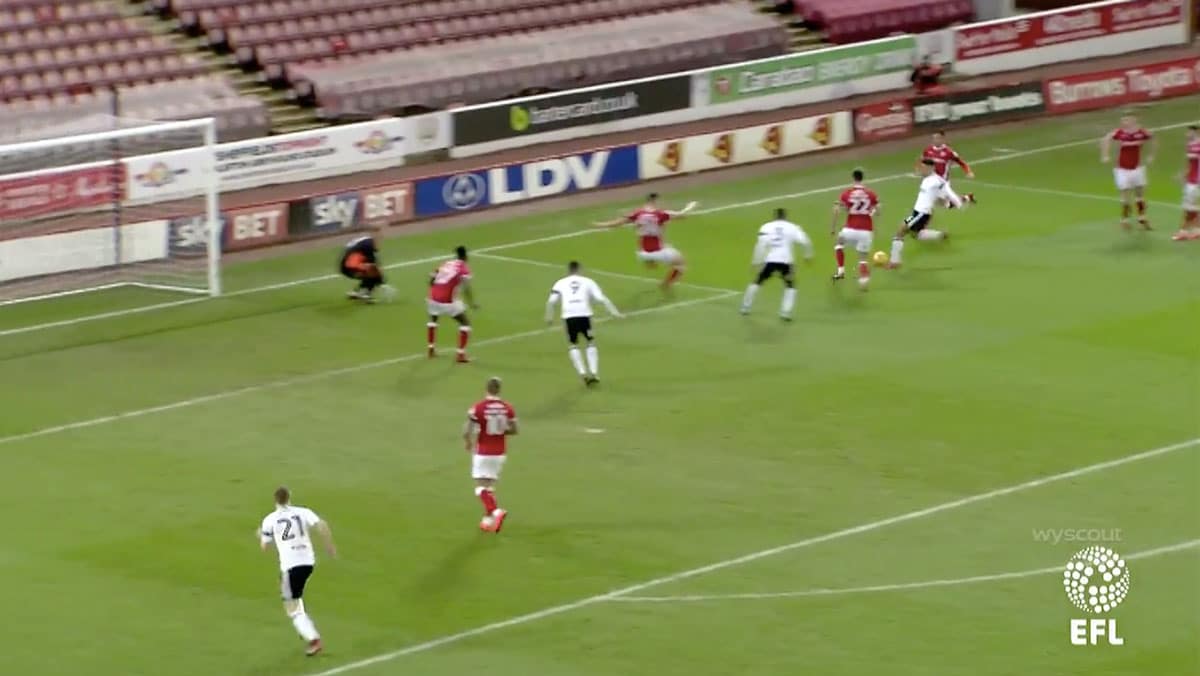 In the stills above, Fredericks picks up possession on the right before playing it into Stefan Johansen and continuing his run down the line.

The ball finds its way back to the former Spurs youngster, via Lucas Piazon, and his attacking qualities as a former winger come to the fore. He nutmegs two Barnsley players before getting a shot away that hits the post.

Fredericks was unlucky not to score what would have been one of the Championship goals of the season.

Importantly, his pace can also be a key factor in getting back into defence when caught high up the pitch. And while a previous criticism of Fredericks was that his final product in attack wasn’t good enough, his seven assists this season proved his doubters wrong.

What are Fredericks’ main weaknesses?

While his defending has noticeably improved since he’s been at Fulham – he's making fewer tackles per 90 minutes (from 3.5 when he started to 2.1 per 90 now) due to much-improved positioning – Fredericks isn't the full-back a club want if their sole aim is to sit back and soak up pressure.

He gets beaten in the air often, winning less than half of his aerial duels this season – just 42 per cent – and while his speed is a bonus, it can mean he clatters into an opponent as he attempts to get back when an attack breaks down.

It's why he's been booked more times than any other Fulham player this season, with eight Championship yellow cards.

And for a full-back who goes forward, he does, at times, panic when he passes the halfway line.

He should really be a bit more of a goal threat. The right-back is yet to score for Fulham despite being there for two-and-a-half seasons.

He needs to improve on his shooting, averaging 0.6 per 90, but with just 0.1 of them being on target.

How much is Fredericks worth?

When Fredericks was a Swansea City transfer target in January, a fee of around £3million was mooted.

However, West Ham could sign Fredericks on a free transfer at the end of the season, with his contract set to expire.

The fact Fulham bought in Christie from Middlesbrough on deadline day last month suggests they’re preparing for Fredericks’ departure as they now have two of the best right-backs in the Championship.

While the Hammers may already have two decent options at right-back, Sam Byram has missed 32 matches through injury since the start of the 2016/17 season.

Meanwhile, at 33, Pablo Zabaleta can’t be relied on every week, which means Fredericks would offer another option for David Moyes.

His pace in wide areas would offer West Ham something they don’t currently have from deeper positions, and while it may be a step up, Fredericks is impressing in the Championship and is worth taking a chance on.

West Ham would hope he can replicate the impact of former Fulham full-back Scott Malone, who hasn’t looked out of place since stepping up to the Premier League with Huddersfield Town.

On a free transfer, signing the 25-year-old is a no-brainer.