For more than a decade now, Shakhtar Donetsk‘s modus operandi in the transfer market has been to sign some of the best young talent from Brazil, develop them and then sell for a hefty profit.

The former Internacional standout, who has four senior caps for Brazil, looked set to join  Manchester City next summer.

“Shakhtar Donetsk's best player is Fred in the centre of midfield,' said Mircea Lucescu, the former coach of the Ukrainian club said earlier this year. “He was a bit anarchic on the left. I moved him in front of the defence.

“He will go to City like Fernandinho before him.”

But The Times is reporting City are cooling their interest, and like former target Alexis Sánchez, Fred could join Manchester United instead.

Twice a Campeonato Gaucho champion with Internacional in Brazil, Fred was snapped up by Shakhtar in 2013 for €15million.

The 25-year-old has been a regular with The Moles ever since, helping them to two league titles, two domestic cups and three Super Cups, as well as featuring in both the Champions League and the Europa League.

In 2015, an injury to veteran defensive midfielder Luis Gustavo saw Fred drafted into Brazil's squad for the Copa América, where he assisted the Seleção on their run to the semi-finals.

Fred recently served a suspension after testing positive for diuretic hydrochlorothiazide, discovered in a sample he provided during the 2015 Copa América.

Initially, he was banned for one year by South American federation Conmebol, with the punishment only relating to games on the continent. But FIFA last year decreed that Fred's suspension should be extended worldwide, keeping him out of action for the second half of last season.

Despite this indiscretion, interest in the young midfielder remains extremely high, such is his talent, youth and apparent propensity for future development.

What are Fred's main strengths?

When it comes to the duties of a central midfielder, Fred can do it all. A gifted passer off either foot, he is able to break the lines of the opposition either via incisive through-balls or powerful dribbles. The Brazilian is also defensively aware, often seen sprinting back towards his own goal to break up play, compensating for the errors of team-mates.

The ex-Internacional star is at his best with the ball at his feet and options ahead of him. 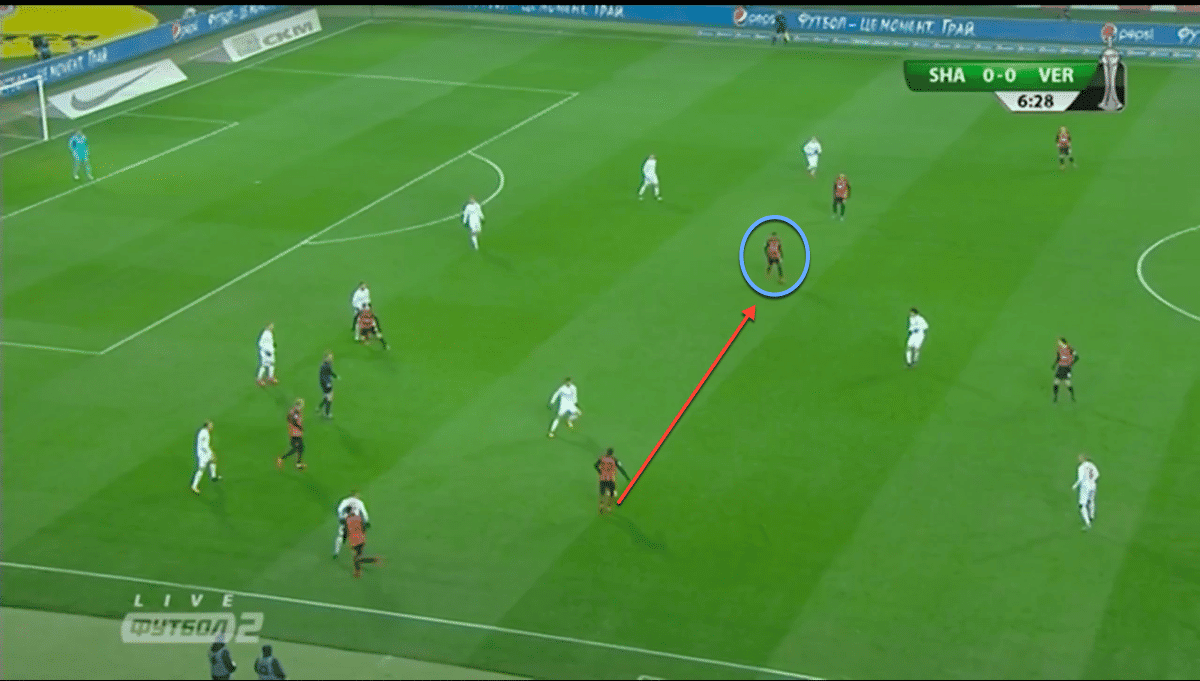 In the above image, taken from a recent domestic outing for Shakhtar against Veres Rivne, we see how Fred has astutely managed to find a pocket of space on the edge of the attacking third, making himself available for a pass. 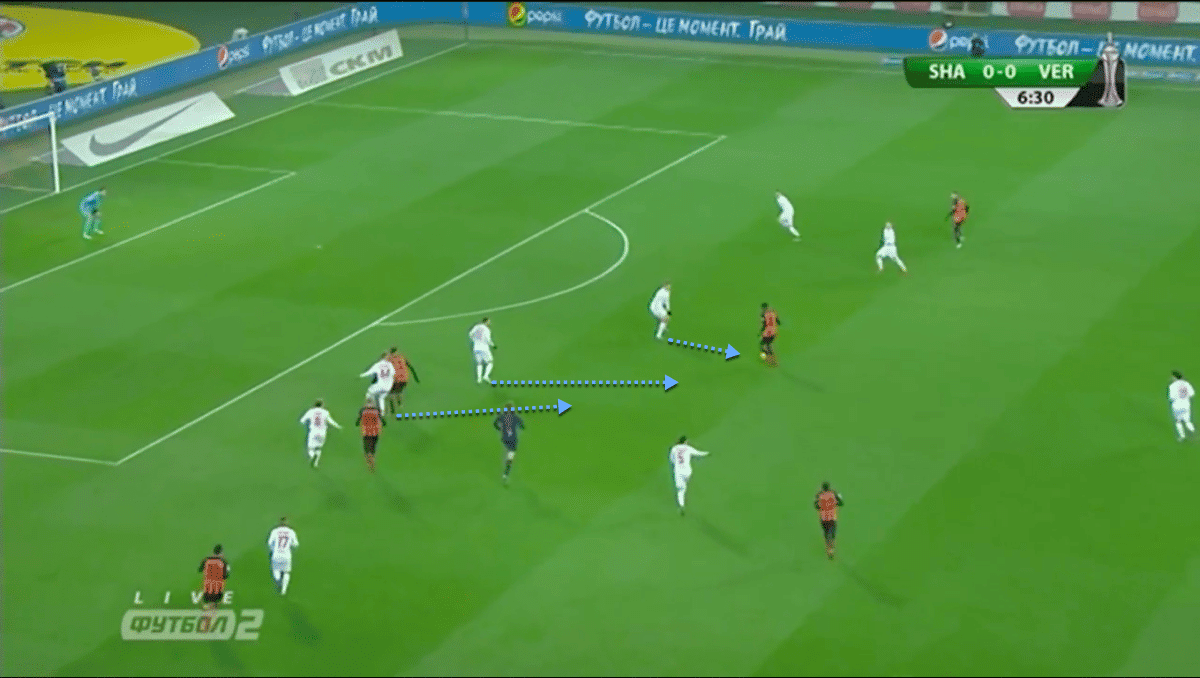 When he receives the ball, Fred draws three Veres players toward him, such is his threat in this position. In doing so, the Brazilian's mere gravitational pull creates space in and around the penalty area for colleagues. 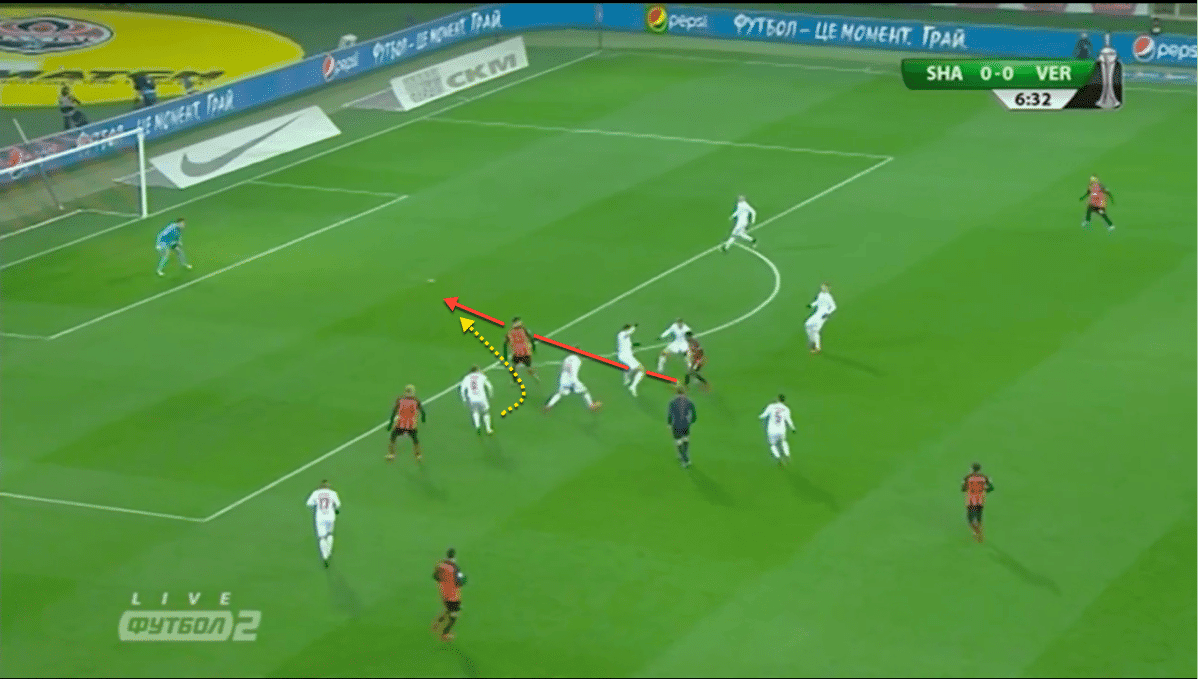 Weaving the ball through three Veres defenders, Fred expertly picks out the run of the now-unmarked Facundo Ferreyra, playing the Argentinian striker through on goal to score.

Fred's standout attribute is unquestionably his dribbling. In the Champions League this term, the midfielder has averaged an impressive 3.3 take-ons per 90 minutes, at a staggering success rate of 95 per cent. And it's not as though Shakhtar were fortunate in the group stage draw – they have had to face off against Napoli and Manchester City. 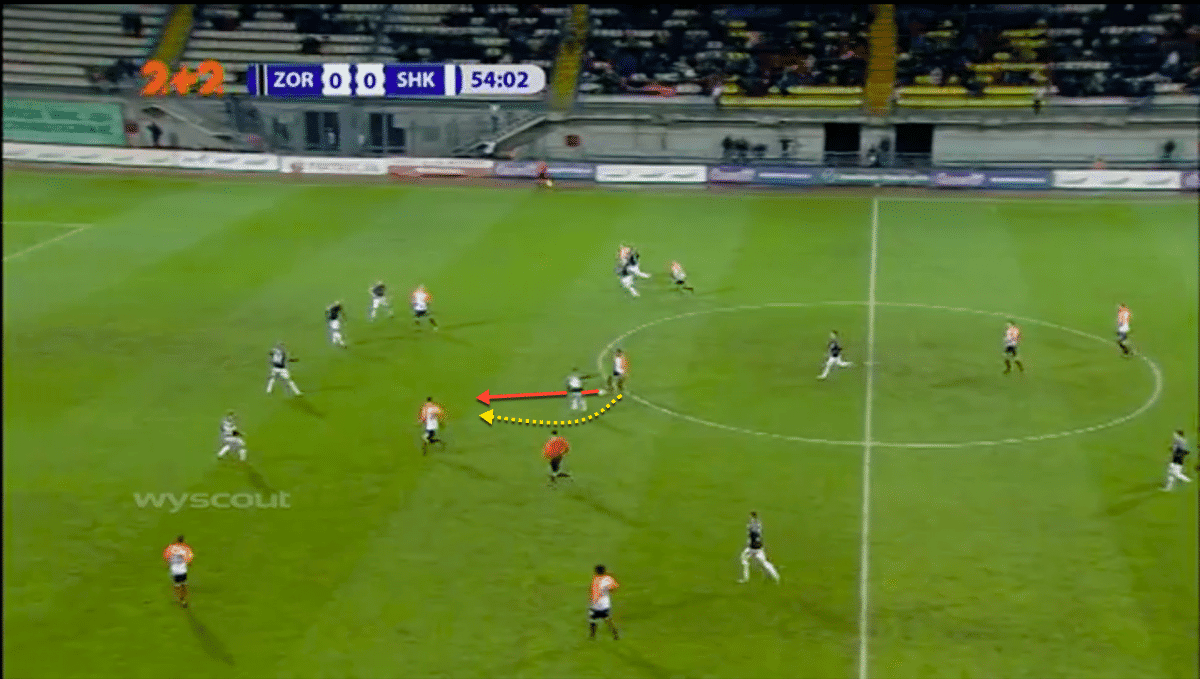 Here, against Zorya Luhansk, we see how Fred employs his dribbling gifts to break the lines of the opposition and create space for himself and others. Immediately pressured upon received possession, the Arsenal target skilfully plays the ball around one side of his challenger and runs around the other to collect it.

In one movement, he has eliminated his marker and is now free to advance on the Zorya defence. 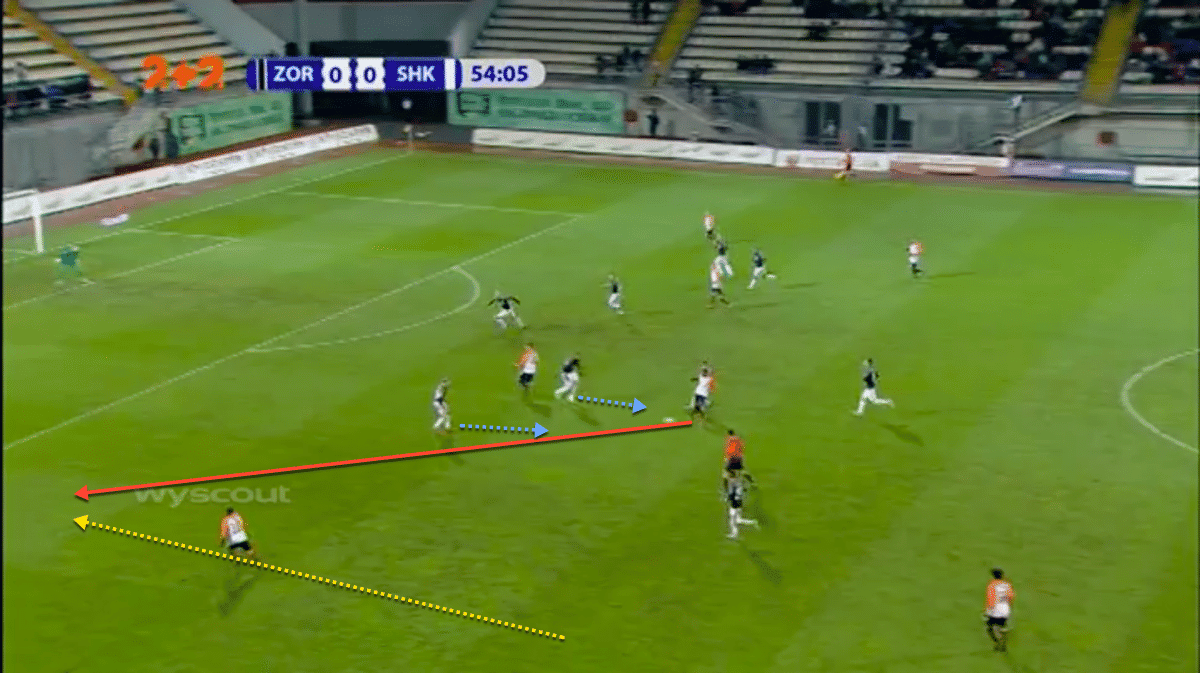 From there, he again draws the attention of multiple opponents before releasing winger Bernard, with whom he has developed a great understanding at Shakhtar Stadium, down the right. With Bernard out of contract at the end of the season, Fred's suitors could do worse than trying to pair Fred once again with his speedy compatriot.

What are Fred's main weaknesses?

The main downside of Fred's game is his lack of aerial ability, which, standing at 5ft 7ins, can hardly be held against him.

While his lack of height hampers his ability to challenge for headers, it does not hold him back in one-v-one exchanges on the ground, where he impresses with his upper-body strength and tenacity.

It may be a concern for some sides who adhere to a certain style of aerial-reliant play, but the clubs reportedly interested in Fred all predominantly opt to play with the ball on the deck, and would therefore be unlikely to consider his weakness in the air to a major stumbling block. 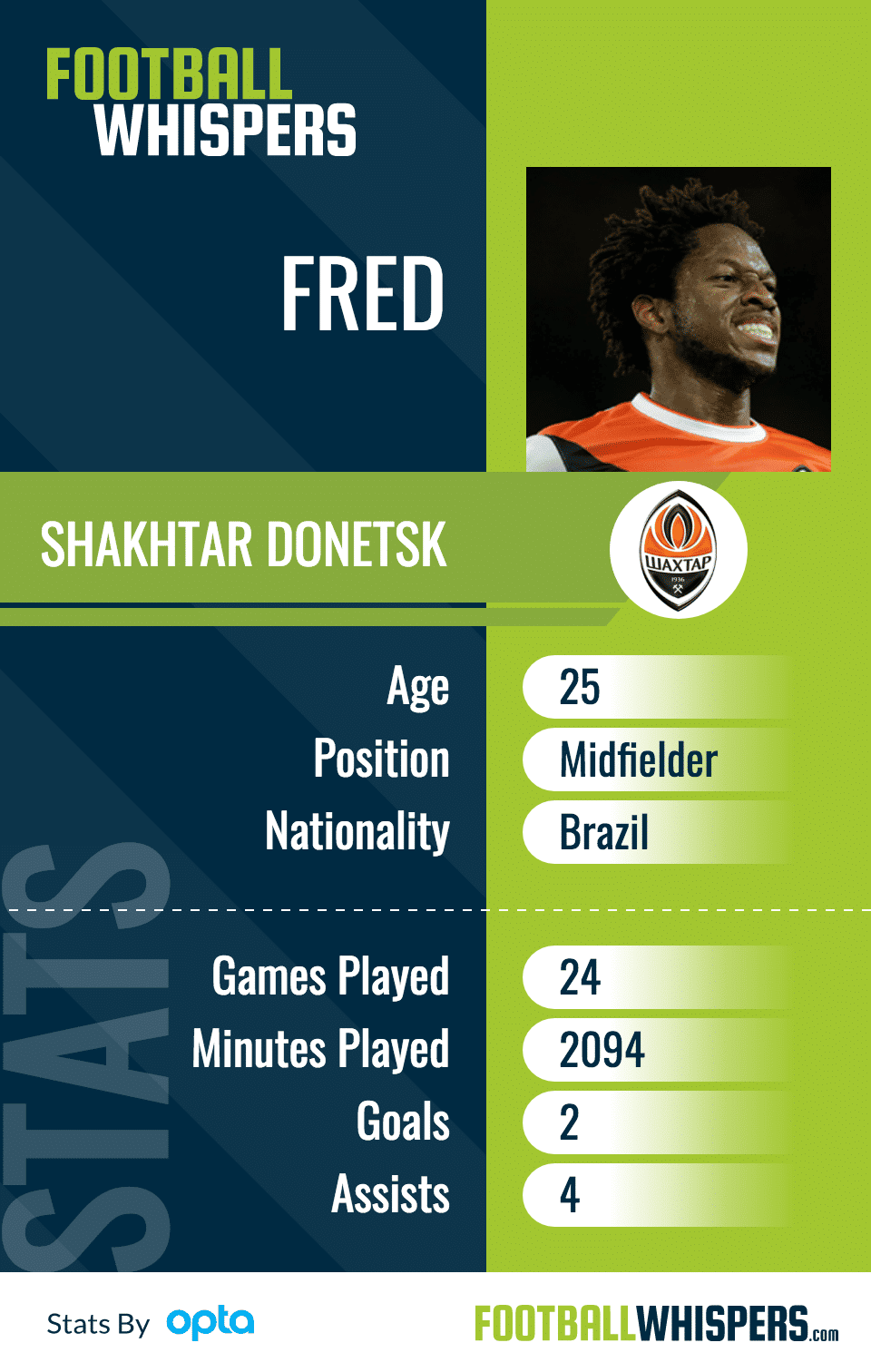 How much will Fred cost?

Although they picked him up aged 20 and relatively unknown outside of his homeland, the €14million Shakhtar had to fork out for Fred represented a significant outlay for the Ukrainian side.

As such, they would surely be intent on receiving a significant fee if they were to consider parting ways with the Brazilian any time soon.

Most outlets reporting interest in Fred have valued him at around the £30million mark, which would seem a sensible, reasonable fee for a player of his profile, age and experience.

However, due to the vast array of clubs on his trail, Shakhtar must have hoped be hoping to instigate a bidding war to push up the price of their prized asset, hence why City were linked with a £44.5million move.

Philippe Coutinho's £140million mid-season switch from Liverpool to Barcelona shows just how much the premium on top-class creative midfielders has risen over the last 18 months, dating back to Paul Pogba's record-breaking move to Manchester United in the summer of 2016.

This means that elite clubs have two options: either they suck it up and pay the eye-watering fees that are quickly becoming the going rate for established flair players; or they put their scouting networks to better use and try to create the next big thing from a base of raw ingredients.

Fred would fall closer to the latter than the former, although he is hardly a rough diamond, possessing such class with and without the ball.