Despite the obvious, canny social media and marketing opportunities it offers (Fred the Red!), the signing of Brazilian midfielder Fred is not the kind of marquee arrival Romelu Lukaku generating greater excitement.

Indeed, many United supporters will be unfamiliar with the 25-year-old, whose move to Old Trafford from Ukranian side Shakhtar Donetsk has reportedly cost the Red Devils £47million.

But Fred is a very necessary signing for United. José Mourinho's side have lacked balance in midfield, with record buy Pogba yet to find his niche within the middle third at Old Trafford, and a rotating cast of Ander Herrera, Scott McTominay and Jesse Lingard tried alongside the Frenchman and Nemanja Matić last term, as Mourinho experimented with his options.

Fred's arrival will aid United in striking a satisfying balance in midfield, and he can do so in a number of ways, raising an interesting discussion point of how Mourinho intends to deploy his latest big-money buy.

At Shakhtar last season, Fred featured predominantly as part of a double pivot at the base of manager Paulo Fonseca's midfield in a 4-2-3-1 formation. However, despite the Brazilian's starting position remaining consistent – on the right of the two deepest central midfielders – his remit did not.

There were games in which Fred applied his energy, explosive dribbling skills and ambitious forward passing ability in a box-to-box role, and other instances where he was tasked with a more defensive job, dictating play from deep and positioning himself behind the ball, ready to harry and intercept when the opposition attacked.

Which of the two roles he was asked to perform depended on whom he was partnered with, which in turn was usually dictated by the quality of opponents Shakhtar faced: against high-calibre opposition, the defensive-minded Taras Stepanenko might start, allowing Fred freedom to roam; if Fonseca wanted to cram an extra attacker into his line-up, the more creative Alan Patrick would drop into a deeper position and Fred would be the one to hold the fort.

As such, with the Brazilian having demonstrated the ability to perform to a high standard in both roles, Fred's signing gives Mourinho two intriguing midfield options.

When off the leash, Fred is a dynamic, vibrant and creative player, always looking to put his team on the front foot and positive in all of his work. If United stick with the 4-3-3 shape they utilised towards the back end of last season, the 25-year-old former Manchester City target could thrive on the right of the midfield three, with Matić sitting and Pogba in his favoured position on the right.

Fred's standout attribute is his ability to drive forward through midfield. With his upper-body strength and ability to turn sharply away from challenges, his powerful dribbling in central areas and comfort playing through pressure is not dissimilar to that of Liverpool signing Naby Keïta. 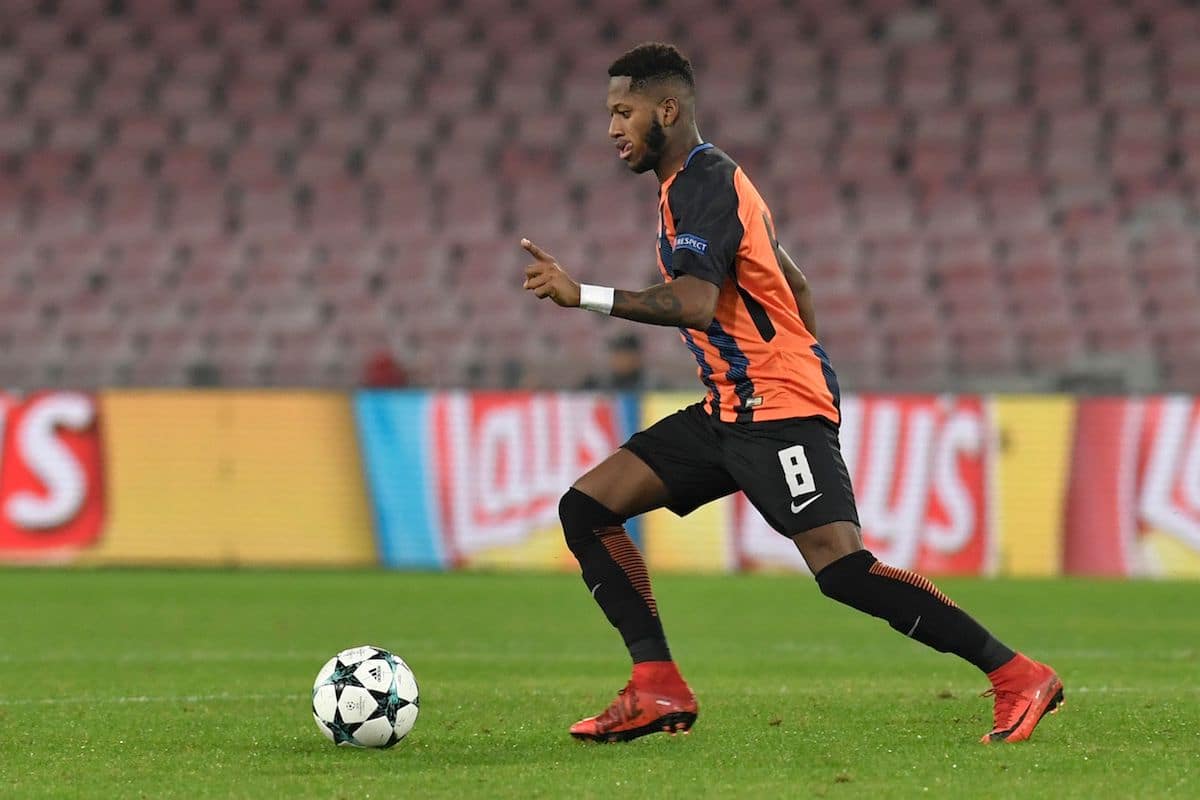 In the Champions League last season, Fred completed a staggering 23 take-ons, ranking him among the top 95 per cent of midfielders in the competition, despite Shakhtar exiting at the last-16 stage. Even more impressive is the fact that these 23 successful dribbles came from just 24 attempts, proving the United newcomer to be a difficult man to stop.

An instigator of attacking moves from deep, when allowed, Fred will break ahead of the ball, looking for passing combinations. Brave and ambitious in possession, he can be incisive while playing passes on the run – another strength he shares with Keïta – and isn't afraid to try his luck from distance, confident shooting with either his stronger left or weaker right foot.

All this being said, Fred covers ground well without the ball, either when pressing opponents at the breakdown of play or racing back into a defensive position to snuff out counter-attacks.

With all this in his locker, he could be a real asset to United in a box-to-box role, from which his ball progression would help release Pogba in advanced areas and his recovery skills would aid Matić defensively; with the Serb often struggling to cover space when isolated defensively and too easily run off of, Fred's presence would ease the burden the former Chelsea man carries.

Alternatively, the eight-cap Brazil international could be deployed as the pivot at the base of United's midfield three. This would allow Matić, a fine passer and underrated threat going forward, the kind of freedom he enjoyed in his final season at Chelsea, when he played alongside N'Golo Kanté, the current gold standard for pure defensive midfielders.

While such a role might not make the best use of Fred's superb drive and dribbling ability, his one-v-one skills could be applied to allow him to weave away from pressure in deeper zones, maintaining controlled possession and forward momentum when pressed.

Fred's athleticism would see him cover space more effectively than Matić is able to in the role, and his tenacity and sound positioning could see him recover possession – his 1.37 interceptions per 90 was 24th-best among Champions League midfielders last term, and his 2.87 tackles ranked sixth – before then quickly launching transitions.

And while he might prefer the freedom to roam forward, the Belo Horizonte-born playmaker has the discipline to suppress his attacking instincts when required.

One of United's main weaknesses last season was their ponderous attacking play. Their slow build-up through midfield too often allowed the opposition to retreat into a solid defensive structure, which the Red Devils then struggled to break down. Fred could be the remedy.

Although not quite as metronymic a conductor as a prime Michael Carrick, or Napoli's Jorginho, averaging 56.82 passes per 90 in the Champions League in 2017/18, rather than the 70 or 80 of the foremost tempo-setters, Fred is a safe pair of hands when he needs to be – averaging an 85.9 per cent pass completion – but also unafraid to launch instant, line-breaking through-balls to attackers.

With Mourinho said to be in the market for another midfielder this summer, as contract rebel Marouane Fellaini edges towards an exit, the type and style any second midfield signing United make could expose the Portuguese's intentions with regards to Fred's role: a more attacking arrival might mean Fred is viewed as a defensive midfielder, and vice versa.

But, unlike Pogba – whose unique skills demand a very specific, bespoke role – Fred has the tools and adaptability to thrive whichever way Mourinho intends to use him, giving United's midfield the balance it craves.