Suddenly it seems a very long time since those heady autumn days when Frank Lampard had Chelsea flying.

The Blues won six straight Premier League games between the end of September and start of November. Stamford Bridge's favourite son had taken to top-level management with ease. He'd made a mockery of the fact he couldn't strengthen following the club's two-window registration ban and the loss of Eden Hazard.

But since that run ended on November 9, Chelsea have taken 19 points from a possible 48. It looks highly unlikely they will progress in the Champions League either, following Tuesday's humbling 3-0 defeat to Bayern Munich at the Bridge.

Most Chelsea managers would be coming under increasing scrutiny about now. But Lampard isn't most Chelsea managers. He is, in fact, unique. His hero status already secure thanks to 211 goals, 648 appearances and 13 trophies as a player, he has also been protected by that pesky registration ban.

But after said ban was overturned by the Court of Arbitration for Sport, Chelsea then failed – or refused, depending on who you believe – to make any signings during the January transfer window. However, it's already shaping up to be a busy summer in South-West London with Moroccan attacker Hakim Ziyech already committed to join from Ajax.

According to reports in light of last week's defeat by Bayern, Lampard will ‘axe' as many as eight first-team players this summer. But is that drastic action required, or is it simply a case of fine-tuning a squad which has been in the top four all season long? 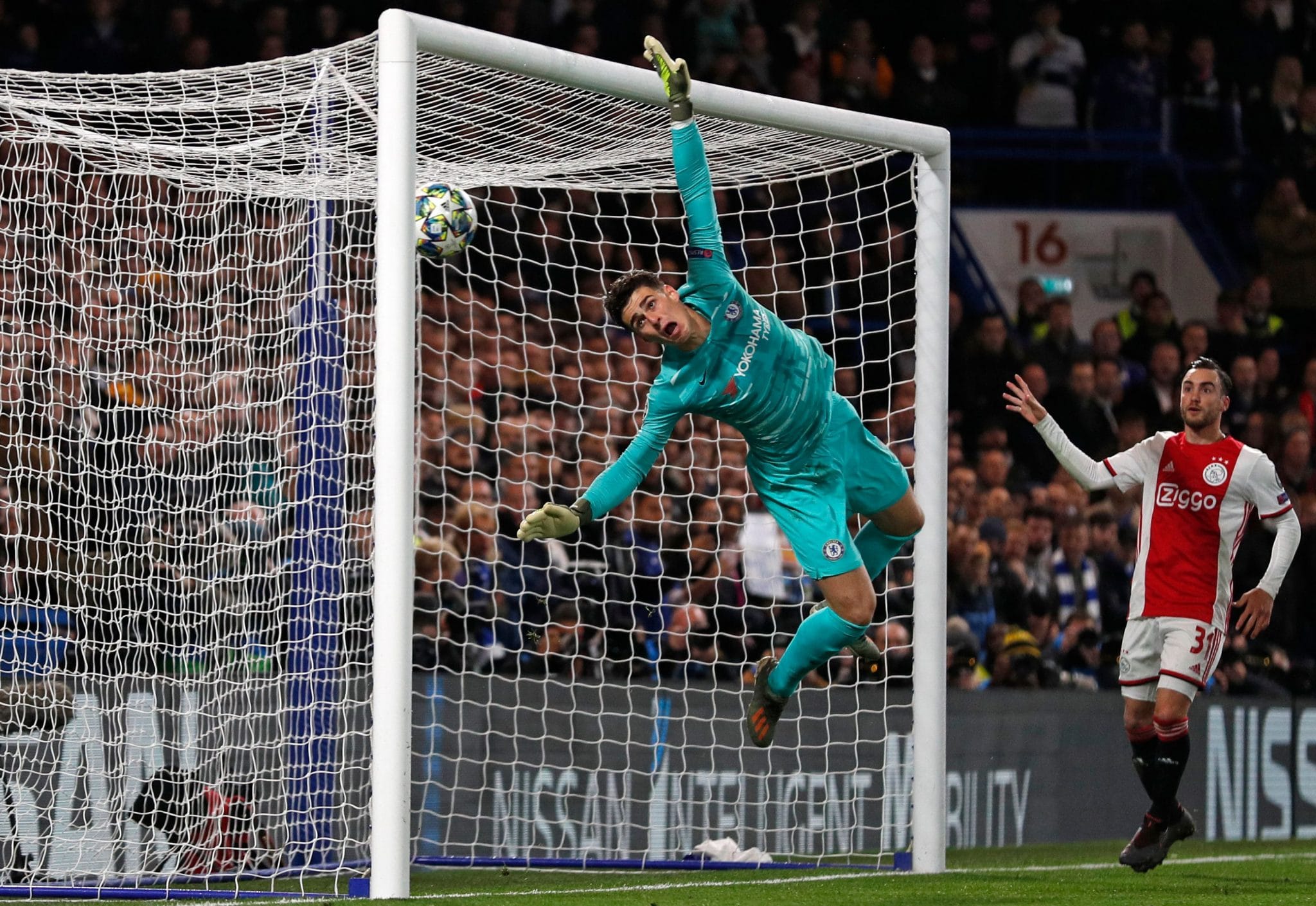 Unsurprisingly, Chelsea's under-fire No.1 is chief among the list of players who are surplus to requirements.

The world's most expensive goalkeeper has lost his place in the side to Willy Caballero for the last six and, unlike last season when Maurizio Sarri ditched the former Athletic Club keeper for one match, Lampard has shown little sign of reinstating Kepa.

Having a £72million goalkeeper warming the bench is not a good look for anyone. Caballero has been shaky since coming into the side and, at 38, clearly isn't the long-term solution for Chelsea either.

If Lampard doesn't fancy Kepa, he will have to sell him and use the funds raised to sign a new No.1 – Ajax's André Onana and Burnley's Nick Pope have already been linked.

Lampard will have every right to feel a little let down by the 25-year-old having fought hard to keep him at Chelsea last summer amid interest from Everton.

The Frenchman has spent the last two campaigns away on loan – first at Stoke City, then at Goodison Park – in an attempt to get back to his best following a serious knee injury.

Zouma has made more Premier League starts (18)than any of Chelsea's other centre-halves this season. But that is as much down to Antonio Rüdiger‘s injury issues as his own form, while Andreas Christensen has failed to convince and Fikayo Tomori is a rookie at this level.

At his best under José Mourinho, Zouma was quick, powerful and aerially dominant, displaying all the traits of a modern centre-half. But playing for three sides in as many seasons cannot have helped his development. While he can no longer be considered a prospect at 25, he does have time on his side – but this could be his last chance. 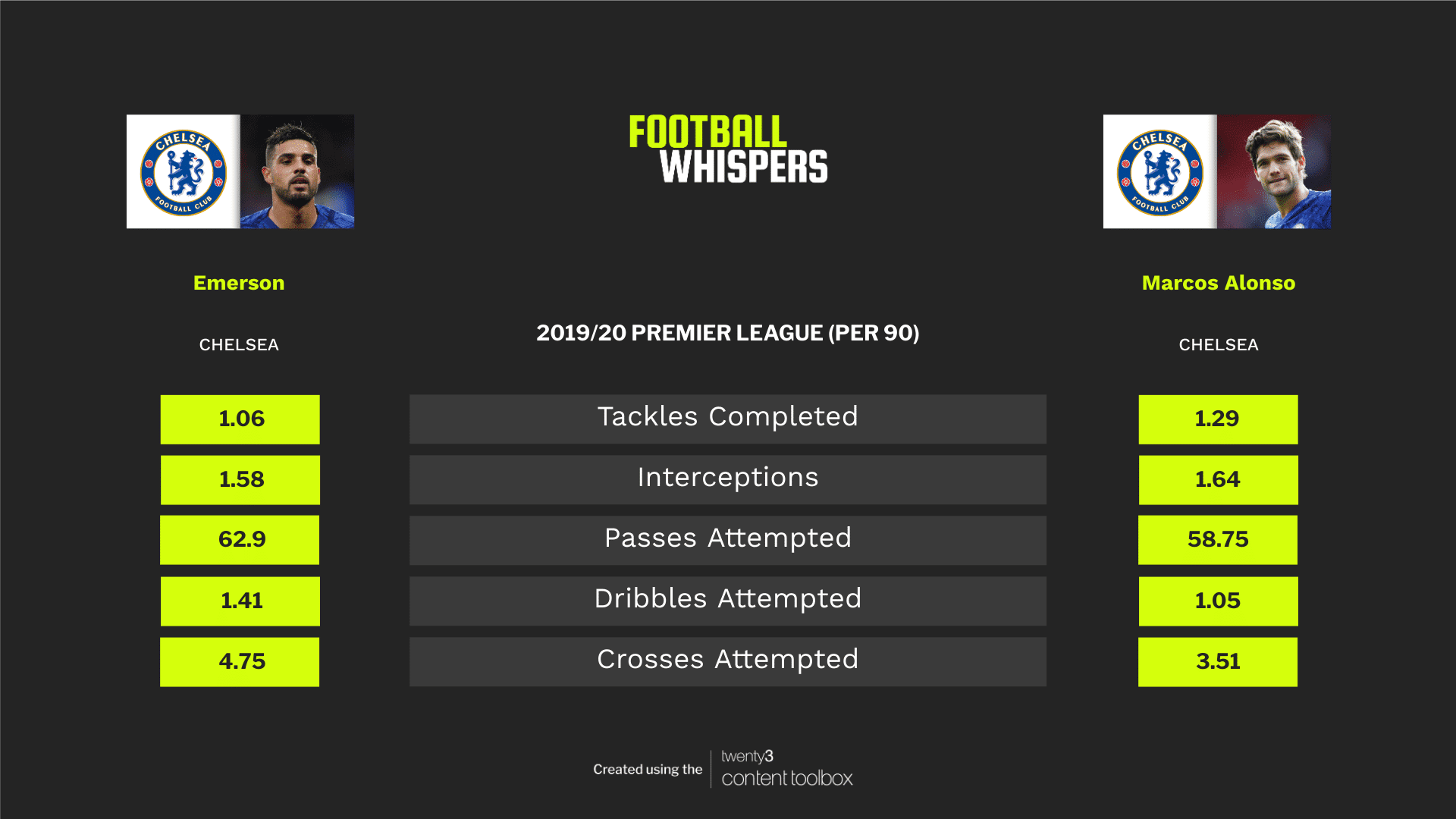 The future of these two is intrinsically linked. Lampard clearly doesn't fully trust either of his left-backs. Both better going forward than defensively, he has largely given Emerson the nod this term – Alonso's needless dismissal in the Champions League loss to Bayern won't have helped his case.

Persistently linked with a move for Leicester City‘s Ben Chilwell, Chelsea will have to fend off interest from Manchester City to sign the England international. Regardless, the likelihood of Lampard being able to shift and sign two left-backs in one summer is remote.

So someone has to stay, even if they are only ever going to play the role of deputy. Football Whispers data has Alonso attempting (2.34) and winning (1.29) more tackles, as well as winning more defensive duels (6.44) and completing more interceptions (1.64).

There's not much between them when it comes to the attacking side with Emerson completing more take-ons (1.06) while Alonso has scored (4) and assisted (2) more as well as having more final-third entries (4.21) and Big Chances (0.35).

For a time it looked as though the Italian international's stay in London would be as short as that of the man who brought him here. But after leaving Chelsea for Juventus, Sarri was unable to persuade his former employers to part with Jorginho.

That's something Lampard will have been grateful for as the 28-year-old has become an integral part of his side this season, showing exactly why Sarri sanctioned a £50million move to bring the midfield metronome with him from Napoli.

While it's true Jorginho has suffered a dip in form recently, he remains one of Chelsea's most consistent and important players this season – underlined by the fact he has been named captain on a number of occasions and takes penalties.

No-one at Chelsea has completed more accurate passes this season (1,638) or won possession more often (214). Lampard will want to build his Chelsea 2.0 side around Jorginho. 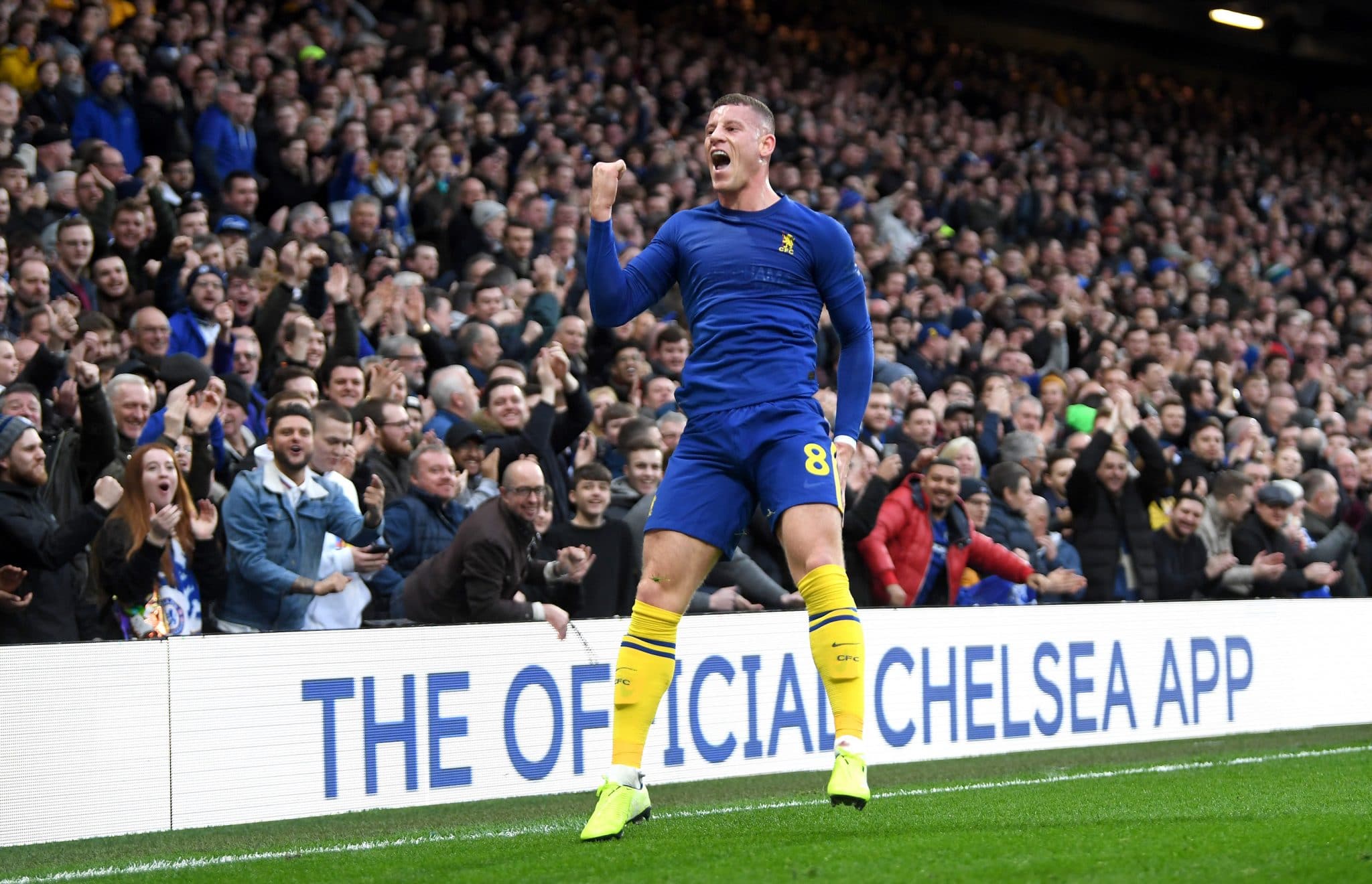 There's no getting away from it. Barkley's Chelsea career has been a disaster. At £20million he was a fairly cheap, low-risk gamble when he signed from Everton in January 2018. But he was injured when he arrived and even when fit, he's struggled to convince.

On and off-field issues have plagued the 26-year-old's time in West London and he's only been afforded  Premier League appearances this term. Barkley didn't help himself by missing a crucial late penalty in defeat to Valencia after batting Jorginho or Willian – Chelsea's usual spot-kick experts – aside.

In November, Barkley was pictured topless outside of a nightclub and subsequently dropped for Chelsea's Champions League fixture in Valencia with Lampard critical of a player he had previously been at pains to defend. In fact, in 2016, while still playing, Lampard said Barkley reminded him of ‘a young Wayne Rooney'.

There is a feeling that if Barkley cannot get his act together long enough to learn from one of the greatest midfielders England has ever produced, it's not going to happen for him at Chelsea. A fresh start might be best for all.

The former Barcelona forward has been one of the biggest losers in Lampard's appointment. USMNT winger Christian Pulisic and homegrown wideman Callum Hudson-Odoi have both been preferred to the Spaniard who made just a single Premier League start between August 18 and November 30.

The 32-year-old hit 13 goals in all competitions last season – the joint-best return of his Chelsea career – but it has been apparent for some time now that he is past his best and a move away from Stamford Bridge seems inevitable.

Linked with Fiorentina and Roma in January, Pedro's contract is up this summer and he is expected to leave on a free transfer. 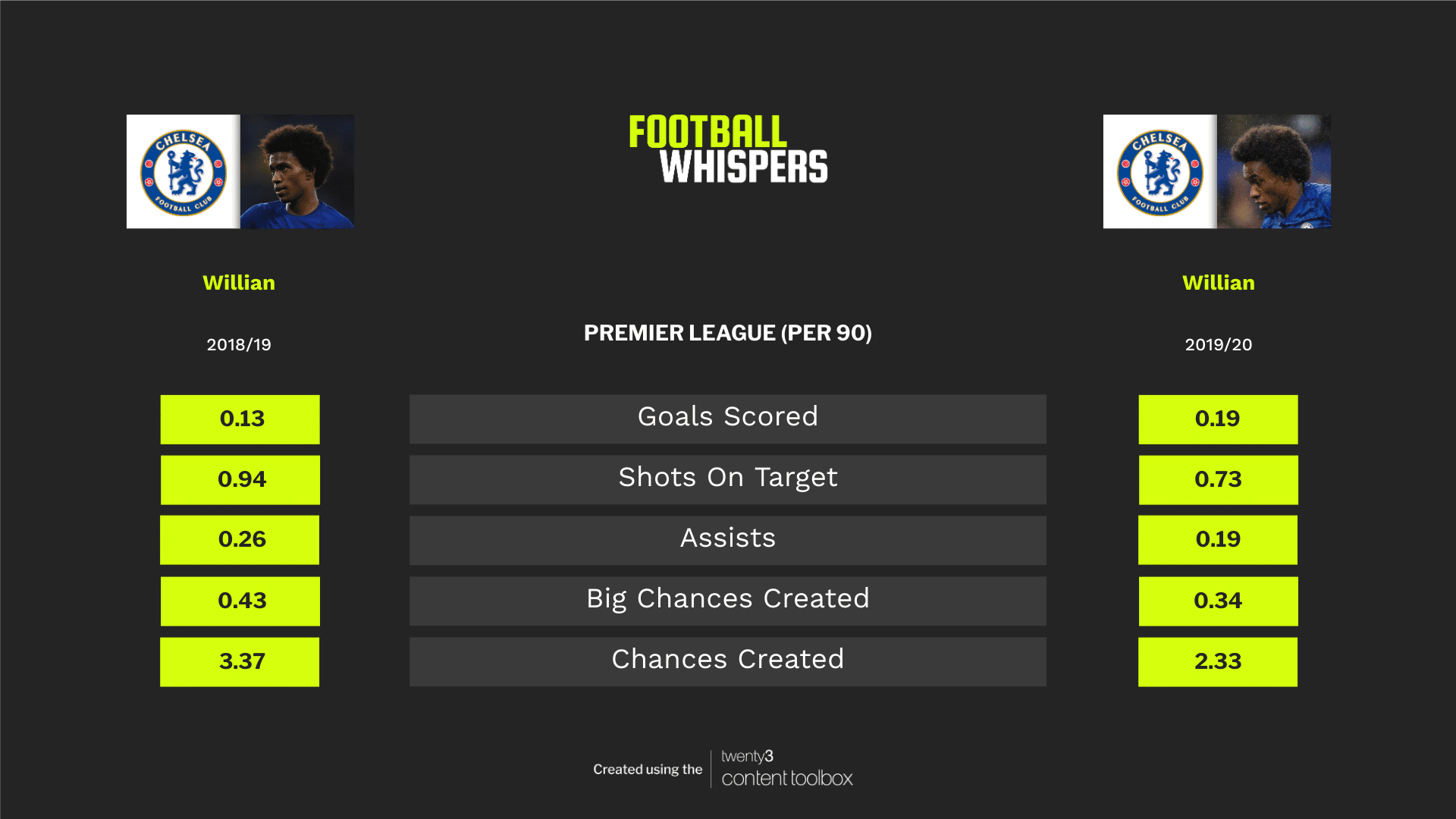 The winger has often been a figure of frustration for Chelsea fans and managers past and present. But this season Willian has enjoyed something of an Indian summer, underlining his credentials once more.

The problem for Lampard and Chelsea is the 31-year-old is out of contract and Barcelona – according to reports at least – have been sniffing around the Brazilian all season long. Juventus, kings of the free transfer, have also been credited with an interest.

Chelsea famously only dish out one-year extensions to players over 30. Forced into making exceptions last summer, they won't be so generous this year and Willian will receive longer offers from Barça and Juve.

A year ago the Blues would have been desperate to keep Willian. With a two-window registration ban looming, they simply couldn't let a player of his experience walk out the building. But times have changed. Pulisic has improved steadily, Hudson-Odoi has shown glimpses of his huge potential and Ziyech is on his way. A genuinely mutual parting of the ways suits all parties.