Chelsea‘s relationship with Maurizio Sarri was one of convenience. Nothing more.

Sure, it wasn't all bad. There were even fleeting moments when something akin to fondness cracked through the apathy. But it couldn't continue. And when the Old Lady that is Juventus batted their eyes at the Italian coach, a way out that suited all parties was understandably taken.

So Chelsea need someone new to partner up with. And they've decided to return to one of their greatest loves: Frank Lampard.

The Blues and Lampard have a special relationship. It was with the club that Lampard blossomed from functional Premier League midfielder to one of English football's greatest players. Trophies were won, an unbreakable bond forged.

“The largest part of my heart belongs to Chelsea, a club which has given me so many great memories,” Lampard wrote when his playing career ended in 2017.

“All I can say is from the day I signed until now and going forward, I'm eternally grateful for everything and to everyone.

“Chelsea fans gave me and my teammates incredible support. Their passion and hunger drove me on personally to give my best year after year. I couldn't have done it without them.”

It's little surprise given the above that Lampard is ready to return to Chelsea and take charge of the side to which he served with such distinction. Is he ready for the job with only a year's worth of managerial experience? Probably not.

Yet that doesn't mean he isn't the right fit for Chelsea, especially given the circumstances the club finds itself in this summer.

The Blues have lost their most potent creator and goalscorer in Eden Hazard. Their ageing squad is lacklustre, with several players no longer able produce on a weekly basis. And then there is the biggest problem: the transfer ban.

As things stand Chelsea are unable to sign players for the next two transfer windows. So the new manager will have to work with the existing squad, promote from within and place their trust in young players.

That is something Lampard did at Derby. He may have borrowed Mason Mount and Harry Wilson from Chelsea and Liverpool respectively but he also handed Jayden Bogle his senior debut. The full-back went on to play 50 games in all competitions for the Rams.

This focus on youth is partly down to the style of football Lampard wants his side to play. It requires high-energy, mobile players. Those who are able to press opponents high up the pitch and then make an impact on the ball when possession is recovered.

Derby could be devastating in these transitional situations. They were also a big threat on the counter, too. Where they struggled, however, were on those occasions opponents ceded possession, sat deep and invited the Rams to break them down.

Could that have been because of the quality of player Lampard was working with? Perhaps, although it's a thin argument. What's clear is it's an aspect of the 41-year-old's tactical approach that needs finessing.

The overarching structure, though, is set. So how could the Blues line up under their legendary former No.8? We've taken a look. 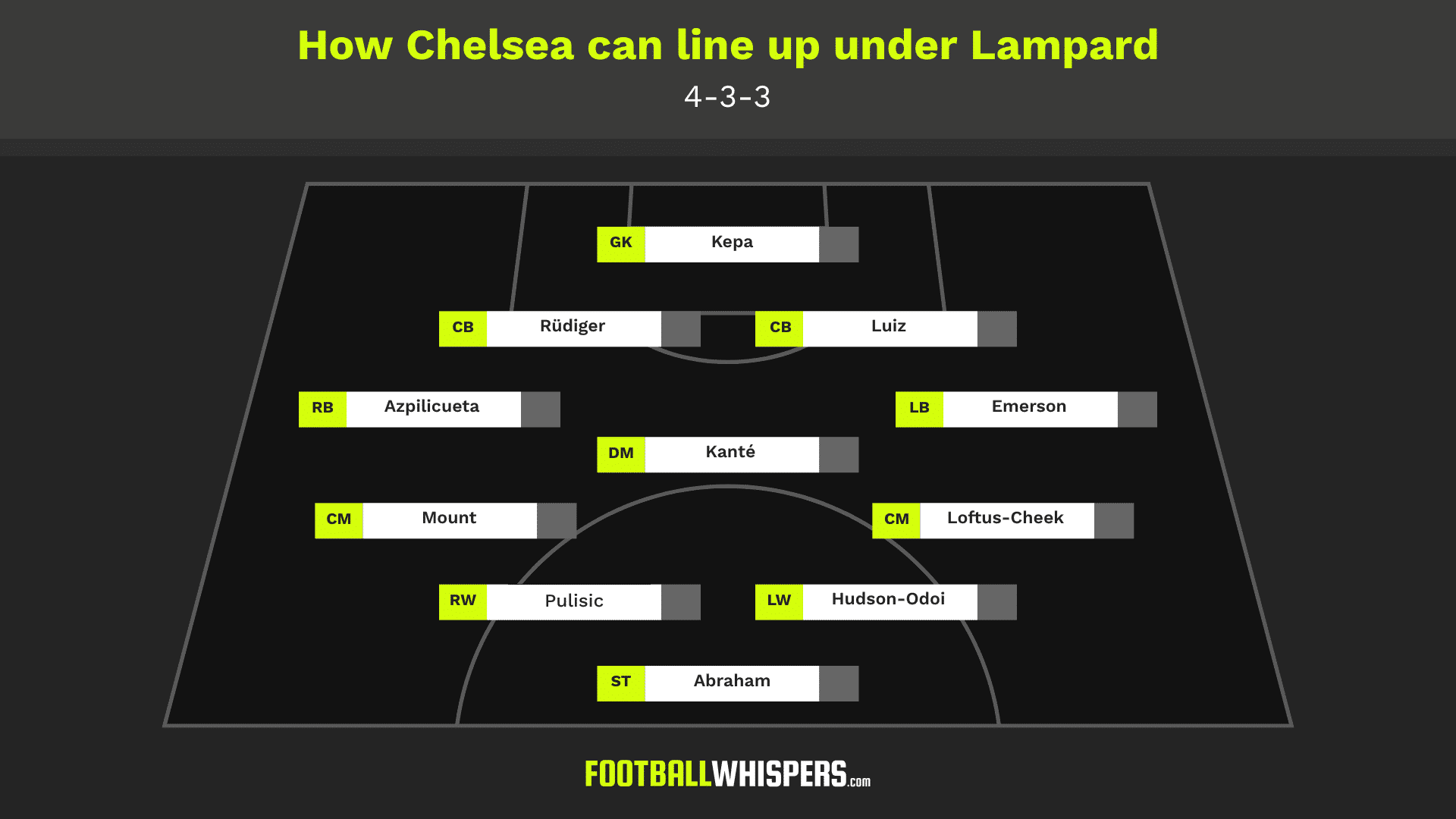 Given the success Lampard enjoyed playing in a 4-3-3 system under the likes of José Mourinho and Carlo Ancelotti, it's hardly surprising it is the predominant formation he utilised last season at Derby.

However, it often morphed into 4-1-4-1 as the two central midfielders pushed into the attacking third to not only restrict space but also immediately threaten goal when possession was recovered.

Mount was one of those central midfielders and it wouldn't be a surprise if he occupies the same role under Lampard at Chelsea. Of course, Ross Barkley is an option. Maybe even the forgotten Danny Drinkwater. But Mount has proven himself to Lampard across an entire season.

On the opposite side of the midfield three is likely to sit Ruben Loftus-Cheek, fitness permitting. The England international impressed last term when given a sustained run of games by Sarri and offers not only athleticism and technique but a goal threat; he struck ten times in all competitions under the Italian coach.

He also dovetailed well with Callum Hudson-Odoi, the obvious candidate to fill the role vacated by Hazard. Lampard's wingers at Derby often cut infield to create numerical overloads and this would suit the teenager, who could come inside onto his stronger right foot to threaten goal or find a teammate.

Christian Pulisic, who is something of a wildcard, is likely to occupy the right flank. The U.S. superstar finished the 2018/19 season strongly for Borussia Dortmund but had spent much of the campaign on the substitutes' bench. 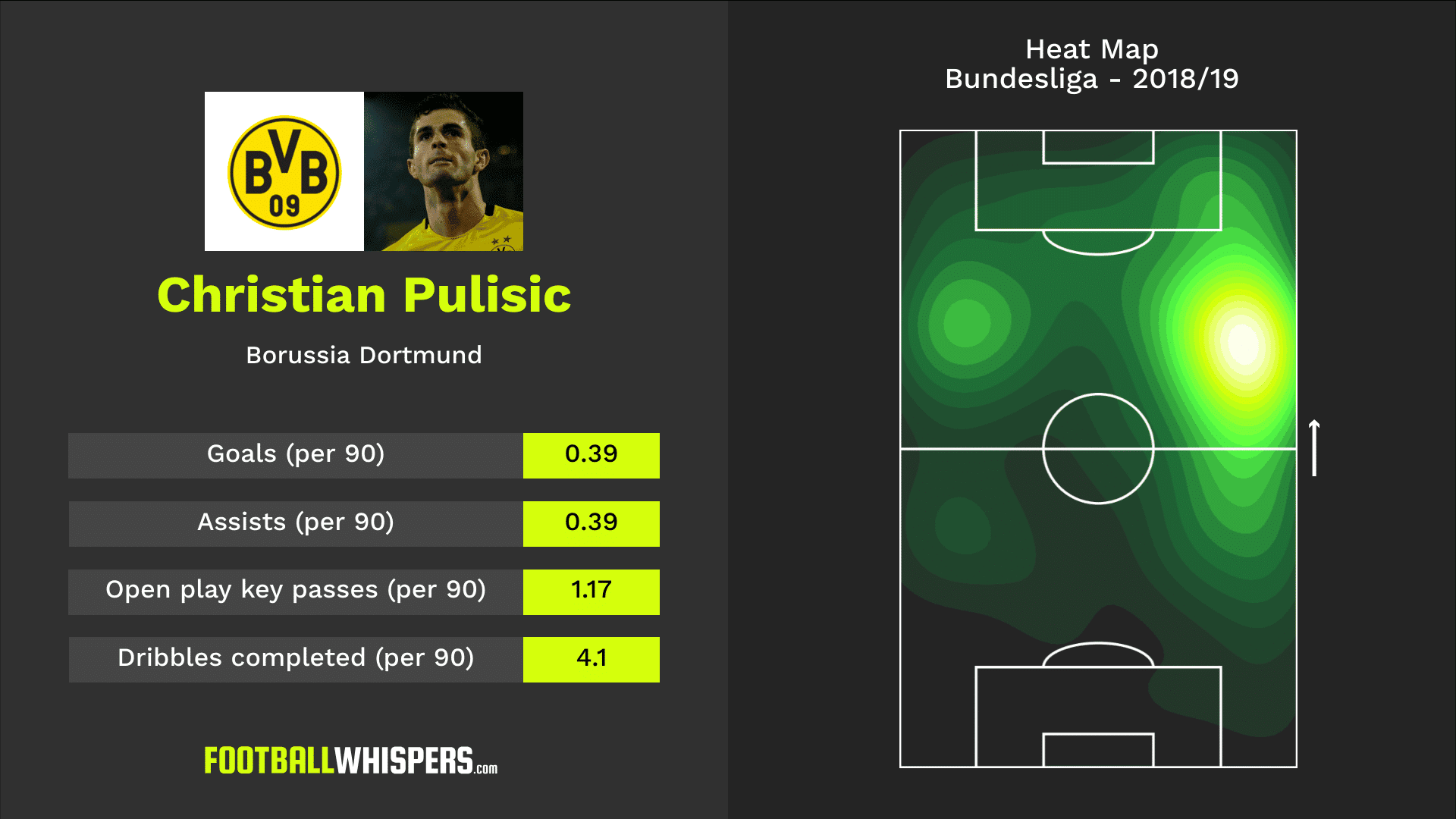 It will be intriguing to see how he adapts to English football. But one thing is certain, his ability to beat opponents could be key to unlocking defences that sit deep and look to soak up pressure.

The American star completed 4.1 dribbles per 90, the second-highest total in the Bundesliga, last season. For more context, Hazard completed 4.24 per 90 in the Premier League.

Who will lead the Chelsea attack is one of the biggest conundrums Lampard must find a solution for. The frontman will have to press. He will have to win back possession in the attacking third. And he will have to score goals.

Given his age and lack of mobility, Olivier Giroud isn't suited for the role. Michy Batshuayi, who is set to return from Crystal Palace, could be an option given he has proven himself a consistent goalscorer in recent loan spells.

Then there is Tammy Abraham. The 21-year-old striker was instrumental in Aston Villa's promotion to the Premier League last term. He struck 25 goals in 37 games in the Championship, an output of 0.67 per 90, the fourth-highest average among strikers.

He is a born goalscorer, an expert at finding space in a crowded penalty area. He is also a willing worker and will press opposition defenders and attempt to cut off passing avenues.

The weakness of Abraham's game is link play. He doesn't yet protect the ball well enough for a striker of his size and he needs to provide more for his fellow attackers; he registered just 0.7 open play key passes per 90 for Villa last season, a figure bettered by 50 of the division's strikers.

Yet if Lampard implements the same system at Chelsea that he did at Derby, Abraham's weakness shouldn't be an issue. The striker's role when in possession is to stretch defences – which in turn creates room for the wingers to come inside and midfielders to push forward – and then occupy centre-backs in the penalty area. Abraham ticks both of those boxes.

So that's the attack. What can we expect from the defence? Well in news that will please Chelsea fans and pundits across the country, N'Golo Kanté is likely to protect the back four.

The World Cup winner was the all-action midfielder in two title-winning sides. But Sarri had a different vision for Kanté and used him on the right side of a front three. As the heat map comparison below highlights, his impact was restricted. 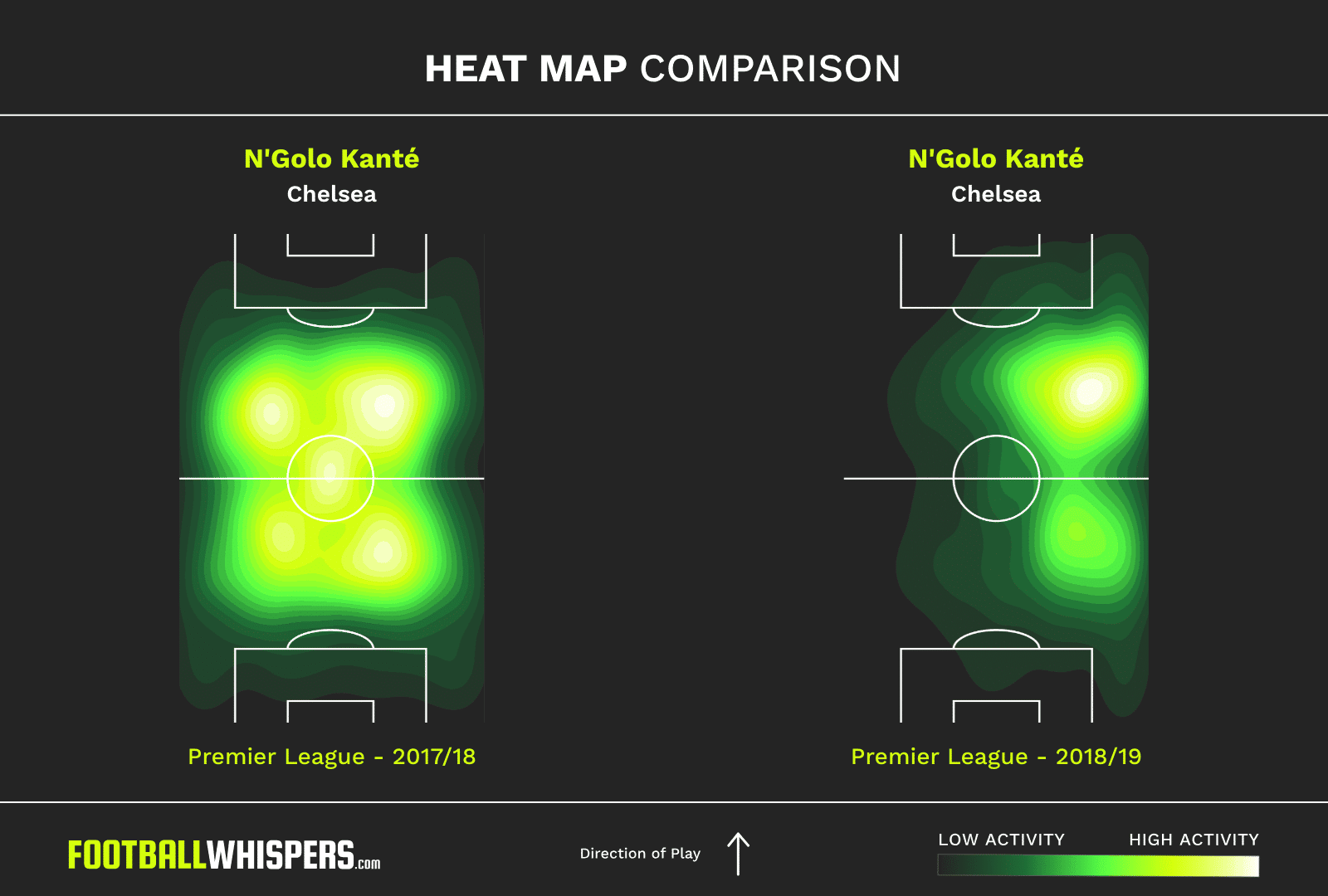 Much like Sarri, Lampard will want to build possession from his goalkeeper out through defence. It would be natural to assume he'd want a regista such as Jorginho to help knit possession together. However, the deepest-lying midfielder is often bypassed.

While Derby's back four were capable of keeping the ball in their defensive third, the first instruction was to try to pass forward. To turn defence into attack.

It's why the centre-backs often played passes through midfield straight into the feet of the wingers and advanced midfielders, who would fill the space created by the striker, as mentioned above.

The defensive midfielder isn't the fulcrum of the team, so Jorginho's skillset wouldn't necessarily be required. Kanté may not be as sophisticated on the ball but he can keep possession ticking over. And his work without the ball may one of Derby's weaknesses into a Chelsea strength.

With the Rams, Lampard had the choice of Tom Huddlestone or Bradley Johnson for the deep-lying midfielder role. Both are in their thirties and are no longer mobile or quick across the ground.

So when opponents recovered possession and countered, they were able to ease through the centre of the Derby side. The indefatigable Kanté would ensure that doesn't happen.

The back four, at this stage, picks itself. Lampard doesn't encourage his full-backs to bomb forward, especially not at the same time. So they have to be defensively sound and Emerson should get the nod over Marcos Alonso.

César Azpilicueta should start at right-back but will come under pressure from Reece James, while it's any two centre-backs from David Luiz, Antonio Rüdiger, Andreas Christensen and either Kurt Zouma or Fikayo Tomori, both of whom will return from successful loan spells.

So that's the framework, Lampard's go-to system. But he did prove at Derby he is willing to adapt. When Mount was injured, he moved to a 4-2-3-1. It's a system that would suit the current Chelsea squad. 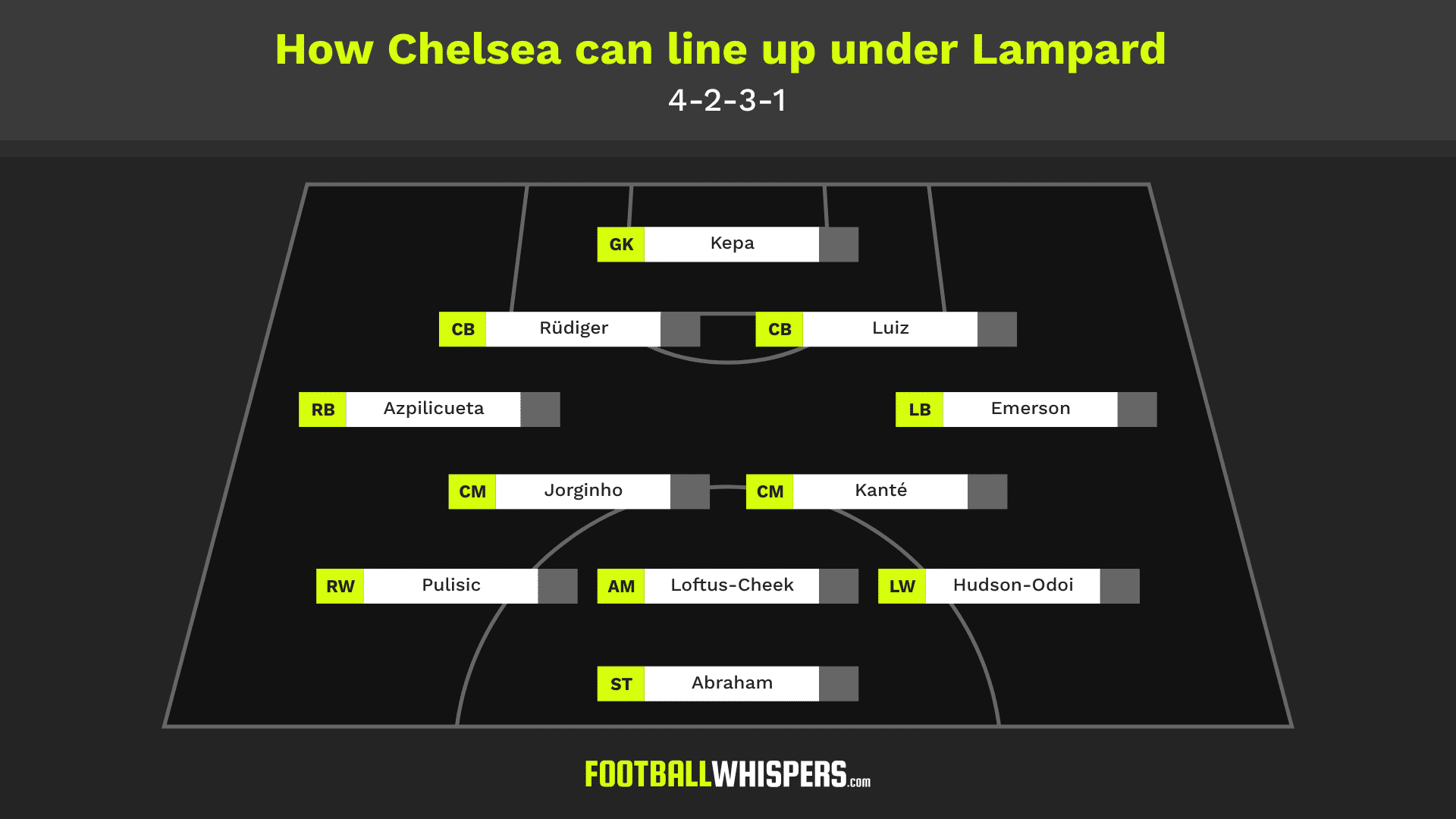 Lampard also toyed with a 4-4-2 diamond and used a back three while against Millwall in February.

“We train fluently to play in different systems,” he said after that game. “We wanted to use the width of the pitch and move the ball. Three at the back, in terms of the shape of the team, it worked well.”

That tactical flexibility, the willingness to compromise, is something else that will endear Lampard to the Blues faithful, many of whom became disenfranchised with the football philosophy Sarri was wedded to.

“I will never forget the opportunity Chelsea gave me and the success we managed to achieve together,” Lampard wrote when he retired in 2017. He and all those of a Blues persuasion will hope history repeats itself.