Arsenal coach Unai Emery's charming grip on English might not extend to the idiom ‘It never rains, it pours' but you suspect the Spaniard would understand to sentiment.

The first season of the post-Arsène Wenger era had been steady if unspectacular until that humbling Europa League final loss to London rivals Chelsea. Defeat not only denied the Gunners a return to the Champions League but ensured Emery will have a restrictive budget – a reported £45million – to play with this summer.

The Rossoneri have appointed Torreira's former coach at Sampdoria, Marco Giampaolo and, earlier this summer, the midfielder reflected on his first season in the Premier League.

“I think it was better in Italy,” Torreira said. “England is a totally different world, a very large country.

“The language [barrier] has cost me, to be able to relate with my peers and with the people. It is very difficult when you can’t have a dialogue. And so is the climate. You go out in the morning and it is cloudy, you arrive late to your home and it is cloudy.”

Milan have reportedly offered to take the 23-year-old on loan for two seasons, at a cost of £7million, with a £34million option on the Uruguayan enforcer included in the deal.

One option which might appeal to the Gunners is a straight swap deal for Milan's Franck Kessié. The Rossoneri want to cash in on the Ivorian to avoid Financial Fair Play sanctions and are prepared to swap the former Atalanta player for Torreira, according to Corriere dello Sport.

With that in mind, we've taken a closer look at this proposed deal to see who would be getting the better end of the bargain, Arsenal or Milan.

Are Torreira and Kessié similar players?

The answer is not really. While Torreira is the deepest-lying of Arsenal's midfielders, ratting around and breaking up play, Kessié plays in a more advanced role for Milan with Lucas Biglia the more defensively-minded operator.

Using Football Whispers' exclusive Player Persona tool, which characterises players based on their statistical output, we can see a clear contrast between the two.

The bulk of Torreira's game is about defending and build-up passing – unsurprising given Arsenal's propensity for ball retention, even under Emery. Kessié, meanwhile, is more about dribbling, chance creation and shooting.

That contrast is further underlined when we compare the two statistically. Using metrics one would associate with a defensive midfielder, on the basis that is what Torreira is for the Gunners, it's evident Kessié would not be a like-for-like replacement. 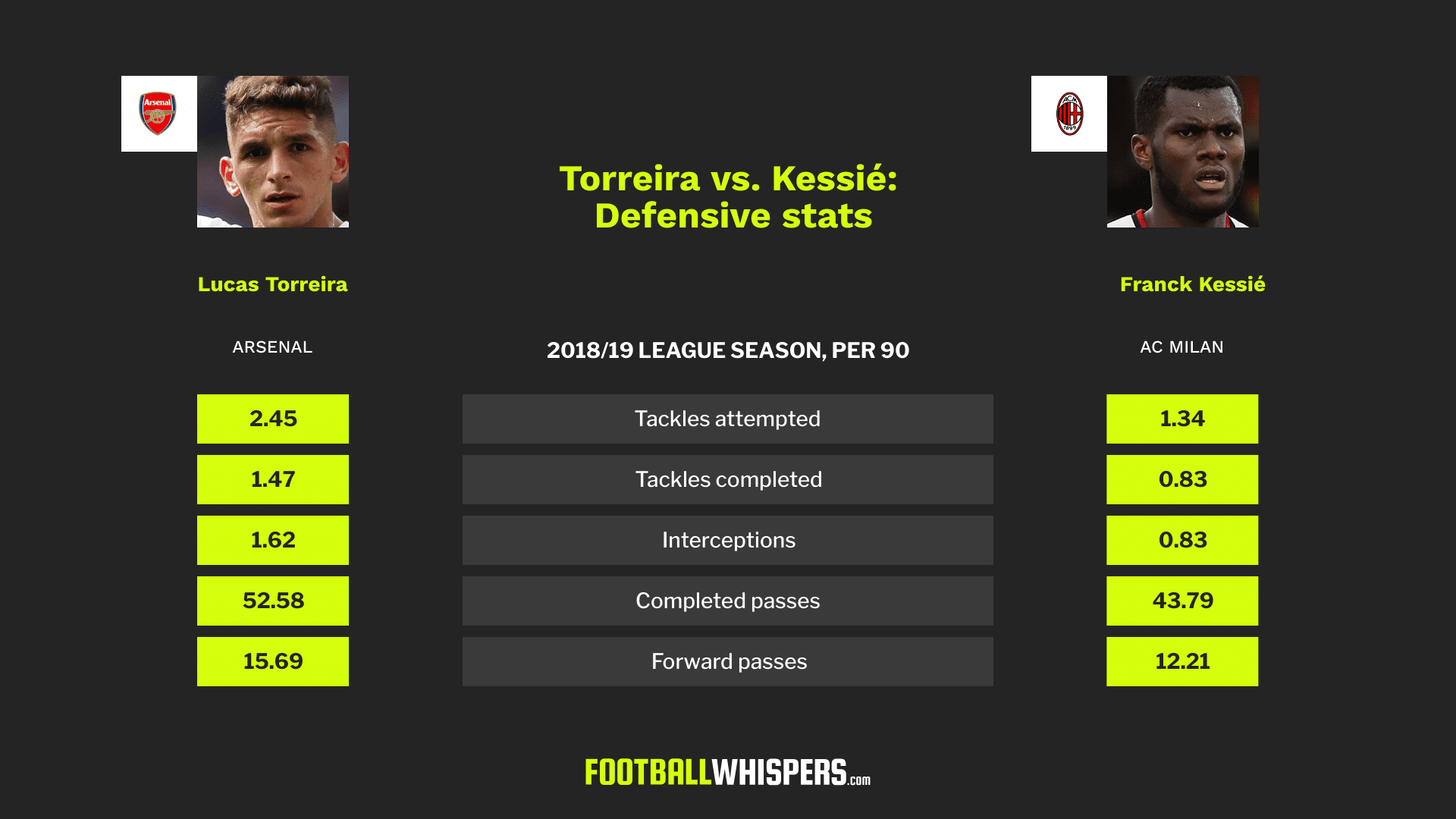 For a fuller picture, we've also scrutinised some of the statistics one would associate with a more attack-minded midfielder than Torreira and, predictably, it's Kessié who comes out on top for shots, open-play key passes and successful take-ons. 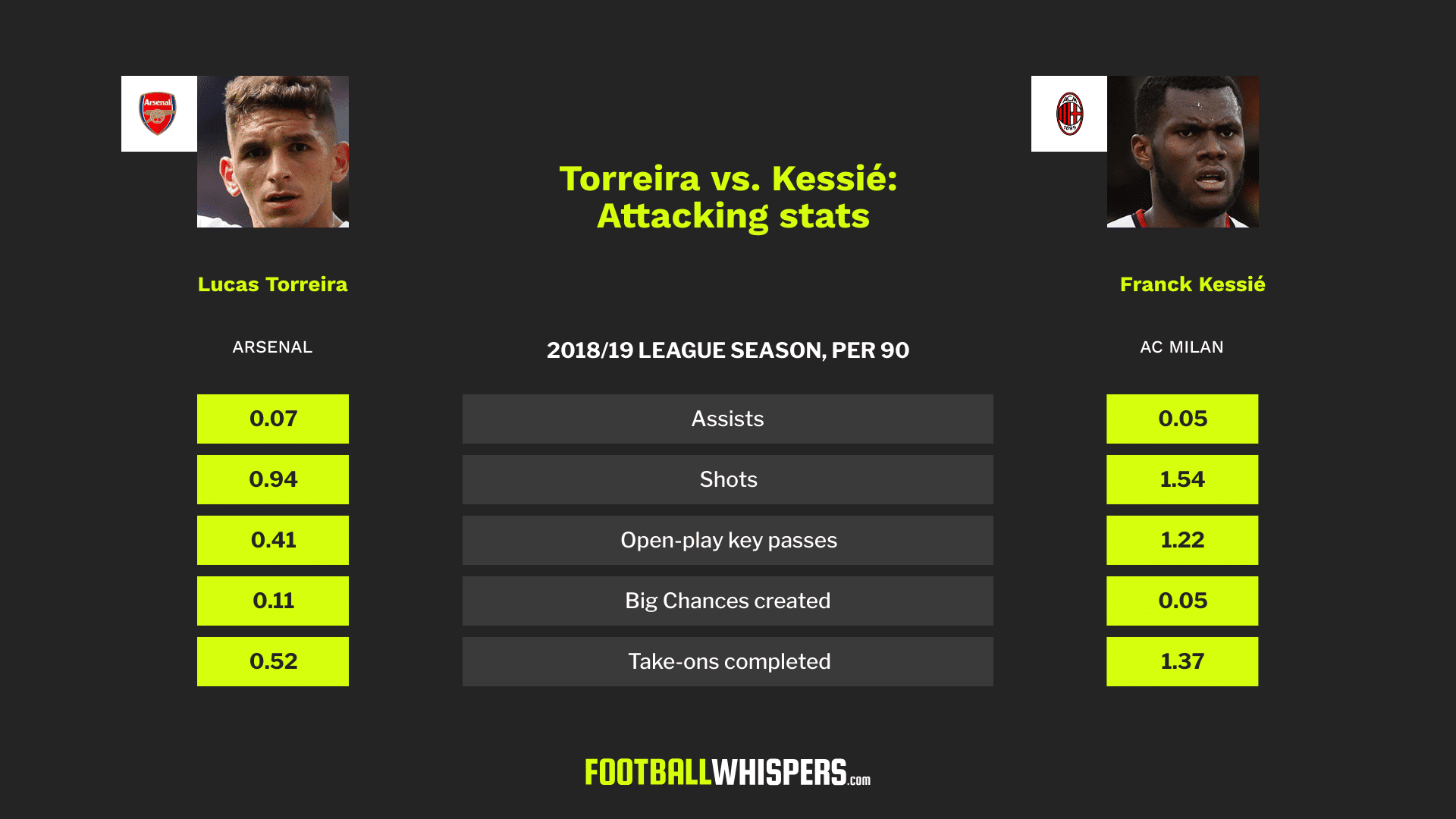 So is Kessié even what Arsenal need?

Some of the most memorable and revered midfielders in Premier League history have been powerful, domineering, box-to-box players, galloping through the midfield traffic, leaving a trail of destruction in their wake.

Manchester City icon Yaya Touré is the gold standard in recent years while Arsenal's own iconic No.4, Patrick Vieira was another to combine irrepressible physical power with an abundance of skill and technique to boss the midfield.

But in 2019 the little guys rule. N'Golo Kanté is a one-man midfield while Torreira has been dominant for the Gunners despite his diminutive 5ft 6in frame. The ideal, in fact, is someone who can do both sides; win the ball and then drive forward or bring others into play with a good range of passing.

There is a case to be made that the Gunners are in dire need of someone to do that. Their central midfield options are uninspiring.

Mohamed Elneny has clung on at the Emirates without ever showing more than occasional glimpses while Granit Xhaka – despite being freed by Torreira's arrival – was plagued by inconsistency once again last season. Mattéo Guendouzi, for all his promise, is still very raw and not yet ready to anchor a Premier League midfield for 38 games.

So does the deal make sense for anyone?

Milan are only keen to move Kessié on to help them avoid exceeding the maximum permitted loss for the last FFP monitoring period, something they are in breach of due to their incredible outlay ahead of the 2017/18 season. Moving one of their more saleable assets on without receiving a fee for him seems like bad business.

Equally, from an Arsenal perspective, losing Torreira without raising the cash to sign a ready-made replacement is far from shrewd. At 23, the Uruguayan was highly impressive in his maiden season in the Premier League and all the signs are he will continue to mature.

Even if Arsenal would stand to benefit from signing a rangy, box-to-box midfielder like Kessié the reported £40million price tag would eat up the bulk of Emery's transfer budget this summer.

The Gunners cannot afford to waste a penny this summer and Kessié would not be the best use of their limited funds.