Linked with big-money moves to Chelsea and Roma, Atalanta midfielder Franck Kessie is one of the hottest properties in Serie A right now.

La Dea even reportedly turned down offers in excess of €20million in the January transfer window for the 20-year-old Ivory Coast international, but substantial bids are set to flood in once again in the summer.

Interest in Kessie is high, and the former Cesena loanee will have no shortage of suitors should he decide to depart the Stadio Atleti Azzurri d'Italia at the end of the season, but, if he has his way, there is one team in particular that he’d love to join.

“I like the Premier League and in particular Manchester United, the club I dream of playing for,” he told Tuttomercatoweb.

“Chelsea? That is also a big club, nobody would turn them down, but I dream of United.”

About as clear a come-and-get-me plea as you’re likely to hear. If the Red Devils do intend to make a summer bid for the midfield dynamo, how will he fit in at Old Trafford and what would he bring? 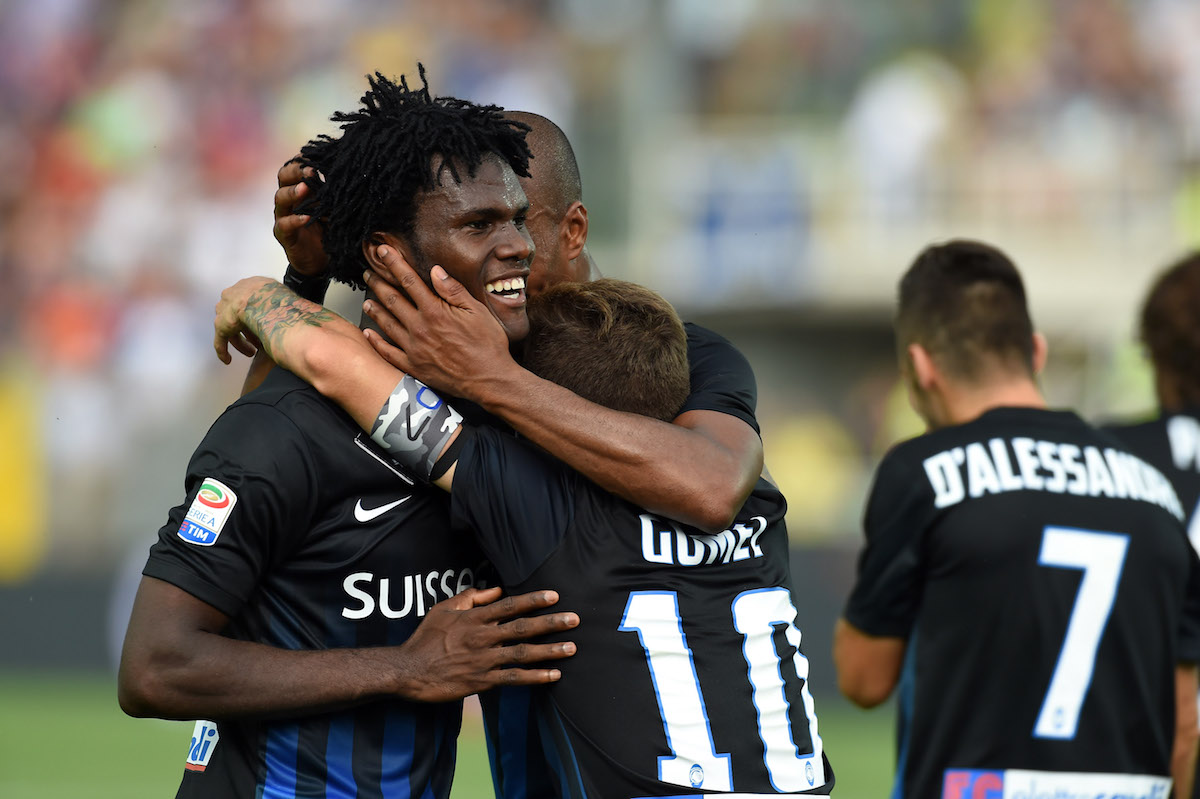 Hailing from Ivory Coast, comparisons with Manchester City powerhouse Yaya Toure were inevitable once Kessie began to gain notoriety. A better benchmark, though, might be former Chelsea midfielder Michael Essien.

Thriving in a box-to-box role within the Atalanta midfield, Kessie’s skillset is incredibly well-rounded for one so young. Although he might not yet have the same ability to drive from midfield and seemingly score at will as a prime Toure used to, he isn’t too far behind the ex-Barcelona man in that regard, and is already more cognisant of his defensive responsibilities than his legendary compatriot.

That’s why the Essien parallel is perhaps more apt. The former Chelsea man – who was himself a United target before swapping Lyon for Stamford Bridge – was dynamic in all phases of play. He would diligently press the opposition, work back and make tackles and interceptions, while also possessing the ability to push his team forward with crisp, technically proficient short passes; all of these attributes are mirrored in Kessie.

United will be on the hunt for a long-term replacement for 35-year-old Michael Carrick at the base of their midfield before too long, and Kessie’s tactical discipline could see him eventually moulded to suit that role. 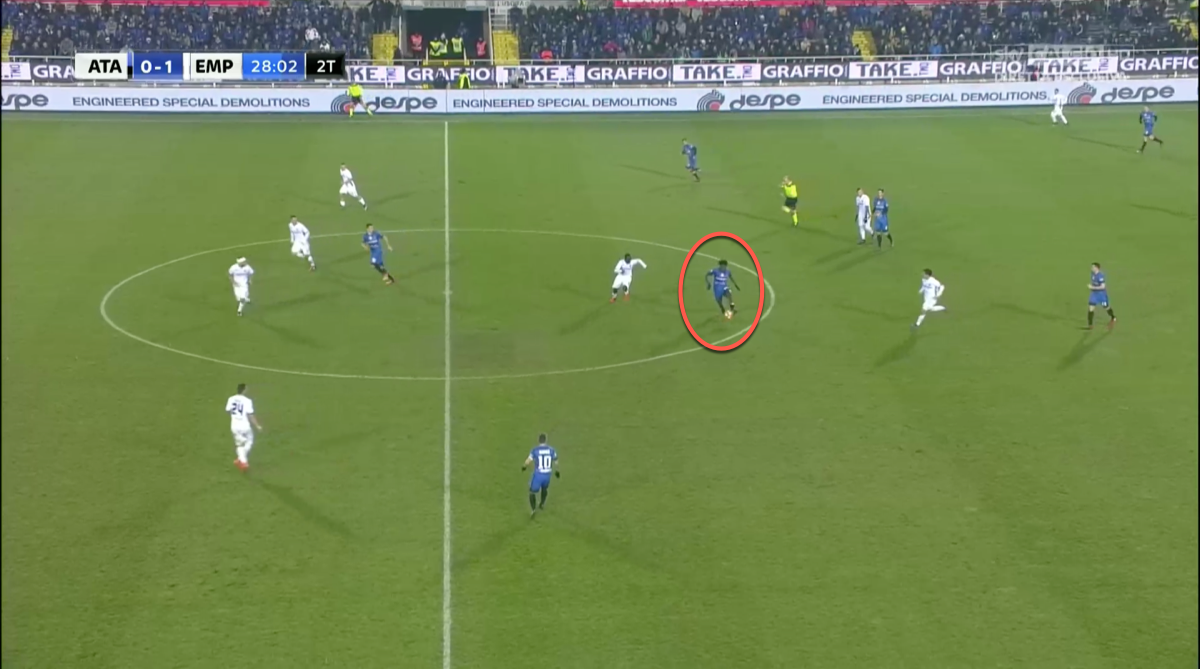 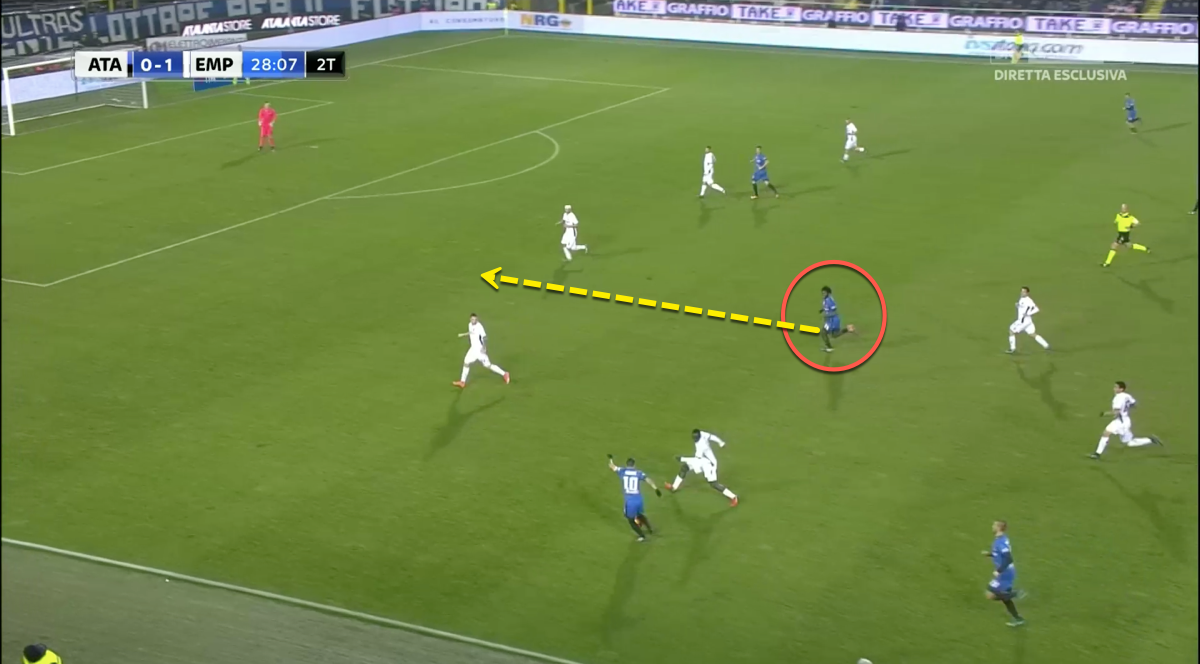 However, his gifts are better suited to playing slightly further forward at the moment, with the freedom to move into attacking zones, occasionally breaking ahead of the ball.

His ability to compete at the highest level has played no small part in Atalanta’s unlikely rise to sixth in Serie A this term, making the prospect of European football a reality for the side from Bergamo.

Athletic and strong, Kessie is physically mature and capable of holding his own in the Premier League. His upper-body strength allows him to shield the ball in a way reminiscent of current United standout Paul Pogba, and it certainly doesn’t go amiss when engaging on one-on-one dues for possession.

With pressing becoming an increasingly key facet of many teams' gameplans, the 10-cap Ivory international is effective on both sides of the ball – whether closing down the opposition, or helping break the lines of a rival’s press. 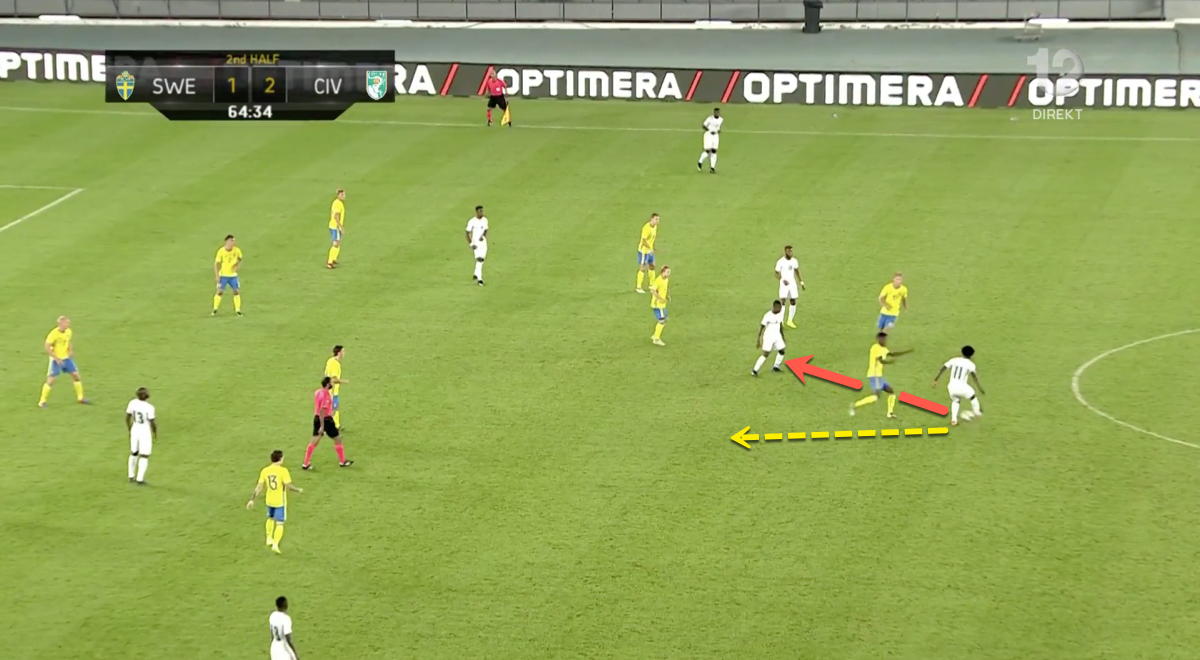 Quick across the ground over short distances and unafraid to put in a shift, Kessie will put pressure on the ball for a full 90 minutes if asked to do so.

His ability to link with advanced team-mates and recognition of space sees him comfortable in confined areas, playing neat one-twos and intelligently moving forward into pockets of space to break the opposition’s pressing lines.

Kessie has also managed to find the net seven times in all competitions so far this season. His willingness to get into the penalty area has helped him sniff out chances with the instincts of a refined poacher, finishing well with either foot. It has also helped that his clean shooting technique and coolness under pressure has seen him become Atalanta’s designated penalty taker. 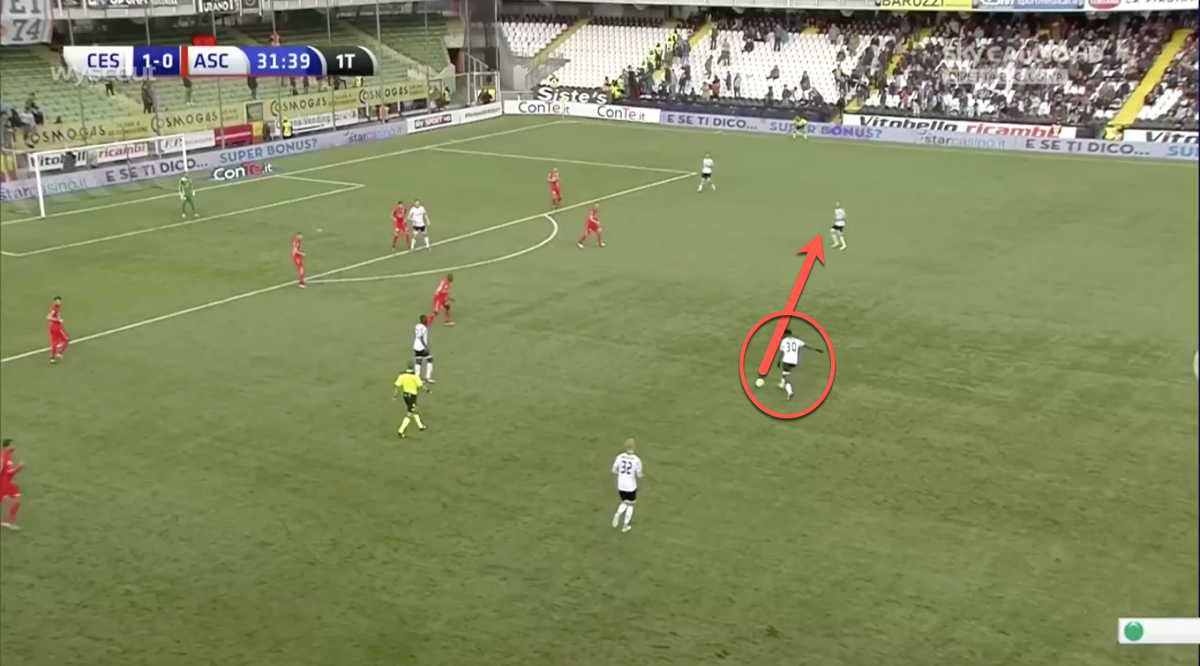 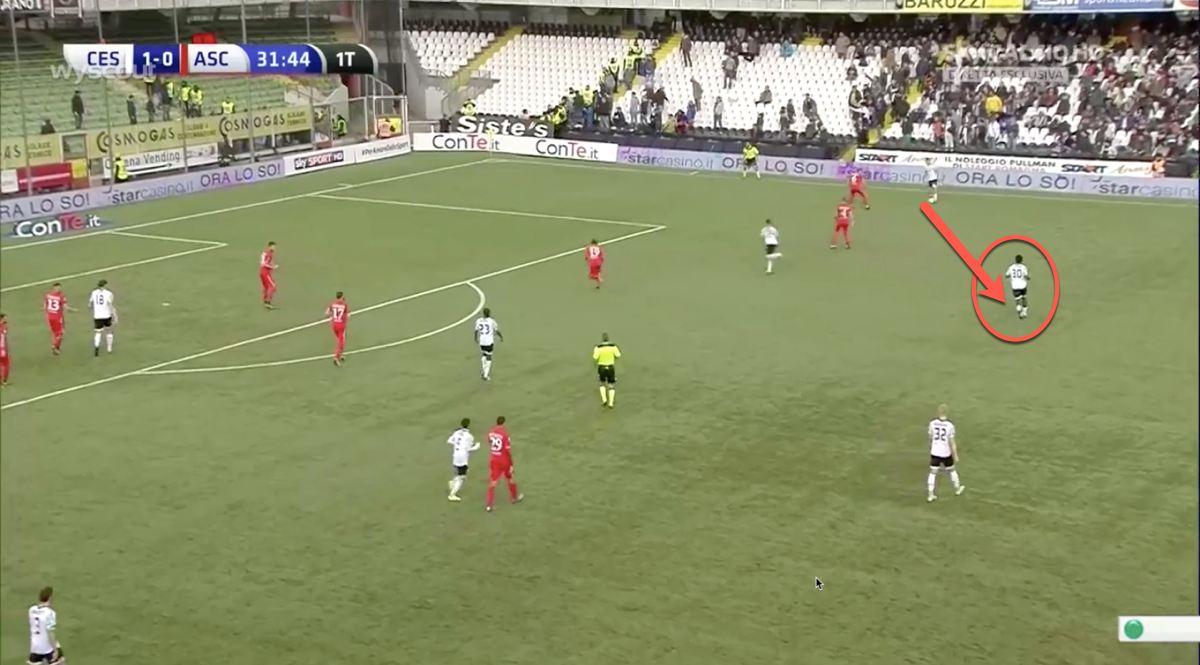 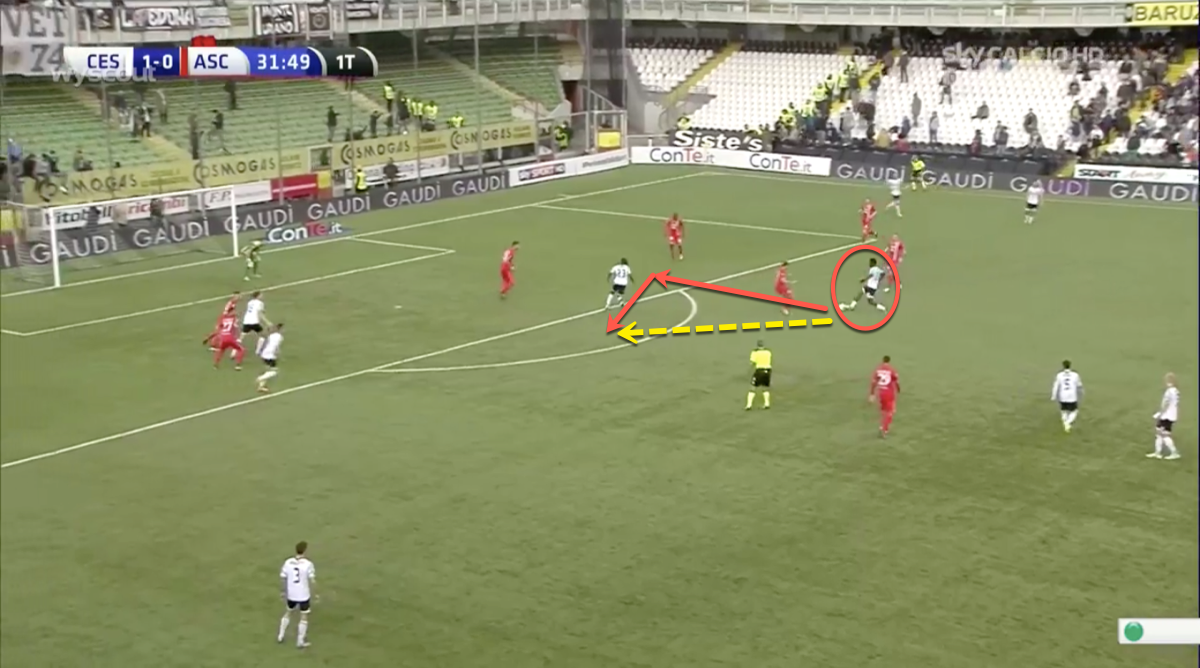 One area of Kessie’s game that might need a little more refinement is his first-touch. Though far from the kind of drastic issue that will hold him back from reaching the top of the game, his average of being dispossessed 2.4 times per game is something Jose Mourinho might see and a potential sticking point when weighing up a move for the youngster.

Rather than any technical deficiency, this can just as likely be explained by Kessie’s willingness to take responsibility and get on the ball despite being tightly marked. More experienced players would shy away from such a challenge, and encourage the ball to be played to a colleague in space, but the Atalanta man seems to be constantly thinking of how to help his team progress up the pitch, even if that means taking the odd risk.

If he is to be shaped into a Carrick-style deep-lying playmaker of Old Trafford, this is a trait that Mourinho will seek to coach out of Kessie, but in a box-to-box role, it is far less of an issue provided these risks are taken in the right areas.

As discussed above, there is scope for Kessie to take the mantle from Carrick at the base of United’s midfield – he certainly has the potential to grow into that role.

However, if the Red Devils decide to splash out the kind of money that it would take to secure his signature, they will want to extract every drop of potential from their new man, and that would mean playing him in his natural position.

With Pogba’s spot on the left of a midfield three assured – although the Frenchman often operates in a strange kind of free-role from a double pivot at home against inferior opposition – Kessie’s most likely positional rival would be Ander Herrera.

The Spaniard, signed from Athletic Club for £28million in 2014, has rubber-stamped his status as a key player for the Red Devils this term, bringing balance to the midfield from his box-to-box role opposite Pogba.

Excellent on the ball and able to play incisive forward passes, it is Herrera’s work-rate and tactical intelligence that makes him so vital for Mourinho’s men.

The 27-year-old La Roja star averages a phenomenal rate of 3.3 interceptions and 3.2 tackles per 90 minutes in the Premier League – Kessie falls short of this level of defensive output with 1.5 tackles and 1.4 interceptions. Herrera is also dispossessed just 0.9 times per 90 minutes, compared to Kessie’s 2.4.

However, the Ivorian betters the Spaniard in one measure of midfield tenacity, as he is dribbled past just 0.6 times per 90 minutes to Herrera’s 2.2. 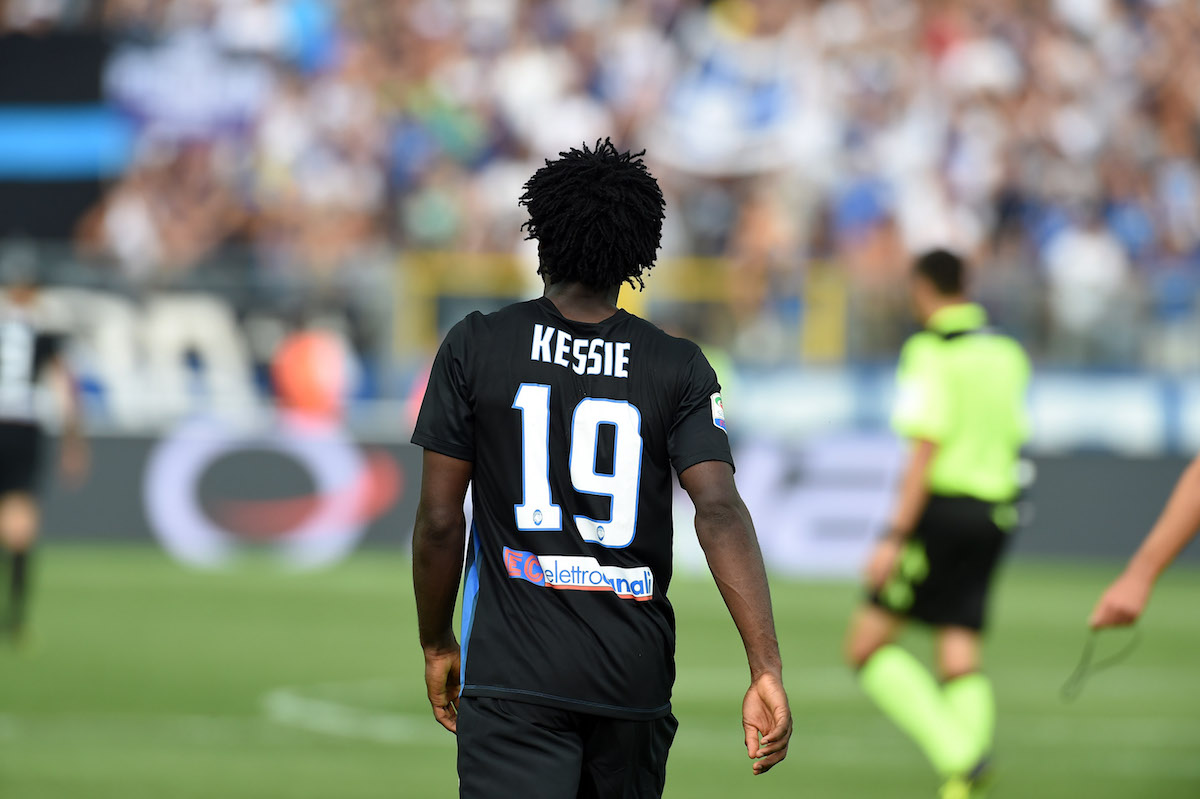 Herrera boasts a better pass accuracy than Kessie (88.5 per cent to 84.2 per cent), although the 20-year-old falls pretty much in line with United’s team average of 84.7 per cent – which is second only to Manchester City (84.8 per cent) in the Premier League this season. Were Kessie to join United, his average would likely rise to near Herrera’s level thanks to the increased technical quality of those around him.

Kessie is a far more potent goal threat than Herrera, who is yet to score in 1819 minutes of Premier League action this term, while the Atalanta star is currently averaging 0.3 goals per game in Serie A.

Likely to cost around €30million, Kessie would be a relatively cheap option to boost United’s midfield compared to recent purchases.

However, if Mourinho is prioritising a direct heir to Carrick, there may be more suitable alternatives.

The Red Devils do lack depth in midfield, however, and with Kessie's vast potential and already high current level of ability, he’d be a sound addition to deputise for Herrera and eventually replace the Spaniard.

Furthermore, the acquisition of Kessie would enable Mourinho to shift Herrera into the deep-lying playmaker role on a permanent basis if he so chooses, after the former Athletic Club midfielder has impressed in the position while filling in for Carrick this term.

Considering the potential price tag, the player’s desire to sign for the club and the fact that they would be poaching one of Chelsea’s primary targets, United pursuing Kessie in the summer would make a lot of sense.