France and Wales lock horns ahead of the European Championship looking to build up some momentum and confidence. Nice is where the two teams will meet on Wednesday and although this game is a friendly, France are expected to win comfortably as their squad is packed with some of the best players in world football.

Read on for our full match preview and prediction for France vs Wales.

Our Top Tips for France vs Wales

Although France kept a clean sheet when they last locked horns with Wales in 2017, winning 2-0,  the host shave conceded goals in each of their last three home games. However, France have won four of their last five international matches and we're backing Didier Deschamps' men to extend their winning run to three straight games on Wednesday night. Wales have been in decent form of late but mostly at home, losing two of their last four away trips.

France have an abundance of goalscorers in their squad and it is difficult to see this game producing fewer than three goals. Ben Yadder is a natural finisher but might not make the starting lineup ahead of the likes of Benzema, Dembele, Coman, Mbappe, Giroud, or Griezmann, while Pogba provides a goalscoring threat from the centre of the pitch. Mbappe is probably the world's most talented young forward right now and he will be looking to add to his 16 international goals in his 43rd appearance for France on Wednesday. Wales possess goal threats of their own in the form of Bale and Ramsey, whilst it's worth mentioning Moore up-front as he has enjoyed a good season in front of goal for Cardiff City.

We're backing France's main man to get on the scoreboard against Wales as he has already scored 16 times for his country in 42 appearances. Since joining PSG on loan and then permanently from Monaco, Mbappe has scored 132 goals in 171 games for the French giants, scoring 42 goals in all competitions this season. If France are going to win the Euros this summer then it is highly likely that Mbappe will be the driving force behind their success.

France the favourites to beat Wales at the Allianz Riviera

France have called up almost all their regular players ahead of the Euros but there are a couple of familiar names that do miss out due to injury or not playing enough regular football this season, including Martial, Fekir, Ikone, Camavinga, Nzonzi, Ndombele, Upamecano and Mendy. We've already talked about the attacking talent in this side but their midfield is equally talented with the likes of Pogba, Tolisso, Lemar, Kante, and Rabiot all vying for starting roles. The defence looks solid and is packed with winners, from Bayern Munich's Pavard and Hernandez to Varane of Real Madrid and in goal will be the 123-times capped Lloris.

Wales' goalkeeper Wayne Hennessey is just 5-caps from joining Gunter in the 100 club and could reach that milestone at the Euros. Ben Davies is a leader at the back for the Welsh and he will need to be as five of his fellow defenders are aged 23 or under. Ramsey offers goals from midfield but hasn't played a whole lot of football this season with Juventus and is expected to leave the club this summer. Up top, the visitors have Gareth Bale who has already scored 33-goals in 90 appearances for his country, while Kieffer Moore will be hoping to make a name for himself this summer following a really impressive campaign in the Championship. 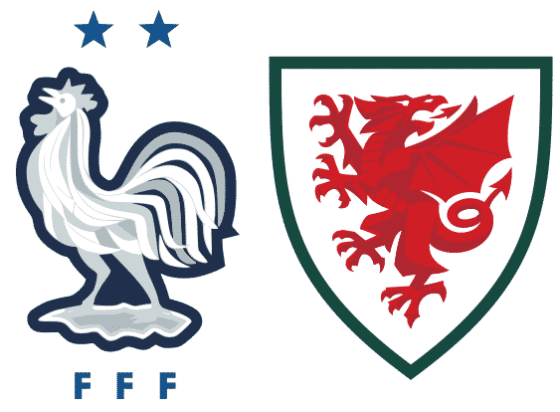