After 50 games of intense drama, just two teams remain in the hunt to be named kings of Europe. Both France and Portugal will have high hopes of lifting the Henri Delaunay trophy on Sunday; let’s take a closer look at their respective journeys – not only this summer, but throughout their footballing histories.

For one of Sunday’s finalists, Euro 2016 will be the crowning glory of a generation. After all, it has been 16 years since either France or Portugal tasted glory on the big stage and 12 since the last time either reached a major final. Regardless of the outcome, it will be a historic climax to the summer showpiece.

As the host nation, expectations on Didier Deschamps’ men have been palpable from the word go. Aside from boasting one of the Europe’s most enviable attack lines, which could even afford to omit both Karim Benzema and Alexandre Lacazette, Les Bleus also have the weight of history on their shoulders. France has hosted two previous tournaments in the last 50 years; on both occasions, in 1984 and 1998, they tasted the ultimate glory. Subsequently, anything less than the trophy will be considered failure – and that includes losing to Portugal on Sunday.

Perhaps equally important to the equation is the manner in which France play. Internationally, French football has an unmistakable arrogant swagger instilled into its footballing DNA, not least because each of those previously mentioned home tournament victories was spearheaded by sporting geniuses. In 1984, Michel Platini’s undiluted brilliance hit an all-time peak as the iconic No.10 scored in each of the host nation’s five matches en route to the title. Eight editions later, his haul of nine goals has only just been matched following Cristiano Ronaldo’s thumping header against Wales; while the current Portugal captain has spread his tally over four editions and 20 matches, those five matches in ‘84 encompassed the entirety of Platini’s European endeavours.

Eighteen years later, Les Bleus went one better by clinching their first and only World Cup trophy to date. While the 1998 triumph was explicitly more of a team effort than in 1984, the No.10 was still very much the focal shirt in France’s lineup. This time, the elegance artistry of Zinedine Zidane provided the extra magic throughout the host nation’s run to final, coming to climatic fruition thanks to two headed goals in the final against a much-fancied Brazil. While that encounter at the Stade de France, a stadium which had been built purposely for the tournament, is probably most remembered for the pre-game drama surrounding Ronaldo’s health, Zizou had been the architect of France ruling the world.

France has played host to two other major tournaments, in 1938 and 1960, but it’s the two in living memory that stand out. Ultimately, those successes combined with the immense quality of Didier Deschamps’ squad is why they entered the tournament as joint favourites (alongside Germany) with the bookies. 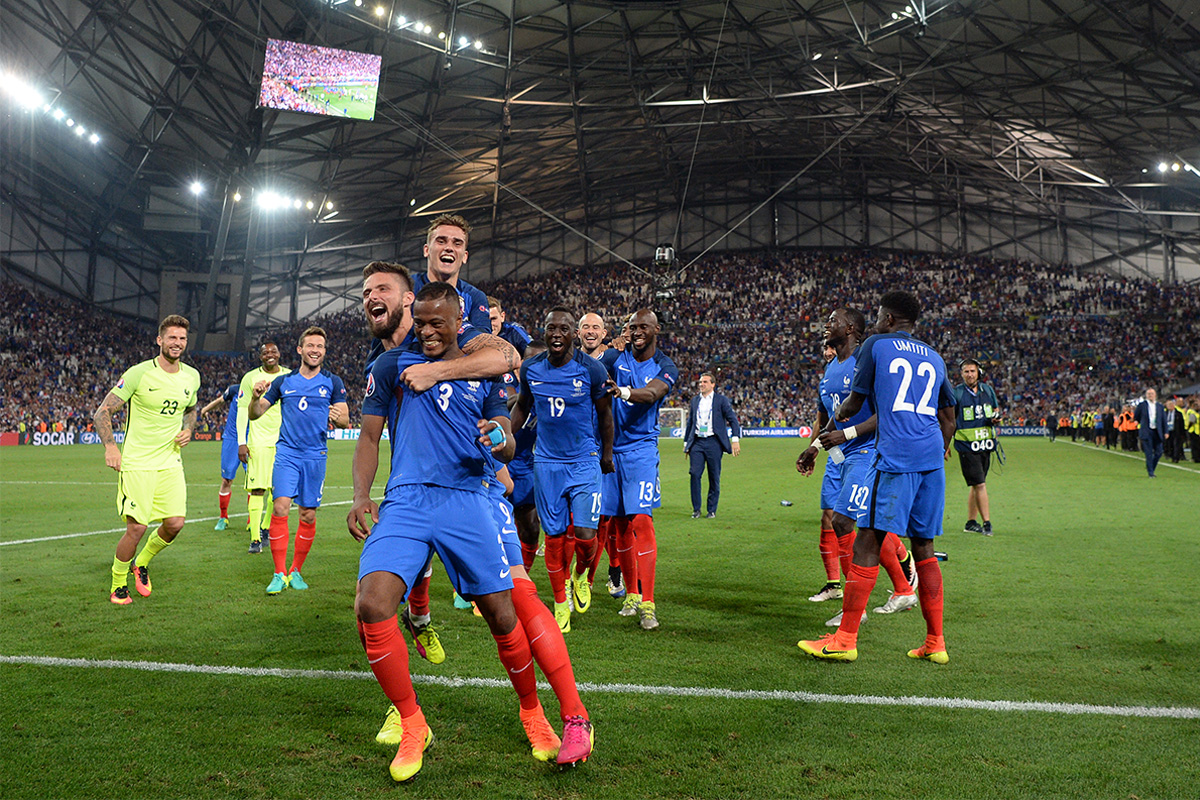 Having bypassed the qualification process, as a virtue of being hosts, forecasting exactly how well Les Bleus would perform proved impossible. A narrow quarter-final defeat to eventual winners Germany two years ago didn’t really offer too much indication, especially as 11 of France’s 23-man squad in 2016 weren’t present in Brazil. But, despite some nerves, the hosts have performed brilliantly throughout. Dimitri Payet has lit up the tournament with his dazzling skills while Antoine Griezmann has confirmed himself as one of the game’s most lethal finishers. Aside from the fact that the No.10, Andre-Pierre Gignac, has barely had an influence, this has been a team befitting the moniker of ‘France at a home tournament'. However, it’s the next 90 (or possibly 120) minutes that will truly dictate how this incarnation of Les Tricolores is revered in years to come.

In truth, even the trophy won’t cement their place as the greatest generation of Les Bleus superstars. To clinch that title, they’d have to do what the 1998 winners did: win the biggest trophy of all. After all, France’s only World Cup-winning team followed it up by lifting the Henri Delaunay trophy two years later at Euro 2000. However, if the current crop of French stars can win both Sunday’s final and then the World Cup on foreign soil in Russia, they will surely go down as the country’s best.

Sometimes, though, triumphs on the pitch can transcend the sport. Bill Shankly famously quipped that football is more important than life or death, but the events of November 13th last year put the true realities into perspective. Nearly eight months on, France is still in mourning following the Paris attacks, and the nation’s vulnerability has been transparent throughout the organisation of this entire tournament. Victory on Sunday wouldn’t just be an accomplishment for the team; it would provide a whole country with a unifying lift that it so desperately craves. Of course, nothing in football can ever repair the heartbreak that fatal Friday night. But perhaps now more than ever, the nation could do with a victory.

For those reasons, this would be France’s greatest ever achievement. However, there’s no room for sentiment in football and Portugal cannot let non-sporting matters stand in their way. After all, Fernando Santos’ men are now just one win shy of clinching their own piece of sporting history.

Portugal’s performances on the big stage throughout the 20th century were rarely anything to write home about but, since Euro 2000, they’ve accumulated more European Championship semi-final appearances than any other nation. Yet, despite being one of the continent’s most reliable nations in recent times, A Selecao remains arguably the biggest side yet to taste the ultimate glory at a major international tournament.

Those failings have often seen Portugal lumped in the same bracket as England; in truth, that does a little disservice to the Southern European nation. Over the past 20 years, they’ve reached at least the quarter-final stage in all six editions of the competition, and the only thing stopping them from shaking that tag of perennial underachievers is a trophy. Sunday could be their springboard to finally joining the top table of international football. 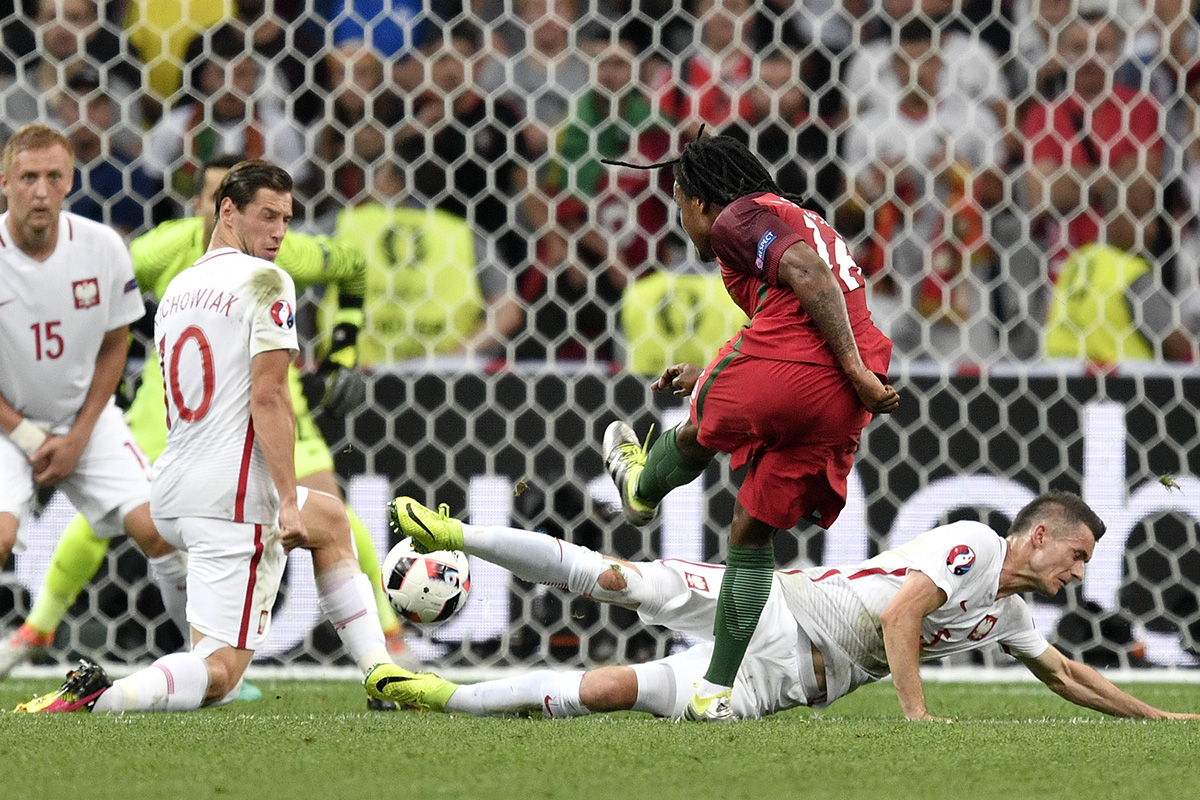 If Portugal's football infrastructure is to build upon any success gained from this summer’s adventure, it will need to unearth a long-term superstar to receive the baton of responsibility from Ronaldo. The Real Madrid phenomenon has essentially carried his nation for over a decade, becoming the country’s record scorer and appearance maker in the process. At 31, this could be the last tournament where he is truly at the peak of his powers; with the stage set to become the competition’s sole all-time leading marksman while delivering his nation’s first ever international trophy, this could be a fitting international finale for one of the game’s greatest ever talents.

Even if this isn’t to be Ronaldo’s international swansong, the Portugal skipper will be desperate to make the most of this glorious opportunity. Both he and veteran defender Ricardo Carvalho are survivors members from the losing finalist squad of 2004, which should have beaten shock winners Greece in the final to lift the trophy on home soil. Fast-forward 12 years from one of international football’s great underdog stories and Europe’s greatest attacking superstar will view this as his shot at redemption. For all his triumphs at club level, the game’s hardest worker will see his glittering CV as unfinished until an international honour is added. Sunday’s showpiece at the Stade de France could be his date with destiny.

It seems a little unkind to his teammates to place so much emphasis on one player, but Ronaldo truly is his country’s most important player ever. Portugal has produced a handful of genuine world-class stars, but even Luis Figo and Eusebio cannot match the current skipper’s significance. Winning the title would only further solidify the captain’s place atop of the Portuguese sporting pyramid.

While the wounds of 2004 are still very fresh in Portugal’s collective minds, Sunday’s final will be the country’s first on foreign soil. But having dropped out at the last four stage in Poland and Ukraine in 2012, the slight underdogs will be determined not to fall at the final hurdle in Saint-Denis. A lot has been made of Portugal’s inability to win a game in 90 minutes before Wednesday’s triumph over Wales in Lyon. However, this is a team that has grown into the tournament and gained confidence with each added experience. In many ways, their performances in France run parallel to the country’s history in the competition. For both the class of 2016 and Portuguese football as a whole, lifting the famous trophy on Sunday would be the rewards of slow but steady progress.

It’s virtually impossible to predict a winner with any real conviction, which is why it should be a thrilling spectacle from start to finish. For the losing nation, Sunday will serve the toughest heartbreak of all. But one way or the other, a great footballing nation will accomplish something truly remarkable.

And for one player, immortality beckons.