There’s almost a foot in height difference between Paul Pogba and N'Golo Kanté.

They look like they should be playing different sports, and yet have forged such a successful partnership at the heart of France’s midfield.

Didier Deschamps has come in for some criticism about how his team has played at this World Cup, though. With the array of attacking talents that the country has at their disposal, Les Bleus have not been the scintillating team everyone hoped they’d be.

The set-up, though, has kept them incredibly solid at the back, conceding the fourth-fewest expected goals per match of the tournament (0.61).

Pogba and Kanté are a big part of this, and perhaps too little credit has been given to the Manchester United man for his defensive solidity. Kanté’s talent for hounding opponents and winning back the ball is well-known, but Pogba has been seen before, by some, as ill-disciplined and defensively lax. It’s part of what has contributed to the perception that he can only really excel in a midfield trio.

However, during this World Cup, he has shown that he can excel in a duo, and the pair have complimented each other well.

While Kanté’s role is limited, almost completely, to build-up play passing and defensive activity, Pogba has had a bit more of a well-rounded game in the tournament – but not much.

Together, they stop an awful lot of attacks, averaging 8.09 tackles and interceptions per 90 minutes. Kanté takes up a lot of the load, 5.49 of them, but then it’s Pogba that moves the ball when France win it back.

Even so, Pogba’s role is a marked change from the role he’s played in club football. There, he tends to stride forwards and become part of the attack, but in this France side that both isn’t as necessary and isn’t his role.

‘Ill-disciplined’ claims be damned; Pogba managed just over three touches inside the opposition box and total shots per 90 minutes for Manchester United in 2017/18, but for France, these are down at just 1.2 and 1.0 per 90. 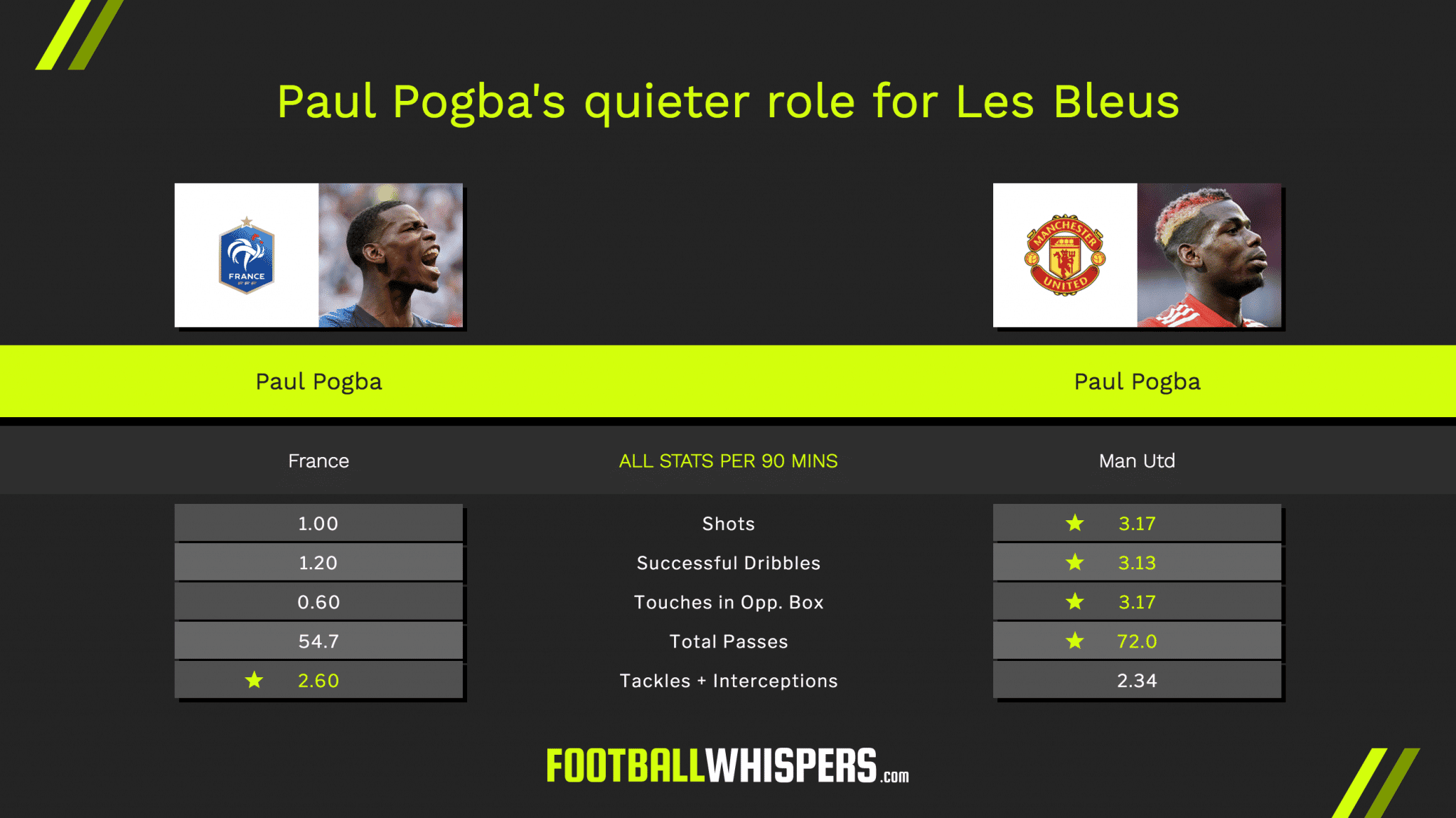 Perhaps this defined role, a seemingly far more defined role than Pogba usually has, is the real secret to getting the best out of him. His skillset is so wide that it’s natural to want him to do a bit of everything, but perhaps that leaves him spread over too much of the pitch.

The Pogba-Kanté axis will be crucial for France in the World Cup final. Croatia have shown in earlier rounds that they can be dangerous on the break, and both midfielders will be able to deal well with this.

They’ll also offer danger in attacking transitions. As well as being a fantastic ball-winner, Kanté can carry the ball up the field well, as can Pogba. The latter’s eye for a pass, and ability to make them, means he’ll also be able to make passes for Kylian Mbappé or Antoine Griezmann to run onto.

His height will also be helpful – Croatia have made the second-most crosses per game of any country in the competition, and Pogba’s proximity to France’s back-line will mean that he will be able to easily slip in as an extra defender where needed.

More simply, though, France will need to continue to have the solid base – in and out of possession – that the two players have given the team so far in the tournament.

Deschamps also knows that, if Croatia manage to stifle his attackers, he has Pogba waiting in midfield, ready to turn up the dial on his attacking threat. They haven’t needed it so far, but it could be France’s hidden weapon.