With 70 minutes played and the scoreline tied at 1-1, France were in trouble. Among the favourites to win this summer’s World Cup, Les Blues were struggling to lift themselves to break down Australia in their opening group fixture. And so Didier Deschamps turned to a familiar face, introducing Olivier Giroud off the bench.

For a such a modern team with such world-class talent, this was a decidedly analogue move from Deschamps. Giroud is an old-fashioned sort of frontman not exactly in the mould of dynamic attackers like Antoine Griezmann, Kylian Mbappé and Ousmane Dembélé. And yet his introduction off the bench had the desired effect, with France grinding out a 2-1 win.

It was a similar story at the European Championships two years ago. Griezmann would go on to clinch the Golden Boot for the tournament, but the Atletico Madrid forward was dropped for France’s second group game against Albania after a less than impressive showing in the curtain-opener against Romania.

So why can’t France, in particular, Deschamps, let go of their reliance on Giroud? After all, this is a group of players that should have moved on from depending on the 31-year-old. So why can’t Deschamps get a tune out of his team without using Giroud as an orthodox focal point to play off in the final third?

Of course, it’s not so long ago that Giroud looked to be struggling for a place in France’s World Cup squad. Had he stayed at Arsenal, where he was a peripheral figure, for the full 2017/18 season, the 31-year-old surely would have missed out. But by moving to Chelsea in January, Giroud revived his national team chances, and now France’s World Cup chances could depend on him.

Against Australia, Giroud didn’t even manage a shot on goal in the 20 minutes he was on the pitch. But while he might be played as a striker, the Chelsea man isn’t used for his productivity in terms of goals and shots on target.

Instead, he is deployed as a wall to play off and he completed both of his forward passes into the final third, contributing an assist for France’s eventual winner. In total Giroud only made three passes, but completed all of them and made them count. 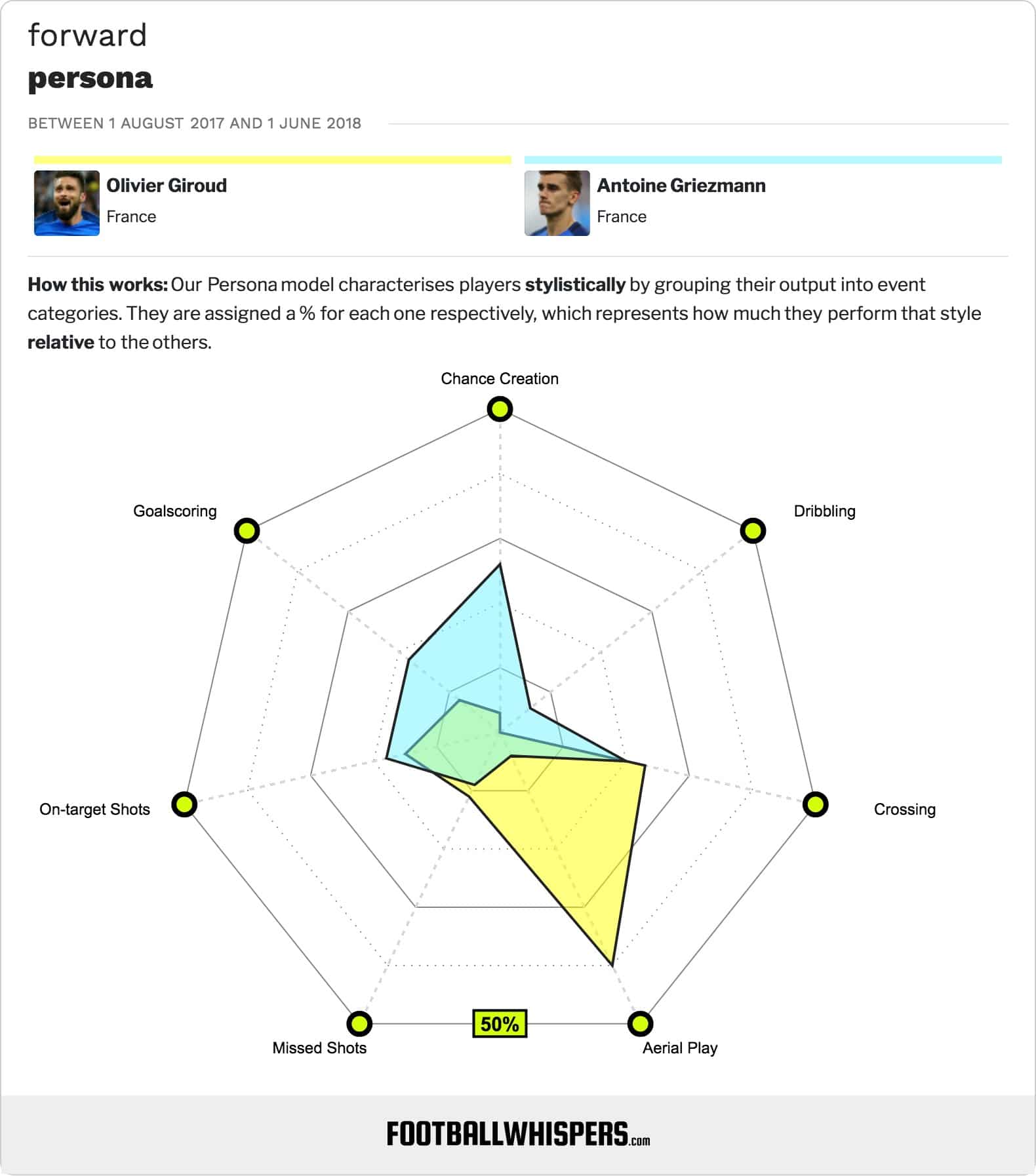 Compare this to Griezmann, who was much more involved in France’s general play, but only completed 59 per cent of his total passes. He also got four shots away on goal, but only two of them found the target. Only two of his six forward passes over the course of the 70 minutes he played were successful.

Looking at the heat map, it’s easy to determine the differing roles between the two players. The vast majority of Griezmann’s action came around the edge of the opposition penalty area, while Giroud was used as a target to aim for inside the box.

That might have come as a result of France’s desperation as time ran out, but by pushing Giroud deeper into the final third, space opened up for others around him, like Paul Pogba who forced the winner.

Not for the first time, Deschamps has already come under fire for his tactics at this World Cup. Many French fans have lost faith in their manager, with some still holding the failure to win Euro 2016 on home soil against him. This is a golden generation for Les Blues and they are right to expect silverware at some point.

The problem for France is that they frequently come up against sides happy to sit deep and absorb pressure when Les Blues’ qualities lend themselves to more of a counter-attacking philosophy. Players like Griezmann, Dembélé and Mbappé are rapid on the break and it might not be until they face a higher calibre side that they are able to show this.

Perhaps this is where Deschamps could have used someone like Dimitri Payet to break open opposition defences from a position in behind the central striker as a number 10. But with the Marseille playmaker left out of the squad for this World Cup, Deschamps has little option when he wants to change things up to turn to Giroud.

It’s a scenario that’s somewhat reminiscent of Brazil’s use of Fred at the last World Cup four years ago. Giroud is a far better striker than Fred, but both players were the odd ones out for their respective national teams. Fred was also asked to play as an attacking focal point for more dynamic teammates, like Neymar, around him.

That didn’t work for the Selecao four years ago and the early indications for France at this World Cup haven’t been so positive. But if Giroud is the catalyst for getting more from Les Blues’ best players, then his continued use can be justified. It might not be tactically revolutionary, but its effectiveness is proven, to a certain extent.