Leicester City are in limbo. They're eighth in the Premier League, a point off of Burnley in seventh and a point clear of Everton in ninth with 11 games to play. In isolation it's a good place to be as we enter the business end of the season, but the Foxes are just eight points clear of safety.

They've won just two of their last ten Premier League matches and there's a chance they could get dragged into the relegation scrap. Claude Puel can't delve into the transfer market to turn things around and it's too risky to change tactics or their system.

The obvious answer would be to shore things up and be a little more conservative in their approach. But Leicester's biggest problem isn't their defence. They've conceded 40 in 27 matches – five of which came against Manchester City in their last Premier League outing – and only three of the 12 teams below them have conceded fewer goals.

There's nothing there that should be of huge concern for Puel and his coaching staff. However, Leicester's issue comes from corner kicks and this is something that can be worked on during training sessions.

In a recent feature on Football Whispers, we looked at the corner kick kings and the stats revealed the Foxes are one of the worst teams in the Premier League when defending them.

Despite the summer arrival of rumoured Manchester United transfer target Harry Maguire to partner the aerially dominant Wes Morgan, Leicester have conceded the second highest number of goals from corners this season.

Along with Brighton and Hove Albion, Leicester are the only team in the league to have conceded ten or more goals from corners this season. In an astonishing stat, 27.5 per cent of the time they've been breached the goal has come from a corner.

The Foxes are, on average, conceding 1.48 goals per match but just 1.1 of those come in open play. For a team famed for its resilience, it's bizarre to see just how soft they are when it comes to defending corners.

Of the 168 corners they've faced, 5.95 per cent of them have ended up in the back of the net, up on the league average of 3.2 per cent. It's a surprise when you consider three of their players rank in the top 45 for aerial duels won in the Premier League.

They aren't the only team to have trouble when it comes to defending corners. Liverpool‘s issues are well known with Jürgen Klopp's decision to use zonal marking being a hot topic of debate on Sky Sports' Monday Night Football show. There's always a grey area when divvying out blame because the understanding of it is still blurred.

Puel, however, chooses to use a man-marking system which makes it easier to figure out what's going wrong and why. We've looked back at the goals Leicester have conceded this season in an attempt to judge whether it's an easy fix on the training pitch or whether the issues are deep-rooted.

More often that not, Leicester concede because someone switches off. It's as simple as that. It's evident in the goal they conceded to Swansea City. 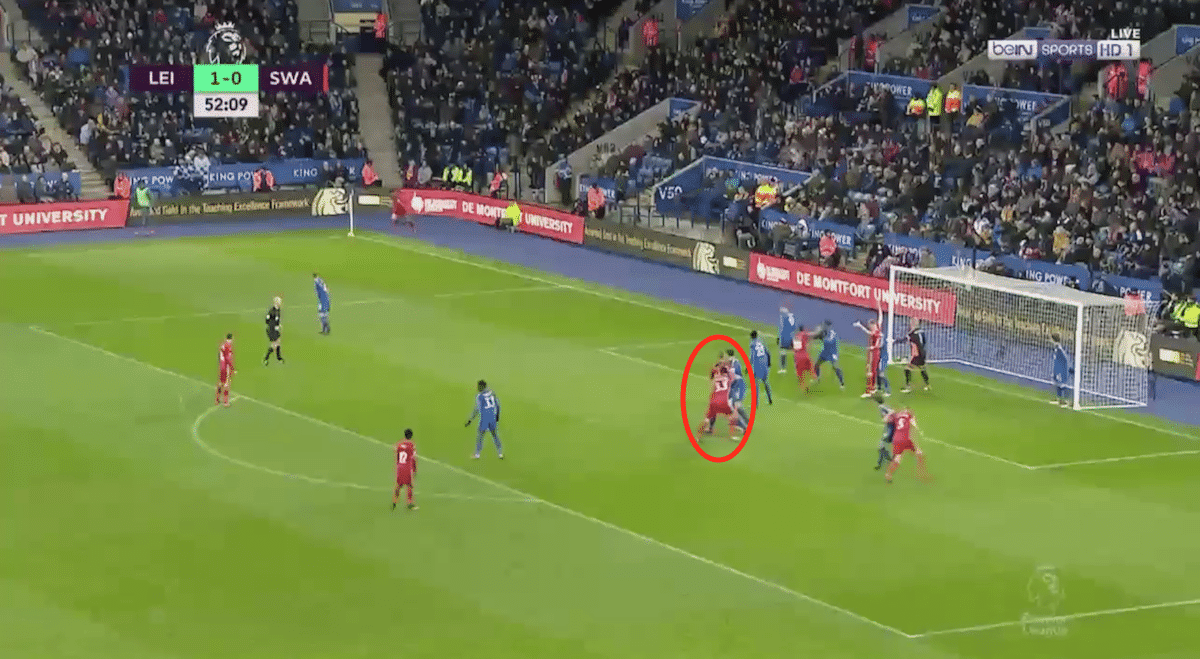 In the picture above you see Christian Fuchs and Federico Fernández circled in red. The pair, like many others, are jostling for a position as the ball gets swung into the penalty area. You can see above that it's a man-for-man system with an extra player ahead of the near post and another on the back post. 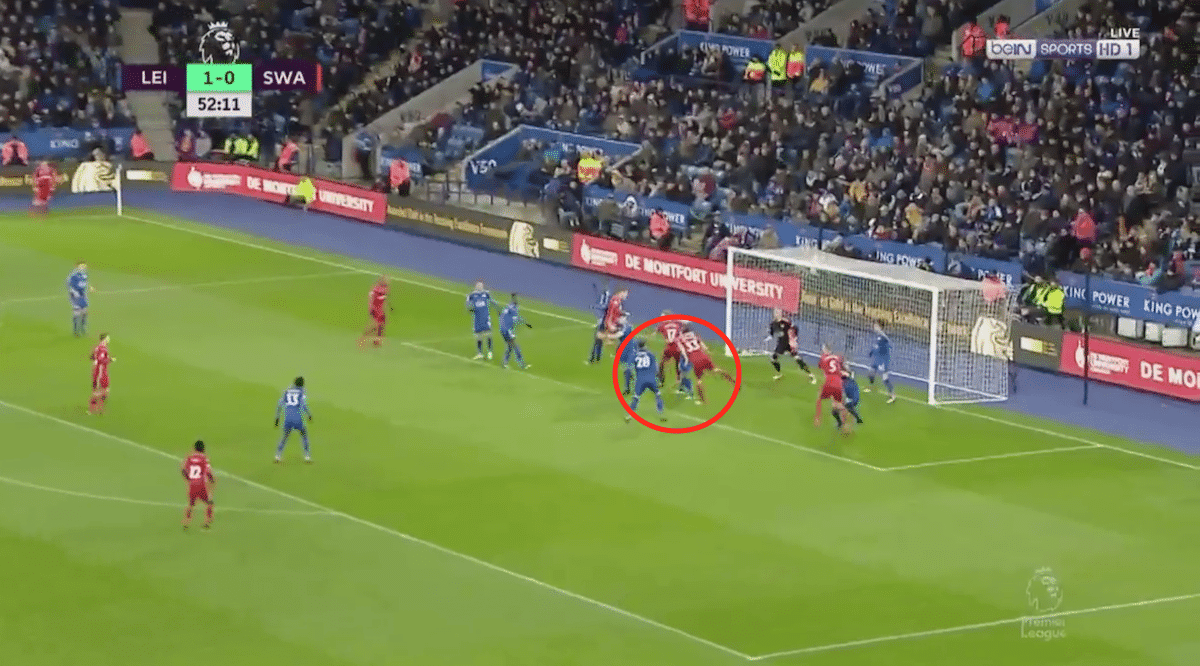 The second picture is taken just as Fernández meets the ball. He's freed himself of Fuchs' attention and has a run on the Maguire. You can see the Austrian full-back looking looking right at the Swansea centre-back as he heads the ball home. Fernández was able to easily evade his marker to grab the equaliser.

The same thing happened against Peterborough United in the FA Cup. Fuchs was slow to react and the man he was supposed to be keeping tabs on was able to fire the ball home. It mattered not at the time, with Leicester comfortably running out as 5-1 victors.

However, the Foxes' No.26 isn't the only player guilty of this.

Maguire, praised for his performances this season, has been slow to react in a number of matches. Against Watford he was drawn to the ball and it allowed former Fox Molla Wagué an easy tap-in at the back post.

Against Swansea earlier on in the season, Maguire was slow to react again, this time allowing Mawson to take a touch and turn before firing the ball past Kasper Schmeichel. The former Hull City man should've been much closer.

Jamie Vardy was caught on his heels when Marcus Rashford fired home for Manchester United. It's not often you can say that about the the Leicester striker. This happens in all teams and it's down to players mentally switching off for a split second.

Wilfred Ndidi was outmuscled for the West Ham United goal as was Fuchs for the Stoke City one. Olivier Giroud bullied Maguire and Morgan when he nodded home the winner in the opening game of the season. Again, it happens. It's frustrating but sometimes a player is just better in the air and you have to take it on the chin.

An alarming trend, however, is how often the Foxes seem to get drawn to the ball. It happens under Puel just as it did under his predecessor, Craig Shakespeare. You can see it in all of its full glory against Arsenal. 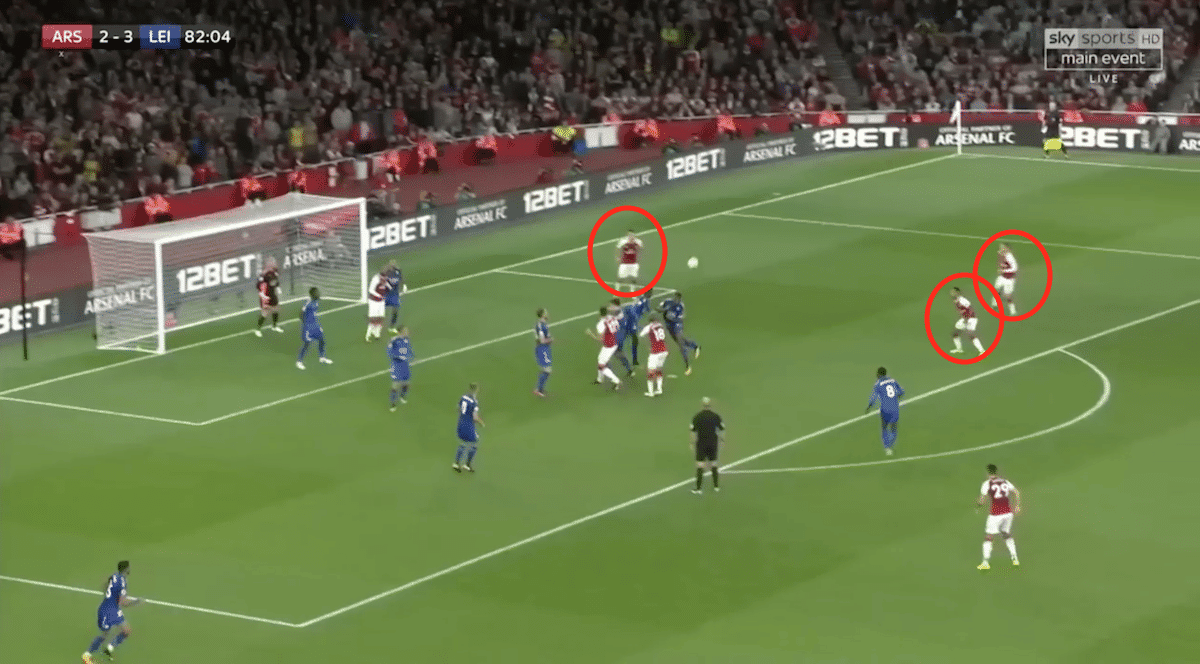 The Leicester players initially defending the back post get drawn to the ball in the central area. It's cleared but just look at how many Arsenal players are unmarked inside of the penalty area. It's just asking for trouble. 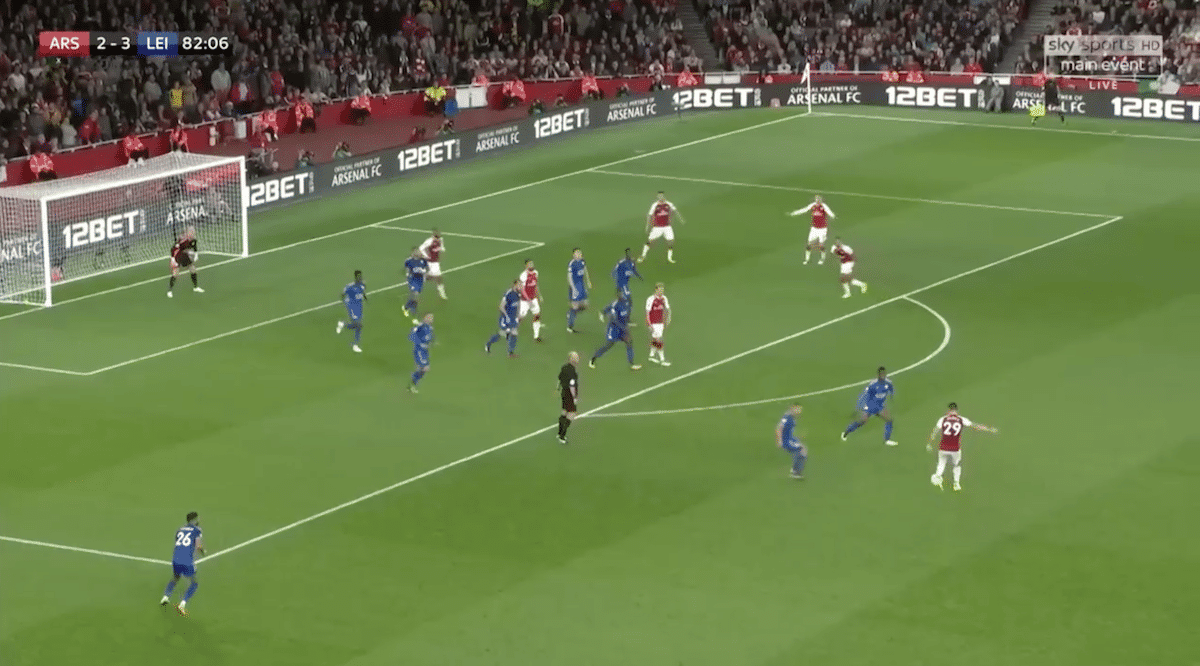 Granit Xhaka picks the ball up on the edge of the penalty area and, though fronted by two Leicester players, is able to float a pass into the penalty area where he has three targets to hit.

Leicester players, as you can see in the picture, aren't even looking to cover the space on the left of the box – they're all looking at the ball. It's not the sort of defending you expect to see when you're 3-2 up with just eight minutes remaining.

Righting their corner kick wrongs could be a quick-fire way for Puel to ensure his team doesn't slide down the table and will give them solid foundations for the 2018/19 season. It's clearly a personnel issue as opposed to being systematic meaning it's a lot easier to fix.