The Champions League final will not just be a clash between two of the most exciting collections of attacking talent in Europe. It will also be a demonstration of the shifts in attacking roles over the past few years of elite football.

A few years ago, false nines were starting to gain popularity and it looked as if forwards would undergo something of a ‘midfielder-fication' – developing a more well-rounded game to fit a wider set of responsibilities.

Roberto Firmino fits this to a tee, pressing the opposition and expending energy that could be spent attacking them with the ball at his feet. However, his role at Liverpool is more unique amongst Europe’s elite teams than it could have been.

If the ‘midfielder-fication’ trend had gone the way it sometimes seemed to be going, more forwards would have a persona radar similar to Firmino.

Yet in this, the biggest match of the club season, there will be three other elite strikers who play very different roles.

The four all represent very different versions of a ‘forward’.

Opposite ends of the spectrum

Cristiano Ronaldo and Firmino could not be further apart on the spectrum – one is an emblematic pure striker while the other is almost a midfielder, putting in defensive work across the pitch.

Meanwhile, Karim Benzema’s relationship with Ronaldo is similar to Firmino’s with Mohamed Salah. Both are nominally centre-forwards but play second fiddle in attacking terms to a team-mate, who racks up more shots and touches inside the box than them. 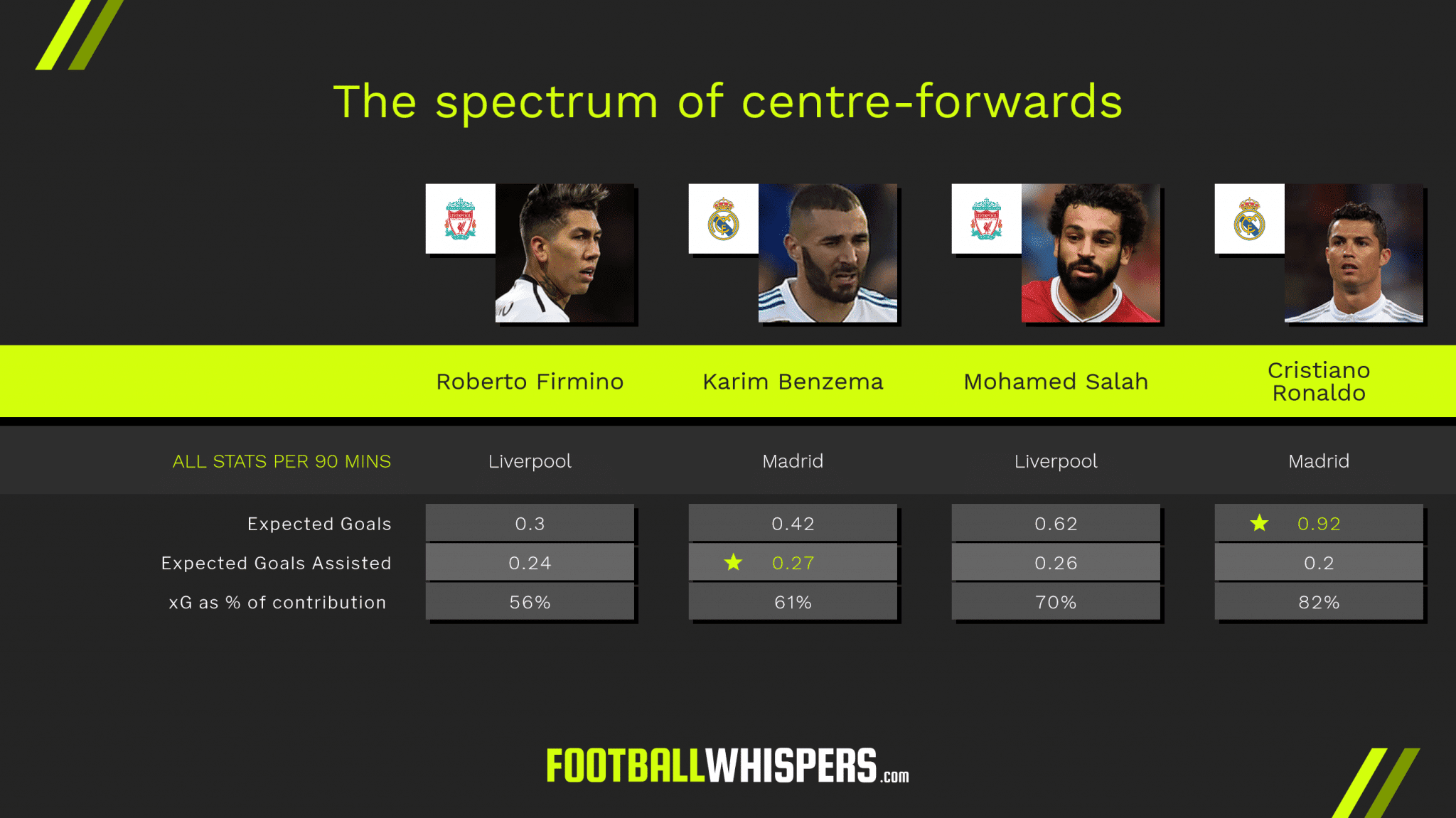 The share of Firmino’s expected goals contribution that comes from his own shots is 56 per cent For Benzema that is 61 per cent; it’s 70 per cent for Salah; and for the ever-selfless Ronaldo it is 82 per cent.

The chance creation that Benzema contributes puts him fifth in La Liga for xA90 (expected assists per 90 minutes). He is the most stereotypically pure-forward by far out of that top bunch, behind Lionel Messi, Ousmane Dembélé, Luis Suárez and Gareth Bale.

Defending from the front

However, unlike Firmino, his defensive contribution is limited. The Liverpool striker puts up 2.74 tackles and interceptions per 90, far ahead of the Benzema’s 0.95.

Still, this is more than either Salah or Ronaldo, who are only burdened with making 0.67 and 0.5 tackles and interceptions per 90 respectively.

In days gone by, it would be the main man, the central striker, who would be given a lighter defensive load while the rest of the team went about their duties. This is clearly not the rule anymore.

There has been a trend of the most threatening players of a team’s attack starting from wider positions, from which they can drive into space and find gaps between centre-backs and full-backs.

It’s not just Ronaldo and Salah who have taken on roles as their side’s biggest attacking talent in wider areas. Sadio Mané and Philippe Coutinho have previously played similar roles for Liverpool, while Eden Hazard and Lionel Messi are other particularly notable examples.

Could Liverpool spark a trend?

The variety in the upcoming Champions League final’s four main strikers highlight the diversity in ways that football teams can play. Also, and perhaps more interestingly, they pose questions about how trends might change in the future.

The ‘pure striker’ – a category which Benzema certainly fits into – was thought to be an endangered species a few seasons ago. To survive in this Real Madrid team, with Ronaldo moving more centrally as he gets older, the Frenchman has had to adapt and be satisfied in setting up chances to team-mates.

But survive he has done, and elsewhere ‘pure strikers’ are still in use. Romelu Lukaku at Manchester United, and Gonzalo Higuaín at Juventus are all the focal points of their teams’ attacks.

Even Pep Guardiola, the manager you’d put most money to fully embrace the idea of the ‘midfielder-fication’ of football, still plays with a recognised striker in either Sergio Agüero or Gabriel Jesus.

Trends often follow successful teams – see the spread of possession football after Spain and Barcelona’s success from 2008-2012 and the rise of the back three since Chelsea’s title win last season.

Liverpool are one of the few teams to play with a ‘modern’ approach to their forwards. If they win on Saturday, it might spark yet another one.