It truly has been an unforgettable few months for Aston Villa, who have transformed their season and are potentially just 90 minutes away from a return to the Premier League.

On March 11th, the Midlands club were eight points off the play-offs and had played two games more than most of the chasing pack. Yet, a club-record run of ten consecutive league wins over March and April ensured the Villans guaranteed themselves a spot in the top six, and a place in the play-offs for the second season in a row.

Much of Villa’s remarkable turnaround was down to star man Jack Grealish, who contributed four goals and two assists during the club’s surge up the table, while also turning provider for both goals in the play-off first-leg win against West Bromwich Albion, which helped set up a clash with Derby County in the final on Monday.

Yet, even the best players are nothing without a group of solid team-mates around them, and superb as Grealish may have been he is far from alone in guiding Villa to Wembley…

Just a few years ago, Mings was one of the most admired young centre-backs in the Championship, but several long-term injuries have stunted his development.

In January, the Bournemouth defender was sent on loan to Villa Park for the remainder of the season and has since become something of a fans’ favourite in the second city.

A cornerstone of Dean Smith’s plans, Mings’ ability to drive out of defence with the ball has revolutionised the team’s tactics in the second half of the campaign. 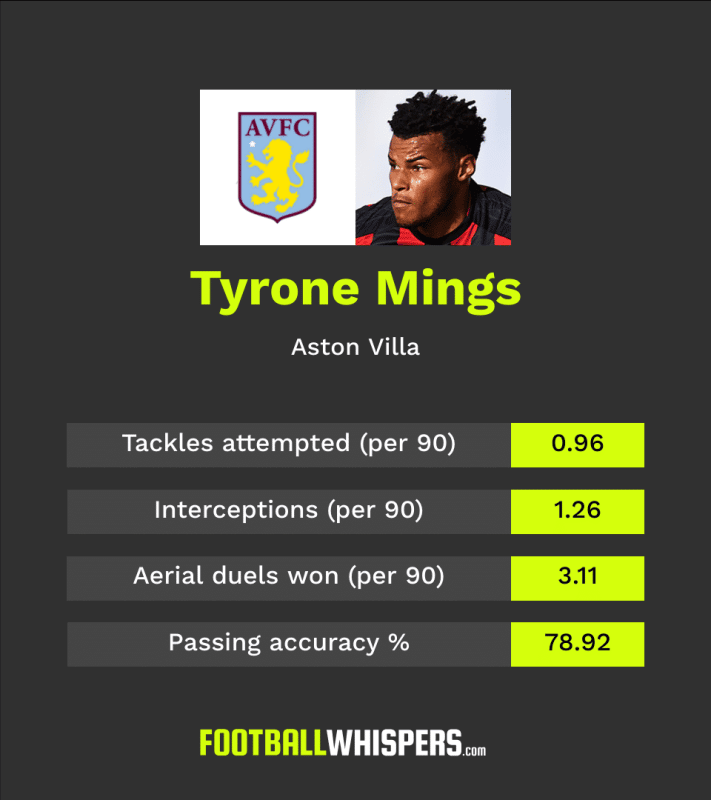 With an average of 52 passes per match, he has allowed Villa to retain possession more efficiently while, in turn, providing midfielders with the service to launch devastating attacks.

His defensive performances have also been exemplary. Of the nine games Mings played during Villa’s winning run, the claret and blues conceded just four goals and kept five clean sheets in that time.

Unsurprisingly the 26-year-old has been linked with a permanent move to Villa should they gain promotion – yet whether Eddie Howe will let such a talented player leave is another matter.

Signed for less than £3million last summer, the Scottish international has proved to be one of the bargains of the season.

McGinn has grabbed important goals for Villa in big moments: a brace when trailing to Nottingham Forest, the opener against Middlesbrough in March and the equaliser a few weeks later against Sheffield Wednesday – the side whom he netted a goal-of-the-season contender against earlier in the campaign.

It’s not just on the ball where the midfielder has stood out. A relentless runner, McGinn has earned plaudits from the Villa Park faithful for his cross-field sprints in the dying embers of games. In fact, his tireless work rate even led the club’s Twitter account to jokingly claim he ran the London Marathon mere hours before April’s trip to Elland Road.

Reportedly a transfer target for Brendan Rodgers – who tried signed the former Hibernian man last summer while Celtic manager – McGinn will likely be in the Premier League next season, regardless of Villa’s plight on Monday.

It’s one of nine goals he has bagged in all competitions this season, just short of the 11 he produced in 2017/18.

Despite that, Hourihane has at times been overlooked in place of the more defensively savvy Glenn Whelan, aligned alongside the undroppable Grealish and McGinn.

When selected, the former Barnsley skipper has often operated as a deep-lying playmaker, allowing his midfield partners to meander up the pitch. Yet during Grealish’s injury layoff, Hourihane was also tasked with filling the creative void created by the Villa no.10.

That’s something he is more than capable of, evidenced much by the impressive 12 league assists he has been credited with this campaign.

Hourihane is also a real threat from free-kicks, and even netted one against Villa’s opponents on Monday, Derby, in their trip to Pride Park last November.

Only Teemu Pukki scored more Championship goals than Tammy Abraham in the 2018/19 regular season and, having played six games fewer than the Norwich man, Abraham actually has a better goal-per-minute ratio.

Without the striker’s goals, Smith’s men would have been 14 points and 10 league places worse off.

Ahead of @AVFCOfficial v @dcfcofficial on Monday, we've picked a combined XI.

Who would make your team? pic.twitter.com/6RpWeGILTv

Abraham really does have everything needed to be a top Premier League striker in the years to come. Lighting-fast, skilful, razor-sharp reactions and, most importantly, an eye for goal.

The on-loan Chelsea man is also capable of scoring all types of goals, whether it’s a scruffy, poacher’s finish, a well-timed header, or penalties, as he demonstrated with such confidence against West Brom.

His highlights this year have include scoring home and away to Derby, netting against his former side, Bristol City, putting Villa 2-1 against Birmingham City and that remarkable four-goal contribution during the 5-5 draw with Nottingham Forest in November.