As Philippe Coutinho is finding out, the grass isn’t always greener. He’s not even been a Barcelona player for 18 months yet, if reports are to be believed, he’s looking for a move away from the Camp Nou.

In the eyes of some Liverpool fans, this is karma for how he acted before he was allowed to complete his dream move.

The Brazilian maestro reportedly faked injuries to force through a transfer away from Liverpool, and this after handing in a transfer request before the club’s important Champions League clash with Hoffenheim. His actions threatened to derail the season before it was even properly underway. And, as so many have rightly pointed out, no player is bigger than the club.

He burnt bridges and that chapter of his playing career was brought to an end.

But now that the dust has settled, should the Reds be in the conversation to bring him back to the Premier League?

Reports in Spain claim Manchester United and Chelsea are interested in the Barcelona No.7 but face competition from Paris Saint-Germain to pry the 26-year-old away from the La Liga leaders.

Barcelona are believed to be after £120million for their club-record buy as they look to fund another summer of lavish spending.

Initially, many believed Ousmane Dembélé would be sacrificed but the World Cup winner has impressed this season and there’s a clear role for him in Ernesto Valverde's team, despite his gaming exploits. 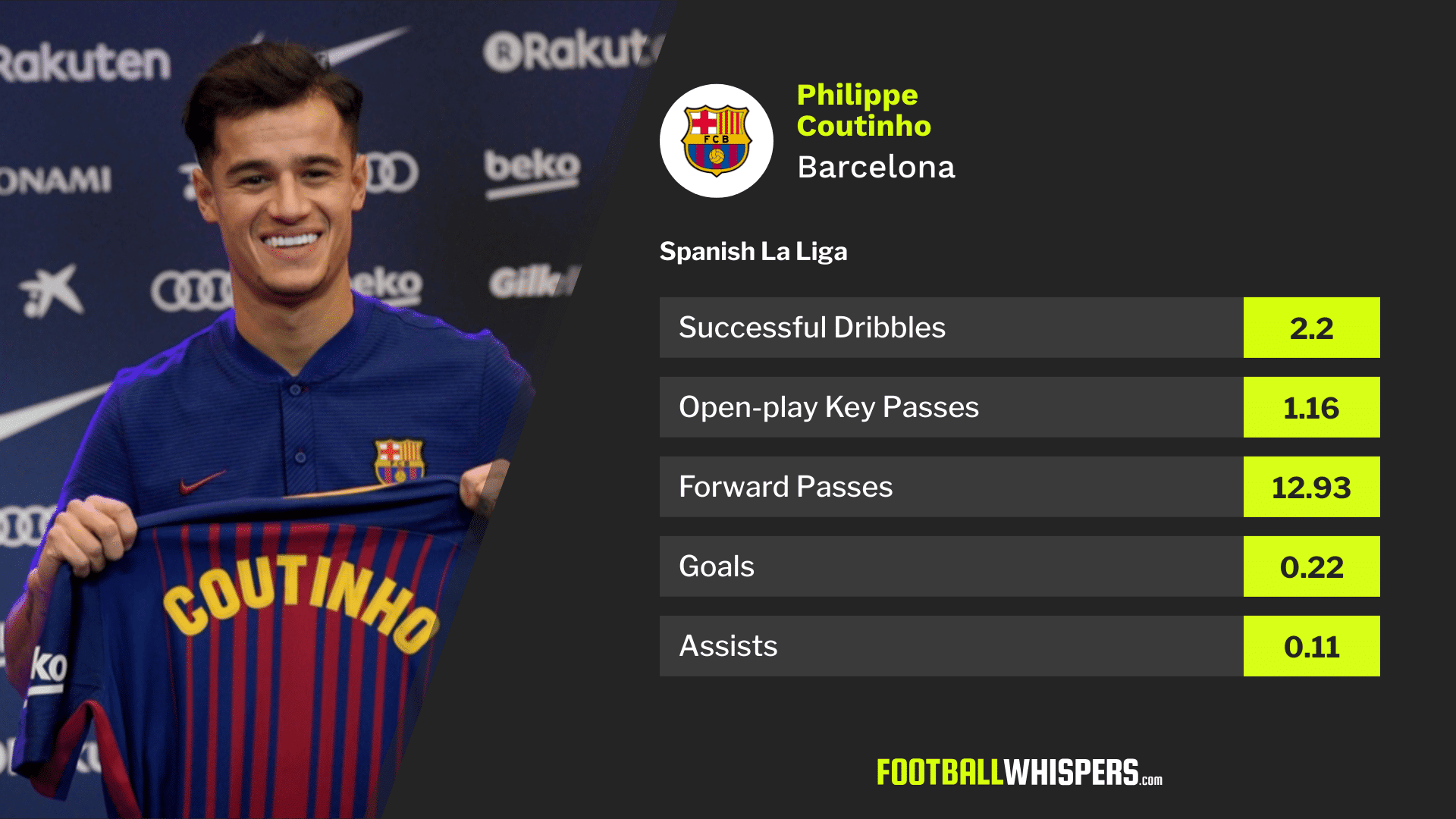 Coutinho, however, has failed to carve out a niche or find a position he can call his own. The general feeling is he hasn’t got the stamina to play the Andrés Iniesta role on the left of a midfield three, while as the man on the left of the front three he isn’t as explosive as a Dembele.

There’s also the Lionel Messi factor. For Liverpool, the Brazilian would pick the ball up on the left and drift inside to influence proceedings there. At Barcelona, he’d be getting in Messi’s way if he tried doing that.

He’s having to tweak his natural game and, in turn, it’s having an impact on his performances. For a player who is so unpredictable when in possession, he makes things a lot more predictable for this Barcelona team.

Simply put, the Coutinho Barcelona courted for so long isn’t the Coutinho fans are now witnessing on a weekly basis. But that doesn’t mean that version no longer exists, he just needs to be unleashed again.

The best platform for him may well be a return to Liverpool.

There’s no manager in world football who understands the Brazilian like Klopp does. It was under his tutelage that he matured from an inconsistent performer, capable of sublime moments, into a genuine world-class star. 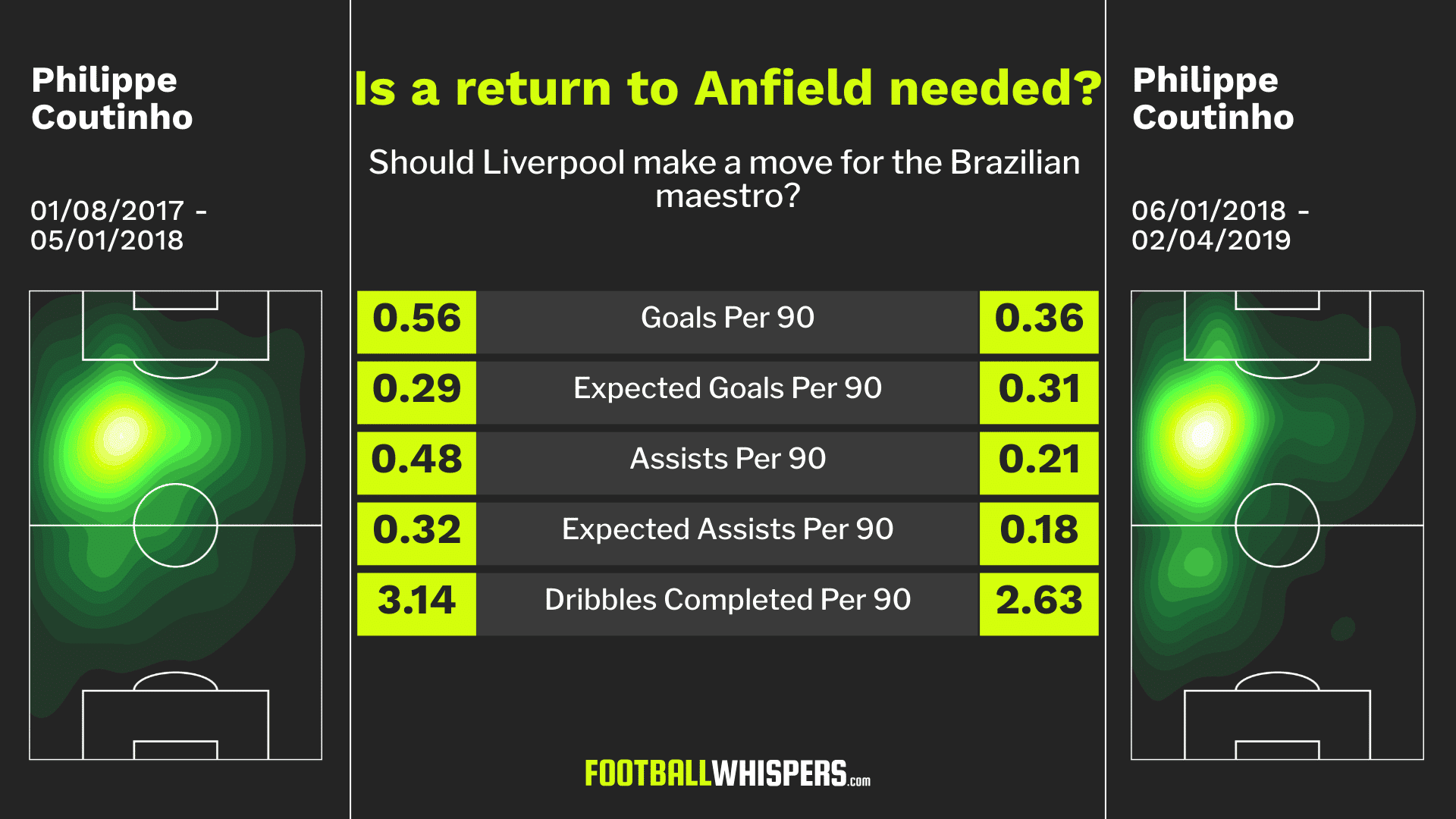 Coutinho’s availability comes at an ideal time for the Premier League leaders. Liverpool are in limbo in many ways. They still need a player of Coutinho’s ilk after missing out on Nabil Fekir last summer but very few exist and even fewer are within their budget.

They’ve stepped up in the transfer market under Klopp. No longer do the Reds have to buy potential. They’re now in for players who can make an impact immediately.

Coutinho would do just that. He knows the demands, he knows the players and he knows what is expected of him. There would be no need for a bedding in period.

And while fans still harbour resentment about how he left, a lot of that would be forgotten if he picked up where he left off. The same thing happened when he returned to the starting XI after missing the start of the 2017/18 campaign.

As soon as the goals started flying in, and Coutinho showed he was more ruthless than ever before, he was, to an extent, forgiven. He was in the form of his life prior to the move and arguably the best player in the Premier League. Why would you not want that on your side as opposed to against you?

Luis Suárez is still adored despite his plea to move to Arsenal before orchestrating a move to Barcelona the following summer. Fans still remember Fernando Torres fondly even though he forced a move to Chelsea on deadline day. Xabi Alonso and Javier Mascherano both pushed for transfers elsewhere but some fans even wanted them to return towards the end of their careers.

So why not Coutinho? He’s edging into the pomp of his career, there are very few players in the world who are better than him in his position and Barcelona still owe Liverpool a large part of his transfer fee.

If the player can convince Klopp that he wants to be part of the squad then it really is a no brainer. In the past, the German tactician has welcomed Nuri Sahin and Shinji Kagawa back after both players left. He was also reportedly eager to reunite with Mario Gotze, proving he isn’t one to hold a grudge.

Liverpool have proven they don't need Coutinho, but that doesn't mean they shouldn't bring him back.