There have been plenty of heroes of Leicester City‘s incredible season and all have had their story told. Except Harvey Barnes.

Jamie Vardy and James Maddison have been the poster boys of the Foxes' surprise push for Champions League football. Ricardo Pereira and Ben Chilwell.

On Saturday, the 22-year-old ensured he couldn't be overlooked any longer. By scoring City's first in the 2-2 draw with Chelsea, Barnes netted in his third consecutive Premier League game. Before bagging in the 4-1 rout of West Ham United, he'd never scored in consecutive matches before.

It's a remarkable rise for someone who was sent out on loan to West Bromwich Albion at the start of the 2018/19 campaign. But it's indicative of the transformative effect Brendan Rodgers has had on everyone at the King Power Stadium in little under a year at the helm.

It was, however, Rodgers' predecessor Claude Puel who recalled Barnes from his fruitful loan spell with the Baggies on January 11 last year. The Frenchman felt the young winger could add something which had been missing from his misfiring side.

Immediately thrust into the side, Barnes' electric pace and ability to beat a man brought a new dimension to Puel's staid Leicester side. It was not enough to save the former Lyon coach from the sack, but Barnes helped kickstart the Foxes' season.

He scored his first goal in the 2-2 draw at West Ham in late April and finished the season as an England Under-21 international with a new five-year deal under his belt.

After beating out fellow youngster Demarai Gray for a starting spot in Rodgers' new-look City side, Barnes scored on the second weekend of the season as Leicester won 2-1 at new-boys Sheffield United. 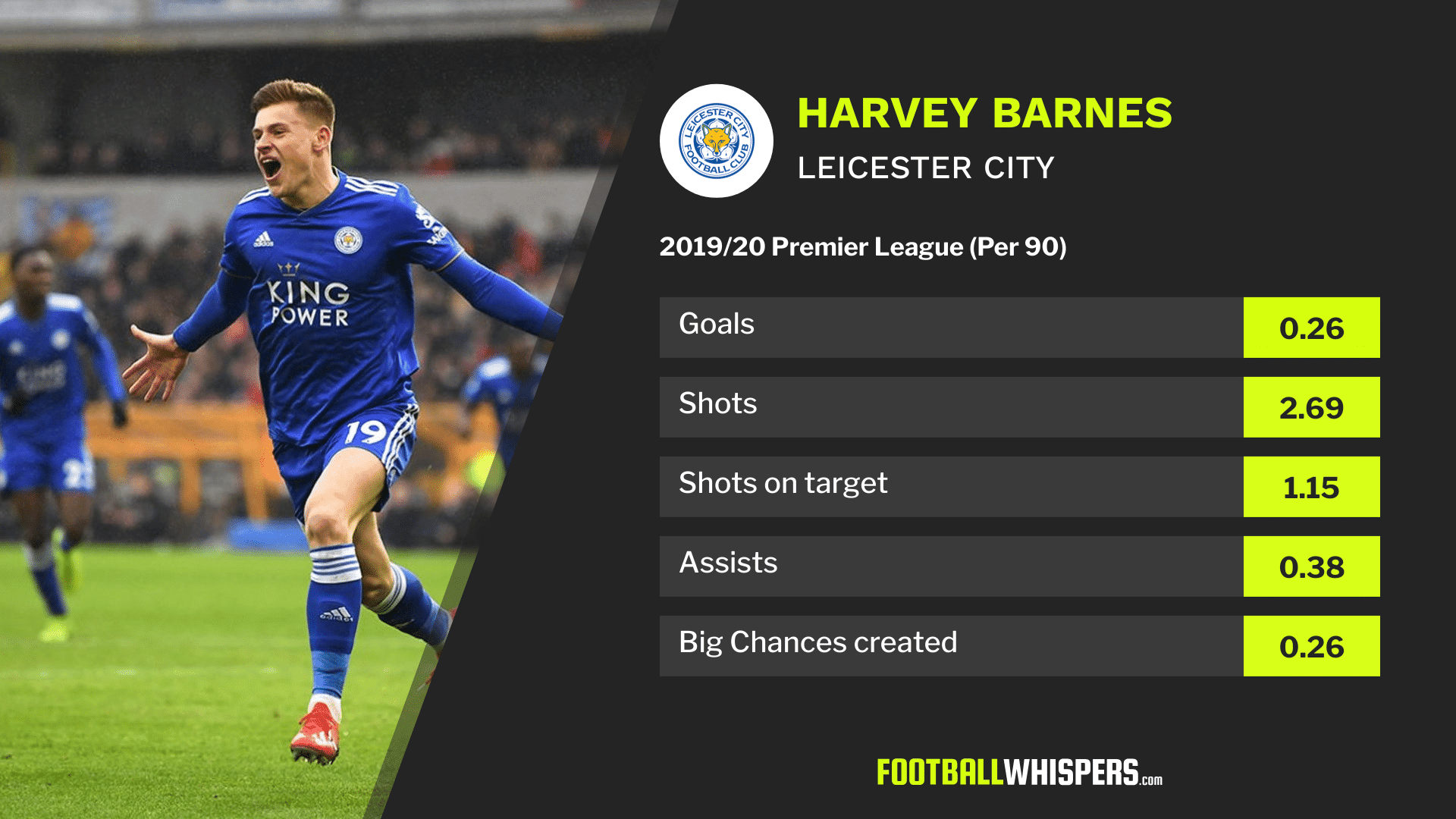 But he didn't find the back of the net again until the FA Cup third round, scoring the second in a 2-0 win over Championship side Wigan Athletic. That goal, though, has sparked a run of four in six in all competitions.

Always a menace with the ball at his feet – Barnes completes 1.85 dribbles of the 3.52 he attempts per 90 –  he has added an end product to his game which had previously been missing.

His father, former York City, Burnley and Doncaster Rovers forward Paul Barnes, knew a thing or two about finding the back of the net and notched 206 times in 578 career appearances.

But Barnes Jnr. says he has actually been following the lead of Foxes team-mate Vardy.

“One hundred per cent, there is a lot to learn from [Vardy],” Barnes said. “You look at the form he has been in, his finishing throughout the season has been spot on.”

He continued: “I don’t think there is one thing to put [my good form] down to. For me it is just getting into more dangerous positions. When chances have come my way I have been more clinical. It is important.

“I have been working on it all season. It wasn’t quite happening for me in games. Obviously the last few games they have started to go in.”

Getting in the right areas has never been a problem for Barnes. With 2.69 shots (per 90) this season, the youngster ranks sixth among Premier League midfielders. Of those, 1.15 (per 90) have been on target, putting him third among his peers.

But that only counts for so much. And Barnes has been underperforming. So why has he suddenly hit such a rich vein of form in front of goal?

Looking at his xG data, we can begin to formulate an answer. In the first 19 Premier League games of the season, Barnes' efforts were worth 0.3 goals (per 90). In the four league fixtures since the turn of the year, that figure has more than doubled to 0.62. 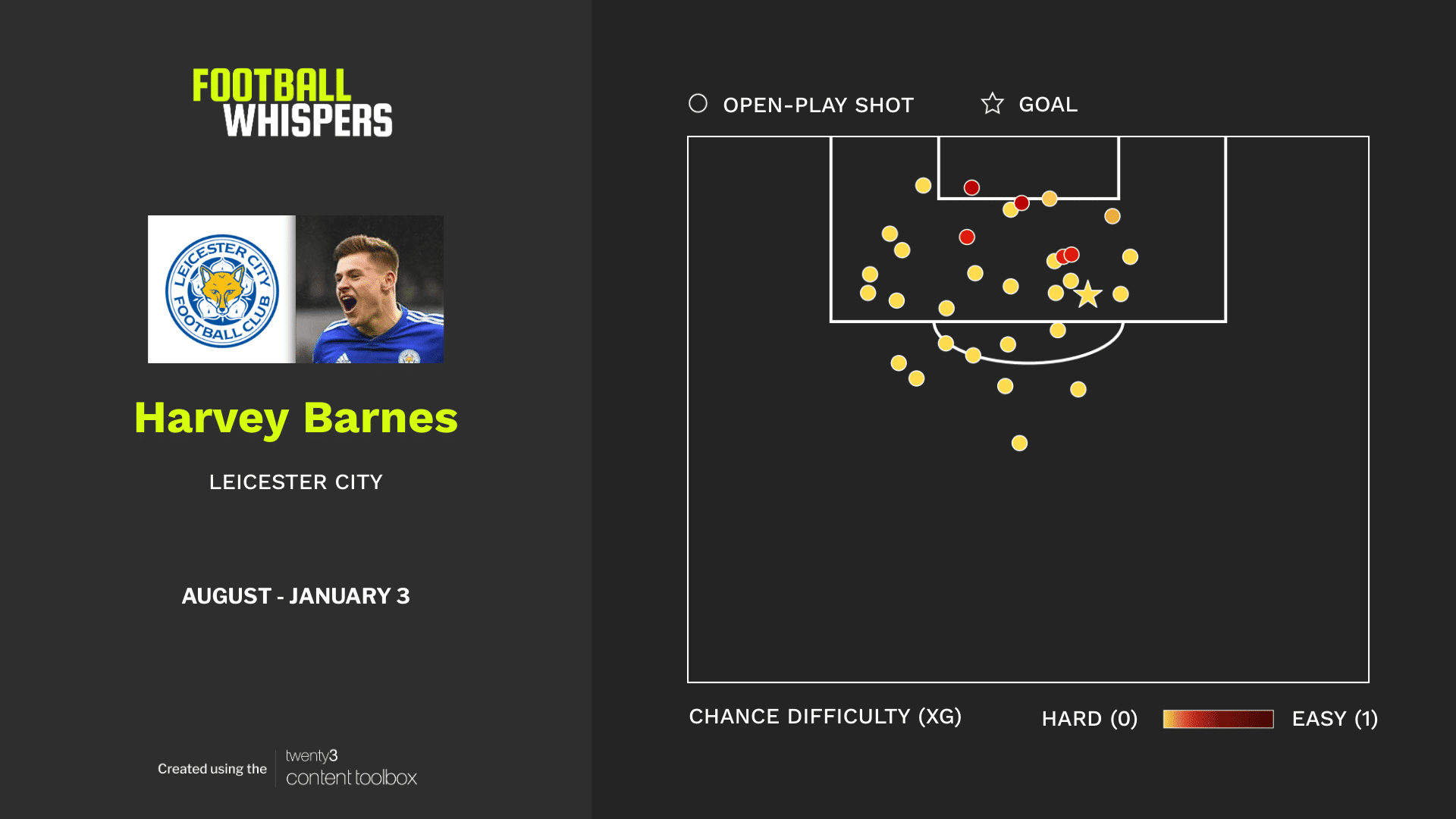 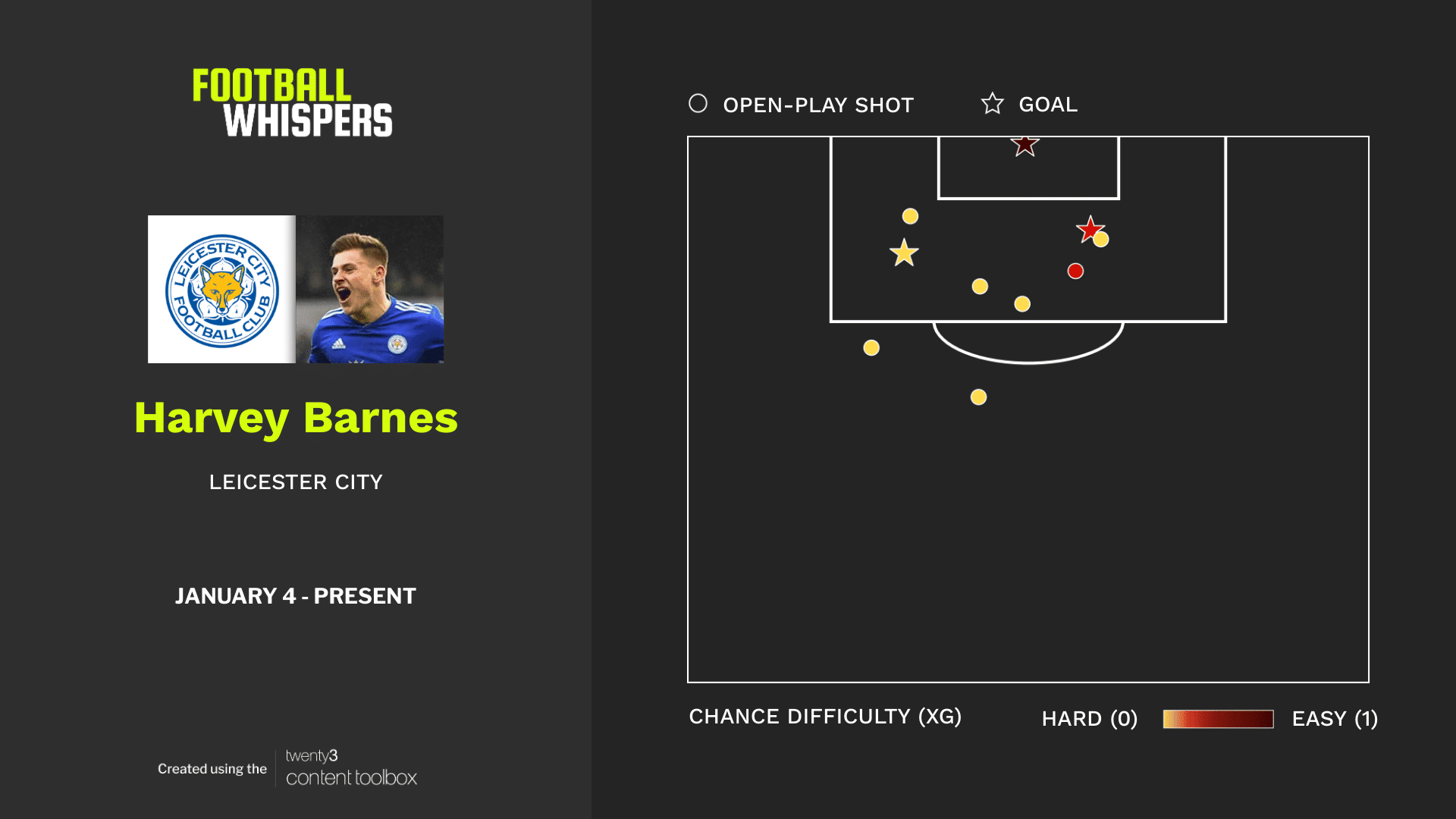 In the graphics above we can see the difference in where Barnes is taking his shots from for those two periods. It is subtle, but Barnes is shooting from more central areas than previously when he had been taking a higher volume of efforts from the left-hand side of the penalty area.

There's more to Barnes' game than goals, though. He is also a provider. With six Premier League assists, at a rate of 0.38 per 90, he ranks third among Premier League midfielders. That is actually an over-performance against an xA90 score of 0.25.

The natural question is whether he can force his way into England contention – something Maddison has struggled to do. With Raheem Sterling, Jadon Sancho and Marcus Rashford for company in the wide areas, he will have his work cut out forcing his way into Gareth Southgate's plans.

But if the glowing tribute Rodgers paid Barnes is anything to go by, a senior England call-up is not out of the question.

“He does finishing exercises — left foot and right foot — and analysis videos but the key with him is he wants to improve,” Rodgers told The Athletic. “He asks questions. ‘How can I be better? How can I improve?’, then he does it.

“This is an education for the players. You have to look at your game if you want to be a top-class professional at the elite end. It is a constant evolution of his talent. That is what we are seeing now with him.”