With a four-goal haul against Watford in March, Mohamed Salah took his tally for the season to 36 goals from just 40 games in all competitions, streaking ahead of Harry Kane in the race for the Premier League's golden boot with 28 strikes in the English top flight – his return has since reached 31.

The Egyptian attacker has been crowned Player of the Year, while his stunning goal-scoring form has him on track to become the first player to hit 35 league goals in England's top tier for half a century.

The most flattering praise lavished on Salah of late, however, are the comparisons being drawn between the Liverpool No.11 and Barcelona superstar Lionel Messi.

These juxtapositions are rooted in a degree of logic: both men score and assist a lot of goals, are left-footed with a low centre of gravity and possess a kind of scurrying dribbling style.

But there are far more differences than similarities between Salah and Messi. The Argentine attacker, for example, is far more involved in his side's general play, averaging 53.75 attempted passes per 90 minutes this season, often dropping deep and roaming in search of the ball. Salah attempts just 30.31 passes per 90.

Messi's superiority as a creator from deeper zones is evidenced by his average of 20.47 forward passes per 90 to Salah's 6.16, and 0.54 accurate through-balls to the Liverpool man's 0.15.

For the most part the similarities between Salah and Messi are aesthetic, more concerned with how they do things, rather than what they do on the pitch and what they attempt to achieve for their teams on a weekly basis.

When looking what Salah actually does – rather than how he does it – analysing what he aims to accomplish and what he adds tactically, Messi's great nemesis, Cristiano Ronaldo, appears a much more suitable player for comparison with Egypt international.

His main role in Jürgen Klopp's side has evolved slightly as the season has worn on, informed by his form in front if goal. His primary use, though, as it was when he moved to Anfield and has since been further emphasised, is finding scoring chances – like Ronaldo at Real Madrid.

Salah takes more shots than any Liverpool player (4.44 per 90 – almost twice as many as central striker Roberto Firmino). His expected goals per 90 (xG90) average of 0.65 accounts for 34.21 per cent of Liverpool overall xG – Messi accounts for just 26.05 per cent of Barcelona's xG, whereas Ronaldo is up at 44.04 per cent of Real Madrid's.

Looking at how each player's expected assists per 90 (xA90) averages contribute to their team's overall chance value is even more instructive. The expected assists model measures the xG of the subsequent shot a pass leads to, meaning a value can be placed on the quality of chance a player creates.

Messi has an xA90 of 0.28. And although Salah's nine league assists this season is closer to the Argentine's 12 than Ronaldo's five, his xA90 of 0.18 is much nearer to the Portuguese's 0.15, broadly evidencing a similar creative impact.

Therefore the chances Messi is creating this season account for 13.02 per cent of Barça's overall xG, whereas Salah's creative contribution for Liverpool (9.47 per cent) is again closer to Ronaldo's for Los Blancos (6.88 per cent).

To take the Salah-Ronaldo comparison a step further, both players are at their best when working in short, sharp bursts, operating at elite levels instinctively, and incredibly decisive contributors inside the penalty area.

Salah's great strength is his ability to wreak havoc in the opposition's defence with how quickly he forces opponents to make decisions and take actions when he attacks them. To a certain extent, he is at his most lethal within two or three seconds of receiving the ball, with returns diminishing incrementally thereafter.

This isn't to suggest he lacks game intelligence in any way, but rather he possesses a unique brand of footballing intellect, reading situations and finding solutions at such a high clip that defenders can't live with him when forced to act at similar speed.

A comparable trait manifests itself in Ronaldo's game in his positioning and intelligent movement – it's no coincidence the former Manchester United forward consistently finds himself in the perfect position to finish simply. And while, at 33, he may no longer be able to dribble beyond multiple markers over great distances, he is a match for any defender over ten yards – he knows where he needs to be and can get there quicker than almost anyone.

Both Ronaldo and Salah are chance-getters of the highest order, and likewise their ability to find scoring opportunities is actually aided, rather than hindered, by their wide starting position.

Over the last 18 months Ronaldo has regularly occupied a more conventional centre-forward's role – the creative side of his game further de-emphasised and his goal-getting traits focused on as he ages. In this regard, Salah is most akin to the version of the Portuguese attacker we saw three or four seasons ago.

Still, though, Ronaldo has often found himself starting from the left side of Madrid's attack this term, while Salah is the right-sided man in Liverpool's trident. However, neither can really be considered a winger. With an intelligent and unselfish striker playing inside of them – Firmino for the Reds and Karim Benzema for Real – both wide attackers pivot off these facilitators, usually found in central zones, in advance of the striker.

This makes them far more difficult to pick up, able to ghost into scoring positions at the far post when the ball is progressed down the opposite flank. Indeed, 18 of Salah's 31 league goals this season have been scored from the right side of the penalty area and within 12 yards of goal. 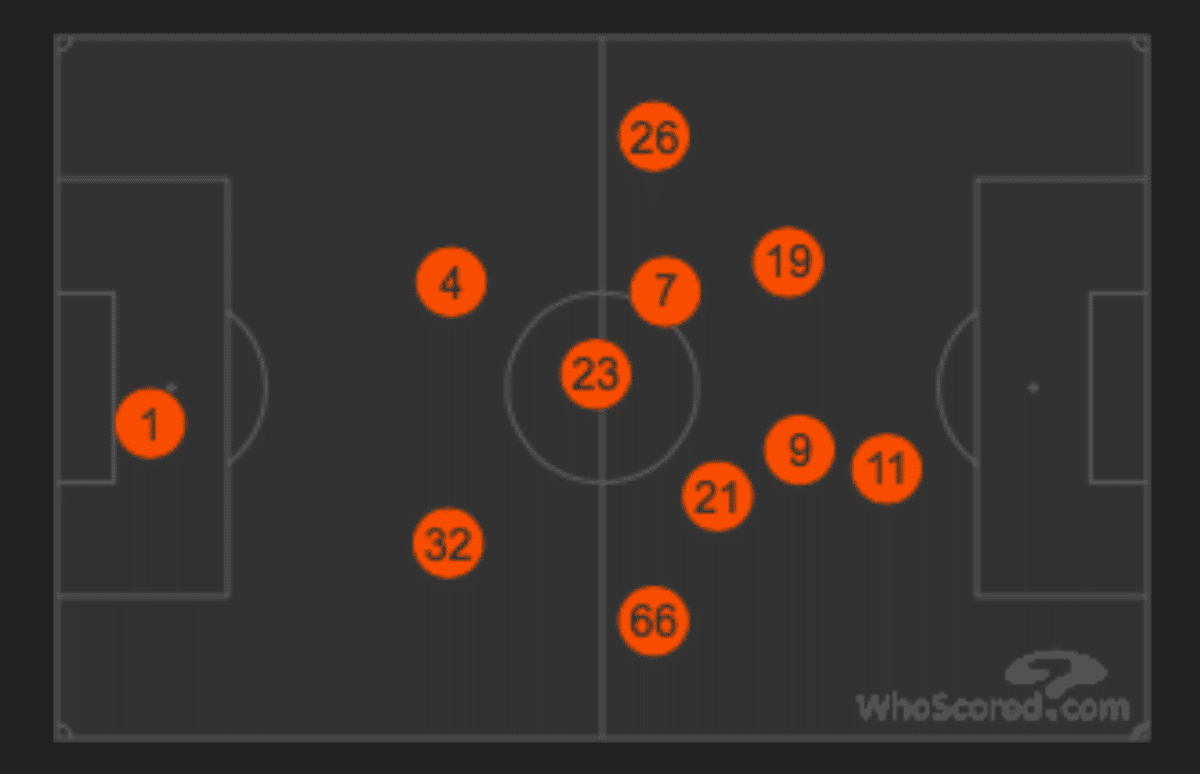 The above average-position map, courtesy of West Ham United at Anfield. In that game the Reds lined up in their typical 4-3-3 formation, but we see Salah (No.11) is the most advanced player and relatively central, ahead even of striker Firmino (No.9). 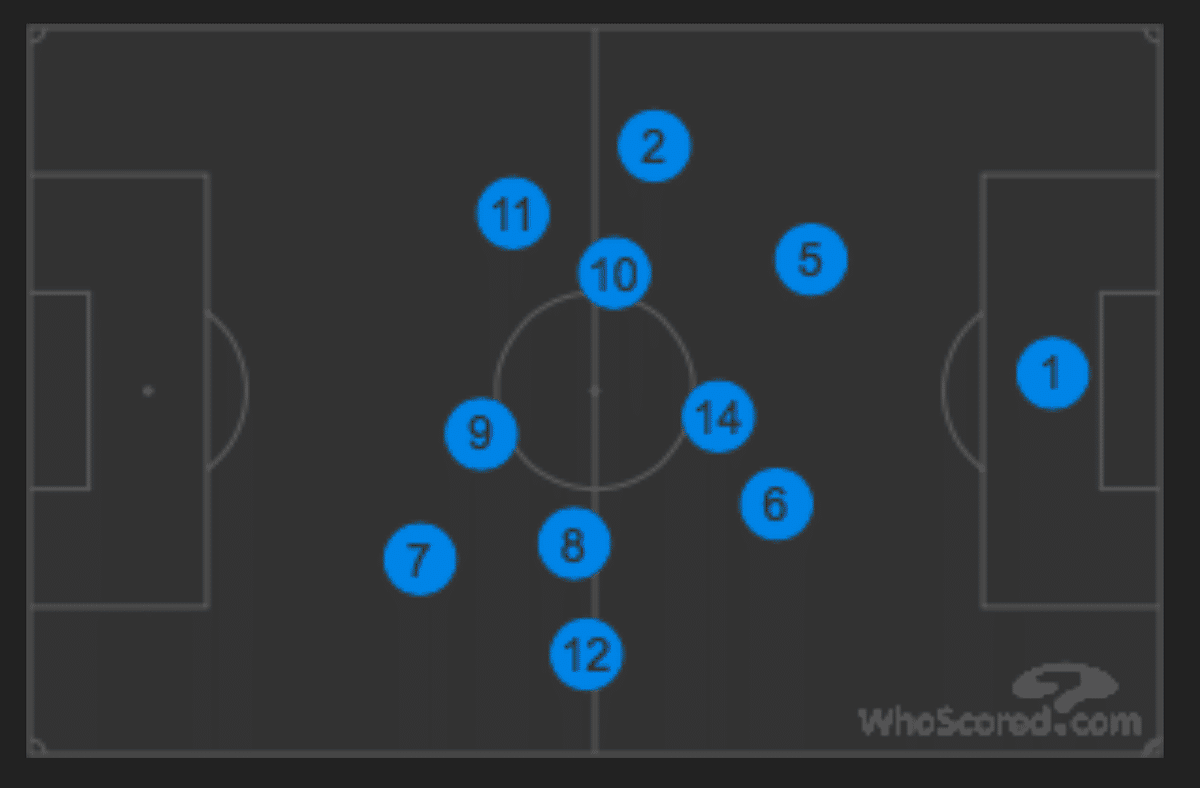 This time we see the average-position map for Real Madrid's victory over Valencia at the Mestalla this season. Zinedine Zidane set his side out in a 4-3-3 shape, but, like Salah, we can see Ronaldo (No.7) is the most advanced player, higher up than Benzema (No.9).

In fact, the balance of Liverpool‘s front three is very much reminiscent of Madrid's ‘BBC' trio at their peak, only mirrored, with left becoming right and vice-versa.

On one side, there is the ruthless goalscorer, concerned first and foremost with getting into dangerous positions and enjoying a high volume of chances, coming in from the flank on to their stronger foot – Salah and Ronaldo.

In the middle there's the selfless facilitator; a highly intelligent and technically excellent centre-forward whose vertical movement helps inform the runs those around them are able to make.

Although regular scorers themselves, they are primarily a conduit to the goal-getters – Firmino and Benzema occupy this role. And on the opposite flank, there's the fast, direct inverted winger, who links well with colleagues, is able to progress the ball over distance with their pace and dribbling ability and is a goal threat from range – Sadio Mané and Gareth Bale.

It would be wrong to suggest Salah is yet on the level of either five-time Ballon d'Or winner, with plenty for the Egyptian forward left to prove beyond the current season. But in terms of his role within the Liverpool attack and the situations in which he is most effective, don't let appearances fool you, he's much more Ronaldo than Messi.