After West Ham United published their accounts for the 2016/17 Premier League season – the highlight of which was the £43million profit the Irons recorded – joint-chairman David Sullivan made all the right noises.

He spoke about how the club is in its healthiest financial position for several years. He reflected on West Ham breaking their transfer record in each of the last two seasons. And he added further investment will be made this summer.

There was also, somewhat surprisingly, admittance. “I know some of our supporters will argue we have not spent enough in the transfer windows and signed the right targets – I accept that,” he said.

“We are changing the structure of our scouting and recruitment set-up and will make every effort to improve our performance in those areas in the future.”

Again it's all what fans want to hear, but don't expect Hammers supporters to buy it. They've become disillusioned with the hierarchy and there will be a march held prior to the game against Burnley in opposition of Sullivan, David Gold and Karen Brady.

One of the biggest criticisms levelled against the trio is the lack of strategy, both on the field and off.  It's the former we're focusing on.

In January £10million was spent on Preston North End striker Jordan Hugill, before 36-year-old Patrice Evra was handed a short-term deal in February worth a reported £75,000-a-week.

All those signings, in addition to what was already at the club, have helped West Ham to 14th in the Premier League table, just three points above the relegation zone.

The Hammers' squad also, according to Transfermarkt, is the second oldest in the top flight, with an average age of 28 years old. Only West Bromwich Albion's squad is older at 29 years old. Has money really been well spent?

The answer is no. It's why a shift in the transfer market is required. Instead of luring fading stars to the London Stadium on big contracts, a la Hart, Zabaleta and Evra, the Irons should be focused on young, talented players who can be developed.

And we've picked out five the Hammers should be interested in this summer, on the proviso they remain in the Premier League.

With Andy Carroll constantly injured and Hernandez's form indifferent, David Moyes has often played Arnautović up front this season. It's an experiment that has had mixed results, but one that shouldn't be continued beyond this season.

Angers striker Ekambi could be the perfect frontman for the Irons. In a side struggling for survival, he has 14 goals in Ligue 1 and four assists. It's an impressive return.

The 25-year-old played out wide last season but has relished being the club's focal point through the middle; he couples pace and strength with technique and intelligent movement.

In the French top tier this term, the Cameroon international has averaged 3.12 scoring attempts per 90, 2.08 successful dribbles and has an xA90 (expected goals assisted per 90) of 0.17.

There was interest from Brighton and Hove Albion in Ekambi in January and Angers turned down a £12million bid.

However, their operating budget is only £28million a season, so an offer north of £20million would likely be accepted. And for a player of Ekambi's talent and potential, that could prove an astute signing.

While West Ham haven't struggled for goals this term – they've netted 36, more than any other team in the bottom half – they've often been reliant on Manuel Lanzini to create chances.

The Argentine has played more open play key passes (1.11) than any other Hammers player, but he has also missed eleven games this season through injury. He needs a capable back-up or an on-field lieutenant to take on some the burden.

It's why the Hammers should consider a move for Benfica's Živković, who has been scouted previously by the likes of Arsenal, Manchester United and Ajax.

The 21-year-old, who has played on both flanks, as a number 10 and more recently as an central midfielder, would be a smart investment for the Irons.

Already a Serbian international, he has similar traits with the ball to Lanzini but is more effective without it.

This term in the Portuguese top tier, a division which is admittedly weaker than the Premier League, Živković has averaged 1.75 key passes per 90 and completes 3.63 dribbles per 90, but he has made 2.62 tackles per 90 compared to Lanzini's 0.82.

Živković also has three goals and five assists to his name this term despite playing a variety of positions. Most recently he's been used in a similar role to that of Kevin De Bruyne at Manchester City; a central midfielder but one who pushes forward and dictates attacks.

It's a position he's taken to well and one he could play at the London Stadium, but only if the Irons beat bigger clubs to his signature.

The Irons were linked with a loan move for the Lille midfielder on deadline day in January, however, they were unable to beat the clock and get a deal over the line.

But West Ham should return for Amadou in the summer, especially if Lille are relegated from the top flight, and they currently sit 19th in the table.

The 24-year-old, who was also a Crystal Palace transfer target in January, has impressed in a struggling side this term.

When playing in defensive midfield Amadou (No.6 in the below graphic) often drops back into the Lille defence when his side are in possession, which allows the full-backs to push forward and supplement the attack. 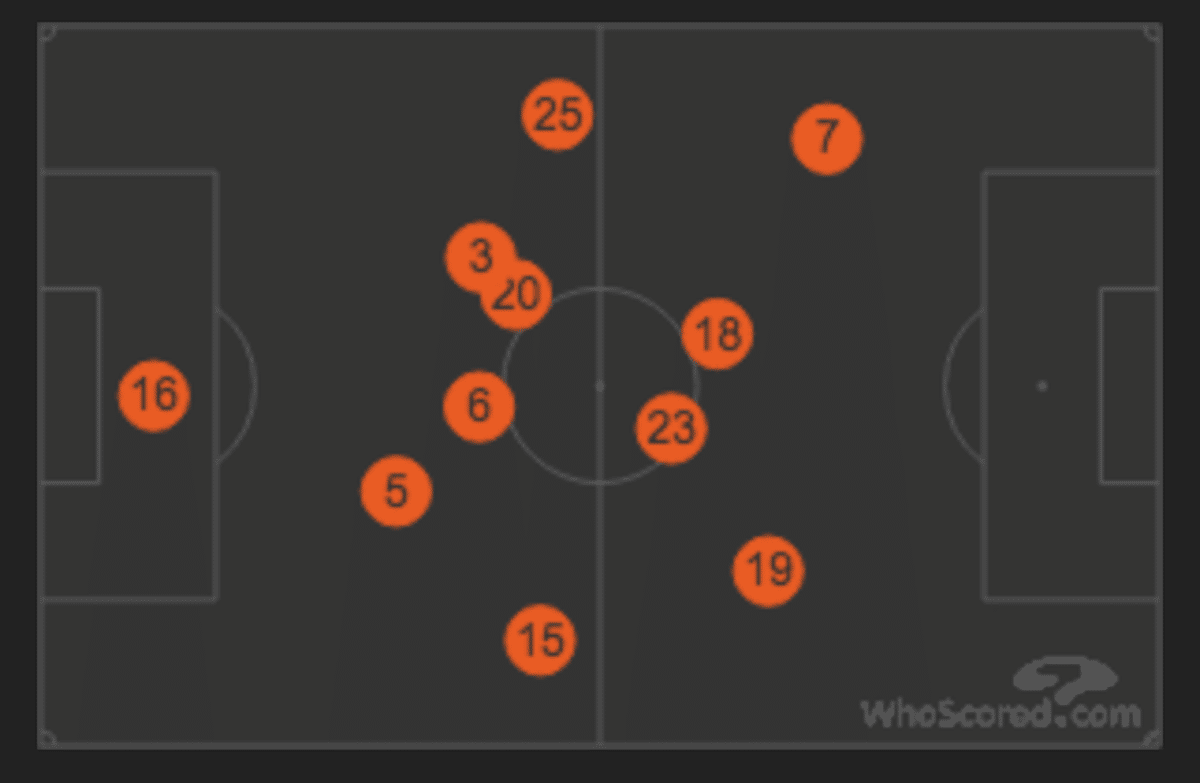 Cheikhou Kouyaté has performed a similar role for the Hammers in the past and like the Senegal international, Amadou can also be used in a back four when required, as he has turned this term.

Unsurprisingly given Lille failings, Amadou, who is club captain, has been defensively busy. He is making 1.82 tackles per 90, 1,78 interceptions and is winning 1.30 aerial battles.

If Lille go down they will have to sell several of their key players. It may not be a complete fire sale but the Irons could pick up Amadou for a bargain price given his ability and potential.

The talented Belgian was another name on the Hammers' January wish list but, like Amadou, the club left it too late to get a deal over the line.

Dendoncker's €20million price tag was one the Hammers could meet with little fuss, and the midfielder was keen on a move to East London.

However, after his current club, Anderlecht, sold captain Sofiane Hanni to Spartak Moscow, there was little chance of a deal being struck.

“West Ham seem an attractive club for me to take the next step in my career,” Dendoncker said last month. “A lot of people have given me advice, but I am clear in my mind. I want to make a step up.”

If they are not already, West Ham should be in talks to sign Dendoncker when the transfer window reopens. He is one of Europe's brightest young players and could become a star at the London Stadium.

Last season Dendoncker played as a deep-lying midfielder. From there he could dictate the game, using his excellent passing range to stretch opposition defences.

This term he's been dropped even further back and is utilised as a ball-playing centre-back, yet he continues to impress.

Despite being at the heart of Anderlecht's backline, Dendoncker is still playing 0.39 key passes per 90 and is averaging more scoring attempts per 90 than last term at 0.91.

It's why if he was to move to the London Stadium, Dendoncker should play in midfield. His attacking instincts, vision and ability on the ball make him ideal for a deep-lying midfield role.

It's a position he would thrive in and, potentially, he could become one of the league's best.

Ljajic is a name that ardent Premier League fans may remember. Back in 2009 Manchester United announced they'd agreed a deal to sign the attacking midfielder and his team-mate Zoran Tošić.

Unfortunately for the pair, who travelled to Manchester on several occasions to train with the first team, they were unable to secure work permits and their respective moves collapsed.

For many a talented youngster it would be a set-back they never recover from, and even though Ljajic was said to be in “psychological shock” he has gone on to enjoy a successful career in Italy's top flight.

Now at Torino in Serie A, Ljajic has impressed in a No.10 role for the club, that was until former Watford boss Walter Mazzarri was appointed manager in January.

Prior to the dour Italian's arrival in Turin, Ljajic had struck three goals and assisted five more in 15 games this season. And last term the Serbian netted 12 times and registered 11 assists.

But he has played just 20 minutes for the club in 2018 and could be sold in the summer for a knockdown price of €20million.

The oldest player on our list at 26 years old, West Ham wouldn't get as many years out of Ljajic as others, but he could be a shrewd addition and another foil for Lanzini.