It's no secret Chelsea wanted to sign a new centre-back this summer – and one from Italy if possible.

The Blues' pursuit of Juventus' Daniele Rugani was well publicised. A move for Mattia Caldara was also reported. However, the former couldn't be prised away from the Old Lady while the latter ended up moving from Turin to Milan for a fee of around €35million.

And so Chelsea, and new coach Maurizio Sarri, were left with what they had in central defence: David Luiz, Antonio Rüdiger, Andreas Christensen, Gary Cahill, Ethan Ampadu and, if required, César Azpilicueta.

It's hardly a dearth of talent. All six are full internationals and, barring 17-year-old Ampadu, have at least a season of Premier League football under their belts. Yet stories continue to eminent from Italy claiming Chelsea remain keen on signing a new central defender.

The latest name linked with a move to Stamford Bridge is Milan's Alessio Romagnoli. The Blues have been here before, two years ago in fact; Antonio Conte wanted the young defender to join him in West London but the club were unwilling to pay Milan's asking price.

The 23-year-old is a fine progressive defender, undoubtedly one of the most talented in his age group across Europe. Last season he featured for Milan in a back three and then, when Gennaro Gattuso took charge at the end of November, in a back four.

In the latter position he was more comfortable, and it allowed him to display his full range with the ball. His average of 51.89 accurate passes per 90 was the 13th highest of any Serie A defender, while only six could better his 0.32 open-play key passes per 90.

There is no doubting Romagnoli's talent but, crucially, is he any better than Christensen, who is a year younger and already up to speed with life in the Premier League?

After returning from two years on loan at Borussia Mönchengladbach, the Dane established himself in the Blues defence last season.

He was utilised in the heart of Conte's back three and his intelligence and bravery with the ball, coupled with his constantly improving positional awareness, was a bright spot in a largely disappointing season for Chelsea.

Under their former head coach, the Blues were a team who defended in numbers and attempted to counter at speed. Yet given their status as one of the division's biggest clubs, not to mention being Premier League champions, sides often sat back and let Chelsea have the ball.

It was then on Conte's side to maintain possession and break opponents down. Christensen had an important role in helping the Blues do so.

He was the starting point when Chelsea built from the back. Often the Denmark international would receive possession while under pressure and be charged with breaking an opposing side's press through intelligent passing.

It's a role that takes great courage and impressively he averaged 54.78 accurate passes per 90 last season in the Premier League, the fourteenth-highest total among the division's centre-backs.

Azpilicueta (64.7) and Rüdiger (58.9) did complete more accurate passes per 90 but given their positions on sides of the defensive three, that's to be expected as they link up more with the wing-backs and have greater licence to move into advanced positions.

Christensen was the lynchpin. And although errors crept into his game towards the end of last season, the most high-profile of which came in the Champions League to Barcelona, his first full campaign was considered a huge success. 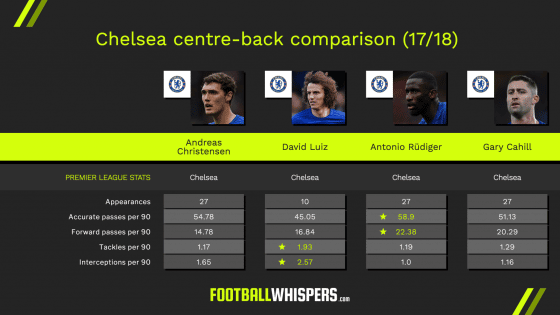 So when Sarri took charge at Chelsea this summer, it was expected the 23-year-old would become a crucial member of the starting XI. After all, a centre-back who is at ease in possession should be ideal for ‘Sarri-ball'.

And yet he hasn't yet featured under the Italian. Luiz and Rüdiger have started the season as the two central defenders in a back four and, given the Blues have won each of their four top flight games, the duo are unlikely to be dislodged any time soon.

The impact of Sarri's style is evident in the numbers as well as to the naked eye. Rüdiger is this season averaging 77.0 accurate passes per 90, while Luiz is registering 79.25, of which 27.75 are forward, the second-highest total in the Premier League among defenders.

Luiz's skill with the ball is not in question; few defenders have the same range of passing and vision as the floppy-haired Brazilian. Yet there is a backlog of evidence that suggests the 31 year old isn't suited to a back four – the latest example of which came in the win at Newcastle United.

He isn't going to change, it's too late in his career to do so. And with Gary Cahill in his thirties it is perhaps natural for Chelsea to turn their attention to the transfer market.

But bringing in another defender of the same profile and age will only hurt Christensen's, and to a lesser extent Ampadu's, development.

So forget Romagnoli. Forget Caldara. For now Chelsea should support what they've got, because what they've got is a special talent, one who is perfect for Sarri's system.