Ross County are the big boys in their group, which means they're there to be shot at. Can Forfar Athletic spring a surprise? Find out with our Forfar Athletic vs Ross County match preview with free tips, predictions and odds mentioned along the way.

An easy day at the office

Ross County kick started their new campaign last weekend. The result? A comfortable 5-0 win against Elgin
City. That win was their fourth consecutive win. They're favourites to win this group and everything suggests they'll get off to a pretty straight forward start; Forfar Athletic have been on an abysmal run of form lately. They have lost seven of their last ten games in all competitions winning just two. All things considered, this should be an easy win for Ross County and anything less will not be tolerated by the visitors fans.

Our second prediction is on the over/under goals market as we tip for over 2.5. Ross County have been consistent where finding the net is concerned; they've scored in all of their last seven games with nine goals netted in their last three. It's not just the fact they're scoring goals though that makes this prediction a simple one; six of their last seven games have seen at least three goals. Similarly, Forfar Athletic have seen some high-scoring games too with their last four games all exceeding the 2.5 mark.

We already made the prediction that Ross County win the game and we'll go as far as to say they'll be leading at half-time too. The reason for this is is because confidence in the camp is sky high. They're scoring goals, they're winning games and, the more important stat, they've been leading three of their last five at the interval. By contrast, Forfar Athletic's morale is on the floor; seven defeats in 10 with a, by comparison, big hitter coming to win. An early goal for Ross County would kill any chance of an upset.

An easy day at the office for Ross County

Forfar Athletic got relegated to the League Two last season due to a string of poor results. They will obviously hope for a positive start to their new campaign as they take on Ross County but hope might be all they can do. Ross County arrive in this game off the back of four wins in a row and they will be expecting to make that five here. Oli Shaw is their main man at the top of the pitch and the Forfar Athletic backline will need to be on their game to keep him quiet. 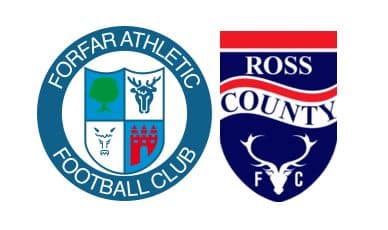