Every day Football Whispers pore over Europe’s major news outlets in search of the latest transfer rumours relating to your club.

Today we bring you the latest on Anthony Martial’s situation and Liverpool’s interest in Presnel Kimpembe.

LIVERPOOL AND EVERTON COULD BATTLE FOR KIMPEMBE

According to French outlet RMC Sport, Kimpembe could soon be on his way out of Paris Saint-Germain. The 21-year-old central defender has been linked with a move to Italian giants Inter Milan, but Liverpool and Everton could enter the race for the player’s signature.

The Merseyside giants are both on the lookout for defensive reinforcements this summer, and the Frenchman would fit the bill perfectly. He’s powerful, athletic, technically sound, and shows remarkable maturity for his age.

Kimpembe displayed the full extent of his defensive sensibility during PSG’s 4-0 Champions League second round thrashing of Barcelona. That match was his debut in Europe’s elite club competition, but he played without nerves against one of the finest attacking line-ups in the world.

Having already added Michael Keane to their ranks, Everton’s backline is already looking stronger than it did last term. Liverpool, however, are yet to bring in new players at centre-back, an area many see as a weakness within Jürgen Klopp’s side.

Kimpembe could be an excellent long-term partner for Joël Matip at the heart of the Reds’ defence. But, considering his age, strategic importance to Paris Saint-Germain, and current contract lasting until 2021, he would likely be an expensive signing.

According to respected German sports magazine Kicker, Bayer Leverkusen striker Javier Hernández could be on his way back to the Premier League. While no concrete offers have been made for the player, he is said to be interesting West Ham United.

The Hammers have struggled to find a consistent scorer to leads their strikeforce in recent years, and the Mexican could be just the tonic. In an outstanding debut Bundesliga campaign, he hit 17 goals in 28 league outings. He followed that up last season with 11 in 26.

Hernández is also an experienced Premier League campaigner, having previously played for Manchester United. During his time at Old Trafford he regularly hit double figures, but he could soon come up against his old club in league action.

Should West Ham look to seal the 29-year-old’s signature, however, they may have to beat off competition from domestic rivals – the striker is also believed to be a Tottenham Hotspur target. 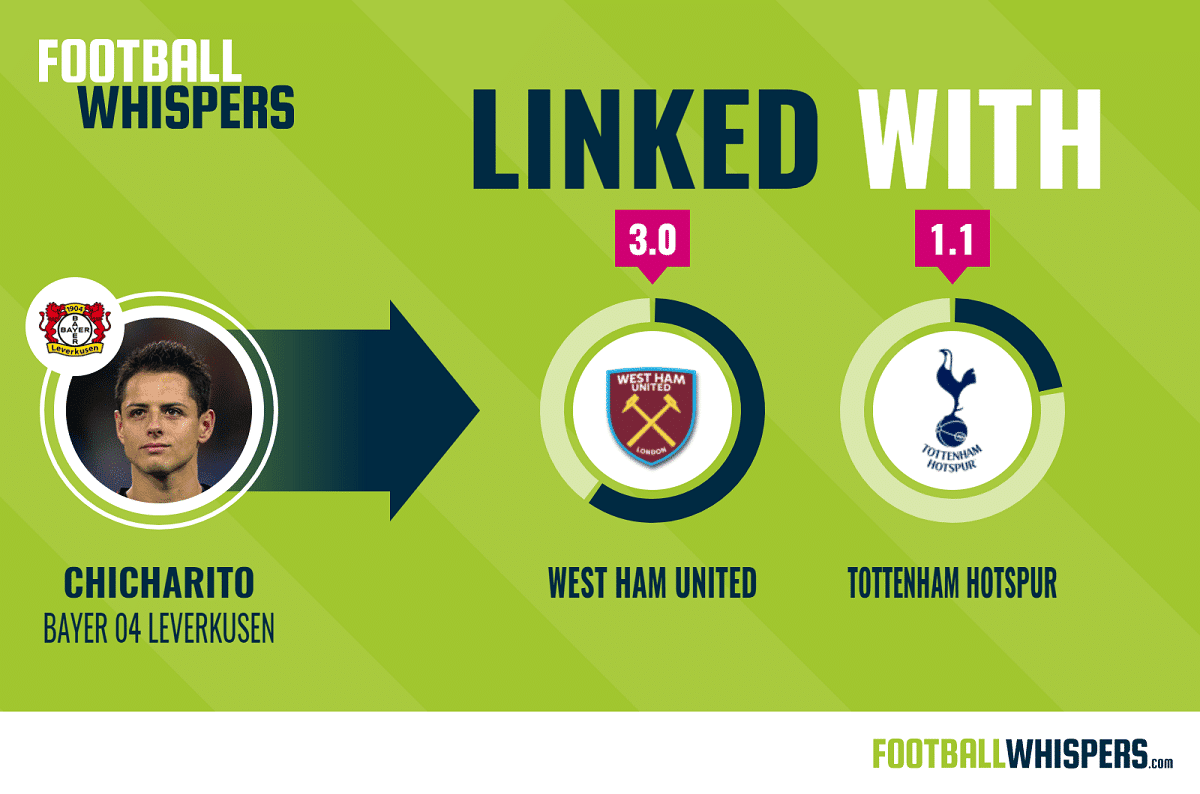 Long-time Manchester United target Ivan Perišić is, according to recent reports, closing in on a move to Old Trafford. However, a deal has not yet been finalised and Inter Milan may want players in return.

The Italian giants, who thus far have been outmanoeuvred by city rivals AC Milan in the summer transfer window, see Matteo Darmian and Chris Smalling as possible options in a player-plus-cash deal for Perišić. They are also considering Martial.

The French forward has yet to kick on as many initially thought when he made his Premier League debut two years ago. He made 18 league starts for United last season, but only scored four goals.

According to Italian outlet La Repubblica, Inter are hoping Martial could come their way in exchange for Perišić, but considering the former is seven years younger and thus has far greater upside, such a move could prove difficult to make happen.

Given their use of Dele Alli and Christian Eriksen behind lone striker Harry Kane last season, it’s no surprise that Tottenham are rumoured to be interested in AC Milan star Suso.

The Spaniard, who spent three years as in the Premier League with Liverpool, is the ideal inside forward – he possesses astounding close control, a brilliant imagination and a sophisticated left foot.

Furthermore, the 23-year-old is yet to sign a new deal with his current club and his existing deal set expires in 2019. And following the significant investment at Milan this summer, he could be available for a reasonable fee this summer.

However, Spurs may have to act quickly to seal a deal as Bundesliga outfit Wolfsburg are also showing an interest in signing the Spaniard this summer.

The German club are hoping to strengthen their attacking options this summer and Suso is one of their targets according to Kicker.