We then, using our unique algorithm, assess the reliability of the rumours, determine the likelihood of the moves, and analyse where the potential signings would fit in.

Today, we bring you news of how one global superstar could be arriving in Ligue 1 just as another leaves, and more twists in Liverpool's pursuit of a top-class midfielder.

The transfer story of the summer appears to be nearing a conclusion as Paris Saint-Germain prepare to trigger Neymar‘s €222million release clause.

However, according to Catalan sports daily Sport, the Spanish football authorities (LFP) may yet refuse to accept the Ligue 1 club's payment of the monumental, world-record-setting figure due to the player's ongoing dispute with Barcelona and doubts over PSG's compliance with UEFA's Financial Fair Play regulations.

Why Does The Premier League Not Want Neymar… by FootballWhispers

These claims are being backed up by Cadena COPE who are reporting that release clause has been deposited with the LFP, but the governing body is refusing to accept it.

However, as reported by Marca, Wagner Ribeiro, Neymar’s representative, is confident the deal will encounter no such issues, insisting: “PSG will pay the release clause and Neymar will be presented in Paris this week.”

Ousmane Dembélé has been mooted as a Barcelona transfer target all summer, and it appears that Catalan giants will turn to the Borussia Dortmund winger to replace Neymar, with Marca appearing to confirm as much.

The gifted 20-year-old Frenchman has also been the subject of a bid from Arsenal according to Mundo Deportivo, who say the Gunners' offer was rejected by BVB.

Capable of playing on either flank and genuinely two-footed, Dembélé took the Bundesliga by storm last season, scoring six goals and providing an impressive 12 assists. The dribble-happy France international certainly has the kind of flair and creativity to plug the imminent Neymar void at the Camp Nou.

One man who will not be moving to Barça this summer, according to AS, is Manchester United transfer target Antoine Griezmann.

The Frenchman ruled out a move away from Atlético Madrid earlier this summer following Los Colchoneros‘ unsuccessful appeal against their transfer ban, and he remains committed to staying with Diego Simeone's side. 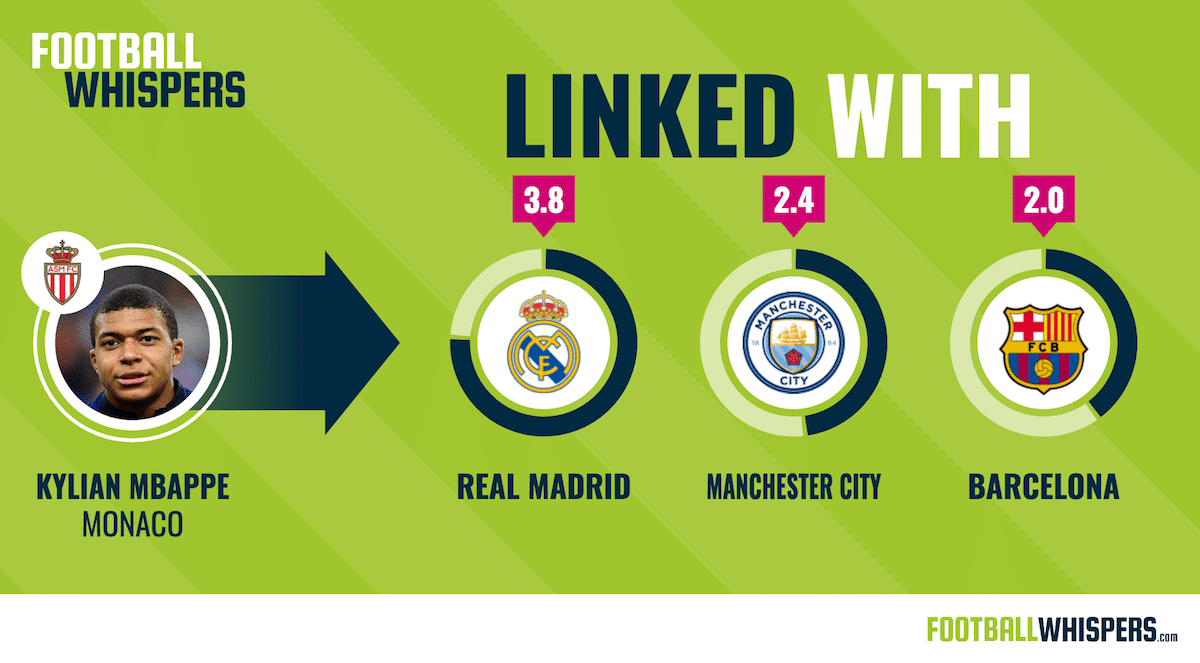 Teenage striking sensation Kylian Mbappé, believed to be Real Madrid's top transfer target this summer, has informed Monaco that he wants to leave the club.

The news was first reported by Paris United on Twitter and has been backed up by L'Equipe.

According to both sources, Madrid, Manchester City and Barcelona are all in the running for the 18-year-old forward who burst onto the European scene last season.

Despite having less than one full campaign under his belt, it is likely that a fee of at least £160million will be needed to acquire his services. That would make Mbappé the second-most expensive player in history – assuming Neymar's move to PSG goes through first – and the most costly teenager ever.

In Germany, Bild reports that RB Leipzig's sporting director, Ralf Rangnick, has admitted that Naby Keïta is unlikely to sign a new contract with the club.

This is significant in that the Liverpool transfer target will be available for as – relatively – little as £48million next summer thanks to a release clause in his current deal that will become active at the end of the 2017/18 season.

Keïta has been at the top of Jürgen Klopp's wishlist for months now and RBL have, thus far, rejected the Reds' advances for their star man, reportedly turning down a £66million offer for the player they signed from sister club Red Bull Salzburg for just £11.75million a year ago.

It now seems likely, however, that Leipzig will lose the gifted Guinean in 12 months' time, when the activation of his release clause will surely cause a scramble among Europe's elite clubs to secure his signature.

On a more positive note for Liverpool, Lazio midfielder Sergej Milinković-Savić, who is believed to be considered an alternative to Keïta for the Anfield club this summer, might just have become available.

The Serie A side have slapped a €50million price tag on the 22-year-old Serbian's head, a price that may seem prohibitive to many sides, but would represent real value for Liverpool.