On Wednesday night, despite a shaky start, Arsenal were competing well against Bayern Munich. Level at half-time with everything to play for. Then it collapsed. Losing 5-1, regardless of how good the opponent play, is inexcusable. This should be the last straw for Arsène Wenger.

If Arsenal want to have any chance of keeping Alexis Sanchez this summer, the Frenchman must go.

“The real problems we faced were after the third goal,” said a broken looking Wenger after the game. “We lost our organisation and were mentally jaded. The last 25 minutes were a nightmare for us. It looked like we had no response.”

If he truly believes that the only problems came in the last 25 minutes, then he is deluded as well as broken.

The opening goal was a mess. 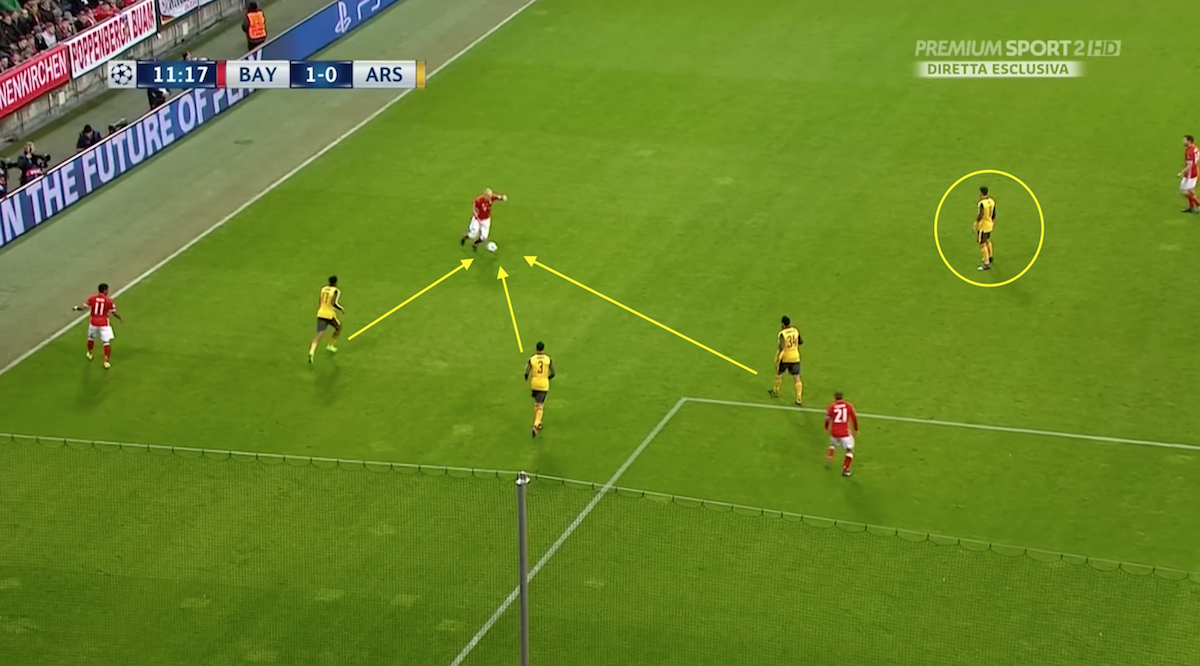 Mesut Özil (circled) showed absolutely no intention of closing down the danger when the ball was played back to Arjen Robben. Even looking in the opposite direction. 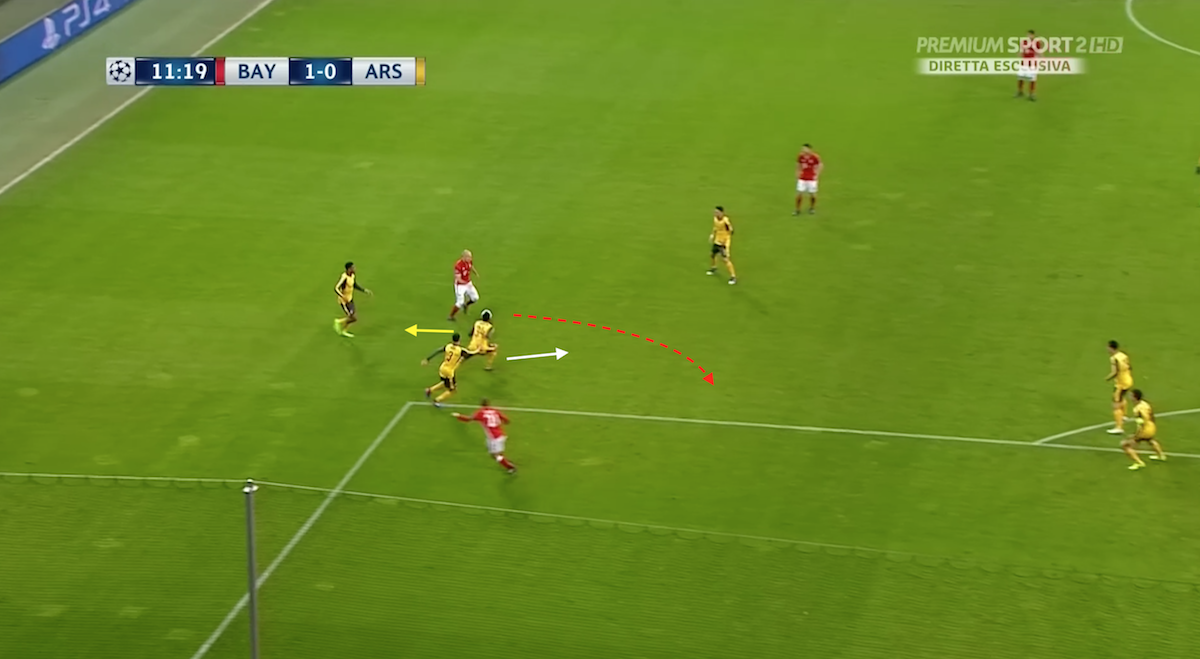 Francis Coquelin then made the cardinal sin of allowing Robben on to his left-foot.

Although many a defender has failed to stop the Dutch winger doing the very same move, not many have blatantly allowed him to cut inside so easily, almost showing him on to his favoured side.

“Koscielny? I would have loved to keep him on the pitch,” admitted Wenger. “After that it is difficult to measure the real impact. The fact is, we have to cope with the result. We have an extremely bad result.”

Without your best centre-back, you need to limit balls into the box and that means working your socks off down the flanks.

Even at 1-1, with your team still in the game, Arsenal failed to show determination in defence. 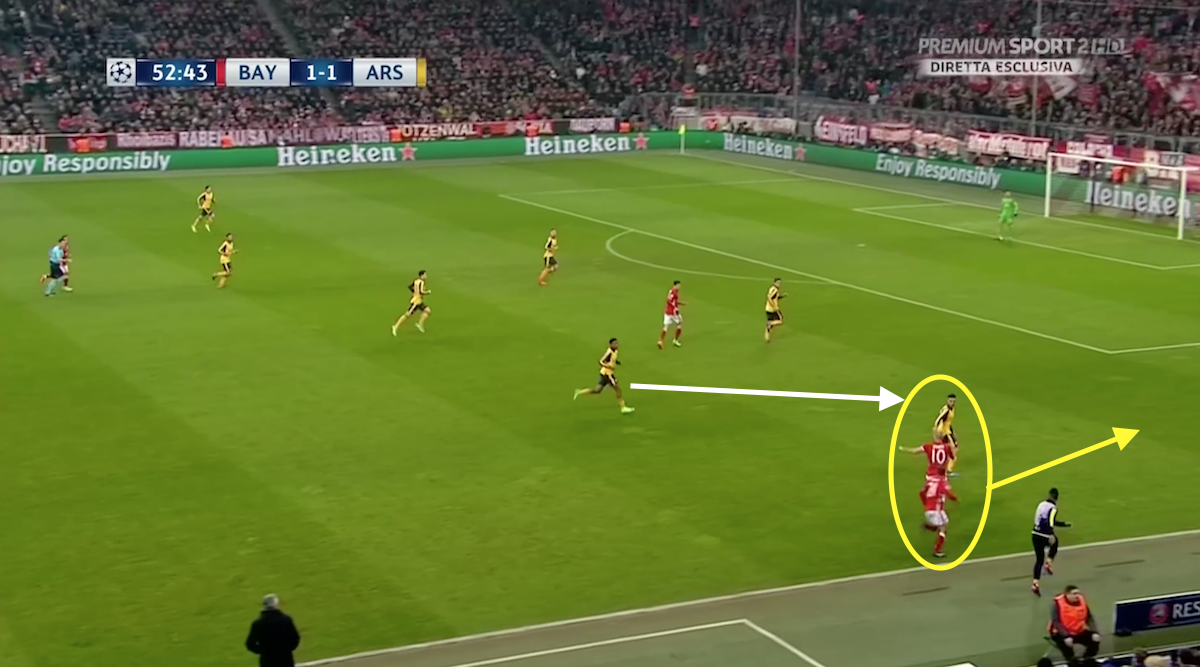 Alex Iwobi, playing on the left, doesn’t work hard enough to provide support to Kieran Gibbs. Philip Lahm is allowed to get wide on the overlap and delivers a superb cross to Robert Lewandowski. 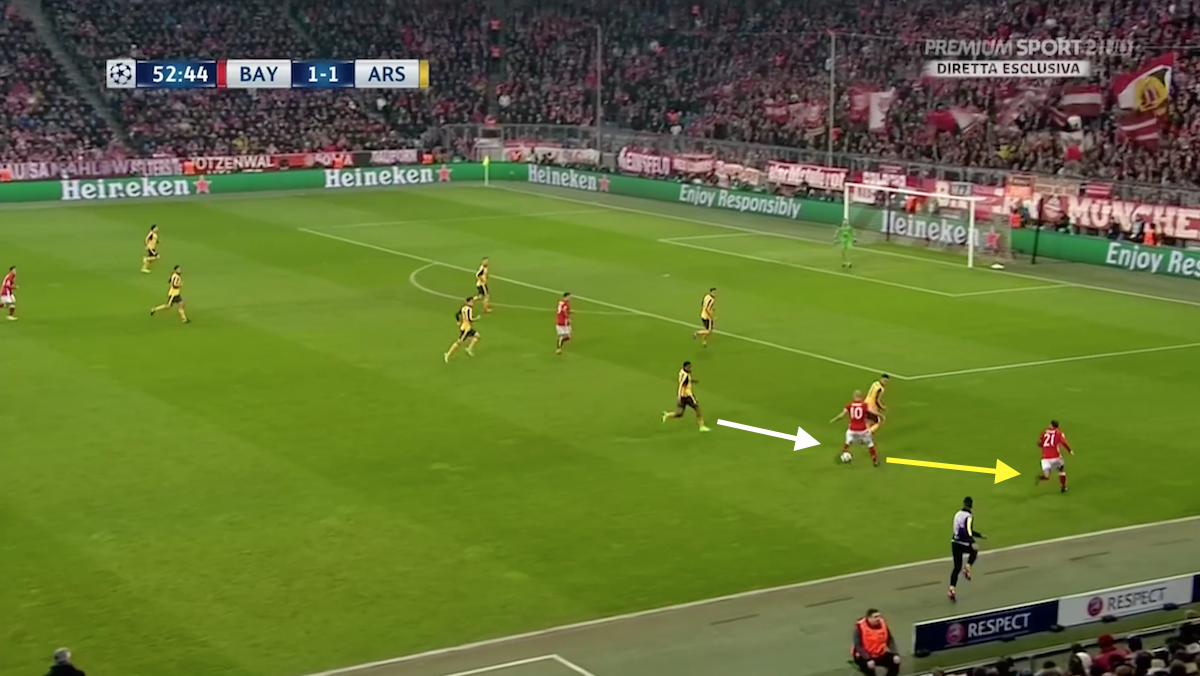 Then for the third goal, when 2-1 away at the Allianz Arena would have been a great result, Arsenal switched off completely.

Shkodran Mustafi, too busy barking orders at the rest of the defence, completely takes his eye off Thiago Alcantara and the Brazilian waltzes into the penalty area to score a well built-up goal. 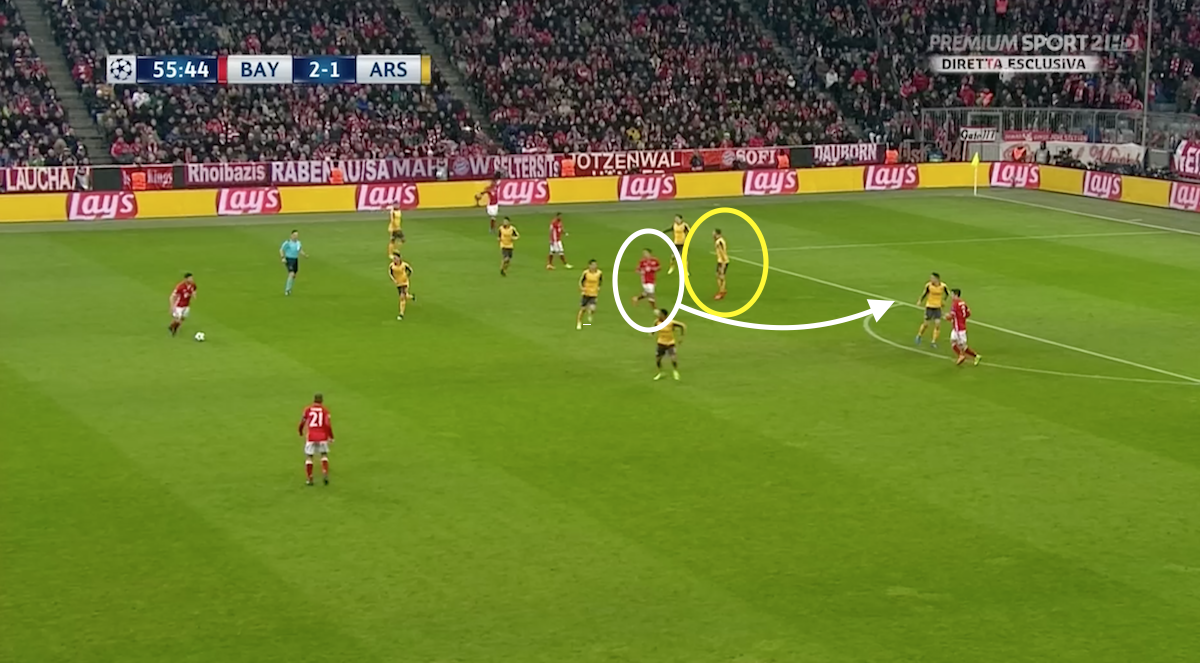 This is a team void of fight and the fear of being benched, bollocked, and even given a stern telling-off.

Arsenal too reliant on Sanchez 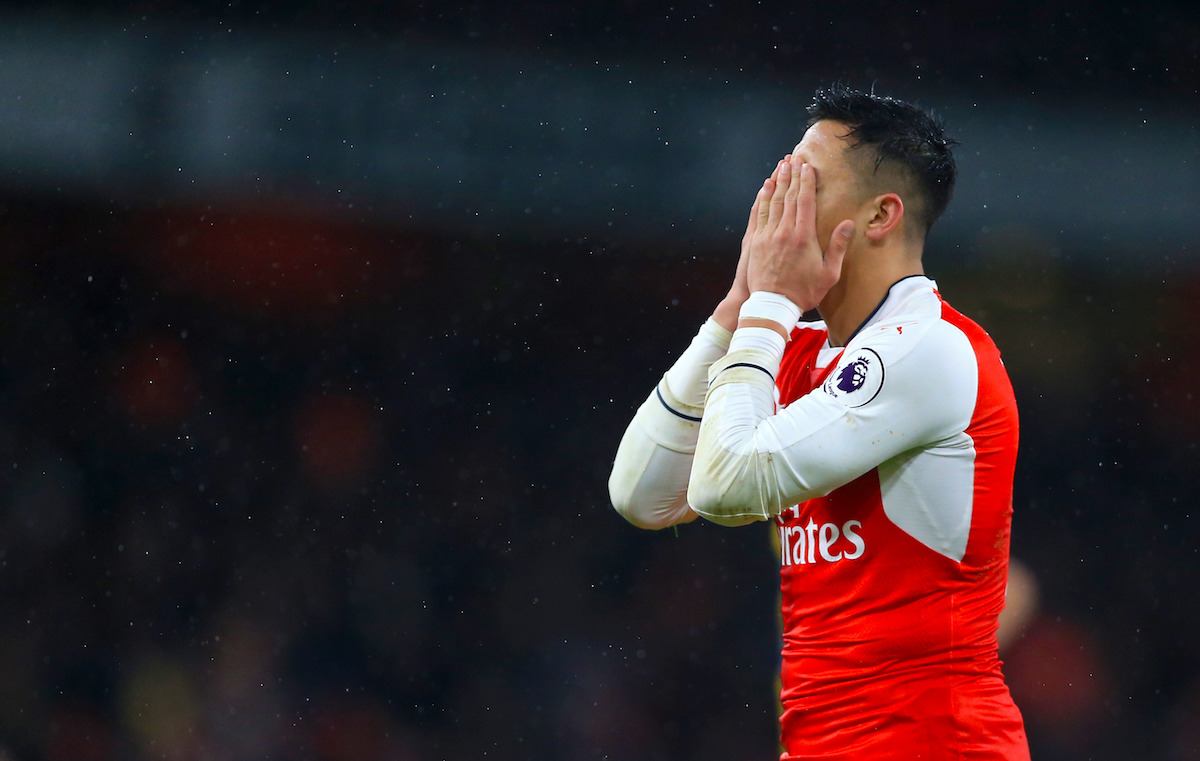 READ MORE: FIVE REASONS WHY ARSENAL WILL COME UP SHORT

Take away the back five and the merits of Laurent Koscielny and Petr Cech, when it comes to the front six, Sanchez is the only player with any class.

You don’t even have to say World-class, because there are a few teams that even the great Sanchez might not get into, but he is a step above the others.

To be truthful, the other five are nowhere near his level. It’s Sanchez and five traffic cones at times.

READ MORE: WHY ALEXIS SANCHEZ IS THE BEST STRIKER IN THE PREMIER LEAGUE

As was clear in the 2-0 win over Hull City, Arsenal need Sanchez more than the Chilean needs them.

This season, the Gunners are scoring 2.2 goals per game on average, they are the joint top scorers in the Premier League.

With 17 goals and eight assists in the league, Sanchez is involved in 46 per cent of all his club’s goals. Only Manchester United, with Zlatan Ibrahimović involved in 50 per cent of their strikes are more reliant on one player.

Diego Costa at 38 per cent, Harry Kane at 37, Sadio Mane lower on 27 and Kevin De Bruyne the lowest of the top six on 25 per cent.

They all have their standout performers, but Arsenal don’t have the supporting cast to back up their title aspirations, or an attempt on the Champions League.

Manchester United’s over reliance on Zlatan also comes from the fact they have only scored 38 goals this campaign, more than any of the other top six clubs.

Before Wednesday’s game, there were calls to drop Özil from the fixture. The German playmaker has never been a hard-worker, he’s not a leader and he’s the last type of player you want when you are not going to see much of the ball.

Manuel Neuer completed more passes than the 28-year-old, but that’s more a criticism of Wenger than Özil. You know what you are getting from the former Real Madrid man, and that’s not work-rate.

Wenger would have been much better playing either Olivier Giroud or Danny Welbeck. The Frenchman’s reluctance to drop him for the big occasions, after consistently under-performing, suggests a manager who has all but given-up.

“This is football. Arsene has a lot of experience, and he will be able to manage this moment and this result.” Carlo Ancelotti said when asked about Wenger’s ability to react to this defeat. “He will just be looking ahead to the next game –  this is only one game.”

Time for a new way of thinking

A team with no fear of their manager, who both expect and accept failure. Arsenal are not realistically aiming for success under Wenger.

It’s time for a change at the Emirates. The board must stop worrying about net-spend and look at keeping up with the rest of the Premier League.

It’s not just about finishing in top four, it’s about growing a team and looking to the future. Wenger is no longer providing that.

Both Özil and Sanchez want to know the situation with the manager before deciding on new contracts, but him staying might not be the answer they need.

Wenger changed the game, he would sign relatively unknown players, develop them and turn them into world-beaters.

He no longer does that. Even when he does spend, Granit Xhaka cost more than Chelsea paid for N’Golo Kante, it hasn’t gone well.

In the past, Wenger would have spotted the French midfielder before the others and signed him before he was a Premier League winner. That’s what he did with Emmanuel Petit and Patrick Vieira, but the game was different then.

Now, scouts watch games from all over the world and the touch of a bottom, the world has passed Wenger by and Le Professor looks to have no intention of changing with it.

New ideas, a new mentality and a belief that the club wants to grow and add players of a similar quality around Sanchez. Otherwise, what’s the incentive for the 28-year-old to stay.

He joined Arsenal to win trophies and right now, this club has never been further away from that. With all the respect in the world for one of football’s greatest managers, it’s time he let the club go, only that way can they keep Sanchez and move forward.

Arsenal Need to Drop Mesut Özil to Save Their Season