Sport is a young person's game, right? That's how it's always been.

Men and women have historically reached their physical peak during their late 20s and early 30s. Then the decline begins. And this has, for a long time, been the case in men's football.

Over the years, football has gotten faster, more tactically sophisticated. It's an enormously enervating pursuit at an elite level, too draining for an ageing body (or indeed mind).

A footballer's career has always been brutally short. Most don't develop fully until they're well into their 20s, peak between 26 and 30 and generally decline as they progress through their 30s, with 36 a regular point at which they decide to call it quits. Goalkeepers usually last a few more years.

But sport has changed over the last few decades. Training and nutrition have become so religious that it almost allows one to defy the body.

Just look around. Roger Federer and Serena Williams, both 37, are still competitive in men's and women's tennis. LeBron James, 34, is still one of the best basketballers around – he's about to enter his 17th season. Tom Brady, now in his 40s, won his sixth Super Bowl this year.

Even Tiger Woods. While golf isn't as physically taxing as tennis or basketball, winning The Masters at 43, two years after undergoing spinal fusion surgery, will go down as one of the great sporting achievements.

So times have changed, and nowhere is this more noticeable than in football.

Longevity doesn't happen by accident, of course. It takes an unimaginable amount of hard work and dedication. Ryan Giggs didn't happen to just keep up until he was 40. He worked for it. So, too, did Javier Zanetti, Francesco Totti and Paolo Maldini.

Cristiano Ronaldo has altered the landscape further. He is a physical freak. Even at 34, he remains one of the most striking physical specimens in football, and he is showing no signs of abating.

Ronaldo, it seems, has inspired his fellow ageing assassins to up their game.

Let's look around Europe. Fabio Quagliarella, 36 years young, has just won Serie A's Capocannoniere after scoring 26 goals for Sampdoria. Nine of those were penalties but threatening 30 goals at his age is a remarkable achievement, especially when you consider he hadn't broken the 20-goal barrier since 2009.

Jamie Vardy is another impressive case study. The Leicester City striker is a different player to Quagliarella, his game built more on speed than positional awareness, although he's pretty good at knowing where to pop up too. 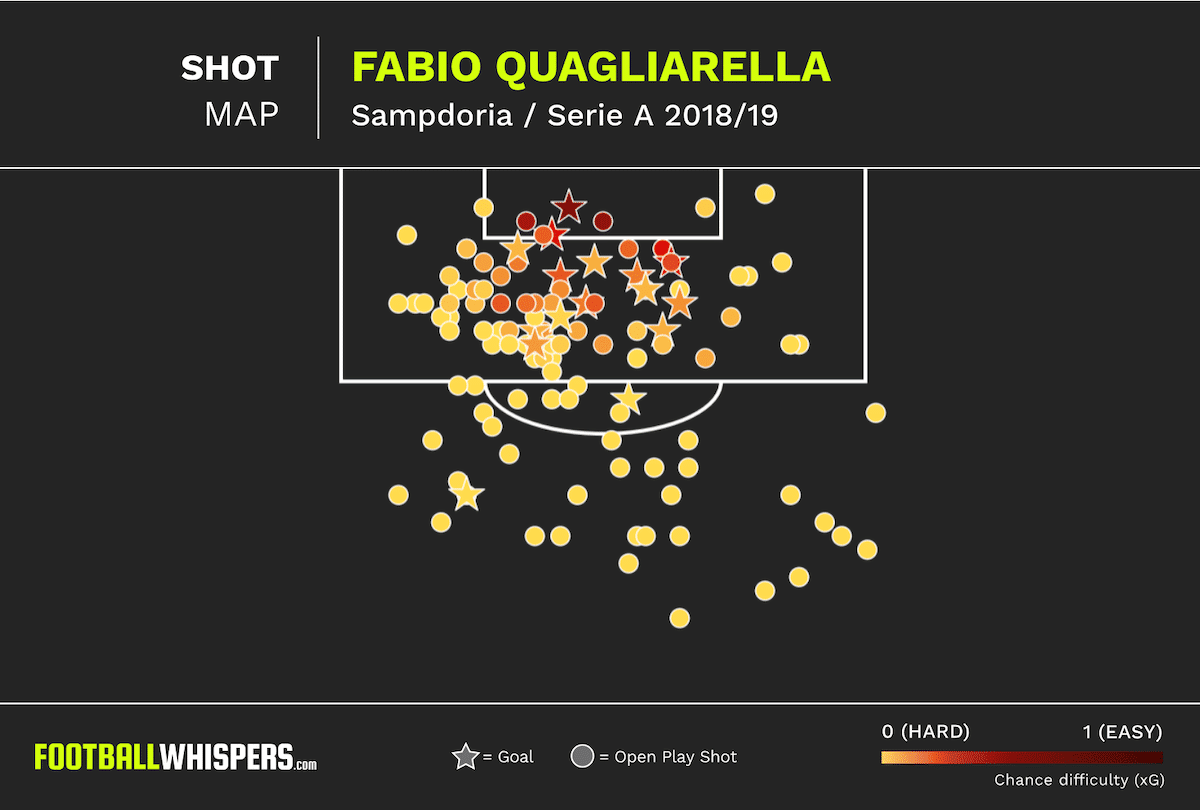 Arsenal's Pierre-Emerick Aubameyang, another forward whose game is built on speed, will be 30 in a few weeks. He scored 22 to share the Premier League Golden Boot with Mohamed Salah and Sadio Mané.

In Germany, Robert Lewandowski continues to arouse suspicion that he is more machine than man. The Pole, who'll turn 31 in August, just reached the 40-goal mark for the fourth season in a row with Bayern Munich.

Messi is, as we've deduced by this stage, not of this planet but the fact Benzema had his best season in all competitions since 2011/12 is impressive, especially given Real Madrid's travails this season.

Aspas, meanwhile, will be 32 in August. Having spent six weeks out injured, he returned in late March and duly tore opposition defences asunder with ten goals and four assists in nine outings.

Edinson Cavani is far from over the hill, too. The Uruguayan had his injury troubles this season but still scored 24 goals in 33 games for Paris Saint-Germain. 33 next February, he's tipped for a move to Atlético Madrid.

Six out of the top seven scorers in the Champions League were at least 30 (Moussa Marega, at 28, was the exception), while Chelsea's Olivier Giroud, 32, can end the season as the Europa League's top marksman if he finds the net during Wednesday's final against former side Arsenal.

They're also doing it in Holland. Dusan Tadić had a season for the ages with Ajax while Klaas-Jan Huntelaar and Robin van Persie, both 35, netted 31 times between them for Ajax and Feyenoord.

In terms of open-play xContribution (xG+xA) per 90 mins, Luis Suárez is out in front. His 0.80 is followed by Ronaldo's 0.75, with Cavani rounding out the top three with 0.72. Even Edin Džeko, whose goalscoring output dipped for Roma, managed 0.70. That's still better than Mauro Icardi, Krzysztof Piątek and two-time Capocannoniere winner Ciro Immobile. 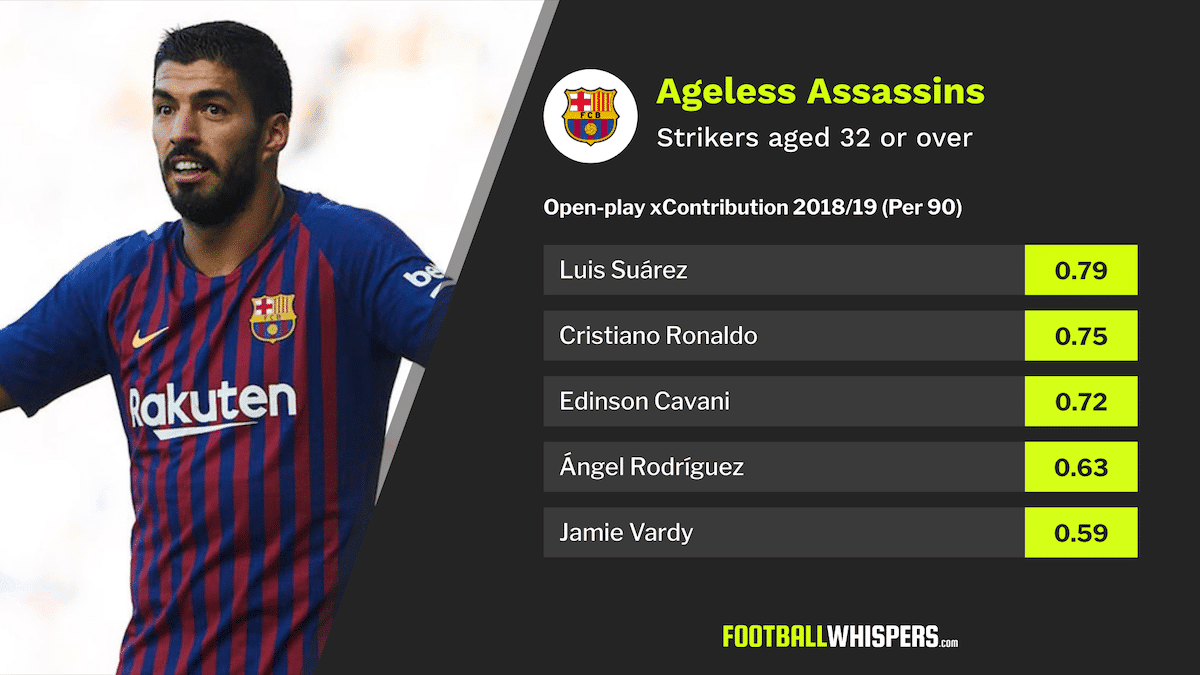 Strikers can perhaps evade the inevitable passage of time more effectively than players in other positions. A box-to-box midfielder's stamina and energy will fade during his 30s while an overlapping full-back will find it difficult getting up and down the pitch as frequently as in his younger days (see Gary Neville).

Football is still the cradle of young talent. The likes of Kylian Mbappé, Jadon Sancho and João Félix, none of whom can legally drink in the United States at the time of writing, are the future of the game.

But age – as football's band of seasoned strikers led by the impossibly cool Quagliarella have shown us – is indeed just a number. If anything, seeing ‘3' and ‘0' together is motivation for them to show the young upstarts a thing or two.