We're heading into the business end of the season now and clubs already have one eye on next year's campaign.

Plans are well underway to bring the best possible players in. With this in mind, we've taken a look at today's top 10 whispers.

Eden Hazard is a transfer target for Real Madrid as Los Blancos look to land their next galáctico. The Daily Mirror claim the Belgian tops Zinédine Zidane’s list and the La Liga giants are prepared to throw Spanish striker Álvaro Morata into any deal in an attempt to lure Chelsea into selling them their playmaker.

The 26-year-old has rediscovered his form under Antonio Conte and has 13 Premier League strikes to his name having netted both goals in the 2-1 win over Manchester City. He’s been a key part of the Italian's tweaked 3-4-3 formation which has seen them climb to the summit of the league.

An attacking trio of Hazard, Gareth Bale and Cristiano Ronaldo is something you regularly see on FIFA Ultimate team and it may be a sight fans at the Santiago Bernabéu are treated to next season.

The Sun are reporting that Tottenham Hotspur are ready to once again test the resolve of Crystal Palace by making a move for the in-form Wilfried Zaha. Spurs reportedly wanted the former Manchester United man last summer but a deal couldn't be agreed.

Liverpool had shown an interest in the Ivorian International but it appears Mauricio Pochettino has once again muscled his way to the front of the queue as he looks to prepare for a second successive Champions League campaign. Reports suggest Zaha is stalling on signing a new £100,000-per-week deal at Selhurst Park as he wants to test himself in Europe's elite competition.

The Spurs attack would look quite formidable with Zaha, Christian Eriksen and Dele Alli behind the prolific Harry Kane. 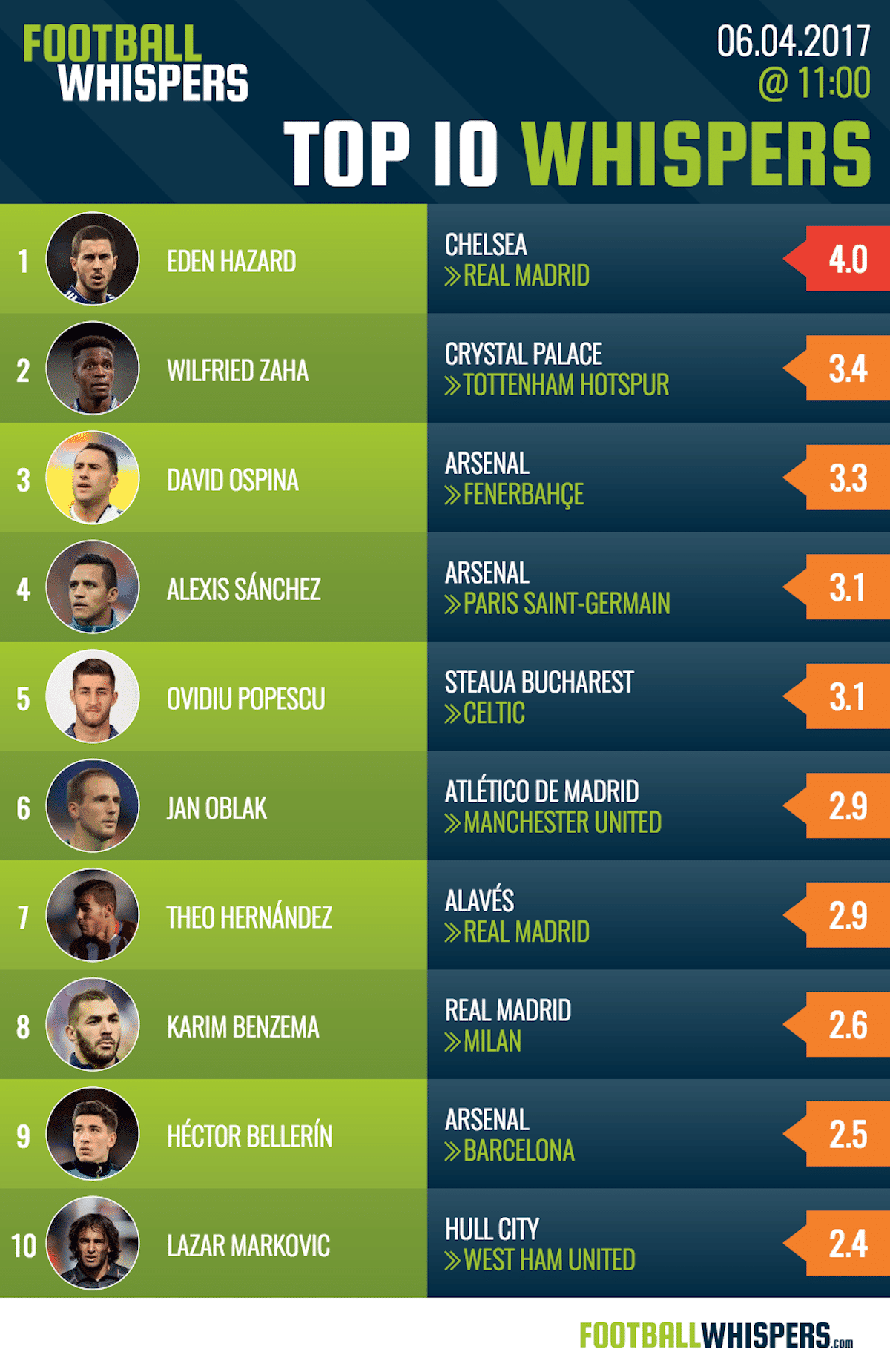 STAY IN THE KNOW – FOOTBALL WHISPERS.COM

Arsenal’s reserve goalkeeper David Ospina is being linked with a move to Fenerbahçe. Reports in the Sun suggest the Gunners have agreed to sell the Colombian shot stopper to the Turkish giants for £6million in the summer. According to news outlet Fanatik, Fenerbahçe are interested in signing Ospina – offering him an opportunity to become their No.1 ‘keeper.

The 28-year-old’s current contract expires in 2019 and it’s believed if he does make the switch to the Turkish Super Lig they will match the £40,000-per-week salary he currently earns at the Emirates. It could be a summer of change for Arsenal with Petr Cech expected to be replaced as the clubs number one.

Paris Saint-Germain are looking to take advantage of the fact Alexis Sánchez is dragging his feet over a new deal at the Emirates. According to RMC Sport, the versatile Chilean forward has held talks with the Ligue 1 giants ahead of a proposed summer move.

The 28-year-old attacker has just a little over 12 months left on his current deal and can effectively name his price to any interested parties. Arsenal are being forced to sell him this summer at a knockdown price to ensure they don't lose him for free next year.

According to the Daily Record, . Representatives from the club were present for the versatile midfielders recent match against Dinamo Bucharest and held talks with the Romanian club’s owner, George Becali. The 23-year-old has an £8million release clause in his deal meaning Brendan Rodgers will have to break the club's transfer record to secure his services.

According to the Manchester Evening News, Manchester United have identified Atlético Madrid goalkeeper Jan Oblak as the man to replace David De Gea. Oblak has been one of the best ‘keepers in Europe over recent years and caught the eye of many recently when he pulled off a couple of stunning saves against Bayer Leverkusen in the Champions League.

José Mourinho is preparing for life after De Gea with Real Madrid set to finally secure the services of the former Atlético goalkeeper. United had been linked with a number of potential replacements but it now appears as though the 24-year-old Slovenian could be calling Old Trafford home in the near future. He has a deal with Atleti until 2021 but as shown with Paul Pogba, if the Red Devils want a player it's near impossible to stop it from happening.

Atlético Madrid's Theo Hernández is a target for neighbours Real. Zidane is after a long-term replacement for Marcelo and Hernández, on loan at Alavés this season, appears to tick all of the boxes.

Liverpool are set to rival the La Liga leaders with a move for the 19-year-old according to The Independent but they Anfield club are match for the bright lights of those playing at the Santiago Bernabéu.

AC Milan are set to make a big statement in the summer transfer window with an offer for Real Madrid’s Karim Benzema. Tuttosport claim The Rossoneri will make a move for the Frenchman as the club’s new owners look to signal their intent to take Milan back to the top.

The 29-year-old won’t be cheap with his current deal expiring in 2019. But Milan are prepared to put money where their mouth is to land their top target. He could follow legendary striker Ronaldo in swapping the white of Madrid for the red and black of Milan.

Like former Arsenal hero and now villain Cesc Fàbregas, Héctor Bellerín may opt to leave the Emirates and return to Barcelona, the club he left as a teenager. SER Catalunya radio show La Graderia claims that the player met with Barça’s sporting director Robert Fernández in London before the international break.

The 22-year-old only signed a new deal with the Gunners in November, to extend his stay in London until 2023, but the Catalan club have identified Bellerín as their long-term right-back solution.

With his form being a little patchy this season and the player being far from his consistent best, perhaps now is the time for Arsène Wenger to cash in on the player while his stock is still high. It’s happened before and it will happen again, Arsenal will sell to Barcelona.

West Ham United are once again being tipped to sign a Liverpool flop. West Ham transfer rumours suggest Lazar Marković is being linked with a £16million switch to the London Stadium as manager Slaven Bilić looks to replace the flair lost with the sale of Dimitri Payet.

It's not the first time the Hammers have signed a player who failed to light up Anfield. Both Stewart Downing and Andy Carroll made the move down south and The Daily Mail are reporting the Serbian could be set to take a similar route after impressing with Hull City on loan.

The 23-year-old has just the two years remaining on his current deal with the Merseyside club and looks set to move on after being told he isn't part of Jürgen Klopp's plans. It's definitely one to watch as we creep into the summer transfer window.