The Christmas period sets the Premier League apart from the rest of Europe and is one of the most exciting parts of the season.

None of the other big European leagues play over Christmas. They all put their feet up, rest and recharge their batteries for the second half of the campaign.

But not here, no sooner is Christmas lunch over and the players are training for the Boxing Day fixture. There's another match a couple of days later and usually one on New Year's Eve of New Year's day.

This season, Premier League clubs will play up to four times in nine days over a breathless festive period. With that in mind, we've put together our ultimate Christmas XI. 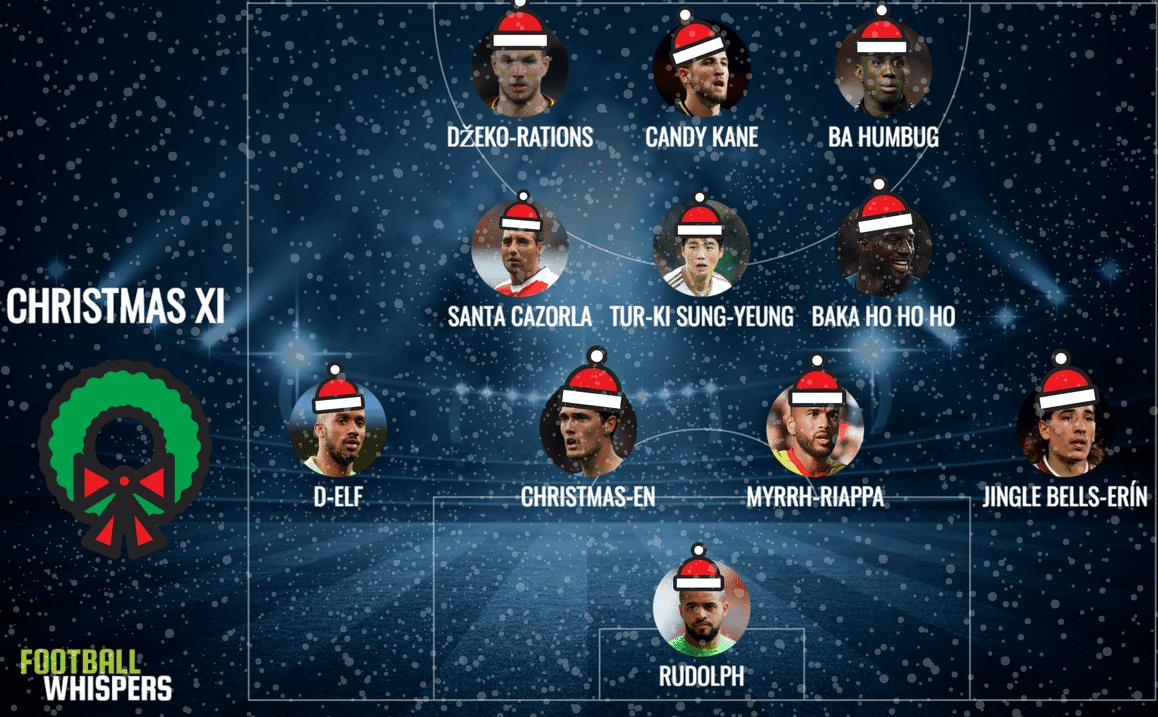 The Middlesbrough stopper might not boast a red nose but he was left red-faced on several occasions last season at West Ham United.

The Hammers cut their loses and sold Ireland keeper Randolph to ambitious Boro in the summer but the Teessiders are yet to click.

Arsenal defender Bellerín is a player who'd appreciate a Christmas break more than most having left Spain at a young age to join the Gunners' academy.

It was a decision which paid dividends, though, and the Catalan has been touted as a Barcelona transfer target in recent seasons.

Chelsea defender Christensen has been a revelation for the Blues with David Luiz out of form and out of favour.

And the Dane's surname lends itself perfectly to this team making him the ideal man to marshal the backline.

Mariappa and his Watford team-mates have been in the Christmas spirit recently – much to the irritation of their fans.

After blowing a 1-0 lead to lose 2-1 at Crystal Palace at the death, they then capitulated at home to a Huddersfield side who hadn't scored away from home since the opening day.

The Manchester City utility man has been a surprise star at left-back for the champions elect, slotting in for the injured Benjamin Mendy.

And, just like at City, we couldn't find a natural full-back so the industrious midfielder will fill in at No.3 in our Christmas XI.

Monaco must be ho ho ho-ing all the way to the bank after pocketing £35million from Chelsea to sign the midfielder last summer.

One of the stars of les Monegasques' shock title win and Champions League run, Bakayoko has struggled to replicate his imperious form in the Premier League.

The Swansea City midfielder has not been a regular for Paul Clement's strugglers this term.

But the South Korean midfielder is every bit as ‘Ki' to this side as a turkey is to the perfect Christmas dinner. Our mouths are watering already.

We know what will top Santi's Christmas wish-list: a clean bill of health and a return to first-team football after more than a year on the treatment table.

Arsenal‘s Spanish midfielder has endured rotten luck with injuries in the last two seasons and has not played since November 2016 and, in that time, has had nine operations on an Achilles problem.

A practising Muslim, kneeling and bowing his head to celebrate his goals, we've got no evidence to suggest the Shanghai Greenland Shenhua forward is a Christmas grinch.

But, sadly for Demba, his name lends itself perfectly and so he's into this festive XI as the least joyful member of the side.

It's safe to say 2017 has been pretty sweet for the Tottenham striker who has bagged more than 30 goals for club and country.

That's form which puts Kane up there with Cristiano Ronaldo and Lionel Messi and seen him become a Real Madrid transfer target too.

The Bosnian forward arrived at Manchester City in 2011 having enjoyed a prolific spell in Germany with Wolfsburg.

He was never Roberto Mancini's first choice but has been on the goal trail since moving to Roma in 2016 with a better than one-in-two record in Serie A.