Over the last 20 years, with the ascendancy of the galácticos, the ceiling at the Spanish giants has, in many cases, been high and unattainably so.

That players like Samuel Eto'o and Zé Roberto were unable to break into the Real first-team before finding immense success elsewhere speaks volumes about the historical competition for places at the Bernabéu.

But the landscape is changing. Cristiano Ronaldo's departure last summer felt like a watershed moment. Not only was it terrifying for the club given his astounding, record-shattering goalscoring exploits over the previous decade, but it felt as though a sign of the times.

Zinedine Zidane, one of the club's most celebrated galácticos, also stepped away, vacating his managerial post after clinching a hat-trick of Champions League crowns. Zizou and CR7 departing felt symbolic, especially considering the coach and player they got to replace them.

While Julen Lopetegui had impressed with the Spanish national team, he was a radical departure from the glamour, charisma and cool of his predecessor.

The club's moves in the transfer market were somewhat low-key too. Although they spent plenty of money to sign Thibaut Courtois, Álvaro Odriozola and Mariano Díaz, their two biggest outlays were on a couple of untested Brazilian teenagers; Vinícius Júnior and Rodrygo Goes.

It seems as though, with Ronaldo gone and Luka Modrić set to follow the Portuguese superstar out the door sooner rather than later, Real are building for the future, placing their faith in the next big thing, rather than the established thing.

They are not coming cheap, of course. Vinícius, who joined in the summer from Flamengo, cost in excess of £50million while Rodrygo, who will link up with Los Blancos in June when he leaves Santos, will arrive in a deal worth £40million.

Real have embarked on a new strategy, one which involves earmarking the hottest South American talent and recruiting them at the earliest possibility. You can't blame them, considering how they had spurned chances to sign Neymar before he eventually joined Barcelona in 2013.

There has been a string of quiet windows. In 2017, Theo Hernández was the biggest signing at £21million. A year earlier, it was re-signing Álvaro Morata at £27million. In 2015, there most expensive capture was Danilo at £28million.

The last headline-dominating arrival was James Rodríguez in 2014 but, after a lean spell, Madrid are willing to put their money behind a different, younger breed of galáctico.

And while the club's fans have been getting acquainted with the raw but undeniably talented Vinícius this season, Rodrygo remains an unknown quantity.

Here's what they can expect.

Rodrygo is the newest spectacular talent off the Santos production line, set to follow in the footsteps of Neymar and, more specifically Robinho, who went straight to Real from the Brazilian club in 2005.

Born in Osasco, São Paulo, he joined Santos aged ten. After six years with the club's famed youth academy, he signed a professional contract in July 2017 and was promoted to the first-team just four months later.

And it wasn't long before he started turning heads. At just 16 and standing a mere 5ft 8ins, Rodrygo looked like a cheeky kid on a pitch full of grown men.

The only problem is this kid clearly did not believe in respecting one's elders given the manner in which he continually left the opponents kicking thin air as he raced past them.

It also wasn't long before clubs like Real began keeping a close eye on his progress, their scouts undoubtedly filling dossiers with glowing eulogies about a potential megastar.

Because that's what Rodrygo is; raw and unrefined, yes, but a player of enormous, superstar ability.

Young players with a blistering surge of acceleration across short distances are always likely to catch the eye right off the bat – and his pace has obviously not gone unnoticed.

While he has played centrally and on the right for Santos, his favoured position has been on the left flank. There, he usually engages in one of two actions: zipping past the full-back's right shoulder or using his low centre of gravity to cut back inside and shoot with his stronger right foot.

During the 2018 season, he averaged 7.5 dribbles per game, offering a glimpse into the regularity with which he looked to up the tempo.

He doesn't just use his pace to zoom down the wing, though, it's often about getting into scoring positions. 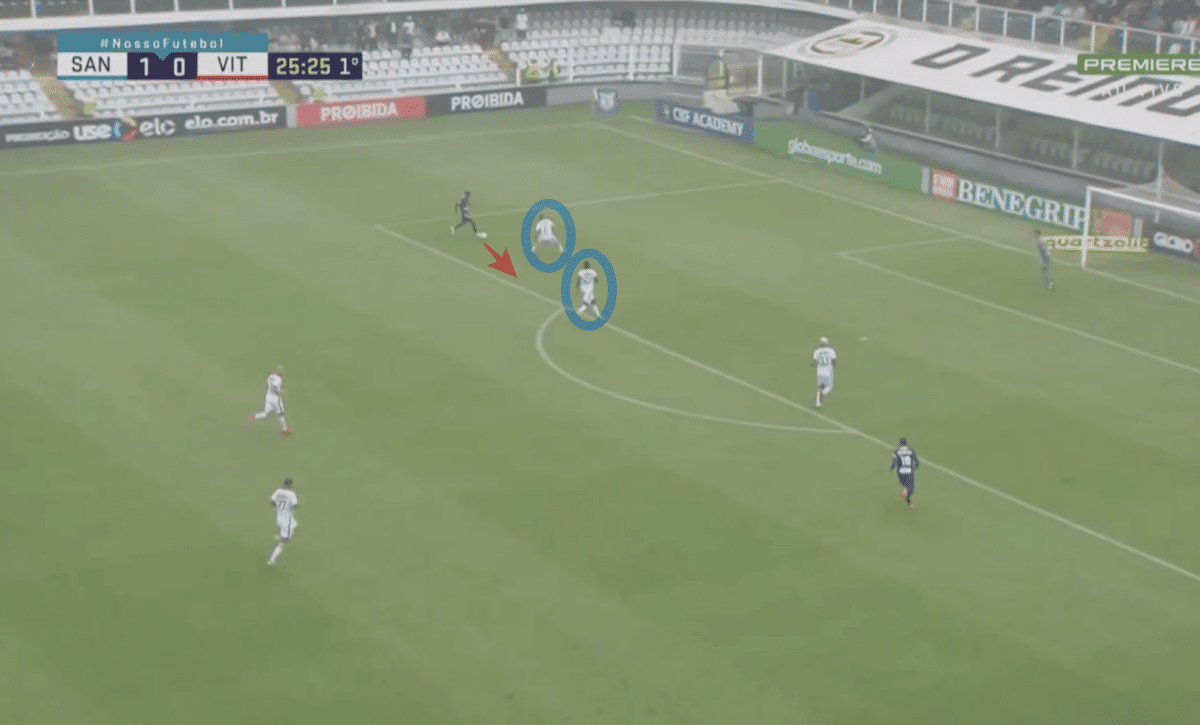 In Santos' 5-2 win over Vitória, a game which brought Rodrygo his first hat-trick, his second goal encapsulated how he can turn past defenders in the blink of an eye. 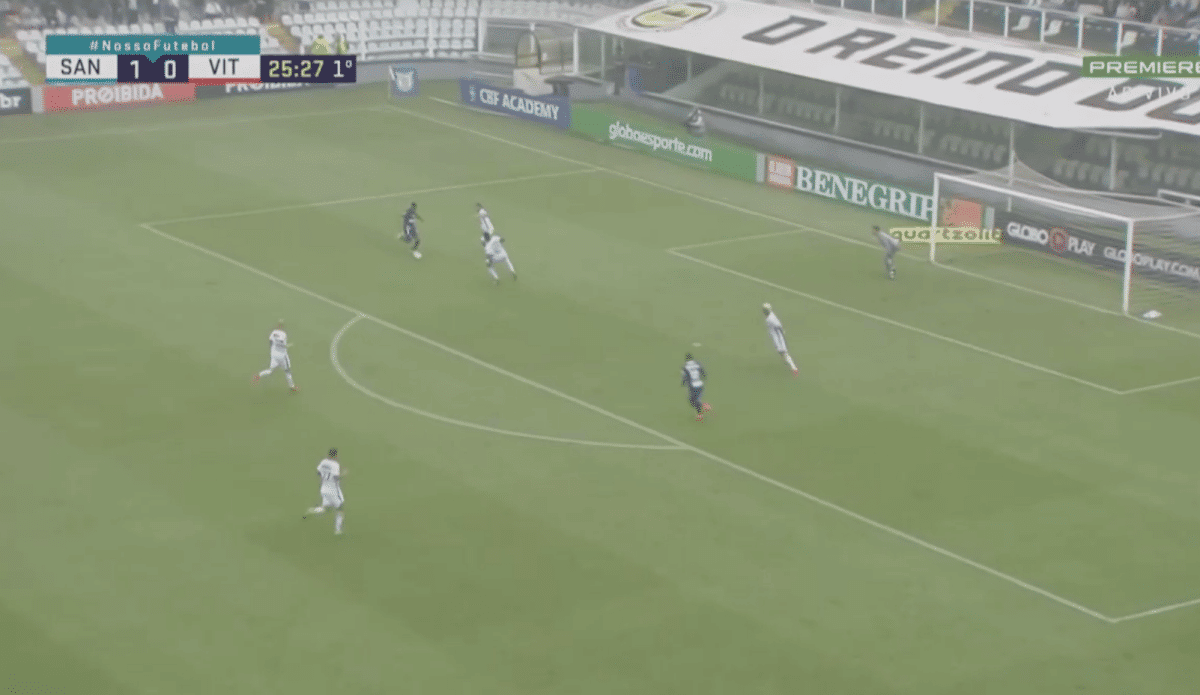 Initially feigning to the right to draw two Vitória defenders in, it looks as though the teenager is setting up to shoot with his right. 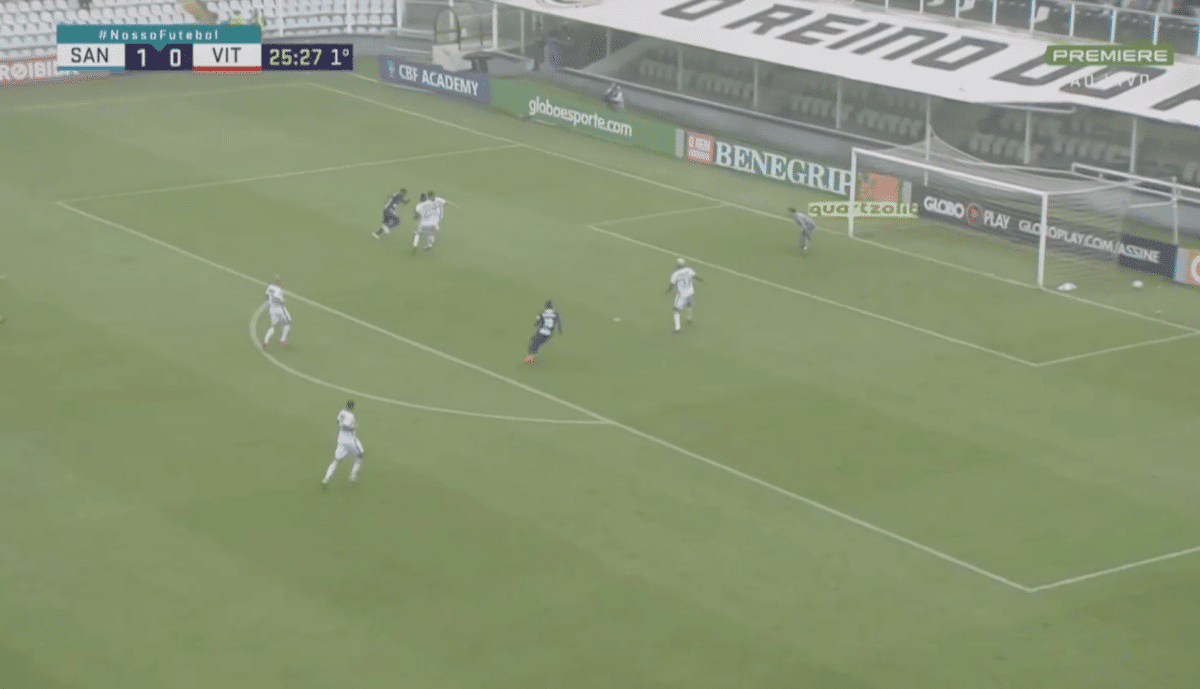 However, he immediately jinks back onto his left and beats both men in an instant, leaving them in his wake before firing the ball past the keeper. 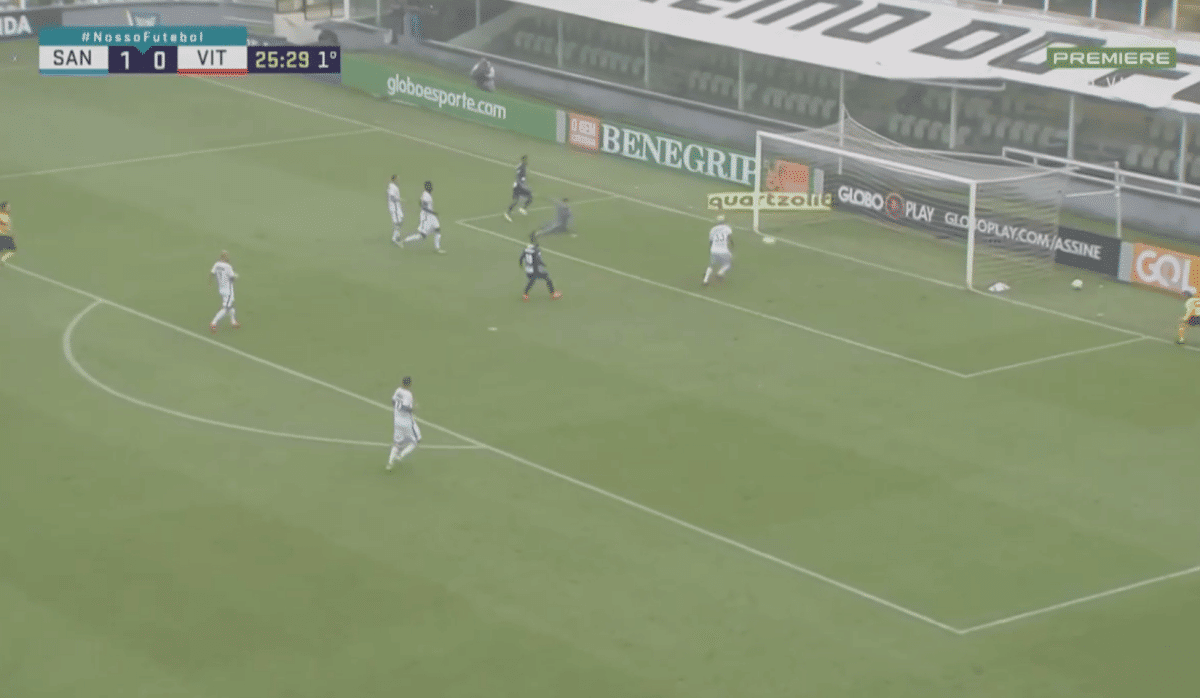 It's just a snapshot of Rodrygo's abilities but the fact that he can slip past players with such agility and poise is impressive at his age.

Of course, moving to Madrid means a significant step-up, one which has proven too much for some in the past.

However, he appears to be an old head on very young shoulders. He has work-rate and dedication to compliment his extravagant technical abilities.

Even that does not guarantee success at the Bernabéu, an unforgiving footballing fortress filled with expectant, entitled fans, many of whom do not consider age when demanding the best.

Much like Vinícius, though, what Rodrygo needs is time. Now 18, there is no rush for him to realise his immense potential. While Real will ultimately want a reward for their investment further down the line, there is an understanding that moving to a club of their stature can daunt even the most seasoned, level-headed footballer.

It may take time to polish Rodrygo's gifts and transform him from YouTube compilations darling to an elite athlete, but when it happens, he is armed with the tools to become an explosive and exhilarating presence on the flank and a torch-bearer for the club's generation of promising young guns.