Getting Christmas gifts for top-level male footballers must be pretty difficult; what do you get a young man who can buy pretty much everything?

Ozan Kabak, an 18-year-old centre-back who’s been linked with both Manchester clubs, received a signed shirt from Virgil van Dijk. It beats socks, we suppose.

Kabak is part of an impressive Turkish generation. Hakan Çalhanoğlu followed in Nuri Şahin and Arda Turan’s midfielder footsteps, while Emre Mor, Cengiz Ünder and Abdülkadir Ömür have given the country promising attacking threats. Now Kabak could be the rock they build their defence on in future.

A product of Galatasaray’s academy, the teenager has broken into the first-team this season. After making just one substitute appearance in the league last year, he’s started 12 of Galatasaray’s 17 league games in 2018/19, along with four in the Champions League.

A whole handful of top European clubs have been watching him turn out in Turkey, amongst them Arsenal, Roma, Inter Milan, Manchester United and Manchester City. They were tempted not just by his talent, but a rumour of his price too, reportedly just £6.7m.

Unsurprisingly, Galatasaray promptly signed the teenager up to a new five-year contract, which appears to have bumped the price up slightly; a deal with Stuttgart has just been agreed for €12m.

It’s remarkable how many defenders struggle to defend well, and Kabak is a defensive-first player in an age of ball-playing centre-halves.

In the below instance, for example, Kabak stays steady as the attacker throws a dummy, trying to tempt the defender into committing to the outside so that a channel to cut inside opens up. 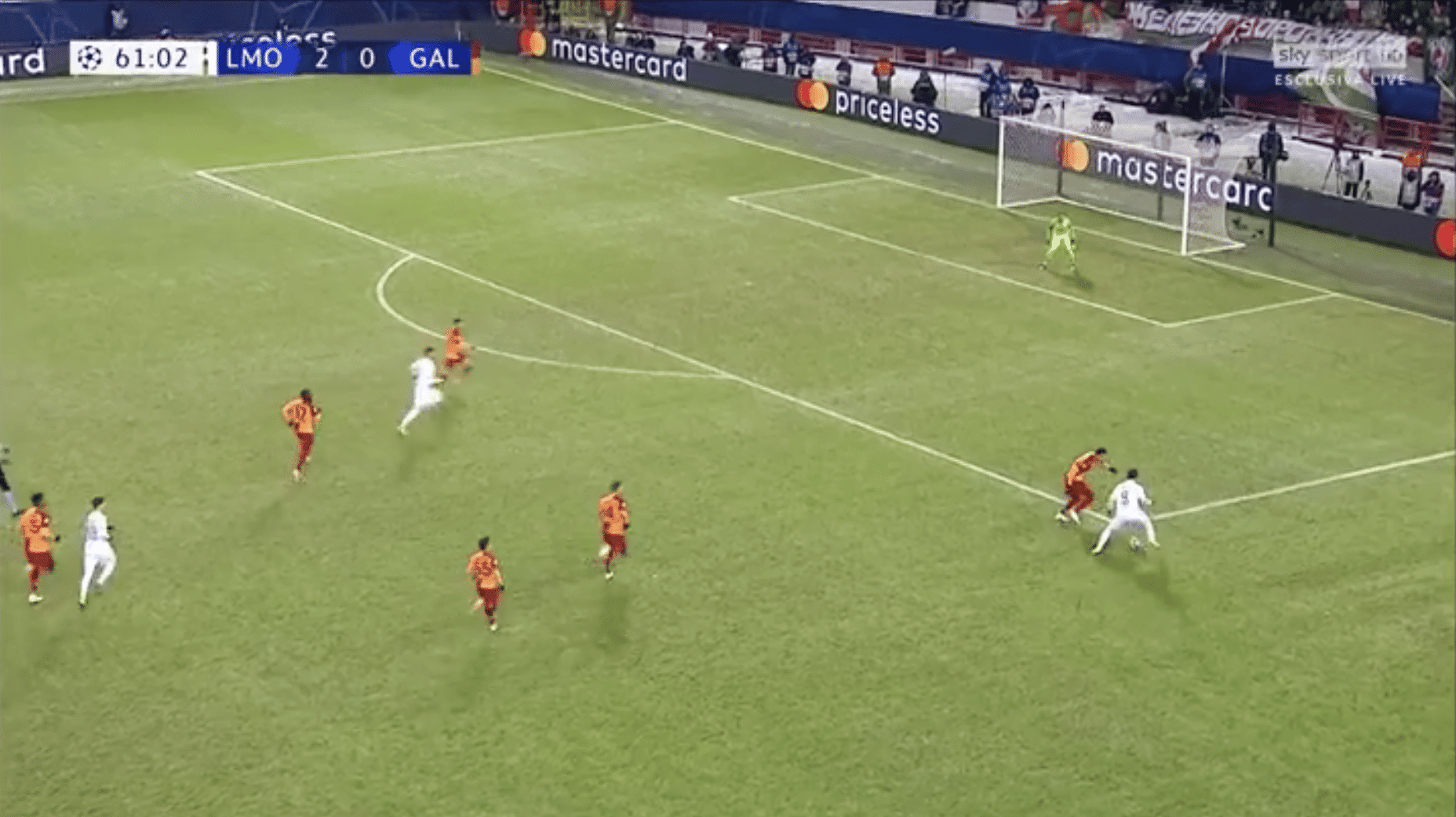 Remaining in a good, crouched, angled body position, showing the attacker down the line, means that Kabak is ready to react when his opponent tries a burst of pace.

He reads the movement at the start of the burst and, even though he’s naturally a little slower than the Limoges player, he’s able to match the movement step for step. 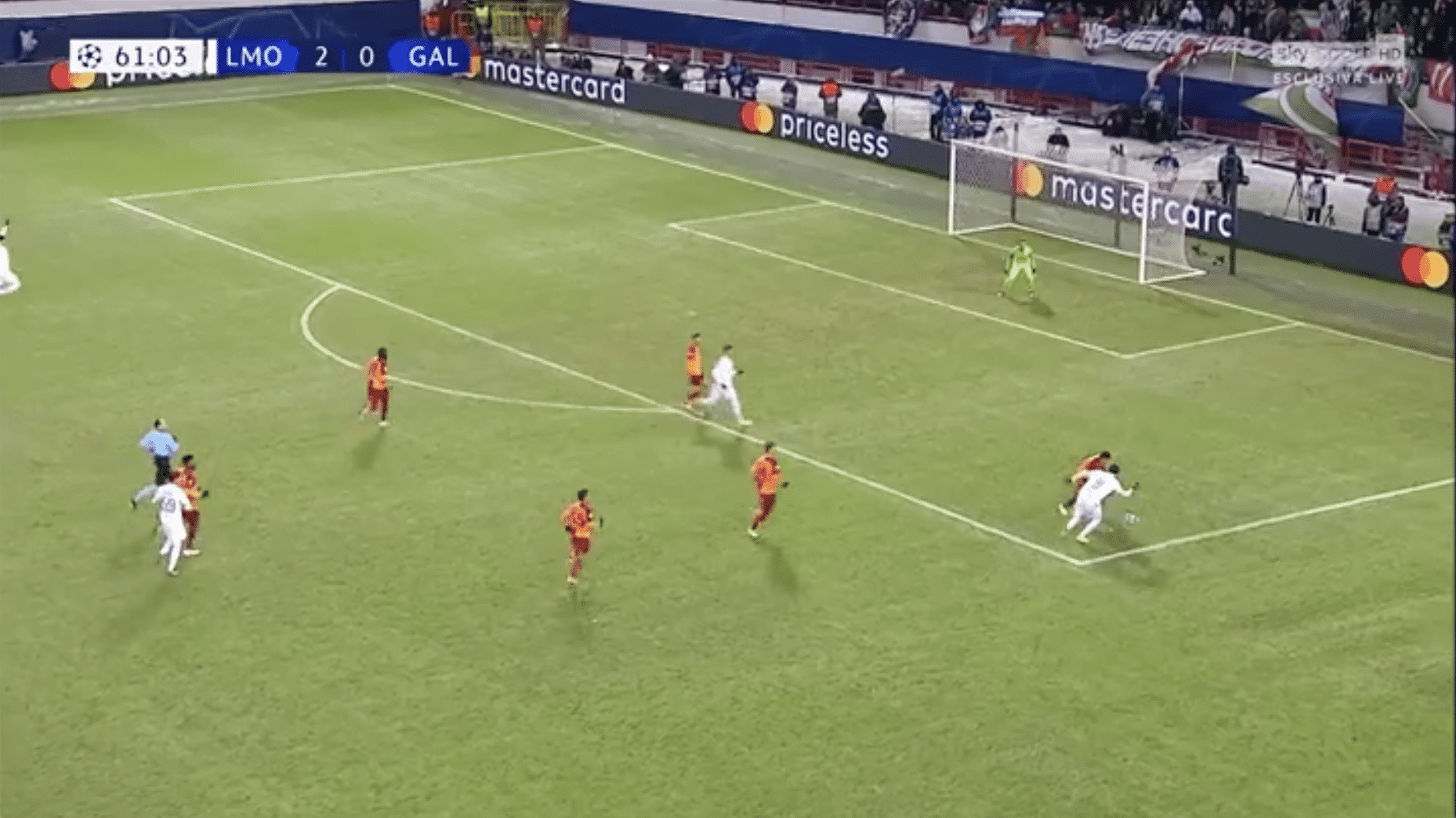 Because of this steady defending and reading of his opponent, Kabak is able to poke away the ball quite easily. 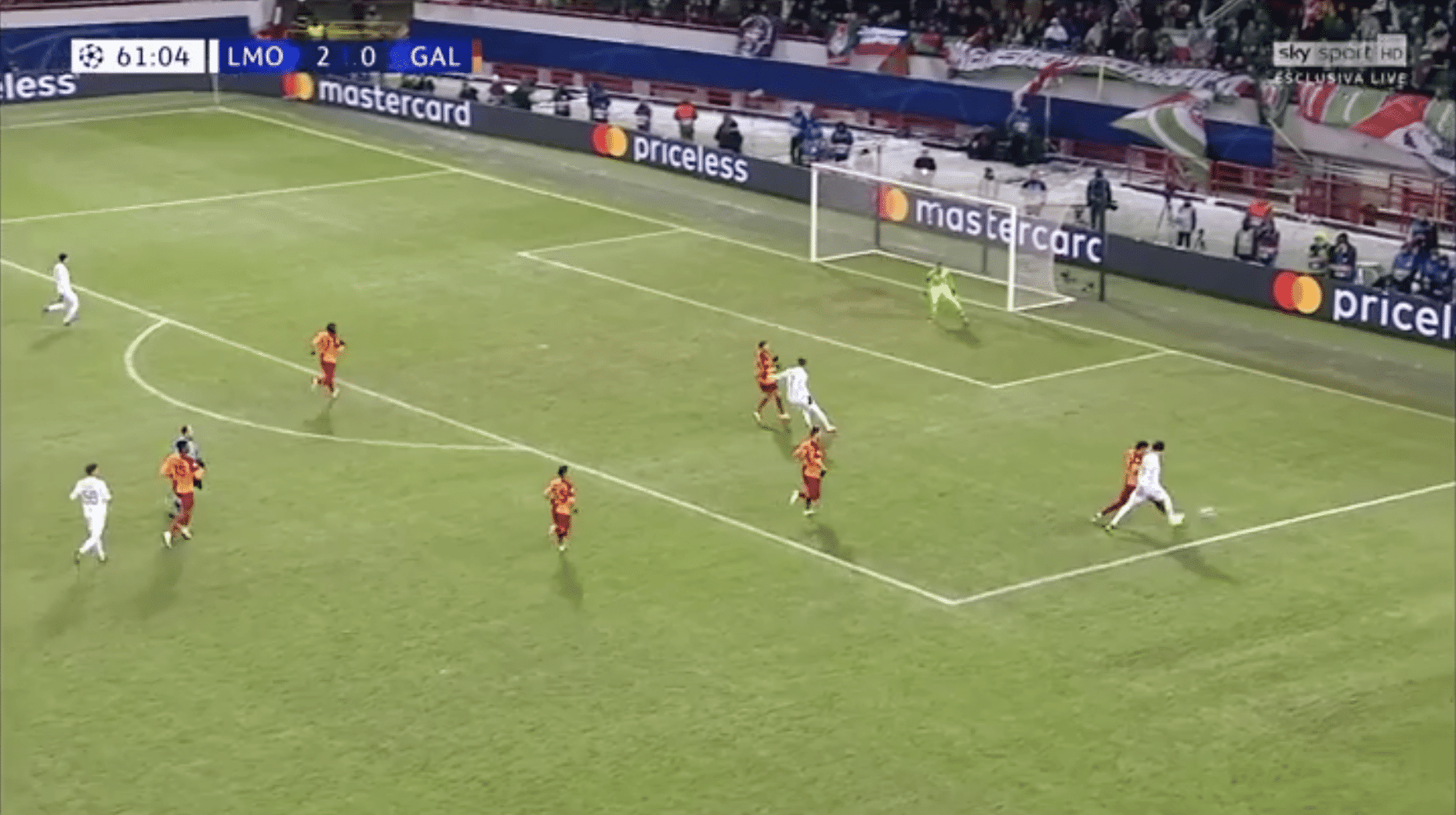 Kabak is also partial to a tackle, and although his youthful exuberance means that he doesn’t always pick his moments well, his judgement on the timing of each tackle is usually good.

The following are examples of both things. Early on in a Champions League game against Porto, Kabak has noticed a striker dropping into space and is storming forwards to pressure him when he receives the ball. 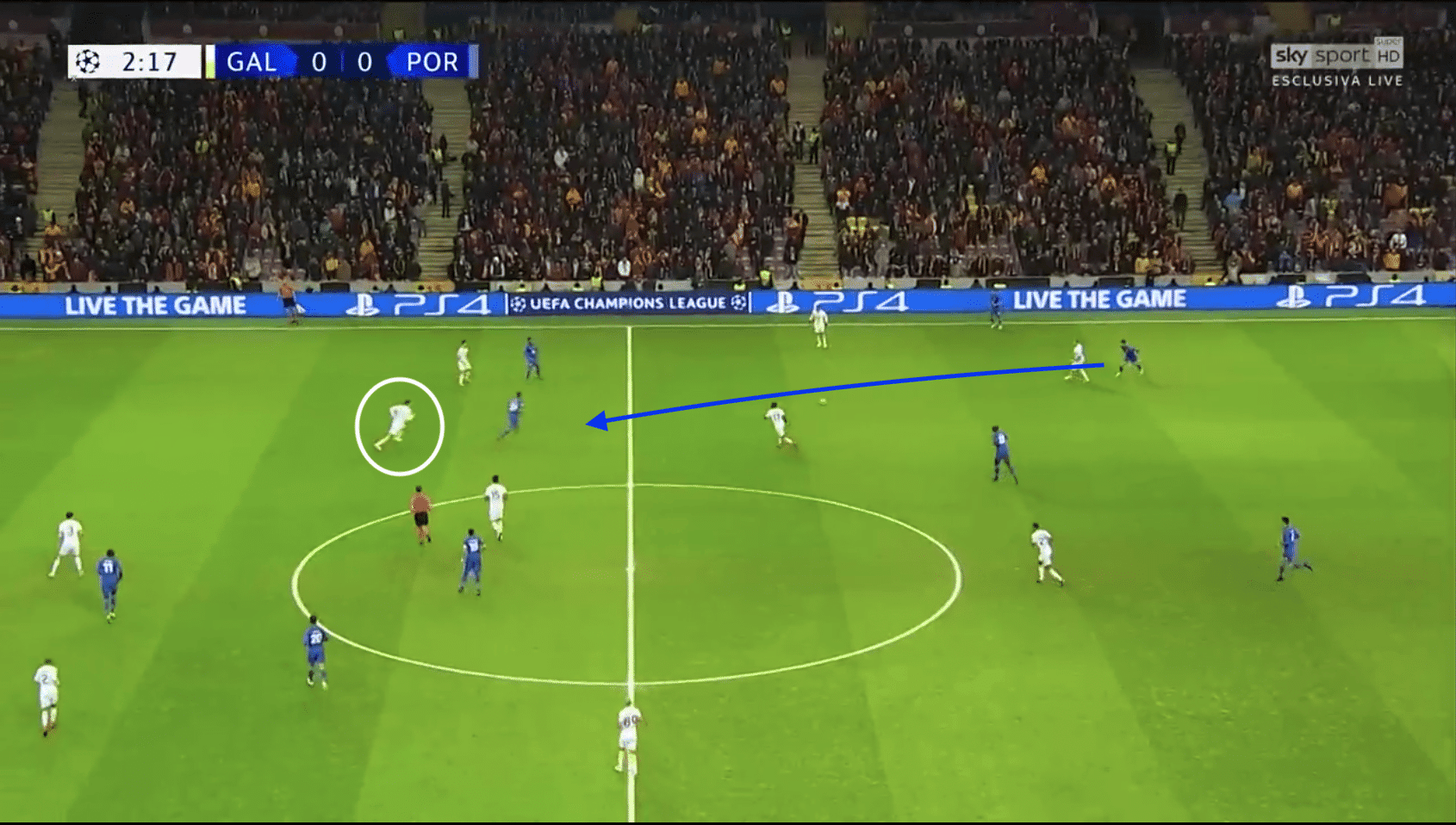 Kabak makes up a lot of ground in not much time but still manages to take in the situation and see an opportunity to intercept the ball. The forward, having slightly turned, had opened up a path for the defender to make a tackle. 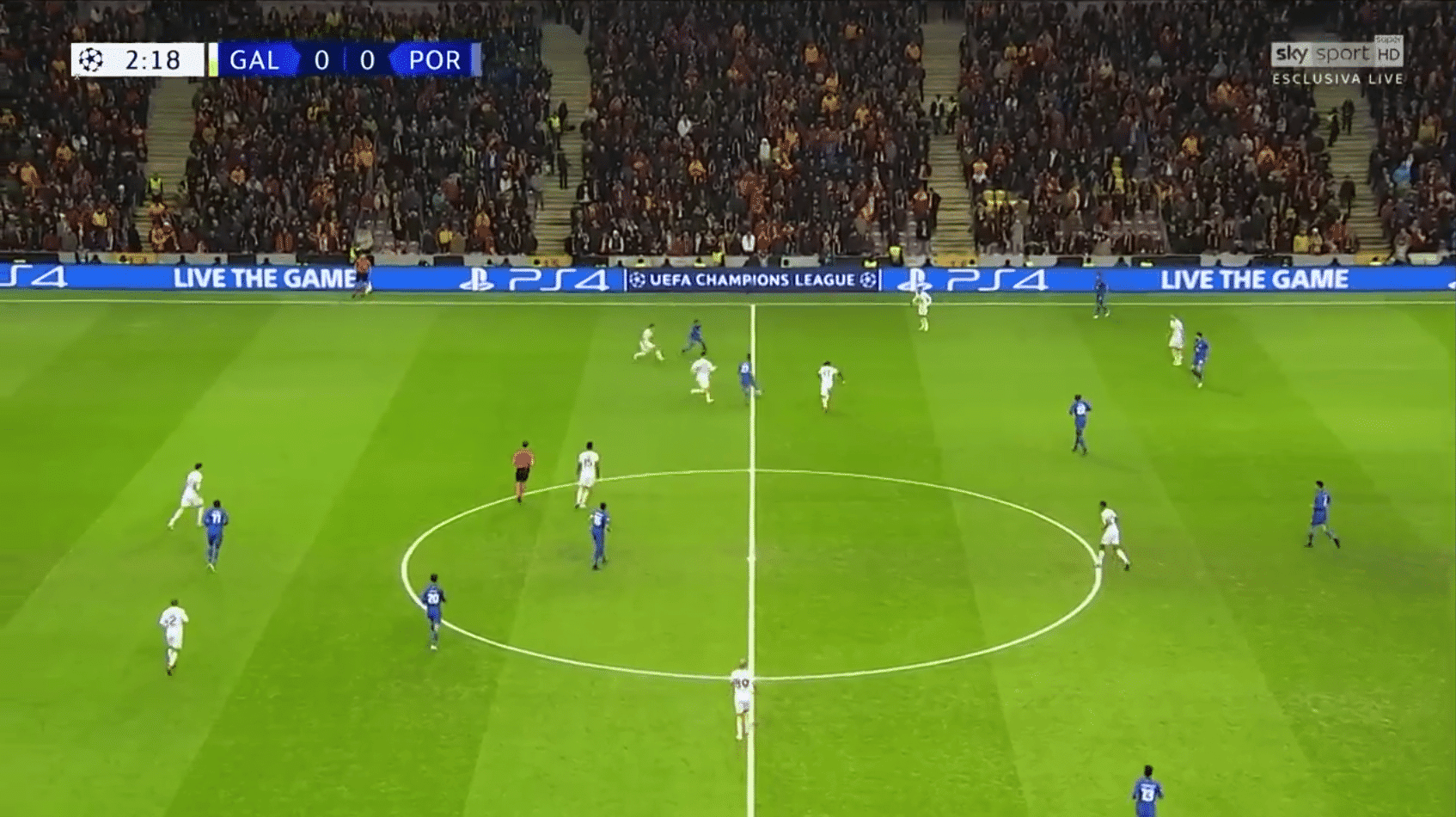 Kabak slides in and cleanly wins possession. The still images don’t do justice to just how much speed the teenager was travelling to make the tackle. It’s a risky challenge, in that it could easily have turned into a foul, but having committed to it he executed it well. 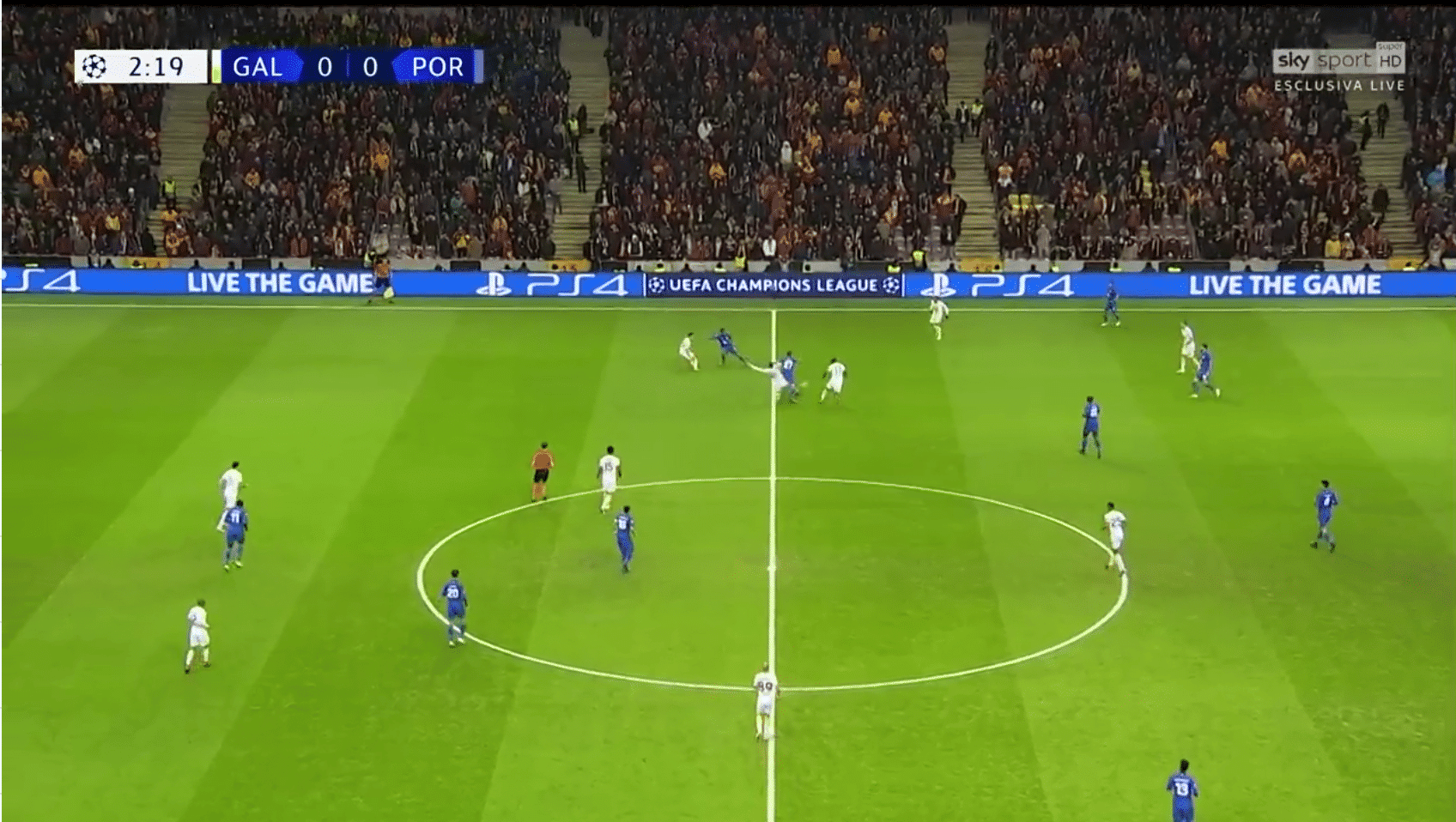 The fact that he’s so mature in one-on-one situations is a promising sign as far as his tackle judgement goes as well. He’s clearly learned to bide his time and pick his moments in one area of the game; he should be able to learn to do so in another as well.

That’s not to say that being an aggressive-minded defender is a bad thing. One of the teams linked to him, Manchester United, is in dire need of a centre-back who knows how to operate in the areas just ahead of the back-line.

For an 18-year-old, there’s a surprising physicality about Kabak. Unlike many teenagers, he already looks like a physically developed man, rather than someone who still needs to grow into himself, either through bulking out or coming to terms with his bulk. He’s big, but not in a lumbering way; strong, but not in a ‘has spent too much time in the gym to impress girls’ way.

The clubs who were interested in him at Galatasaray will be watching him closely as he makes his first steps in Germany.

The step up to a more competitive league, playing better opposition week-in, week-out will be a great test of where he’s at at the moment and where he’s likely to progress to. Who knows where he could be by this time in 2020.