Almost a year ago, centre-back Jules Koundé was catching the eyes of scouts for the first time as a 19-year-old getting a run in Bordeaux’s first-team.

It was just three months he signed his first professional contract… although he looked as if it had only been three months since he started secondary school.

Despite his youthful appearance, the young French defender has become an almost permanent fixture in Bordeaux’s starting line-up. And if you want something to help soothe you and calm you into a gentle slumber, put on a compilation of Koundé’s long passes.

Ligue 1 teams are unwise but will, presumably, eventually learn, that give the youngster a lot of time and space on the ball and he can stroke it to pretty much anywhere on the pitch.

He demonstrated this against Marseille earlier in the campaign; without being put under any pressure, the teenage defender is able to hit a cross-field pass which instantly starts a threatening attack. 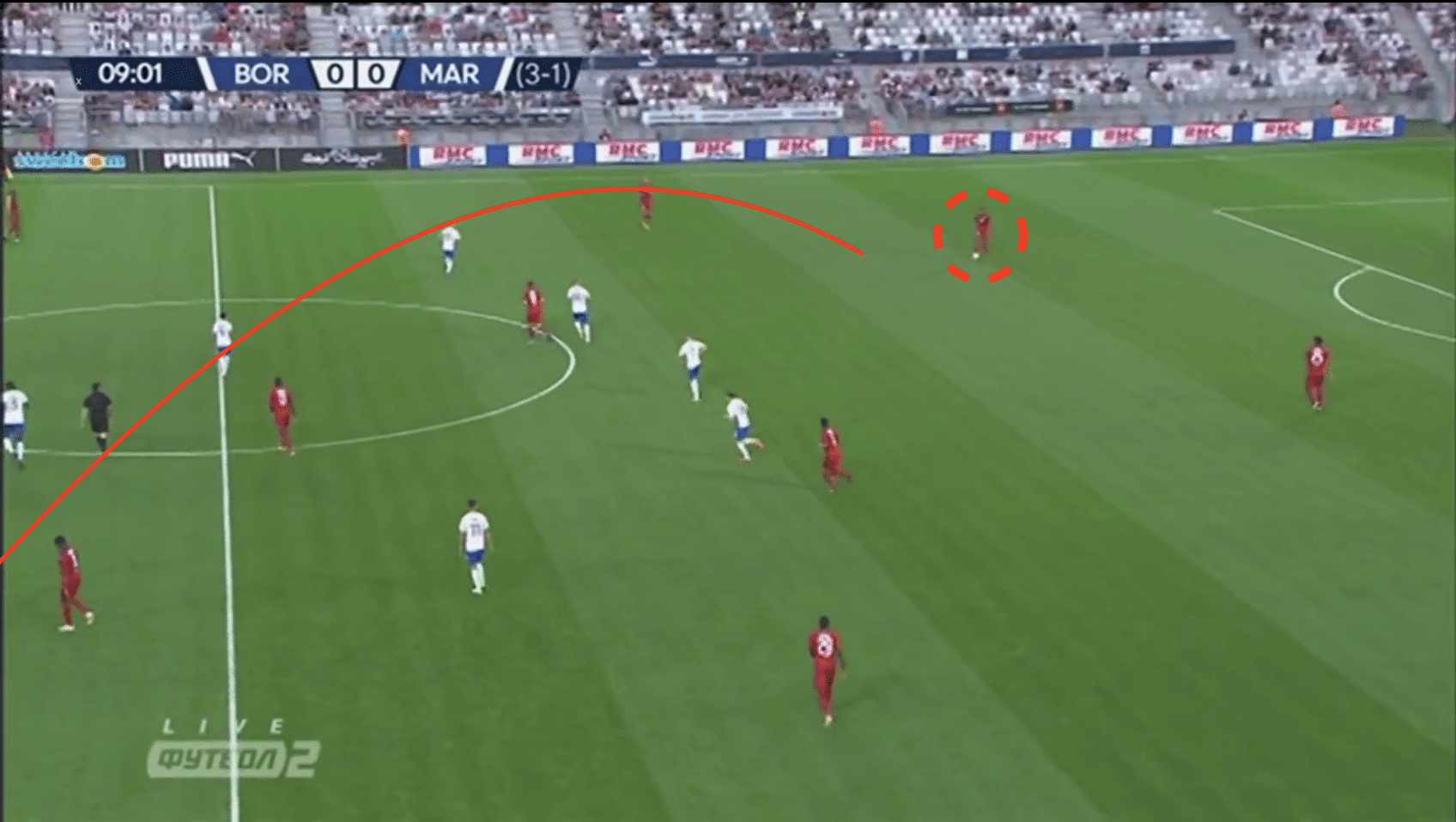 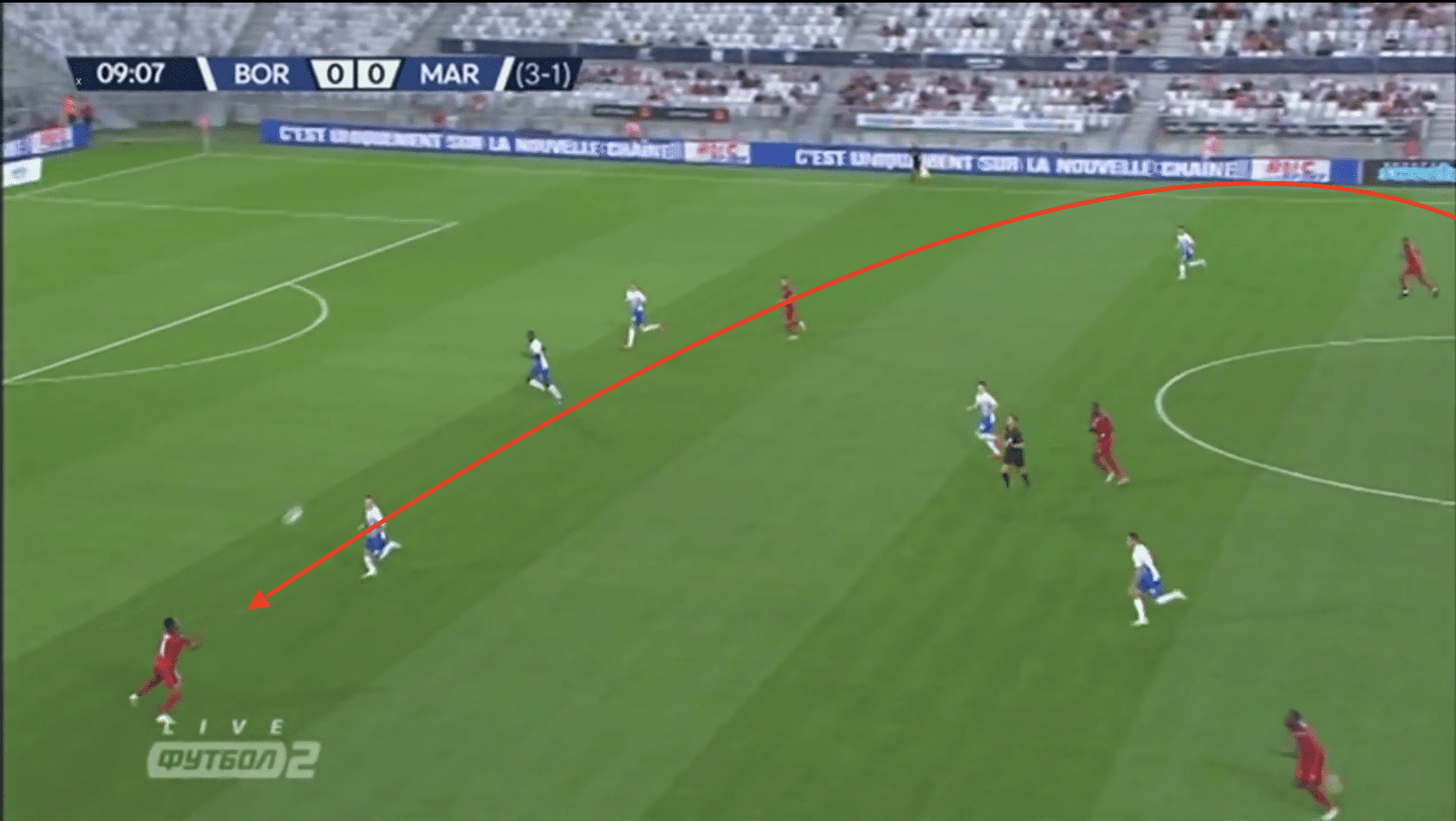 It’s actually surprising that Koundé has such range on him considering that he’s such a small and slight individual.

And while the speed and trajectory of these passes tend to be a little slow and almost feathery, they should be able to flatten out and speed up as he bulks up a bit.

He has the ability to disguise passes reasonably well. In the below example, he gave the full-back the eyes, hinting that he’d play the safe pass to the wing, before playing an incisive ball into the gap between the defenders for his teammate to run onto. 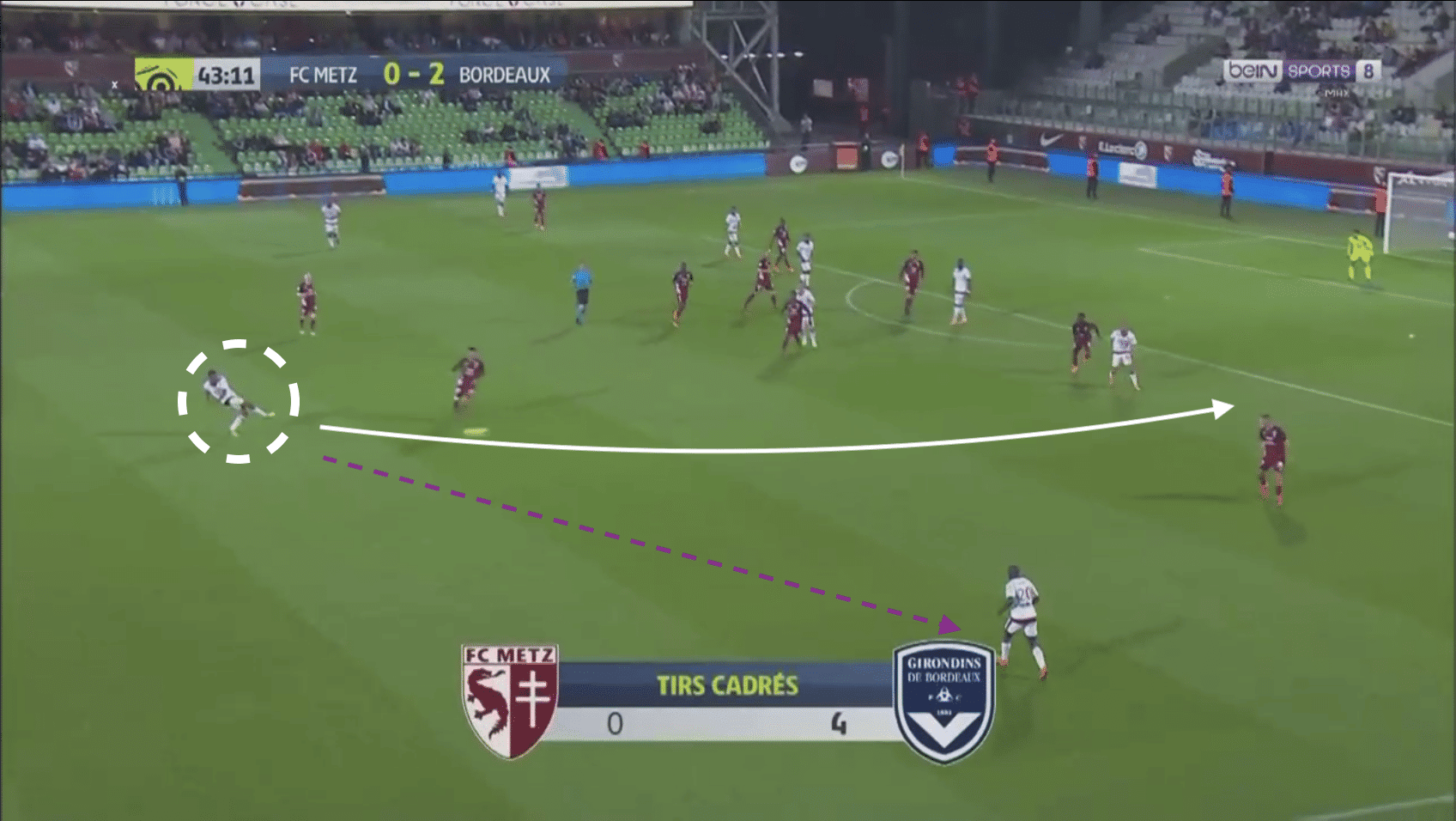 However, we shouldn’t hype him up too much, too soon as some kind of Toby Alderweireld heir apparent.

There are occasions when it appears as if Koundé doesn’t quite see the runs of his attackers in time, meaning that there are some opportunities he doesn’t exploit.

In the below images, there’s a striker making a run behind the defence, and he has made a lot of effort to bend his run to avoid being caught offside. 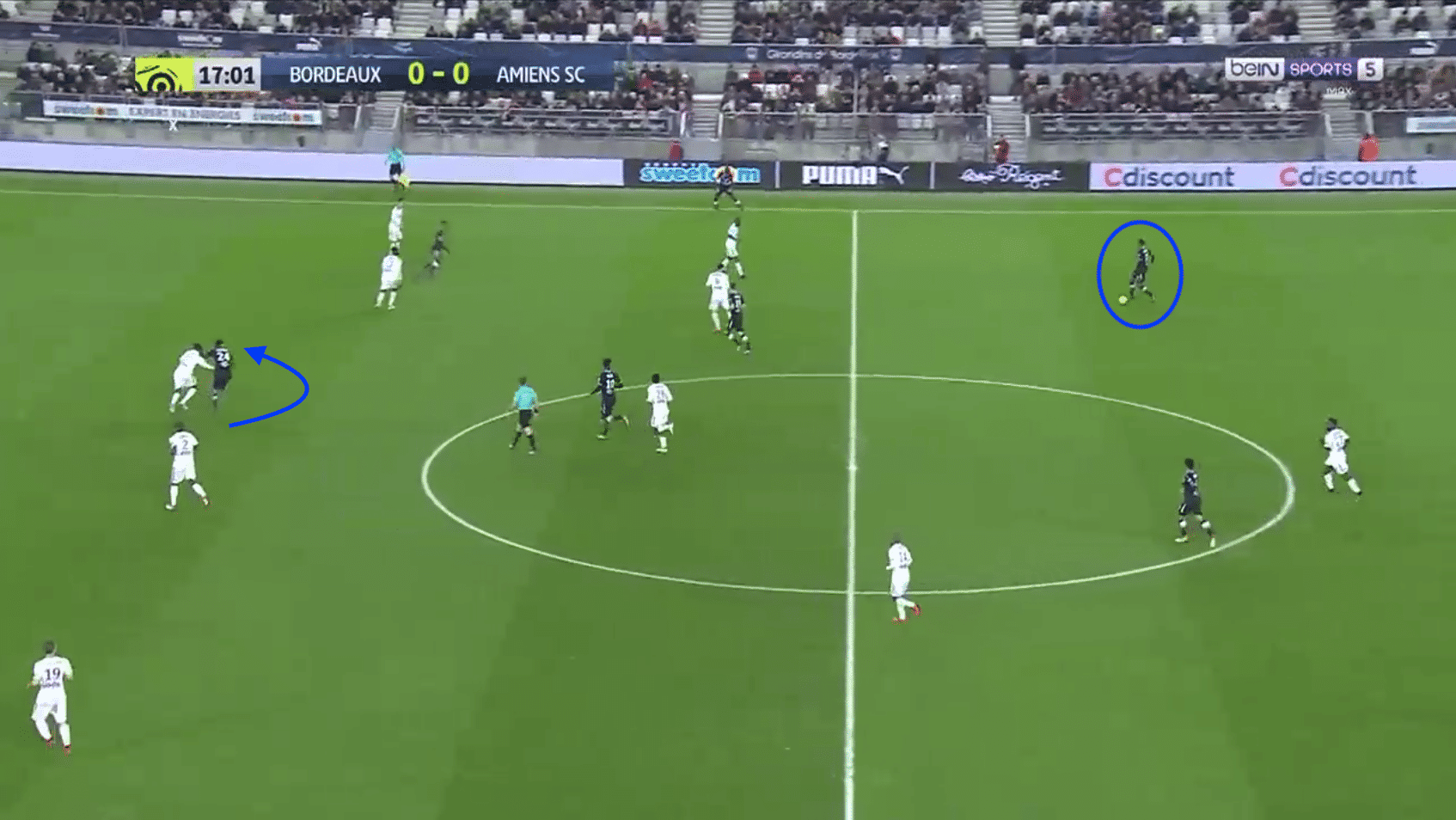 Koundé doesn’t see it. Fortunately for him, one of Bordeaux’s midfielders spots the chance to make a run, and it’s this one that the 20-year-old centre-back notices.

The pass he plays is nice, however, it’s a little lucky that he had this secondary run to play a pass to at all. 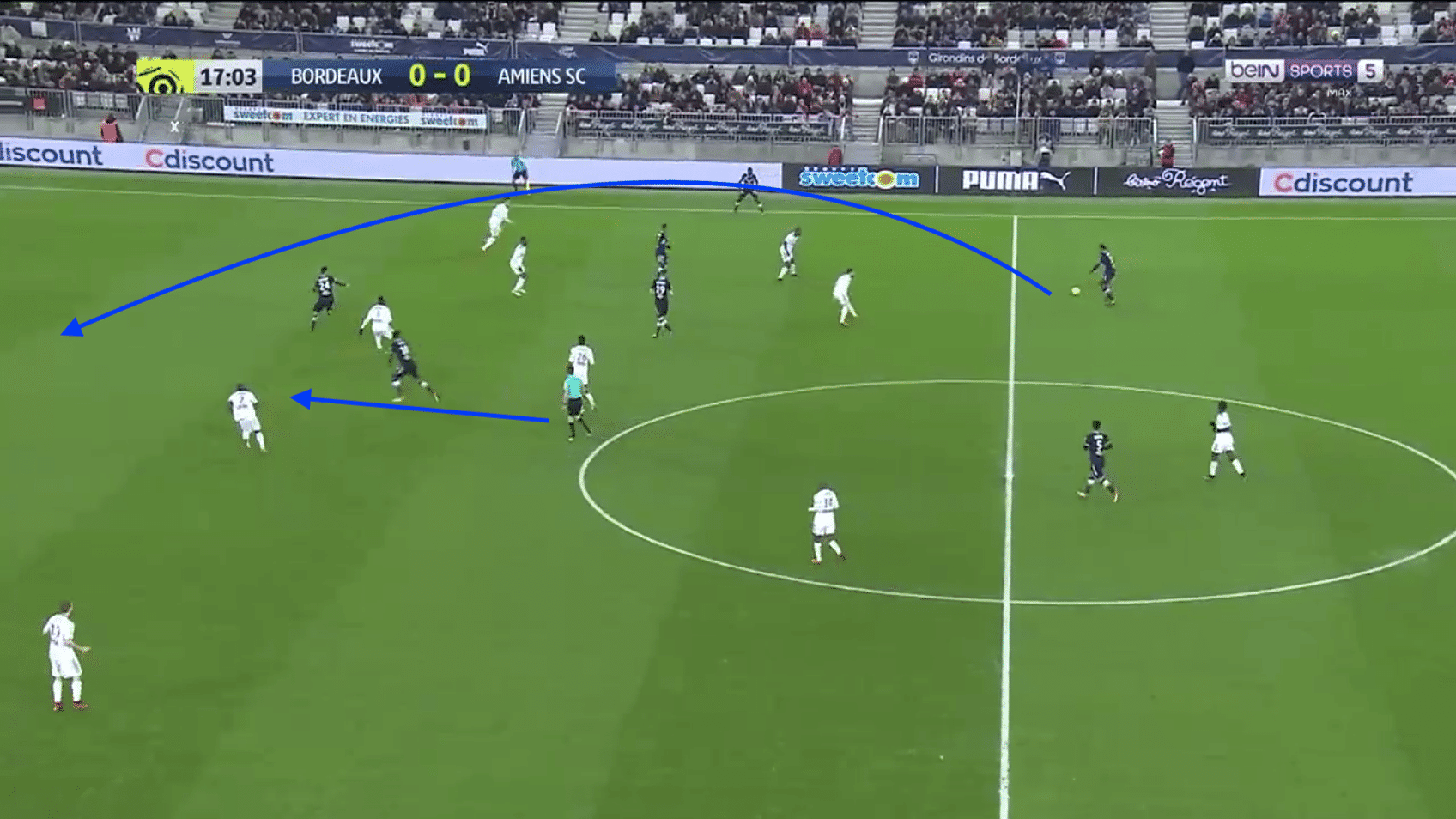 There are weaknesses, though. As referenced multiple times, Koundé is quite small for a centre-back. According to Wyscout, he’s 5ft 10ins and 11 stone, which would be about average height and weight for a normal person, but not a professional athlete.

He doesn’t see it as a particular issue, though.

“Growing up, it was often said to me that my size could be a problem for managers. I always tried to compensate with my technique, with how I play out from the back, it’s very important,” he said shortly after breaking into the Bordeaux first-team.

“It’s true that sometimes at my height you can’t always challenge in aerial duels but you can always manage the opponent. I’ve always had good timing, I like aerial duels and I jump relatively high, so that really helps. But my small size has never been a problem for me.”

Koundé is absolutely right that size shouldn’t be the be-all and end-all for central defenders, and it’s not really size that’s holding him back. It’s just solid defensive sense that’s missing.

He often seems to mistime tackles and his problem when defending one-on-one against forwards is more one of presence, rather than strength.

It’s small margins but he doesn’t quite seem to step up at the right times; just slightly late to get close to the forward or not choosing the right times to drop off again.

It could be something that comes as he grows into his body. Young players can have little co-ordination imperfections that they mature out of as they find the body type that suits best for them.

For attacking players, this generally isn’t a problem, because speed and confidence are their big assets. But for defenders, the minute imperfections in footwork and balance matter a lot more.

Earlier this month, Koundé signed a contract extension, that ties him to the club until 2023. With his talent on the ball, it wouldn’t be a surprise if he was snapped up by a bigger club before then.

He needs to improve defensively but the fact that he’s been a consistent starter for Bordeaux for a calendar year is a sign that he is, at least, good enough to be trusted. And, at 20, that’s awfully promising.