Just ten days after he made his senior debut for Flamengo in May 2017, aged just 16, it was announced that Real Madrid had agreed a £38million deal to sign Vinícius Júnior, making the youngster the most expensive 18-year-old in history when he eventually transferred to the Santiago Bernabéu in July 2018.

It was a situation every aspiring young footballer dreams of, joining the world's biggest club in a headline-grabbing deal, but it also meant the teenager's billing was close to impossible to live up to, long before he even arrived in the Spanish capital.

Yet, just half a season into his Madrid career, still six months short of his 19th birthday, Vinícius is exceeding expectations.

The initial plan had been to loan Vinícius back to Flamengo, with whom he'd become a star player in little over a year in the first team, to close out the remainder of the 2018 Brazilian season and clock further senior experience.

However, it was determined Vinícius should stay with Madrid upon the completion of his transfer last summer and he was placed in the club's Castilla second string, turning out in the Segunda B division.

Vinícius soon proved himself to have outgrown that level, though, scoring four goals in five appearances, and he has become increasingly key at first-team level as the season has worn on.

Handed a debut in late September, a two-minute cameo in a 0-0 draw with rivals Atlético Madrid, Vinícius' first-team exposure gradually increased as 2018 drew to a close. He played ten minutes the following week in a 1-0 defeat to Deportivo Alavés – his last appearance under former boss Julen Lopetegui – before his breakout performance a month later.

Were it not for a red card with the Castilla preventing his participation, Vinícius would have been included in Madrid's squad at they travelled to the Camp Nou for their first Clásico of the season on October 20. The club appealed the league's decision to uphold the suspension, but it was probably for the best that he could not play, as the teenager did not need to be tarnished by the 5-1 thumping Barcelona doled out, the final nail in Lopetegui's coffin.

Indeed, it has been suggested that Lopetegui's refusal to utilise Vinícius more often was one of the main reasons club president Florentino Pérez lost patience with the former Spain manager, with many within the Madrid hierarchy feeling the 18-year-old was ripe for a more prominent role; through no fault of his own, the young attacker had become a pawn in the 13-time European champions' never-ending intra-club politics.

Instead, Vinícius' next outing, and his first under new manager Santiago Solari, was a rescue mission, brought off the bench with 17 minutes to play as Madrid toiled to break the deadlock against Real Valladolid at the Bernabéu.

Vinícius' introduction provided the catalyst for a much-needed victory. Stationed on the left flank, the Brazilian provided thrust from deep, carrying the ball forward at speed to turn defence into attack, and tormented Valladolid in the attacking third with his dribbling and impressive link play.

It was during this brief appearance Vinícius netted – albeit dubiously – his first and thus far only La Liga goal, his cross, which was heading closer to the corner flag than the goal, deflected in to put Madrid 1-0, before a late Sergio Ramos penalty sealed the three points. According to Marca, it was his performance in this game that earned Vinícius the respect of his team-mates, who from this point on have regarded the rookie as an equal, a bona fide first-teamer. 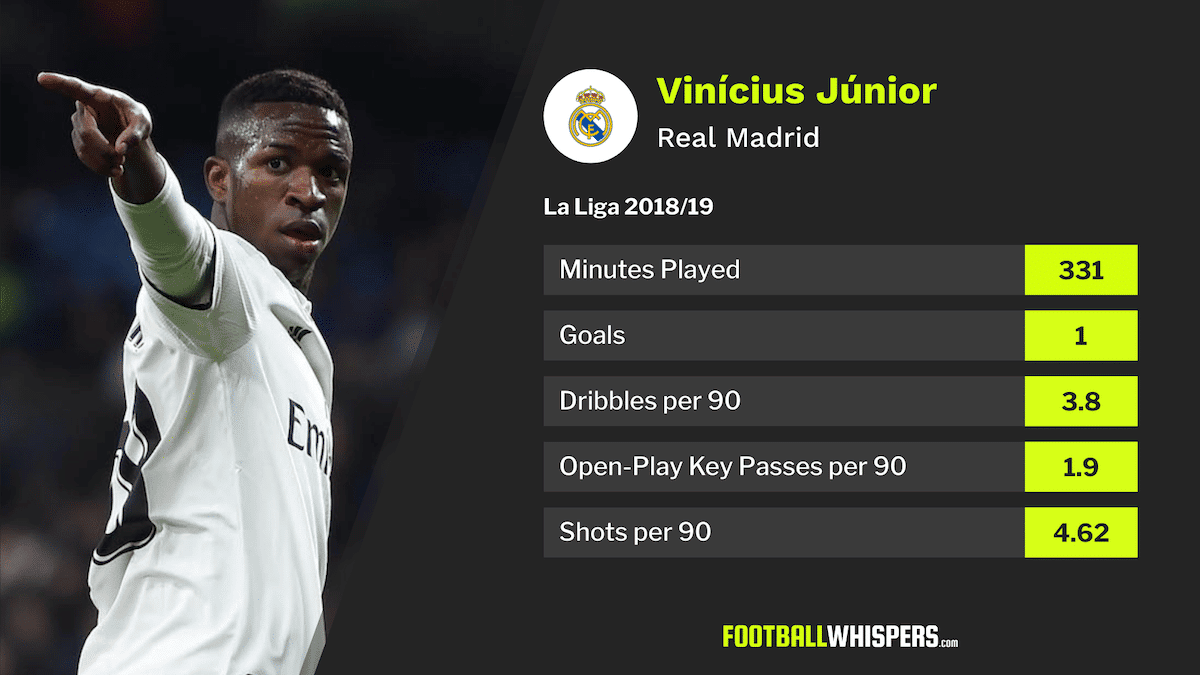 Vinícius made six more senior appearances before the winter break, including a start against Victoria Plzen in the Champions League, but the resumption of La Liga action in January accelerated the Brazil under-20 star's rise up the pecking order.

Injuries to Gareth Bale and Marco Asensio have meant Vinícius started five games in the space of 13 days, from January 6 to 19, completing the full 90 minutes four times. A second senior goal arrived in the 3-0 Copa del Rey last-16 first-leg victory over Leganés, and the winger has so impressed that there is a growing feeling among Madrid fans and media that he should be allowed to keep his place in the side even when Bale and Asensio return.

“The strength of Real Madrid is always in the group,” Solari said recently, quick to quash talk of 18-year-old Vinícius having already become his team's most important player.

“All of our players are important. It is true that bringing new players into a squad which has won three Champions Leagues is also part of our job. A kid of 18 has arrived and is doing very well.”

Stylistically, Vinícius' blend of showmanship and efficacy appears the perfect fit for Madrid, a club for whom success is an expectation and style is not to be compromised.

Comfortable as a second striker or stationed wide on the left flank, Vinícius has the kind of speed, skill and close control that terrifies defenders, evidenced by his impressive 3.8 successful dribbles per 90 minutes so far in La Liga.

But he has also displayed an encouraging maturity, in both his willingness to take responsibility for his team's creativity and in his decision-making all over the pitch. He has the self-confidence to seek possession at all times, yet also the humility and awareness to know when and where to employ his dribbling techniques, and in which areas to attempt to split asunder the opposition.

The price tag, the comparisons to Neymar, playing in front of 85,000 expectant fans for the biggest and most historically successful club on the planet – none of it daunts this unique 18-year-old. There is a heavy weight of expectation on Vinícius' slender shoulders, but you wouldn't know it.