English youth football exploded into life 2017, with Young Lions victories at the FIFA U-17 and U-20 World Cups sparking renewed interest in the nation's emerging talents, pointing to a bright future for England at senior level.

Of England's newly crowned youth champions, none shone brighter and garnered more giddy hype than Manchester City‘s Phil Foden. The midfielder was outstanding at the under-17 tournament in India, awarded the Golden Ball (previous winners include Diego Maradona, Lionel Messi and Paul Pogba), naming him the best player on show at the competition.

England's victory was sealed by a 5-2 thumping of Spain in the final, in which Foden scored twice. Picked out both times by Chelsea‘s Callum Hudson-Odoi, the City star showed a proclivity for breaking forward from his midfield station to score assuredly.

But it was Foden's ability to control games, authoritatively dictating play and slicing defences open almost at will – as he did so expertly with a cleverly disguised through-ball in the lead-up to England's second strike against Spain – that most impressed throughout the tournament.

Ahead of the trophy presentation, England's young stars turned their shirts back to front, putting name and number in full view on their chest. His performances in India, though, ensured that no one was forgetting Foden's name any time soon. 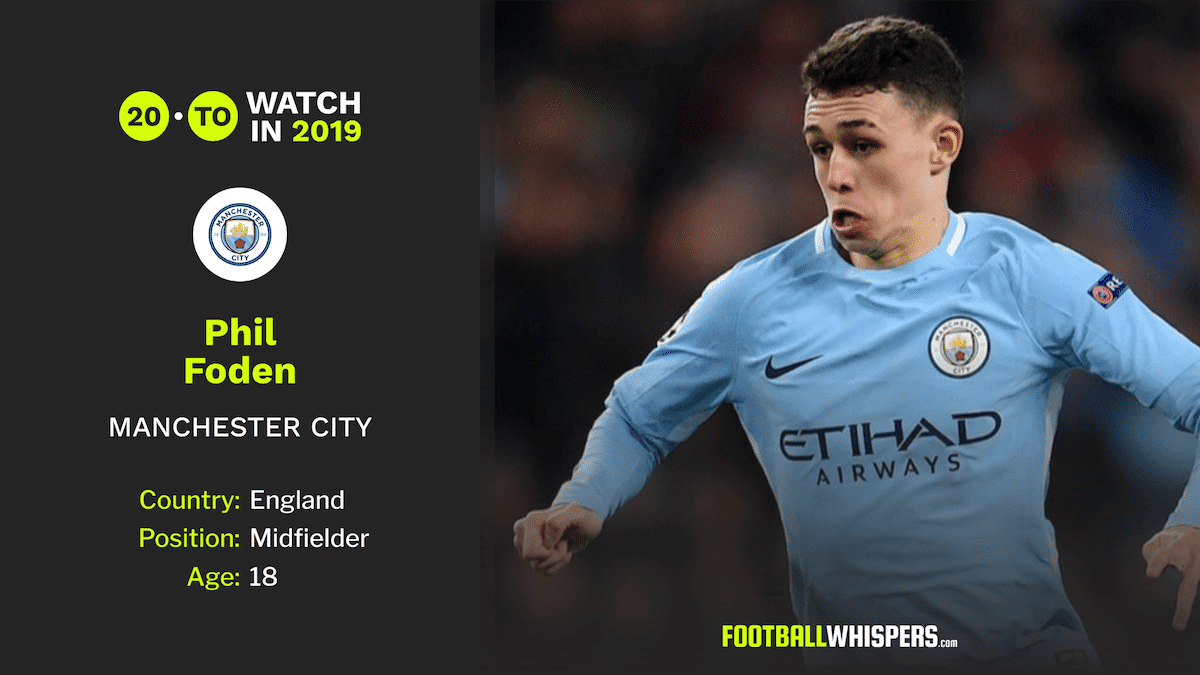 Playing time has been hard to come by for Foden in the senior ranks at the Etihad, where City boast one of the most expensive and talent-rich squads ever assembled. But any thoughts of a move elsewhere for the 18-year-old – who is close friends with Jadon Sancho, the supremely gifted winger of the same age who left City for Borussia Dortmund – should be tempered by the fact that there is no better tutor for the young playmaker than Pep Guardiola.

Generous juxtapositions have seen Foden likened to Spain and Barcelona great Andrés Iniesta. While such proclamations set an impossibly high bar for the Englishman, as Iniesta won every possible honour at club and international level and is one of the finest midfielders ever to kick a ball, stylistic similarities abound.

Of diminutive build and most at home either side of a deeper pivot in a midfield three, Foden, like Iniesta, thrives with freedom to roam the pitch, picking up pockets of space and linking slickly with colleagues.

He also shares the Spaniard's quick feet, love of a through-ball and ability to receive the ball under pressure and turn out of tight spaces.

Having shaped arguably the greatest club side ever seen while in charge of Barcelona between 2008 and 2012, with Iniesta one of its key components, there is no coach in world football better placed than Guardiola to fully utilise the myriad gifts Foden possess.

Those gifts have, thus far, been seen only in fleeting glimpses at first-team level, however. At the time of writing, Foden has made eight Premier League appearances in 2018/19, but those outings amount to a miserly total of just 93 minutes, with his Champions League game time roughly matching that figure.

He did, though, start for City against Chelsea in the Community Shield at Wembley Stadium in August, playing 76 minutes and showing exactly why his future is so bright.

At youth level with City and England, Foden tends to take responsibility for dictating the tempo of his side's play, getting on the ball as much as possible and often dropping deep to collect possession from the backline to begin attacking moves from deep.

With the City first team, his role is different. Instead of having the freedom of the entire middle third, he is more of a supplementary piece to the Premier League champions' line-up. As one of the attack-minded central midfielders in a 4-3-3, his main concern is finding space between the lines, linking play and making penetrative runs or passes into the final third. 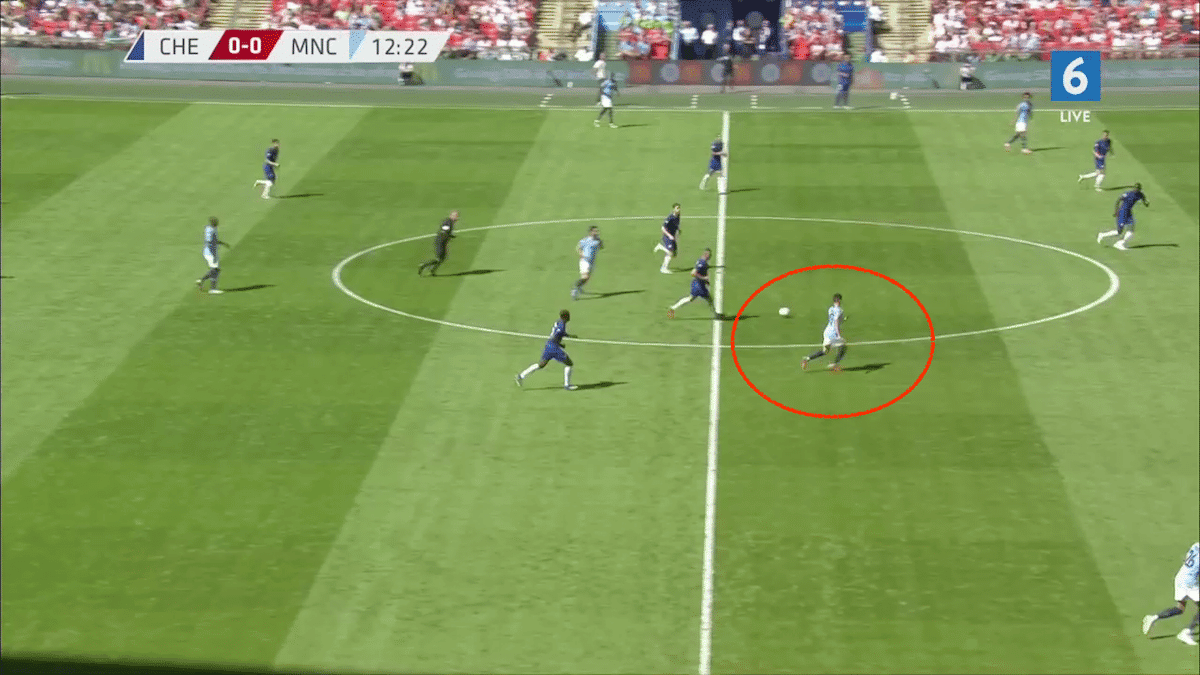 Above, we see Foden doing just that. He has expertly ghosted into an area of open space between Chelsea's lines of midfield and defence, receiving the ball and immediately looking to take his team forward. 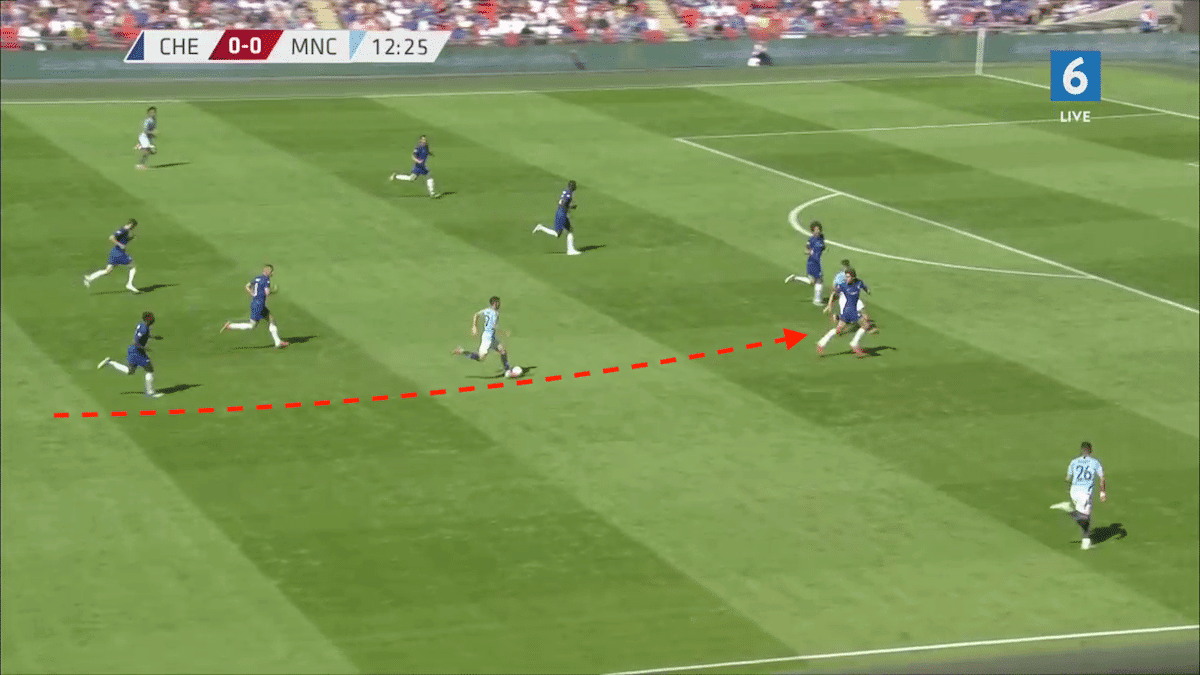 He does so via an ambitious and direct run at the centre of the Blues' rearguard, forcing Chelsea backwards, running towards their own goal. 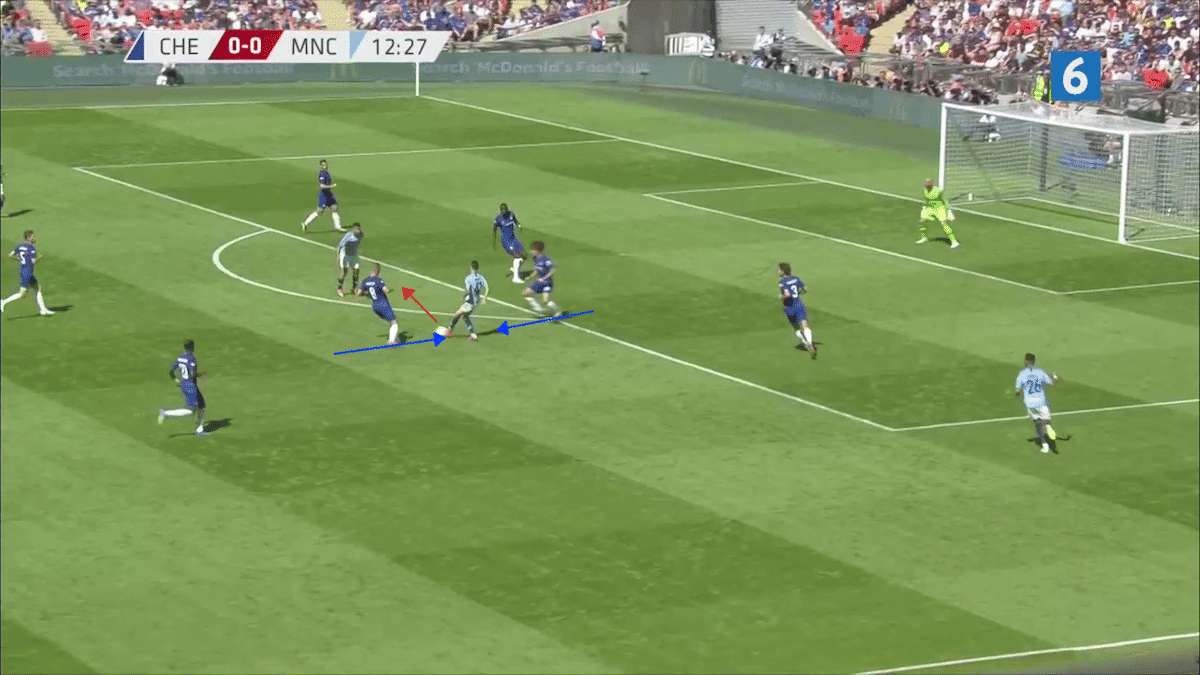 Then, when he reaches the edge of the penalty area, he exercises what in Spanish football parlance is referred to as pausa, instinctively delaying for a split-second so as to draw in two opponents, thus creating a yard of space for Sergio Agüero. Foden then slips a simple pass to the Argentinian who scores from 18 yards.

This time we see Foden carving Chelsea asunder through his visions and passing, turning what the Blues would have considered a controlled situation into a goal threat in mere seconds. 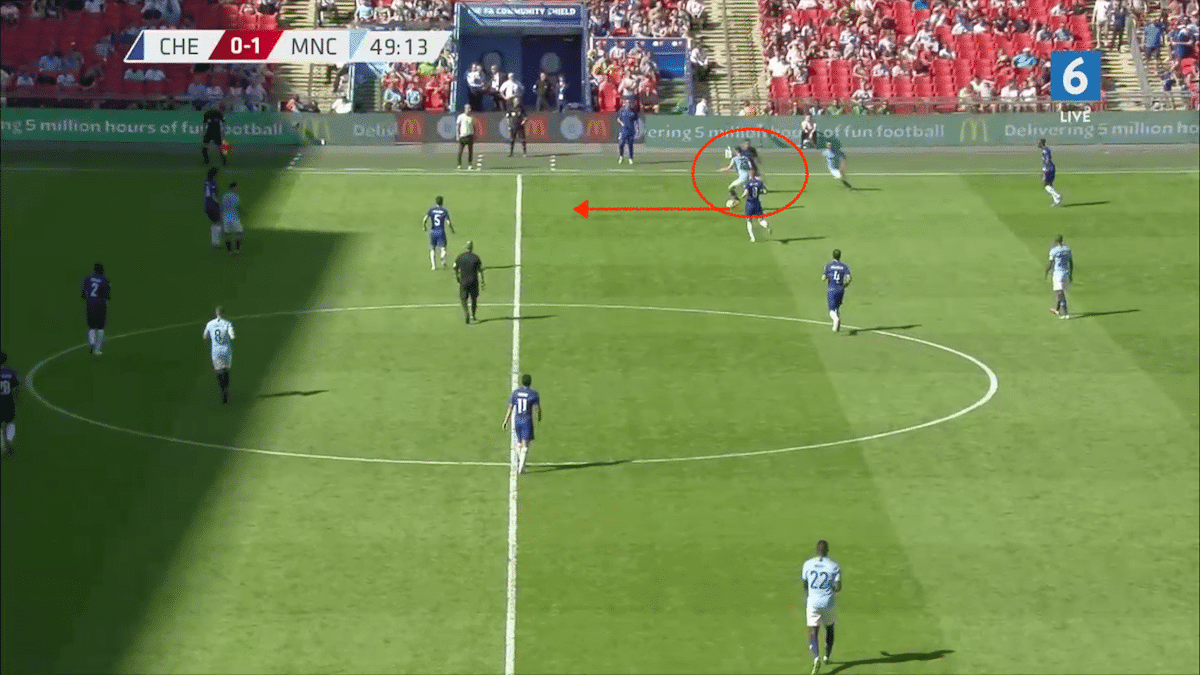 Collecting a pass just inside his own half, Foden's open body position – something Guardiola was famously captured coaching Raheem Sterling on in a City training session – allows him to instantly play towards the Chelsea goal, with his first touch taking him away from his two nearest opponents. 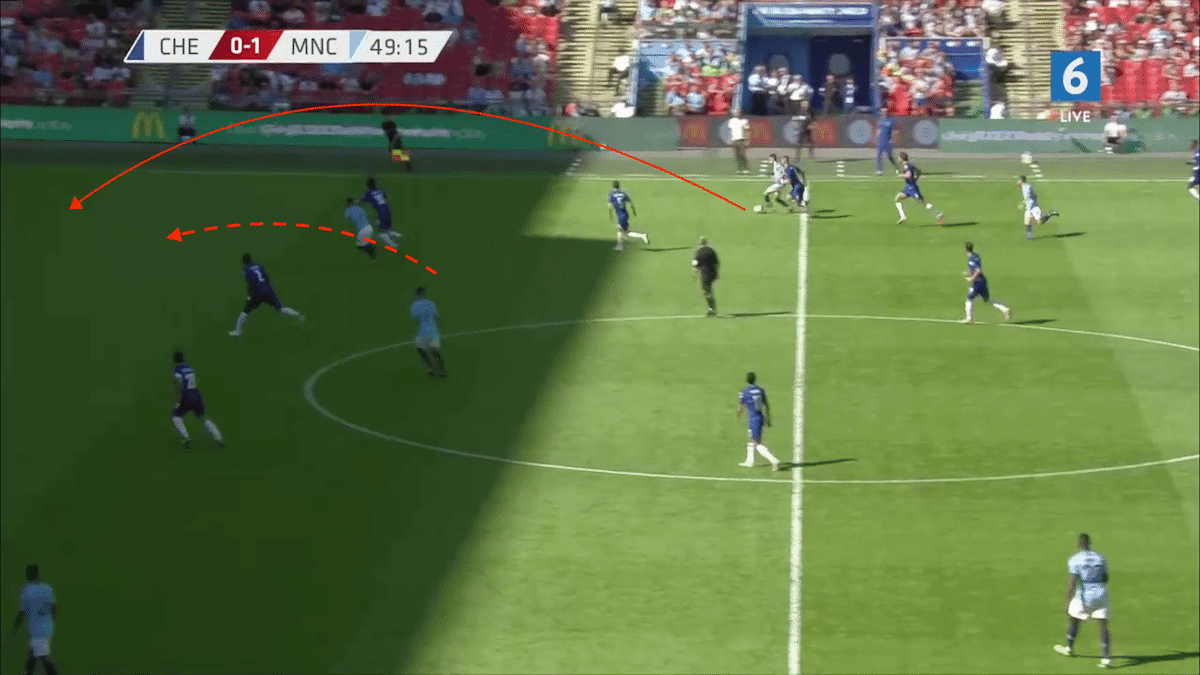 He then, spotting the striker's run, releases Agüero with an outside-of-the-boot pass in behind the Chelsea defence, putting the former Atlético Madrid man through one-on-one with the goalkeeper.

His opportunities may not yet be coming as frequently as he and many would hope, but City know they have a real gem on their hands in Foden and, fearing a repeat of the Sancho situation, are keen to end speculation over his future by tying him down to a long-term deal.

And in Guardiola, Foden can not only count on a coach capable of helping him realise his vast potential, but also perhaps his biggest fan.

“I would never have doubts about the quality of that guy – not just with the ball. He looks skinny, not strong, but he’s really, really strong. He’s an outstanding young player,” The Catalan tactician enthused after Foden started a Champions League group-stage fixture against Hoffenheim in December.

“I think England has a diamond. I know it’s not easy when you are with the big clubs. There are few 18-year-olds who could play regularly, competing with Kevin De Bruyne, Gündoğan, David Silva. He’s special, he has had minutes and, in the future, will have a lot of them.”