Manchester City‘s academy might be the most luxurious and boast the facilities most alluring to the best young talent at present, and Chelsea‘s youth set-up might have been most prolific in recent years, but no English club is more synonymous with turning academy hopefuls into bona fide first-team stars than Manchester United.

From the Busby Babes to the Class of '92 and beyond, the Red Devils have a long and proud history of putting faith in young players.

Indeed, current caretaker manager Ole Gunnar Solskjær has been quick to adhere to the club's traditions when it comes to giving senior opportunities to youth-team players, with outstanding Dutch winger Tahith Chong handed a senior debut in January and 18-year-old attacker Angel Gomes given first-team minutes.

Next off the production line, it seems, is Mason Greenwood.

Still only 17, Greenwood penned professional terms with United in October and his performances in the club's under-age teams this season have led many to predict he could make a breakthrough at senior level before the end of the campaign.

The teenager has already been involved in matchday squads with the first team and Solskjær included the youngster in United's travelling party for a mid-season warm-weather training retreat to Dubai in January, which suggests he is very much on the cusp of senior action. 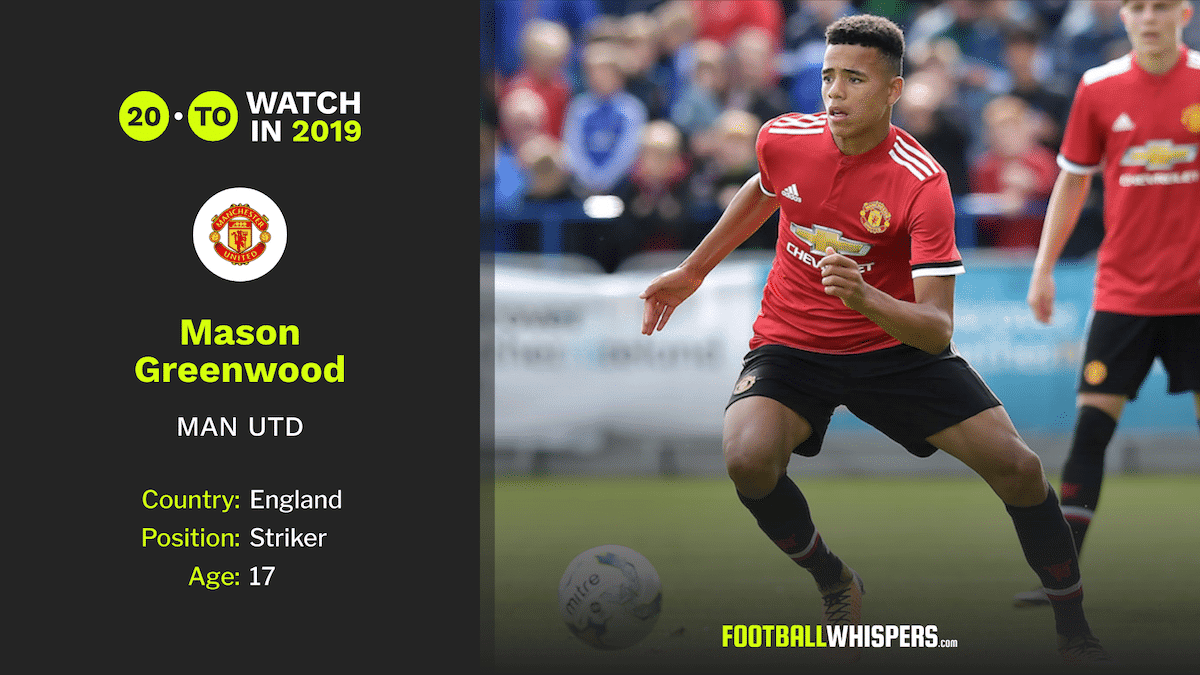 “There are quite a few young kids coming through,” Solskjær said recently.

“Jimmy Garner was there [in Dubai], Mason, [Tahith] Chong and [Angel] Gomes. So there are players there coming through. Mason is one of them. You've got to remember that he's only 17.”

Greenwood was the top scorer for United as they won the Under-18 Premier League North last season, despite being significantly younger than most of his team-mates and opponents.

And this term has seen him take his game to yet new heights. At under-18 level – which he already appears to have outgrown, such is the ease with which he dominates games – he has scored 20 goals and registered eight assists in just 18 appearances; he has five in five, plus one assist, in the under-19s, and one goal from two outings with the under-23s.

With his flawless technique and graceful, upright running style, Greenwood has drawn comparisons with former Old Trafford favourite Robin van Persie, while his individual flair, creativity and effective dribbling recalls images of a young Cristiano Ronaldo tearing down the flanks at the Theatre of Dreams; a heady combination of attributes.

Aside from his many technical strengths, Greenwood appears to have a calm head on his shoulders and possesses the humble authority of a player who recognises how good he is but also have far he has yet to go; every step up in level of competition has been met with alacrity, betraying no signs of nervousness of doubt. 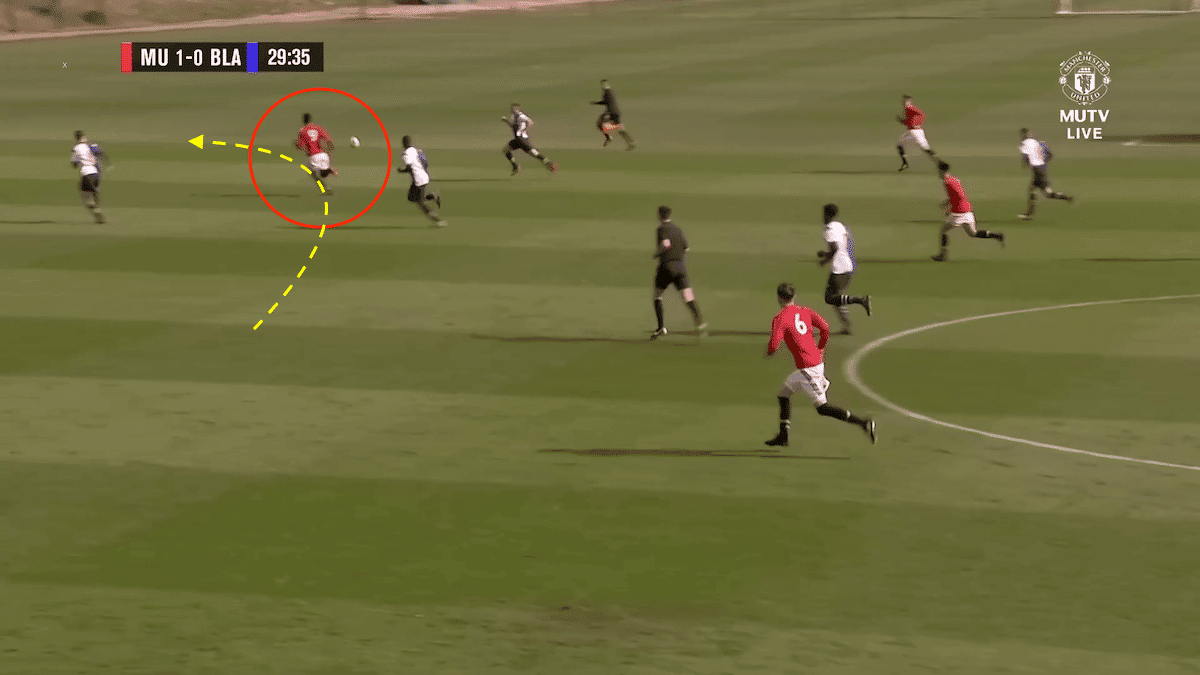 When watching Greenwood in action, his mobility across the front line is instantly apparent. Whether dropping deep or running the channels, his movement creates space for team-mates.

Above, we see an example of this from an under-18s game against Blackburn Rovers last season, with the teenage striker pulling out to the right flank to offer a passing outlet. 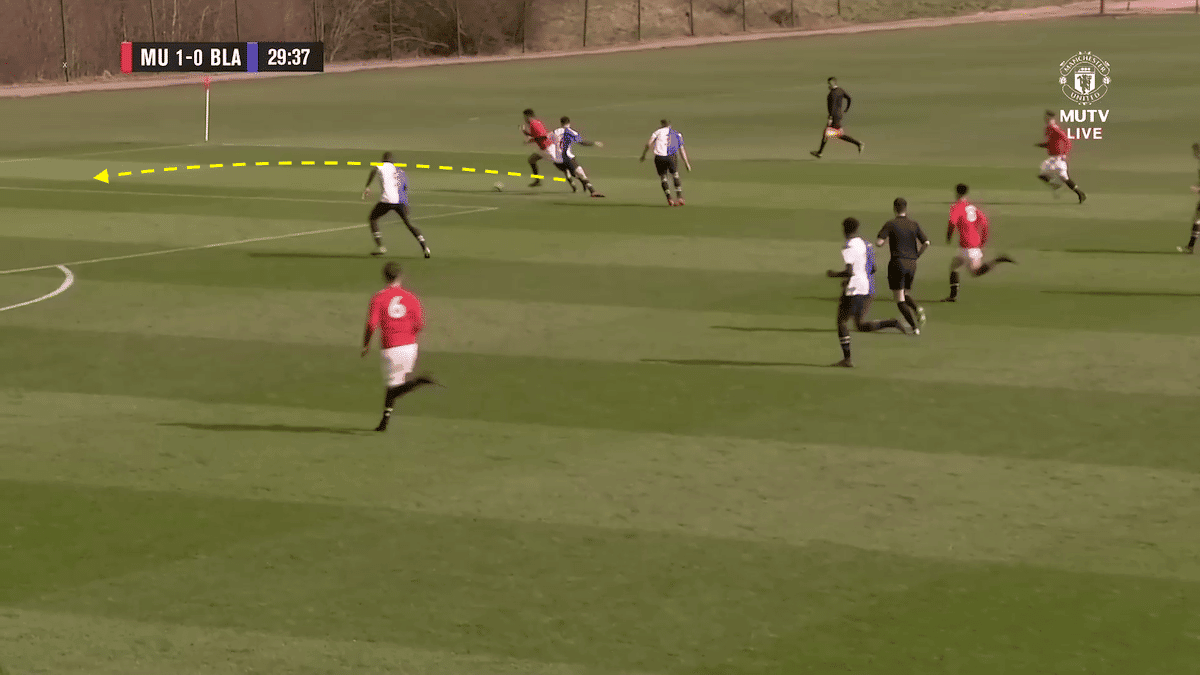 When out wide, his immaculate touch and bewitching dribbling skills make him a difficult prospect for full-backs to contend with. Here, he spins away from his marker and bursts towards the byline. 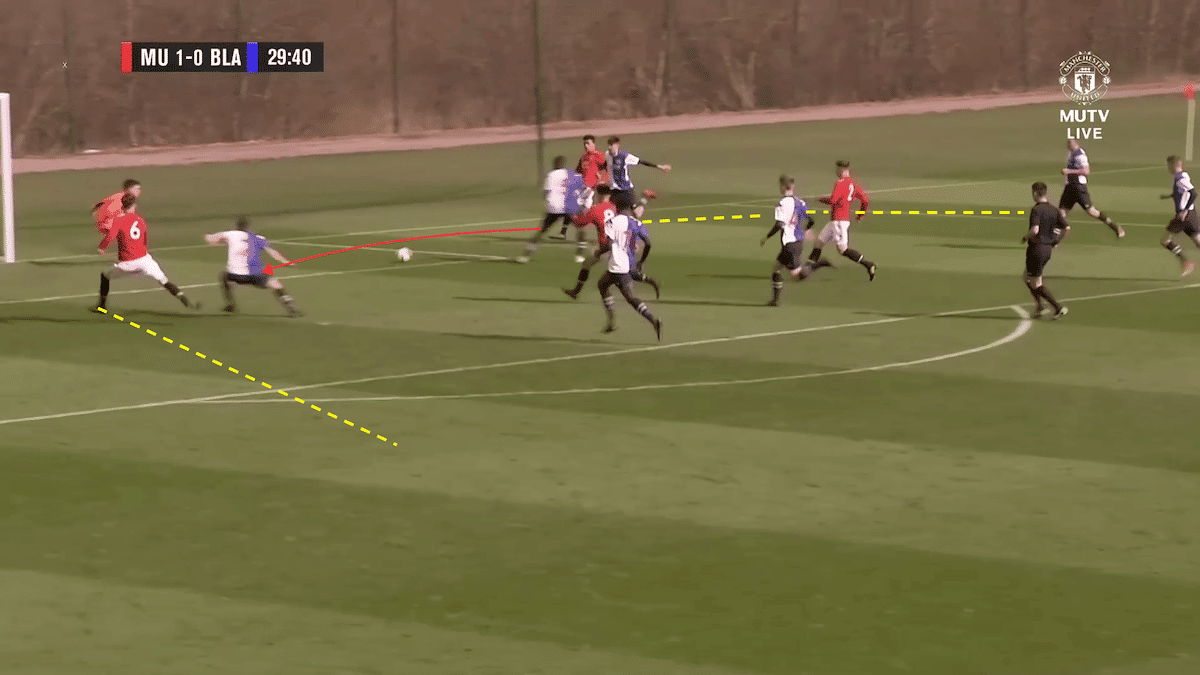 Drawing the attention of two more Blackburn defenders, Greenwood creates a simple tap-in for an on-rushing midfield colleague by having the poise and wherewithal to lift his head and unselfishly slide a pass into the danger area.

There may well be quicker players within the United youth set-up – such as flying Dutchman Chong – the key to Greenwood’s ability to bamboozle defenders with his direct, aggressive dribbling style is his unpredictability. He possesses the rare trait of being able to strike the ball equally well with either foot, meaning he is also comfortable dribbling to either side.

Ordinarily, a defender would look to funnel an advancing attacker on to their weaker side, but this isn’t possible with Greenwood. 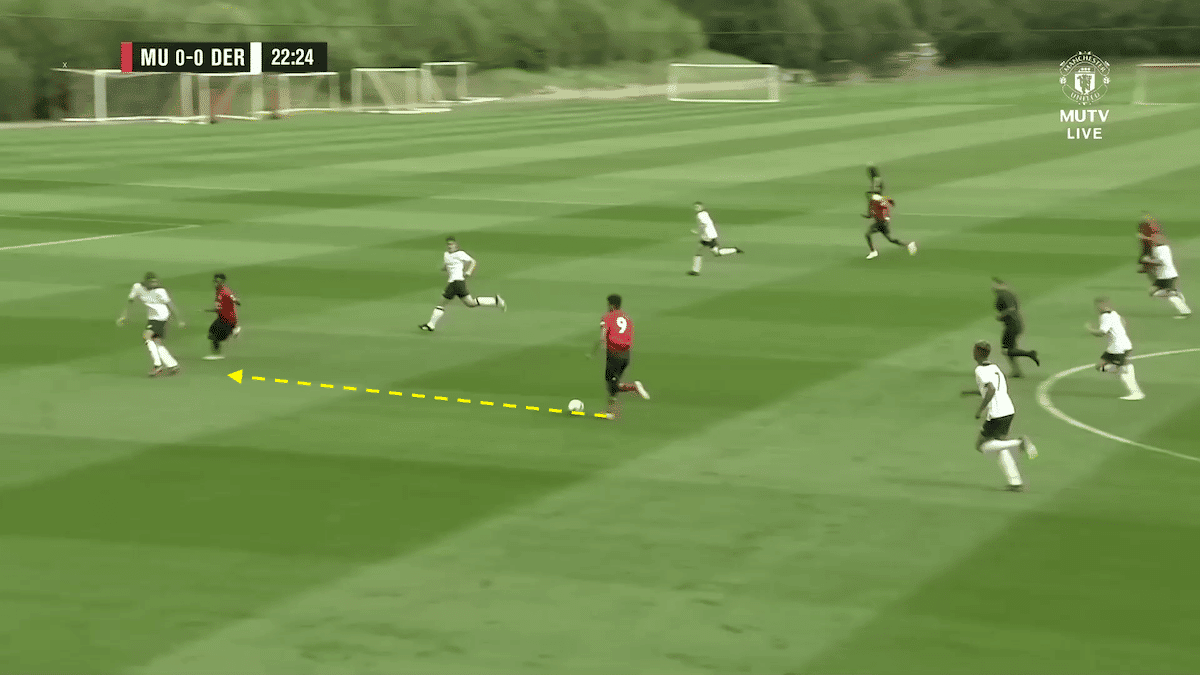 As we see above, in a recent fixture against Derby County, Greenwood has dropped deep in search of possession, collecting the ball on the edge of the attacking third before then looking to break forward and commit defenders. 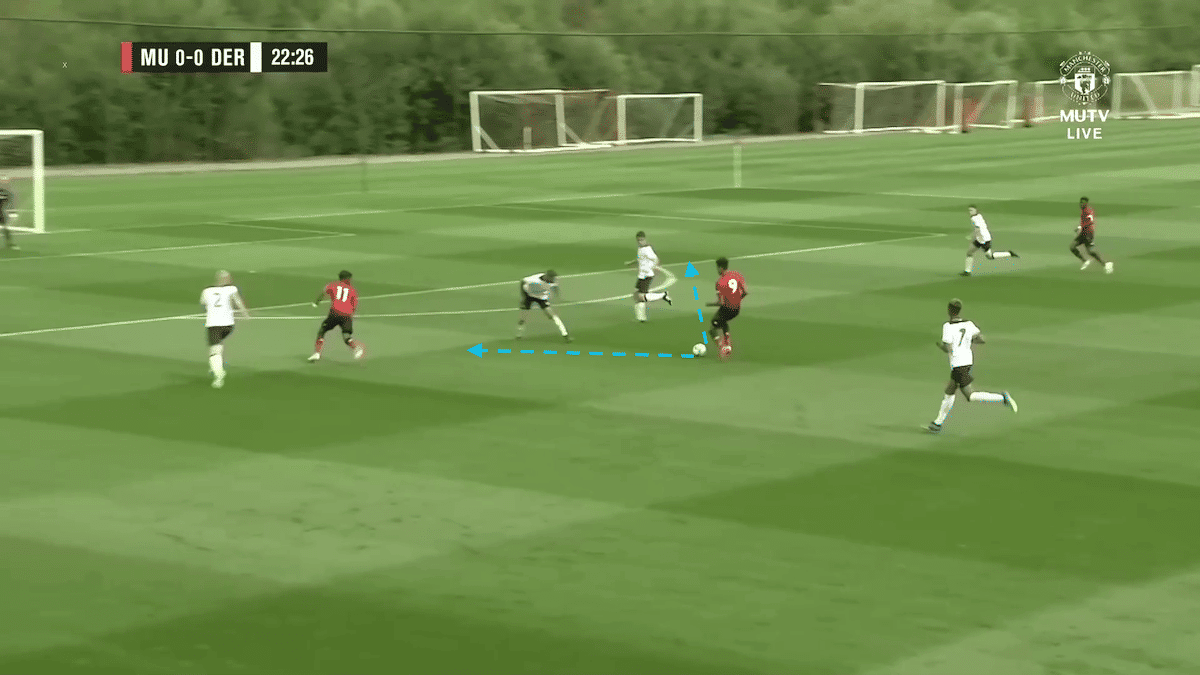 As he reaches the edge of the penalty area, his opponents are given no clue as to which way he intends to move.

This would be a confusing prospect for a seasoned pro, let alone a teenage defender still learning his trade. 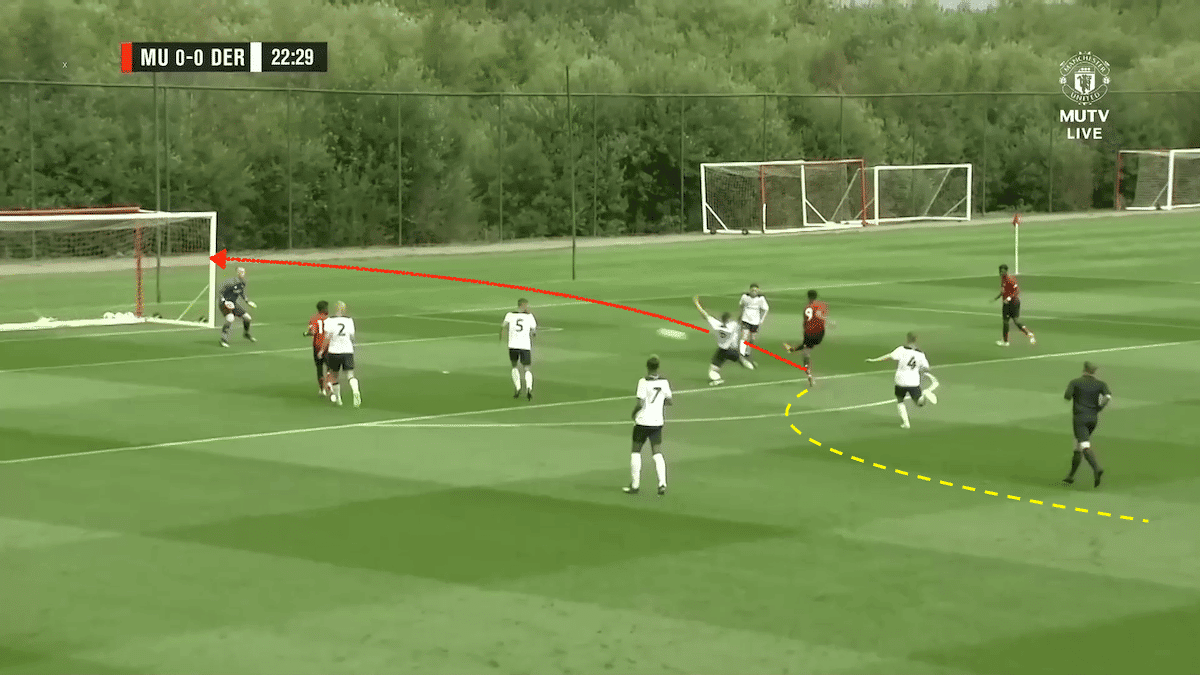 After a couple of quick step-overs, reminiscent of a young Ronaldo, Greenwood elects to burst to his right, striking an inch-perfect shot beyond the helpless goalkeeper to give United the lead.

And Greenwood has a penchant for the spectacular, capable of the game-winning moments of breathtaking technique which set the very best players apart. 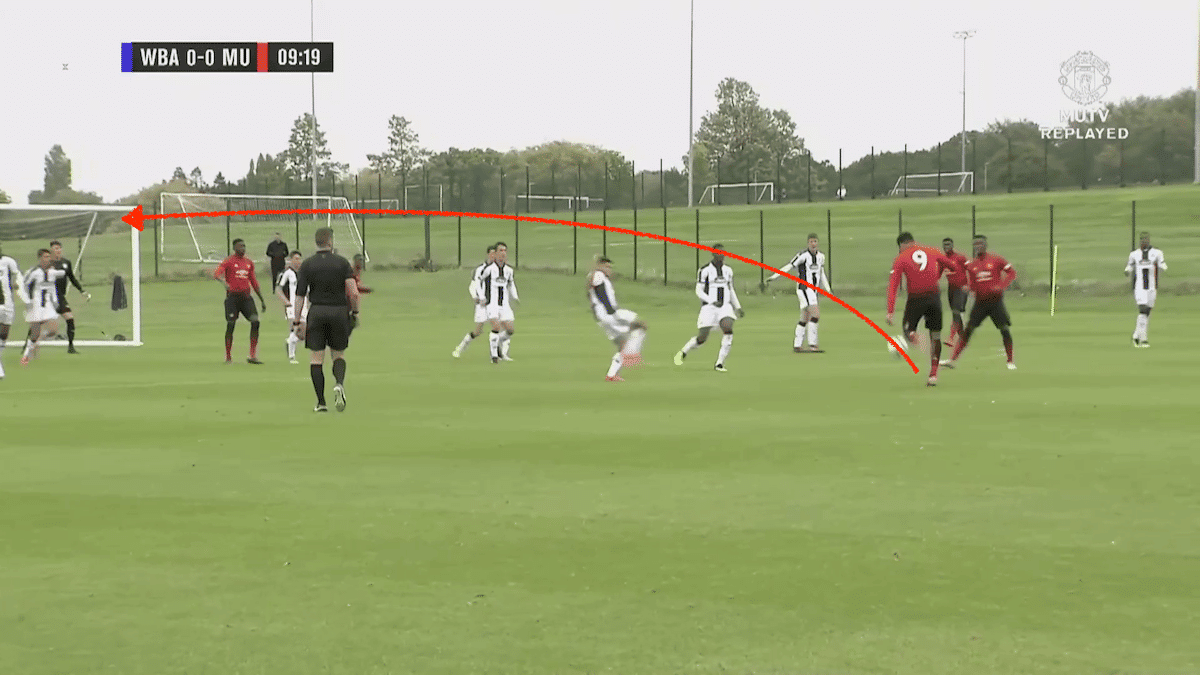 Once such example came in September last year, when Greenwood opened the scoring against West Bromwich Albion with a stunning, outside-of-the-boot volley from 25 yards, yet another addition to a breathtaking highlight reel of goals the youngster has scored this term.

It remains to be seen whether Solskjær will be appointed United boss on a permanent basis this summer, but the former Old Trafford hero is keen to plan for the future regardless, handing the baton to a new generation of potential stars.

Chief among them is Greenwood. There are no certainties when it comes to predicting the career trajectory of a prospect so young, but Greenwood looks as close to a sure thing as is possible.