Leading the scoring charts in the Bundesliga, ahead of such established stars as Robert Lewandowski and Marco Reus, and already a record-breaker in the German top flight and his native Serbia, one could be forgiven for thinking 21-year-old Luka Jović has thus far lived a charmed existence as a professional footballer, rising to such prominence with little resistance.

The Eintracht Frankfurt striker, who is currently in the second season of a two-year-loan from Benfica, has already overcome his share of adversity on his path to becoming a reported target for Liverpool, Barcelona and Bayern Munich, however.

After staring in a developmental league in Belgrade, a two-hour journey from Batar, the Serbian village he grew up in, Jović was offered the chance to sign for Red Star, the club he fanatically supported.

“Luka is a natural talent. He has it all – strength, technical skills, powerful shot and creativity. He knows where the goal is, and is a born scorer.” Red Star general director Zvezdan Terzić told ESPN FC of the young striker. “I first saw him when he was 15, and immediately knew that he was different from all the others. He has always had class.”

With the equaliser in a 3-3 draw with Vojvodina in his senior debut, Jović became the youngest scorer in the history of the Serbian top flight, at 16 years, five months and five days. The following season, he became the youngest player to feature in the Eternal derby, between heated Belgrade rivals Red Star and Partizan – for whom his father turned out as a midfielder in the 1990s.

In November 2015, by which point he was a regular starter for Red Star, Jović was the target of physical threats aimed at extorting money from him and his family. The perpetrator was soon apprehended by the Serbian authorities, but it wasn't long before Jović was on the move.

After 13 goals in 43 first-team appearances for Red Star – spread, it must be said, unevenly across spells of inconsistent form – he joined Benfica in February 2016, in a deal initially reported to have been worth just €2.2million – although Football Leaks later claimed the fee amounted to more than €7million.

At Benfica, stiff competition for places in attack at the Estádio da Luz saw Jović begin in the B team. He earned just four first-team appearances in 18 months, failing to score. As homesickness set in, so too did indiscipline, with the young striker reprimanded for being spotted in a Lisbon night club too close to an upcoming game.

“I wasn’t professional,” Jović later admitted of his time at Benfica. “I had mental issues, I had homesickness and I made serious mistakes.”

So by the time Eintracht agreed to take Jović on loan in the summer of 2017, agreeing a purchase option for the end of the current season reportedly worth between £7million and £10million, it wasn't a deal without risk. Although the Bundesliga side were acquiring a high-potential young player, at 19 he was already showing signs of being a busted flush.

In Frankfurt, though, perhaps owing to the eastern European influence at the club, with Slovenia-born director of football Fredi Bobic, Croatian manager Niko Kovač – now of Bayern – and Croatian winger Ante Rebić and fellow Serbs Filip Kostić and Mijat Gaćinović among the key players, Jović has been able to settle and showcase his immense talent. 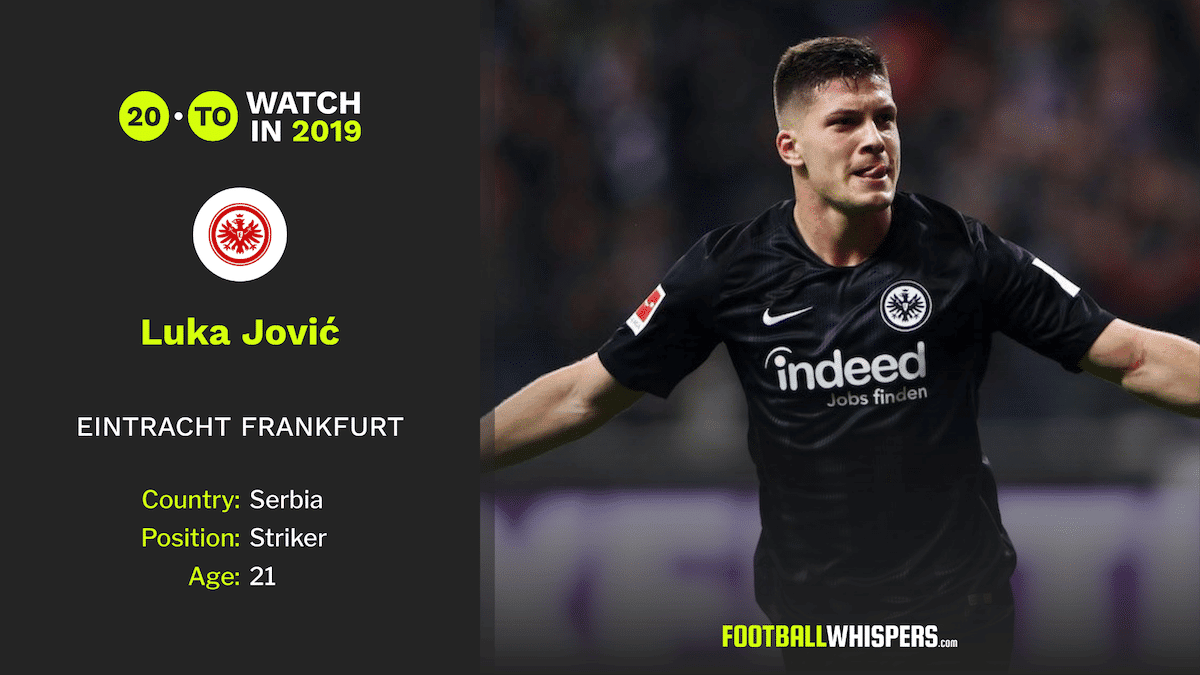 After slowly working his way into the team last season, scoring nine goals in 27 appearances to help Eintracht finish seventh and lift the DFB Pokal, he is now attaining a level of confidence to match his skills, with 13 Bundesliga goals to his name already in 2018/19, scoring at an astounding rate of one every 89 minutes.

Forming one of the most devastating strike partnerships in Europe alongside Frenchman Sébastian Haller, who himself has 11 Bundesliga goals and eight assists to his name, Jović has helped fire Eintracht to fifth in the table, bringing them into contention for a place in next season's Champions League.

Jović's haul in the 7-1 thrashing of Fortuna Dusseldorf in October saw him become the youngest player in Bundesliga history to score five goals in a single game, and his five Europa League goals this term takes his all-competitions total at the time of writing to an impressive 18 from just 25 appearances – only 17 of which have been starts.

Possessing that rare gift of being genuinely two-footed, the broad range of finishes Jović has demonstrated at Eintracht are a result of his being able to strike powerfully and accurately for goal from any angle.

Indeed, although he take penalties with his right foot, many of his most impressive strikes – such as the sumptuous chip against Lazio in the Europa League, the acrobatic back-to-goal volley versus Dusseldorf and the rasping, first-time finish against Schalke – have been scored with his left.

The key, though, to Jović's prolific return is his ability to loiter. Whether through coaching, instinct or some combination of the two, the 21-year-old has an acute awareness of where the ball is most likely to arrive when he enters the penalty area.

Having identified the “position of maximum opportunity”, as the often criticised former analyst and erstwhile advisor to the FA Charles Hughes would term it, Jović has perfected the art of slowing or halting his run, allowing opposition defenders to be dragged towards the ball and waiting for his chance to arrive. His ability to appear in the right place at the right time might be written off as pure luck were he not able to repeat the trick so regularly.

Outscoring some of the best forwards in the world has inevitably seen Jović catch the eye of Europe's richest and most prestigious clubs. Liverpool have been linked with a move, Bayern are always in the hunt for the Bundesliga's best and brightest and Barcelona reportedly see the Serbian international as the ideal long-term replacement for Luis Suárez.

And in Kevin-Prince Boateng, a recent shock signing for Barça who played with Jović at Eintracht last season, the in-demand hitman already has a cheerleader at the Camp Nou.

“There are critics who only see Luka Jović play once a week,” Boateng told Sport Bild. “I have seen him play every day and can, therefore, say that he can become a world-class striker. He has everything to become that.

“You see that in training. He has football in his genes, he's a street footballer, and he has a nose for goal. He scores with his head, right or left foot. He is technically good and can shoot well with both feet. He just has everything a striker needs.”

For Eintracht, who will exercise their purchase option on the player, Jović represents a win-win scenario: either they hold on to one of the hottest strikers in Europe for another season or the cash in and immediately make an enormous profit.

Either way, Jović is certain to figure among the top end of the scoring charts in one of Europe's major leagues for years to come.