There is something about the way Jean-Clair Todibo grasped his first-team opportunity at Toulouse this season that suggests he is a player with an intense hunger to succeed.

Only 19 years old, the young Frenchman was promoted to the senior ranks at Stadium Municipal to fill the void left by Issa Diop's £22million summer move to West Ham United.

Almost immediately, Todibo exhibited a preternatural authority in organising a backline of more experienced professionals, proving physically and technically ready for top-flight football in one of Europe's major leagues. Even without knowing his backstory, one would get the sense the teenager possesses a unique kind of drive.

This resolve and strength of will, it seems, can be traced back a decade, to when Todibo was nine. The youngster was on his way to judo practice when he was hit by a car. He broke both legs and doctors were unsure whether he would walk again, let alone play football.

But Todibo recovered and was playing again within a year. He became one of the hottest prospects in the Paris area – a prolific hotbed for young footballing talent – and signed for Toulouse in 2016. Next season he will play for Barcelona. 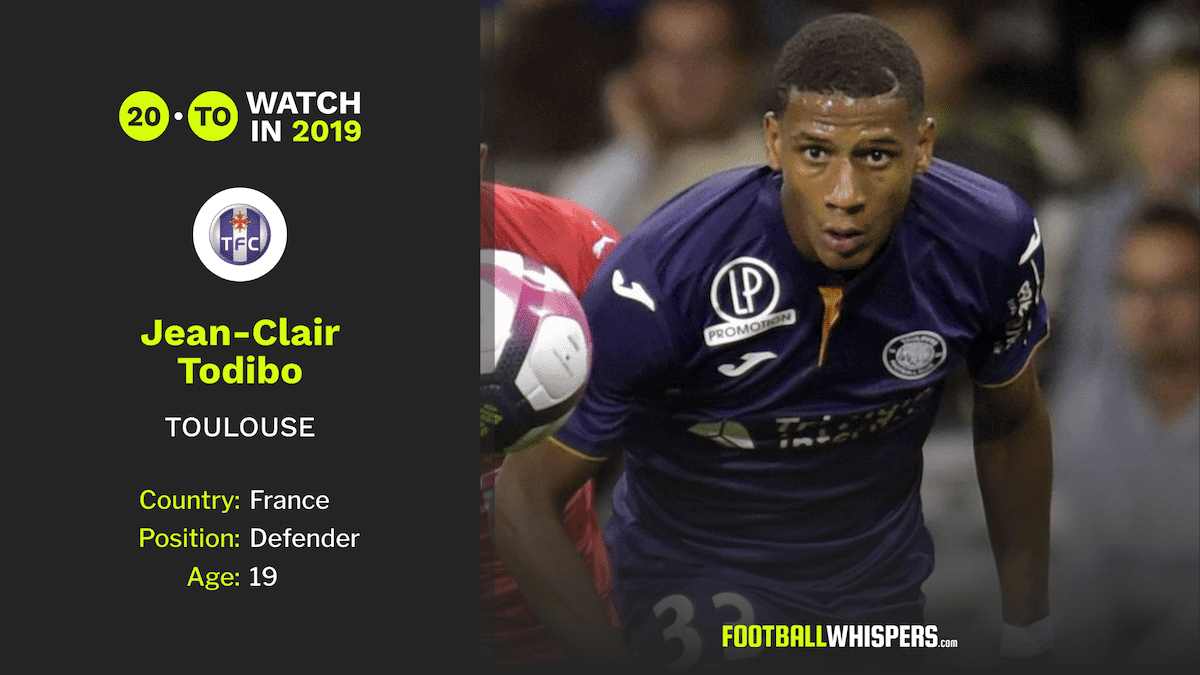 The Catalan giants and reigning La Liga champions have been sufficiently impressed with Todibo's first steps in senior football to tie him to a pre-contract agreement, committing to take the player to the Camp Nou when his current deal expires at the end of the season, fending off interest from several other major clubs to do so.

Impressively, Todibo has managed to make such an impact in just ten first-team appearances for Toulouse. He became an instant regular in Alain Casanova's XI following his debut in August, a 2-1 in over Bordeaux, but has been absent from the side since November, with the player jettisoned from the team after failing to agree a contract renewal.

“The situation and the reality is relatively simple,” Toulouse's co-director general Jean-François Soucasse said at the time. “The club has been in negotiations with the player and his entourage over his first professional contract for many weeks.

“He was presented with a salary proposal unprecedented in the history of the club – very much above that of Diop and Alban Lafont [the talented goalkeeper who joined Fiorentina last summer] to name only two recent cases.

“At the start of the week, Jean-Clair indicated to us that he still did not know what direction he wants his career to go in.”

In spite of their justification, it seems a self-destructive and petty move for Toulouse to deny themselves the services of such a gifted player. With his future now committed to Barcelona, the Ligue 1 side are unlikely to consider Todibo for selection for the rest of the season. At the time of writing, Barça are reportedly working to expedite the youngster's switch to Catalonia, considering offering a nominal fee to take him during the January transfer window.

Toulouse's loss is undoubtedly Barcelona's gain. Todibo, who began as a central midfielder in the youth ranks before being moved into a defensive role, has all the attributes required of a modern, top-level centre-back.

At 6ft 3ins, he is a dominant presence aerially, and showcased his ability to threaten goal from pieces with his first – and so far only – senior goal, a powerful header in October's 1-1 drawn away to Rennes.

He is also fast, mature as a communicator and organiser, positionally astute and confident and skilled enough to bring the ball out from the back – an attribute that will surely be relied upon at Barcelona. 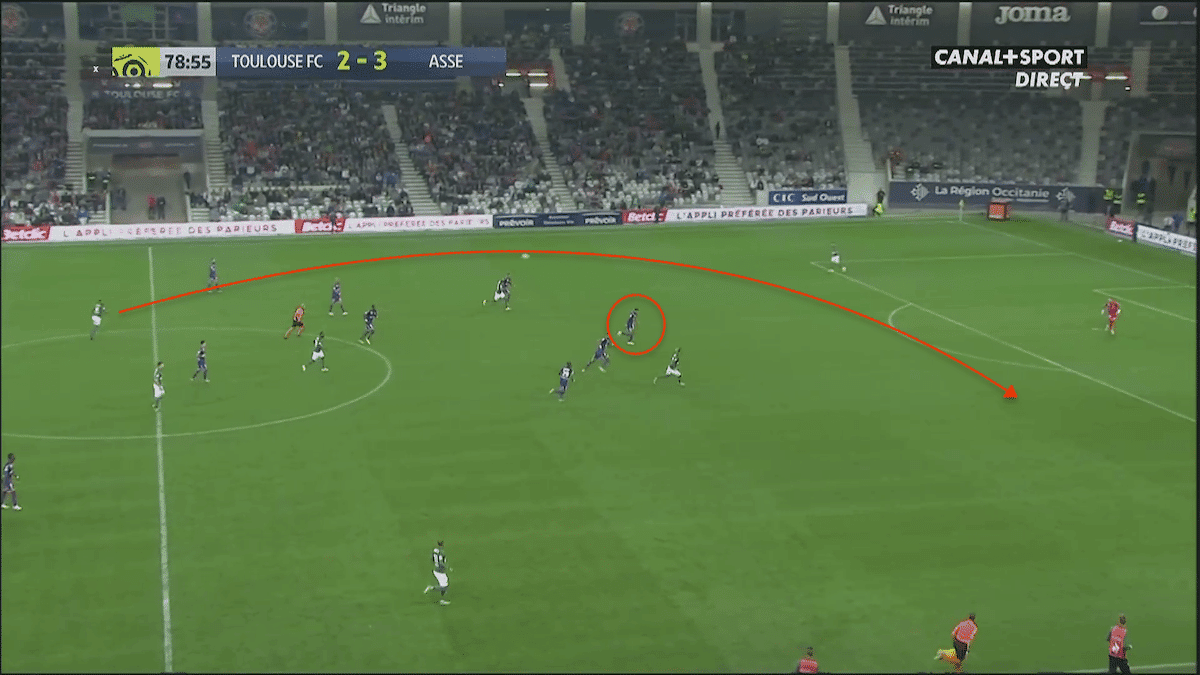 This sequence not only demonstrates Todibo's physical weapons – his pace and strength – but also his impeccable timing in the tackle.

Above, we see Saint-Étienne lofting the ball into the space behind Todibo's central-defensive partner, Cristopher Julien, which Les Verts striker Lois Diony is sprinting to collect.

Todibo (circled) has anticipated the move and already begun his recovery run. 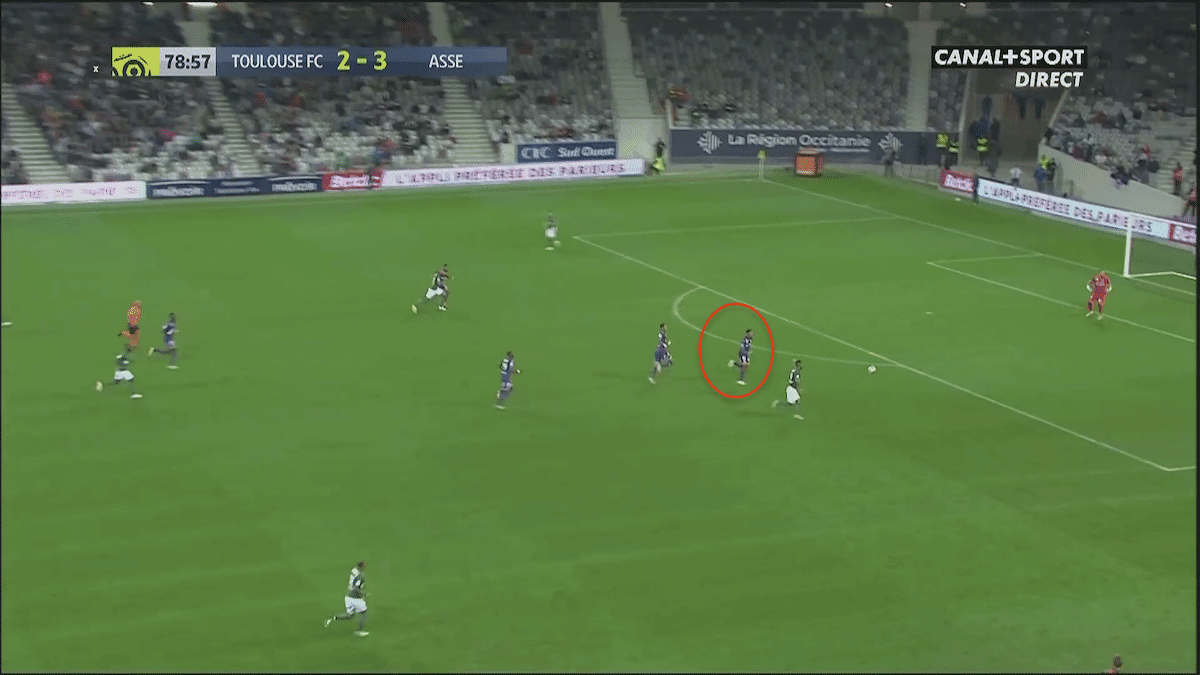 Todibo mades up ground on the advancing attacker, but Diony is still closest to the ball and threatening to break into a dangerous area. 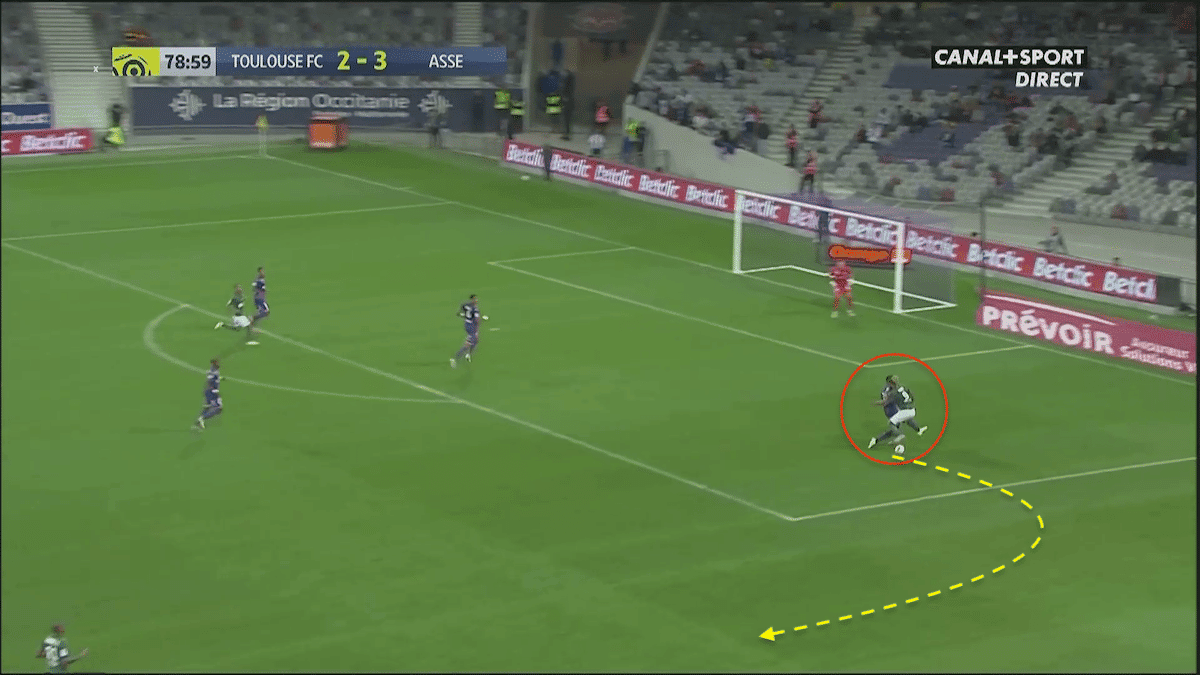 However, Todibo's speed allows him to reach the ball at the same time as Diony and, wary of conceding a penalty, he intervenes with a perfectly timed challenge, taking the ball with the outside of his right foot and calmly carrying it to safety. 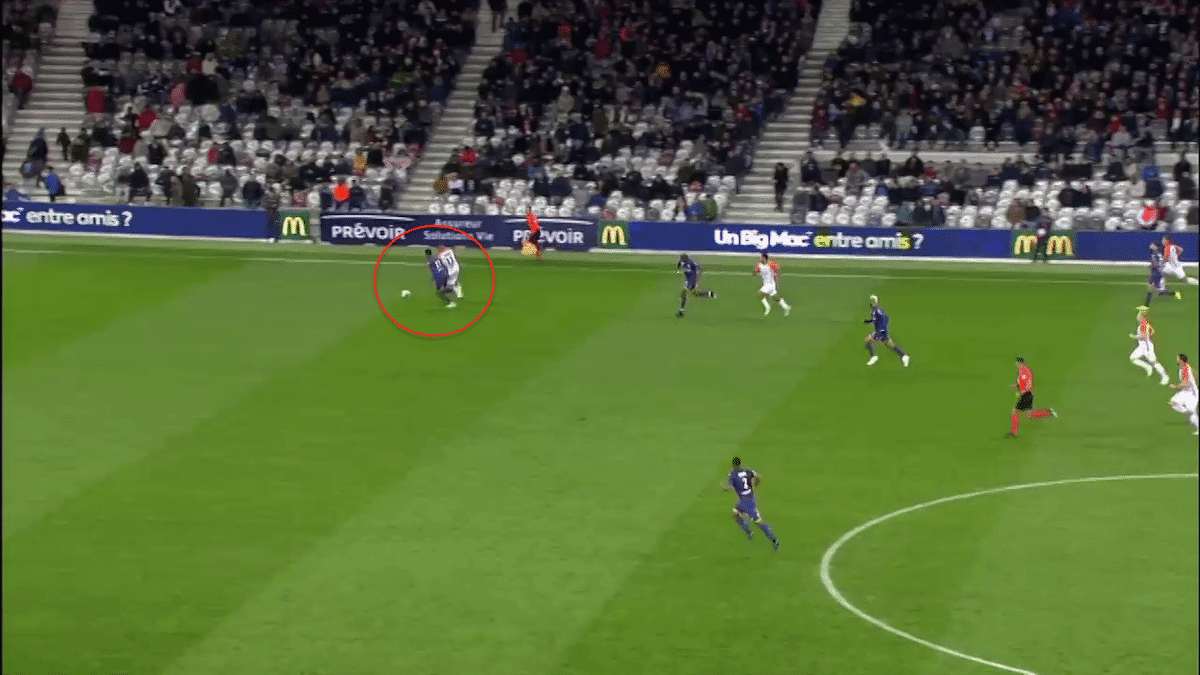 Above, in a 3-0 defeat to Montpellier in October, we again see Todibo employing his pace to track the run of an advancing opposition forward. 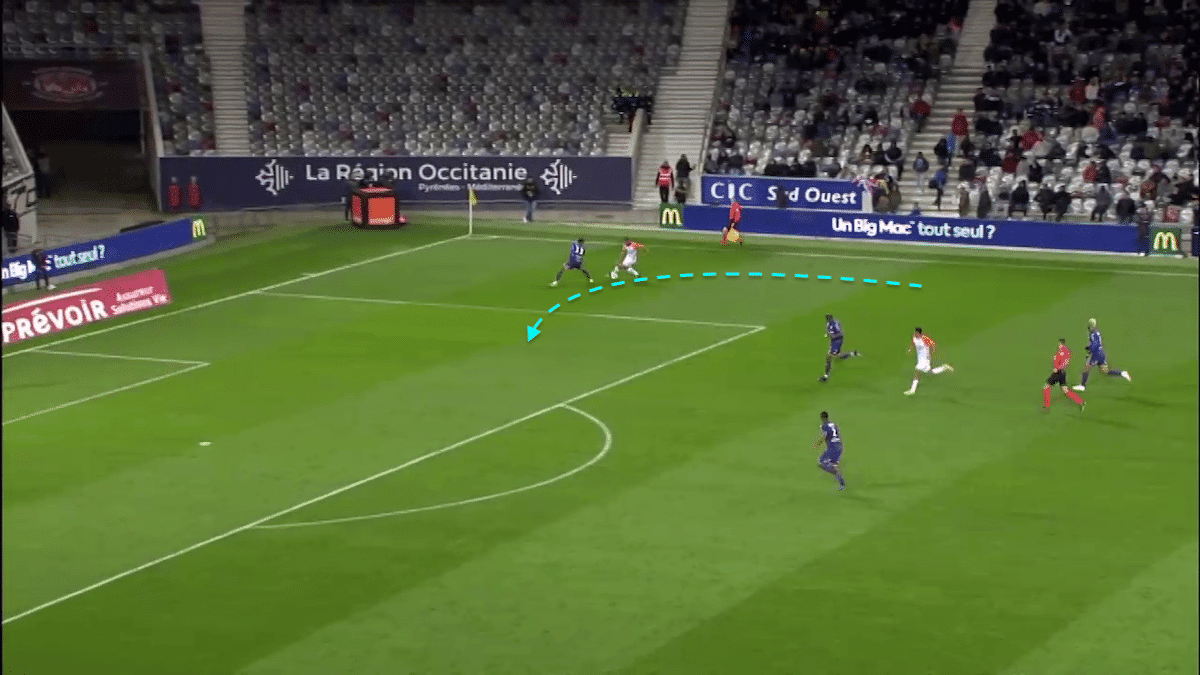 After being confined to a wide area by Todibo, the Montpellier winger attempts to cut inside the young defender. 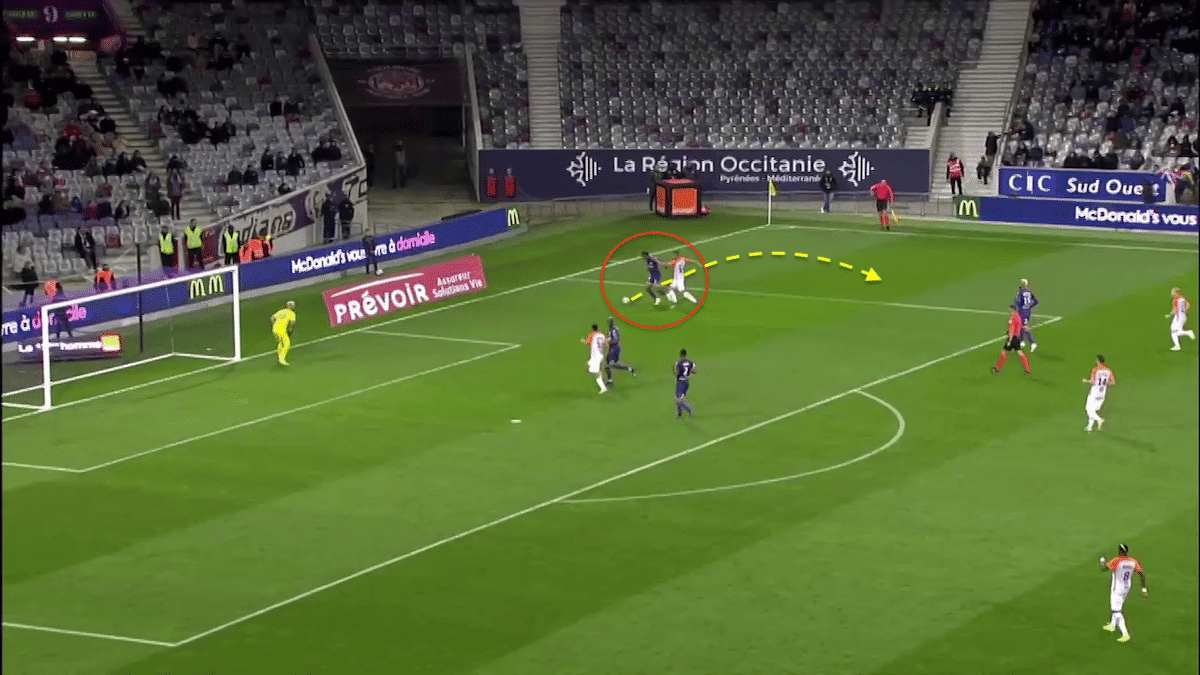 But Todibo expertly positions his body between player and ball, cleanly reclaiming possession without the need for a potentially risky challenge inside the penalty area. He then, once more, calmly carries the ball forward, rather than lashing it clear.

There remains, however, a naivety to Todibo's game. A flaw that one would expect the teenager to eradicate with time and proper guidance, he is occasionally guilty of overplaying in dangerous positions. 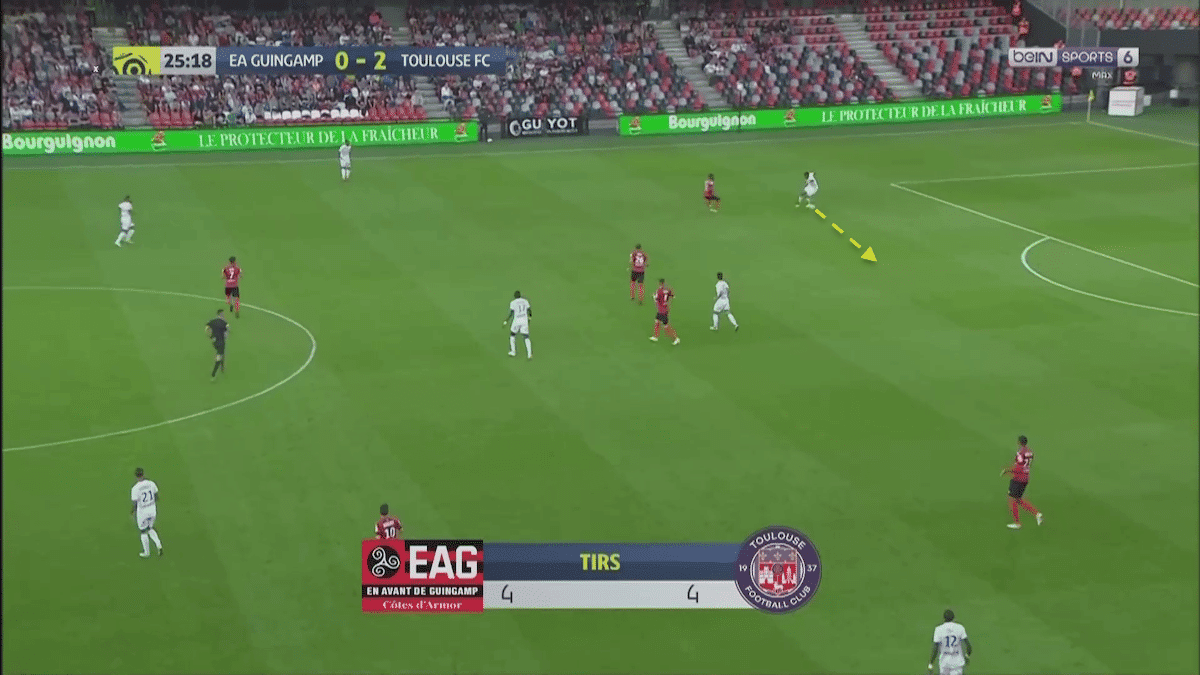 Here, we see Todibo with the ball just outside the Toulouse penalty area, closed down by a Guingamp attacker. He attempts to move inside into the open space. 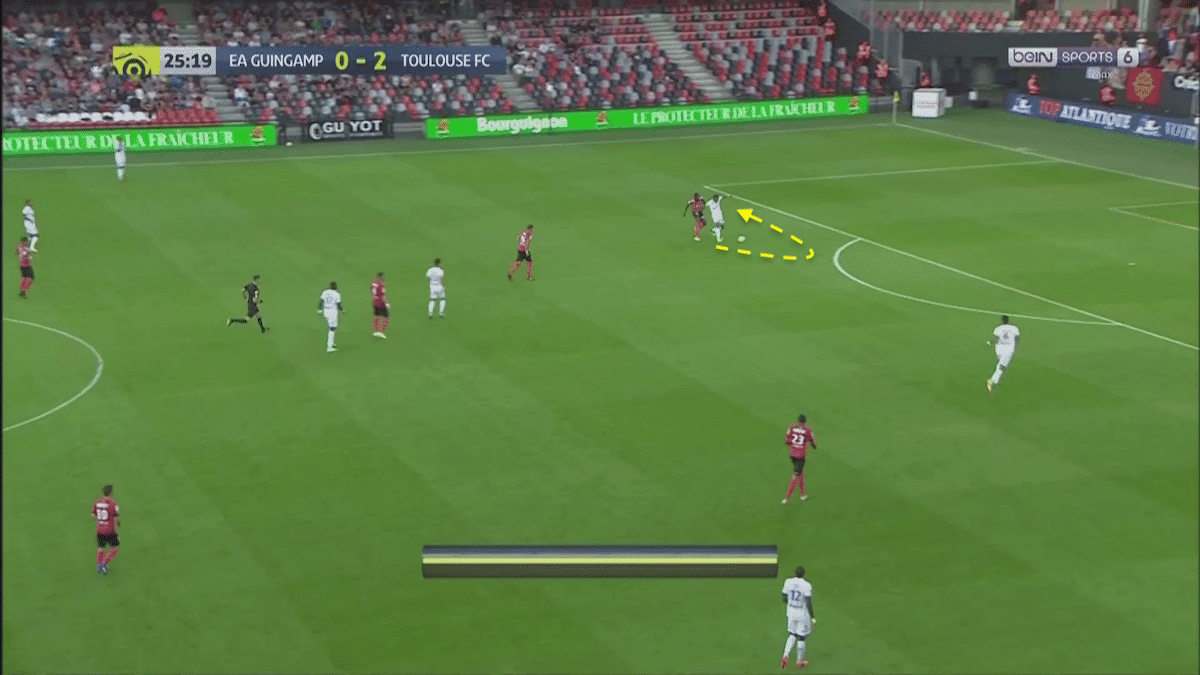 With Guingamp cutting off his passing options and his nearest opponent closing in, rather than clearing to safety or laying the ball back to his goalkeeper, Todibo tries to turn away from the Guingamp forward. 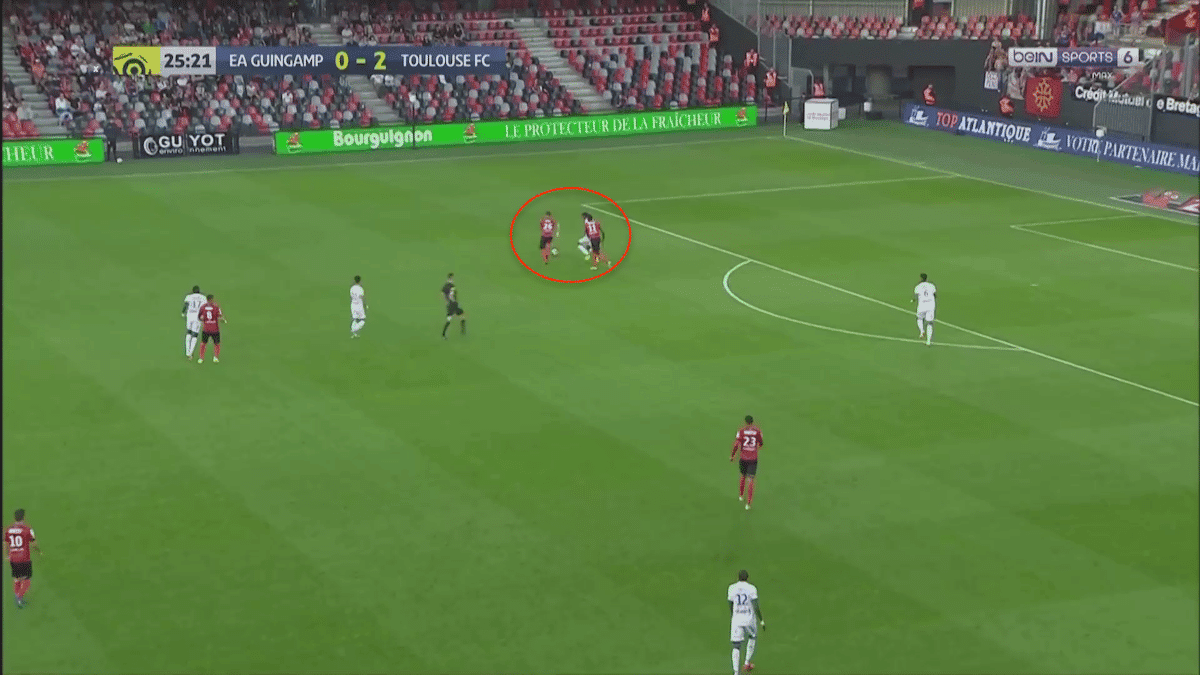 In doing so he takes a heavy touch and is dispossessed when a second Guingamp player also closes in. Todibo then brings the attacker down just outside the box, picking up his second yellow card of the game and earning his first senior dismissal.

Next season, when he will be able to count World Cup-winning centre-backs Gerard Piquée= and compatriot Samuel Umtiti among his colleagues, not only will Todibo's ability and potential be truly tested, but he will be able to learn at the feet of two masters of his trade.

And, with his best years still as much as a decade away, he can begin to prove he is worthy of marshalling the Barça backline for years to come.

When Todibo eventually pulls on the famous Blaugrana shirt for the first time, he could be forgiven for allowing himself a moment of reflection: a career that was almost over before it began is blossoming sooner than anyone could have expected, thanks in no small part to Todibo's unshakable determination.