Anyone that has ever played Football Manager knows that it’s more than just a game. The world of virtual management has the ability to devour a person’s life, and has often been cited in divorce cases and the breakdown of relationships. It is an all-consuming phenomenon that, for us mere mortals, offers the closest thing that we could ever get to the real life counterpart.

One of the chief sources behind the franchise’s success is its database. Creators Sports Interactive pride themselves on providing and accurate representation of the real world football environment, and analysing player attributes is its core feature. The Football manager team is now supported by a network of nearly 1,500 scouts, whom dedicate themselves to recording the current and potential abilities of every player at a given club.

The FM database is so highly regarded that various real life managers have confessed to using it as a research tool whilst the incorporation of Prozone in recent years has only further enhanced its reliability. Of course, some virtual predictions don’t quite work out (Cherno Samba anyone?) but the world of Football Manager has rightly prophesied the future success of many future stars.

Here are eight of the best:

Danny Murphy might not be the biggest name on our list but, in terms of Football Manager prophecies, he is possibly the most significant. In fact, he is the one that Sports Interactive’s Miles Jacobson has cited as a vital breakthrough for the brand.

Back in 1992, Football Manager, then under its Championship Manager guise, had just started to introduce a scouting network to increase the accuracy of its database. Murphy, still a trainee at Crewe Alexandra, was one player being touted as a future England midfielder with a long and successful Premier League career. While the former aspect was limited to just nine international appearances between 2001 and 2003, the latter prediction was spot on.

Murphy amassed over 400 Premier League appearances, which included huge success during his spell at Anfield. The now retired 38-year-old was one of the first big forecast that the world of Football Manager would call years in advance; it certainly wouldn’t be the last.

Long before gaining worldwide stardom as a rock at the heart of Manchester City’s defence, Vincent Kompany was a little known defender plying his trade in Belgium’s Pro League at Anderlecht. However, in the world of Football Manager, the future Premier League winner had become a must buy that could spearhead any club to glory.

Kompany, who could be purchased for an even smaller fee than the £6million that City would pay Hamburg in 2008, would become a powerful stalwart of any team in the virtual arena. Back in 2005, players might have been forgiven for thinking the Belgian’s virtual achievements wouldn’t be matched in real life, especially as he was only just breaking into the senior national setup. Skip forward to 2016, and those predictions all came true.

It’s just a shame teammate Anthony Vanden Borre wouldn’t quite live up to his potential of Football Manager.

Next on our list is another Belgian that came to Football Manager prominence during his time at Anderlecht. At 16 years old, Romelu Lukaku was a must buy on the 2010 edition of the game. Available for just a few million, the virtual teen sensation had the potential to become a decent Premier League striker by 18, and a genuine superstar by 21. Fast-forward six years, and those predictions have been mirrored perfectly by the real life Everton star.

Earlier this season, Lukaku became only the fifth player to reach 50 Premier League goals before turning 23 while his stats at such a premature stage eclipse those of Cristiano Ronaldo and Lionel Messi at a similar age. Meanwhile, the striker is fast approaching the half century of international caps and has played a major role in firing the Red Devils to top spot in the FIFA rankings.

If the powerful Belgian continues to develop over the coming years, he might yet emulate the honours and accolades that his virtual counterpart would regularly go on to accomplish.

By the time Neymar finally completed his €57m move from Santos to Barcelona in the summer of 2013, the entire world knew all about the prince of Brazilian football. After all, the supremely skilled forward was already Selecao’s main attraction ahead of the 2014 World Cup while YouTube clips demonstrating his talents had been widely circulated across social media. The excitement had been building for at least two years leading up to his Camp Nou arrival but, in the realm of Football Manager, players knew about his potential even earlier.

Even at the tender age of 17, Neymar was already being touted for future world dominance by the Football Manager scouts. Despite physical immaturity, the Brazilian’s virtual embodiment could score goals at the highest level from the outset. He would eventually evolve into a 50-goal-a-season striker and command transfer fees even greater than his real life move to Barcelona.

In the world of Football Manager, Neymar has possessed the ability to become the world’s greatest for several years. In real life, he is well on track to becoming number one too.

Prior to becoming one of the world’s greatest modern day strikers, Poland star Robert Lewandowski was slowly climbing the ladder back in his homeland. In 2008, a potential switch from Lech Poznan to Blackburn Rovers was famously prevented by the Icelandic ash cloud. However, Football Manager players knew about the future Bayern Munich star’s talents long before Europe’s elite cottoned on.

Lewandowski was still a Znicz Pruszkow player when he burst onto the scene as a Football Manager great. Players could snap him up for a minimal fee, and he’d start scoring goals from the outset. At the time, he felt like one of the obscure European anomalies that the game’s scouts had overshot; in retrospect, the FM scouting network was spot on.

Blackburn must be kicking themselves. 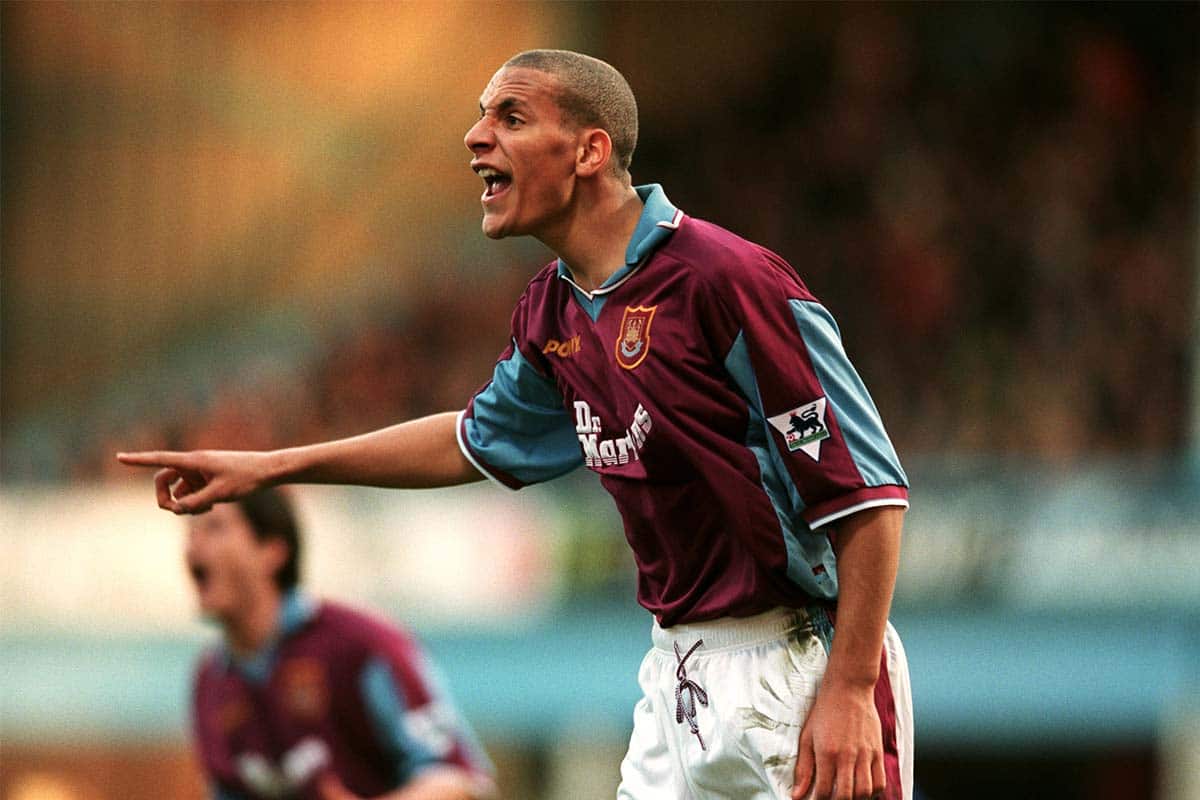 It’s no secret that the West Ham United academy boasts one of the richest histories for championing young English talent, and the setup undoubtedly reached its peak during the Premier League’s early years. The club produced a conveyor belt of top young talent, including the likes of Michael Carrick, Jermain Defoe and Joe Cole. Arguably the best graduate, however, was Rio Ferdinand. And the world of virtual manager was quick to forecast those fortunes.

Around the time of Championship Manager 2, Ferdinand was just starting to find his feet in senior football thanks to a breakthrough at Upton Park and loan spell at Bournemouth. Insiders at both West Ham and the FA were expecting big things of the commanding centre-half, but many fans were unaware of his talents; unless they had signed him on the game.

Ferdinand would develop into one of the world’s best and most cultured defenders on the game. Within a couple of years in reality, he’d be named West Ham’s Payer of the Year before transferring to Leeds for a huge £18million. Two years later, he would move to Old Trafford as England’s most expensive defensive signing, which would begin a 12 years of dominance at the top.

Aside from the English leagues, Italy was one of the first where the then-Championship Manager team truly gained a great reputation. This certainly showed with their prediction that Parma goalkeeper Gianluigi Buffon would go on to become an all-time great.

In truth, Buffon was far from being an obscure discovery; after all, he was part of a very successful late 1990s Parma team and was already starting to edge his way into Gli Azzurri’s senior setup, amassing a handful of international caps even at this premature stage. It was clear to see the upcoming custodian had a bright future, but the realm of virtual management was bold enough to claim he would become the number one No.1 in the world.

Alongside Iker Casillas, who was also highly rated from the early stages of Championship Manager,  Buffon would become the greatest goalkeeper of a generation. A string of club honours, and a World Cup winners’ medal, along with inclusion in multiple Team of the Year selections would vindicate those predictions made all those years ago. One of the best, in both reality and Football Manager.

Lionel Messi is the star of a generation. Five Ballon d’Ors, a haul of winners’ medals and the record of being Barcelona’s all-time leading scorer all by the age of 28 guarantees that the Argentina captain will go down as one of the greatest players to ever grace the beautiful game. In the world of Football Manager, those heights have been forecast for over 14 years.

Barcelona’s La Masia is  unquestionably the world’s greatest football academy, producing a conveyor belt of gifted youngsters in both the real and virtual arenas. At a time when Football Manager could include minors on the database, scouts forecasted big things for a 14-year-old Lionel Messi. In the physical world, his future at the Camp Nou was under intense scrutiny due to a lack of height; as far as Football Manager was concerned, Messi’s future stardom was never in doubt.

Messi is undoubtedly one of the biggest success stories of the Football Manager scouting network. Anyone that has seen the feature documentary will recall the anecdote of Alex McLeish’s son discovering the 14-year-old future superstar. In truth, that’s something that thousands of virtual managers can relate to. Quite frankly, each time the world’s best player scores another dazzling goal, Football Manager players from across the globe reminisce about their personal discoveries all those years ago with a smile.