England's youth teams continue to thrive, yet the senior team have not come close to replicating the side of 1966 by winning a major tournament – a semi-final appearance at Italia 1990 is as good as it's got in the years since.

After finishing bottom of their group at the 2014 World Cup, England fans will look back longingly on three successive quarter-final appearances at major tournaments under Sven-Göran Eriksson.

Next summer Gareth Southgate will take his new-look England side to Russia for the 2018 World Cup. If the first few months of his reign have been anything to go by, there's little to suggest we're in for a sudden, vast improvement.

There's no way of knowing how England will fare in the future. But with Harry Kane, Dele Alli, John Stones and Raheem Sterling there is the talent to suggest the Three Lions could finally roar again.

So in order to see if England make anything of this generation, we've loaded up Football Manager 2018, and played through until 2030. That's four World Cups and three European Championships. Surely we can win something in the next 13 years? 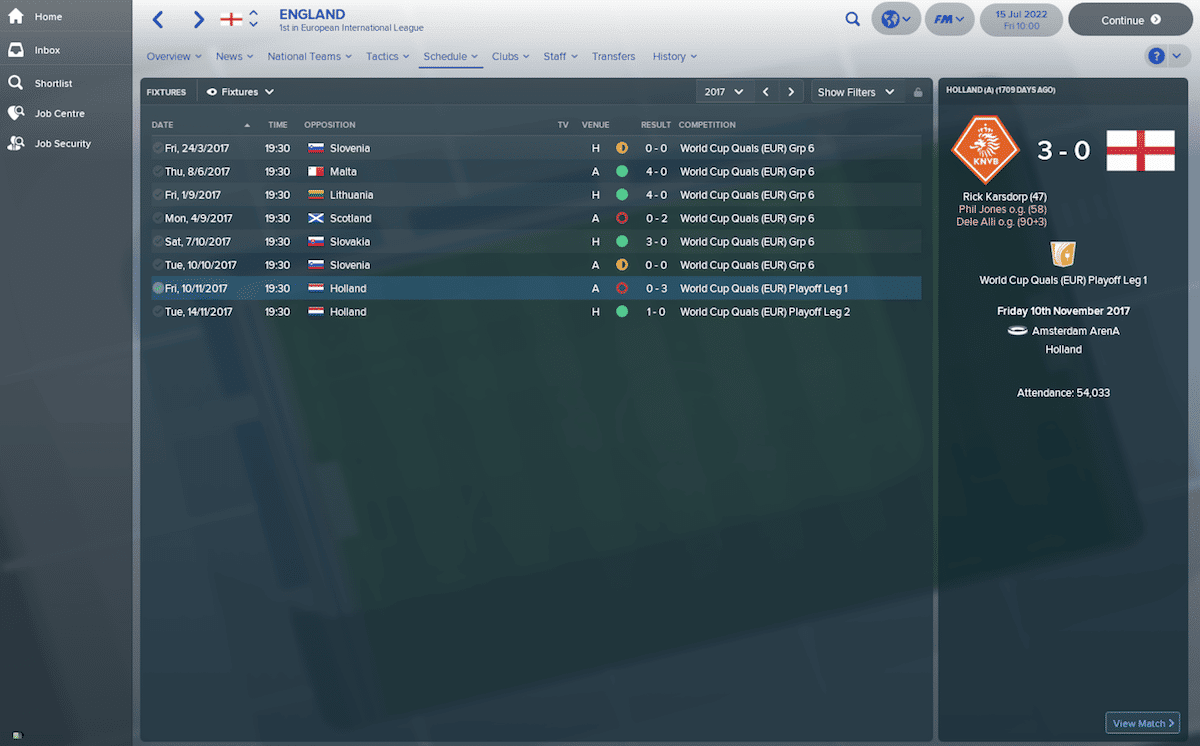 It's an inconspicuous start for Southgate's brave new side who somehow fail to reach Russia despite being left top of Group F in the summer of 2017. A 2-0 loss to Scotland at Hampden Park does the Three Lions' chances of qualifying little good and England can only draw away in Slovenia in their final game.

Those results set up a playoff against the Netherlands. And England are roundly beaten in the Netherlands, with hapless duo Phil Jones and Alli both scoring own goals in a 3-0 loss. A 1-0 victory at Wembley is scant consolation but Southgate clings onto his job. 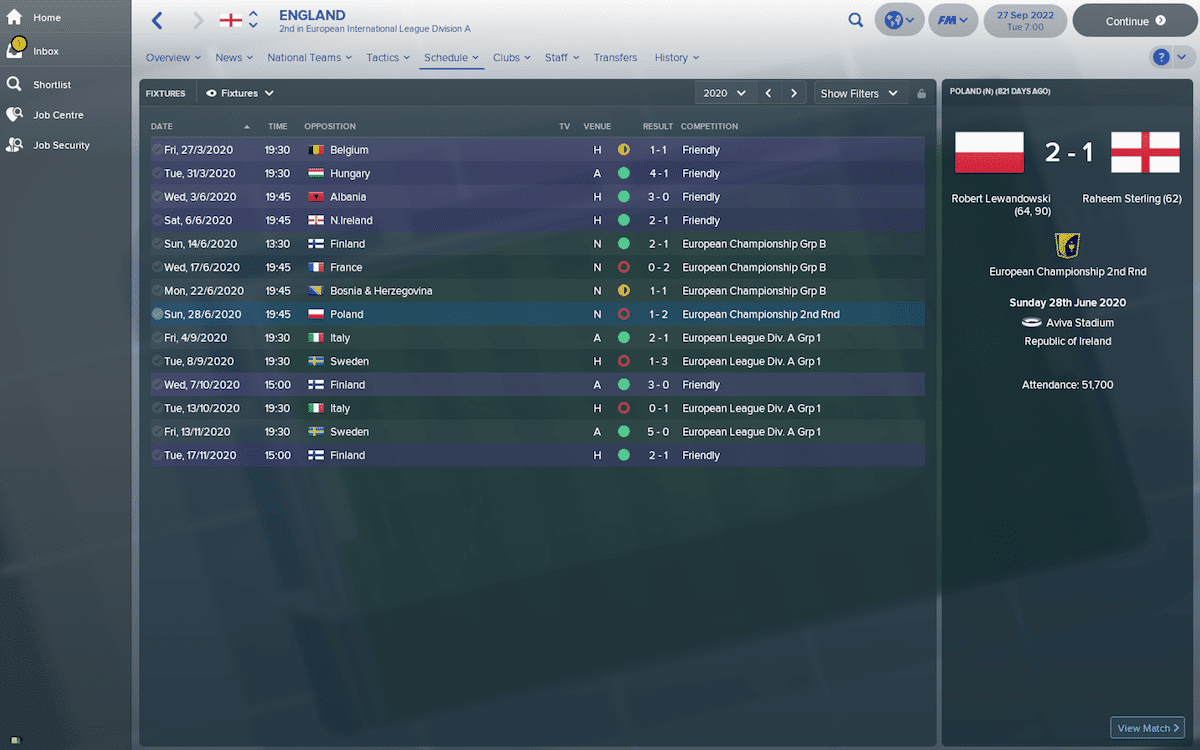 The first of Michel Platini's continental European Championships kick off with England qualifying which, after the shambles of the last World Cup, is a sign of progress.

England do, however, only sneak into round two in third place, escaping from a group which includes France, Bosnia & Herzegovina and Finland with four points.

But Poland forward Robert Lewandowski sends the Three Lions packing with a brace in a 2-1 win. Sterling had put England ahead but their lead lasted just two minutes.

A decent man until the end, Southgate quits his role and Garry Monk, who won the Championship with Middlesbrough and FA Cup with Everton, steps into the hot-seat. 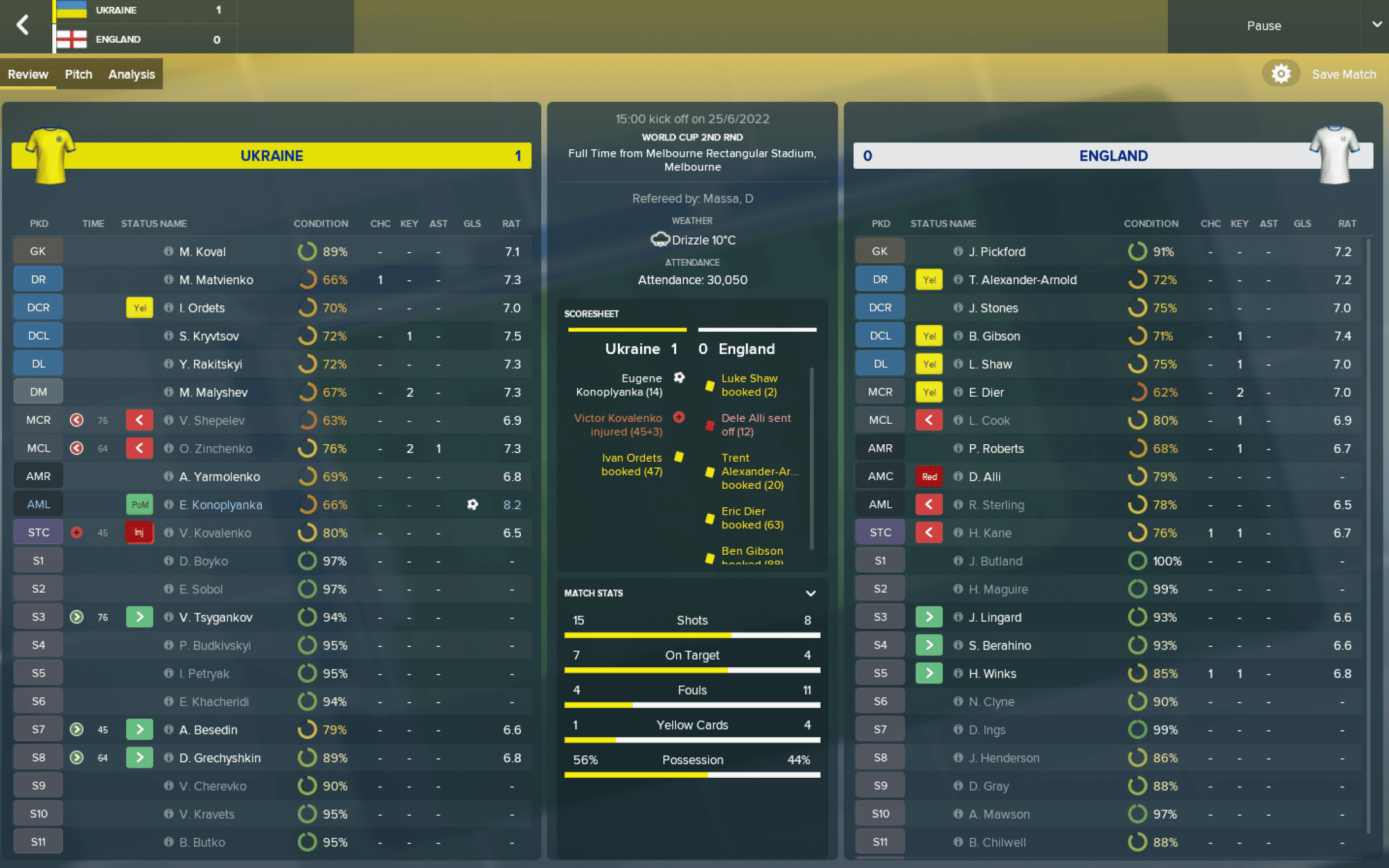 Football Manager, unlike real life, has seen sense. The 2022 World Cup is taking place in Qatar. But it should not, and the game reflects that with Australia stepping in as hosts.

Unfortunately, Monk's side do little better Down Under than a touring England cricket team and having made it out of a group which includes Paraguay (1-0), Mexico (5-1) and Australia (2-0) with nine points, they come up against Ukraine in round two. Lovely stuff.

Or not. Alli's dismissal after just 12 minutes is a setback from which England cannot recover and when Eugene Konoplyanka strikes two minutes later it's all over. Still, at least we got a scapegoat out of it.

It's a noticeably young side with Monk blooding Trent Alexander-Arnold, Patrick Roberts and Lewis Cook. But it's a case of new faces, same old woes. 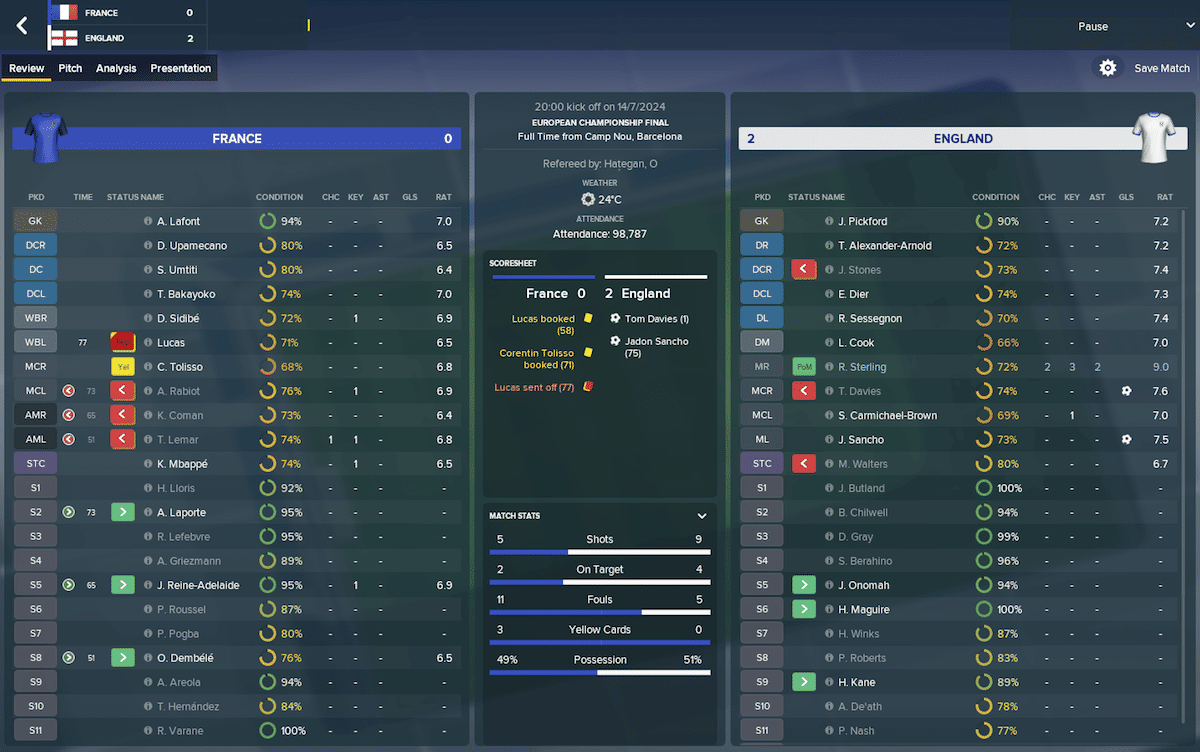 At last, glory! It's not the World Cup but 58 years after lifting the Jules Rimet, the England senior side have got their hands on silverware, beating France 2-0 in the final thanks to goals from Tom Davies and Jadon Sancho.

Monk's men negotiated a group stage which included previous victors Holland Ukraine, as well as runners-up Albania, though they won just one and drew the other two games.

Hungary were dispatched 2-0 in the second round with Russia beaten 1-0 in the quarter-finals.

England finally came up against decent opposition in the semi-finals with Spain – boasting David de Gea, Isco and Dani Ceballos – heading through 2-1 until regen Marc Walters bagged a 90th-minute equaliser. The Aston Villa forward then sent England to the final with an extra-time winner before sealing a £37million move to Watford. 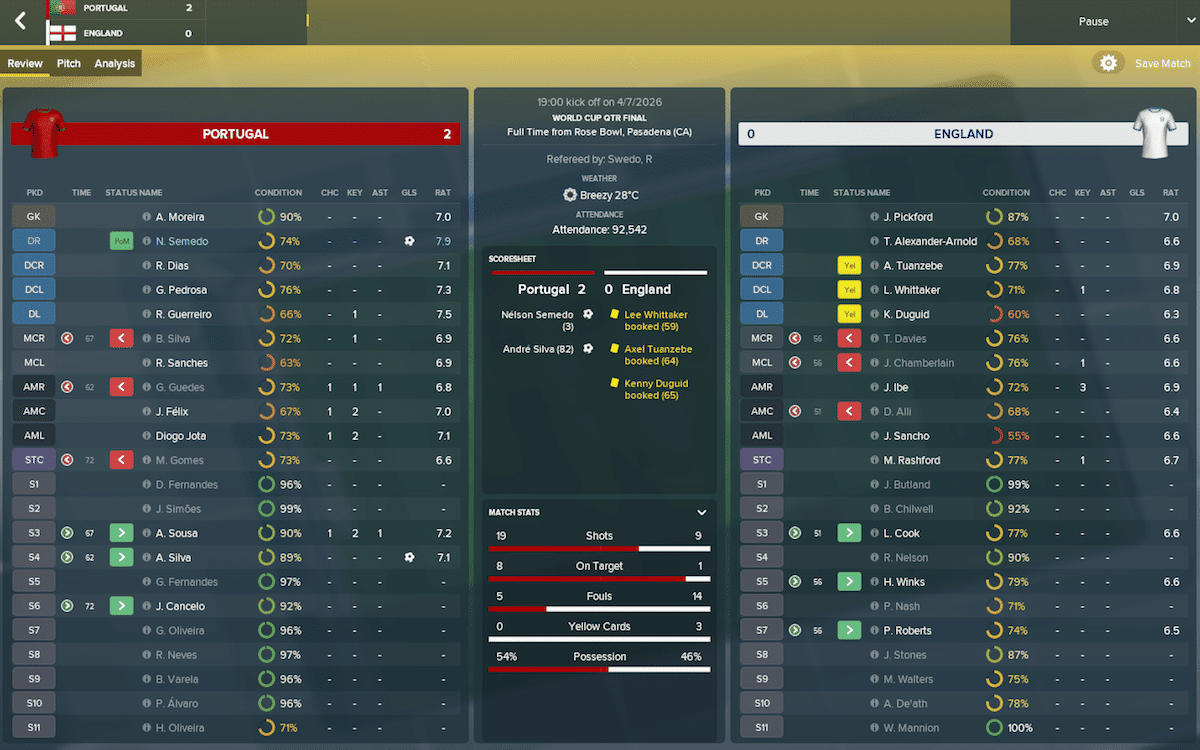 This is the England we know and love, beaten by Portugal in the quarters. Twenty years on from a penalty shoot-out defeat by the same opponents in Germany, Monk's men don't get as far this time and are beaten by goals from Nélson Semedo and Andre Silva in Pasadena, California.

Qualifying as runners-up in a group which included Belgium, Australia and Algeria, the Three Lions avenge defeat to Argentina at France 1998 by beating Los Albiceleste 2-1 in the second round.

It all looked very familiar when Giovani Lo Celso gave the South Americans a first-minute lead. But Cook, now mainstay of midfield for the Three Lions and Arsenal, levelled 15 minutes later to force extra time. Step forward Roberts – now of Chelsea – to win it in the last minute of extra time. That, though, was the high point. 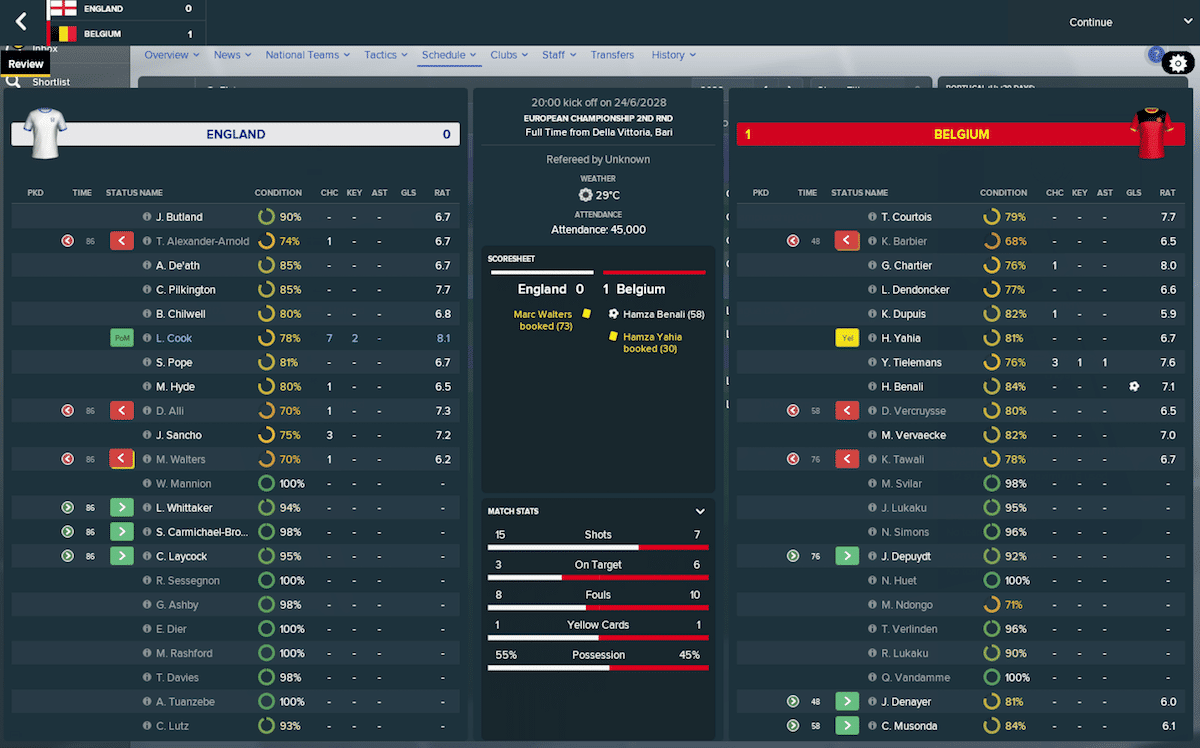 Two short years after winning the European Championships, Monk did the decent thing and quit after defeat at the World Cup. After scraping the barrel for English candidates already, the FA went big, went bold and went Italian, appointing former Tottenham, Barcelona and Belgium coach Carlo Ancelotti as Monk's successor.

And the former Chelsea coach's first tournament is the Euros in his homeland. But it does not go well and Belgium sneak past England 1-0 in the second round to ensure an early exit for the Three Lions.

Two days short of his second anniversary in the job, Ancelotti decides he's had enough too and is replaced by countryman Massimiliano Allegri, who since leaving Juventus in 2020 has been with Liverpool, Manchester City, Italy and Spain.

On home soil, boasting a coach with an impressive pedigree and looking to emulate the boys of '66. What could possibly go wrong?

Very little as it turns out. England qualify through their group with relative ease, beating Cameroon (3-0), Australia (2-0) and drawing with Serbia (2-2) to set up a second-round tie against France.

Les Bleus provide formidable opposition but a 19th-minute strike from Thomas Breitbach is enough to send the Three Lions into the last eight. Croatia lie in wait and it takes penalties but England, still with Alexander-Arnold, Ben Chilwell, Cook, Sancho and Alli, still doing a job for Spurs at 34, advance on penalties.

Nothing can go wrong now, right? England are flying and Brazil are up next in the semi-finals at Wembley. An 11th-minute goal from Michael Hyde settles the tie and Allegri's men are in the World Cup final with Argentina lying in wait. 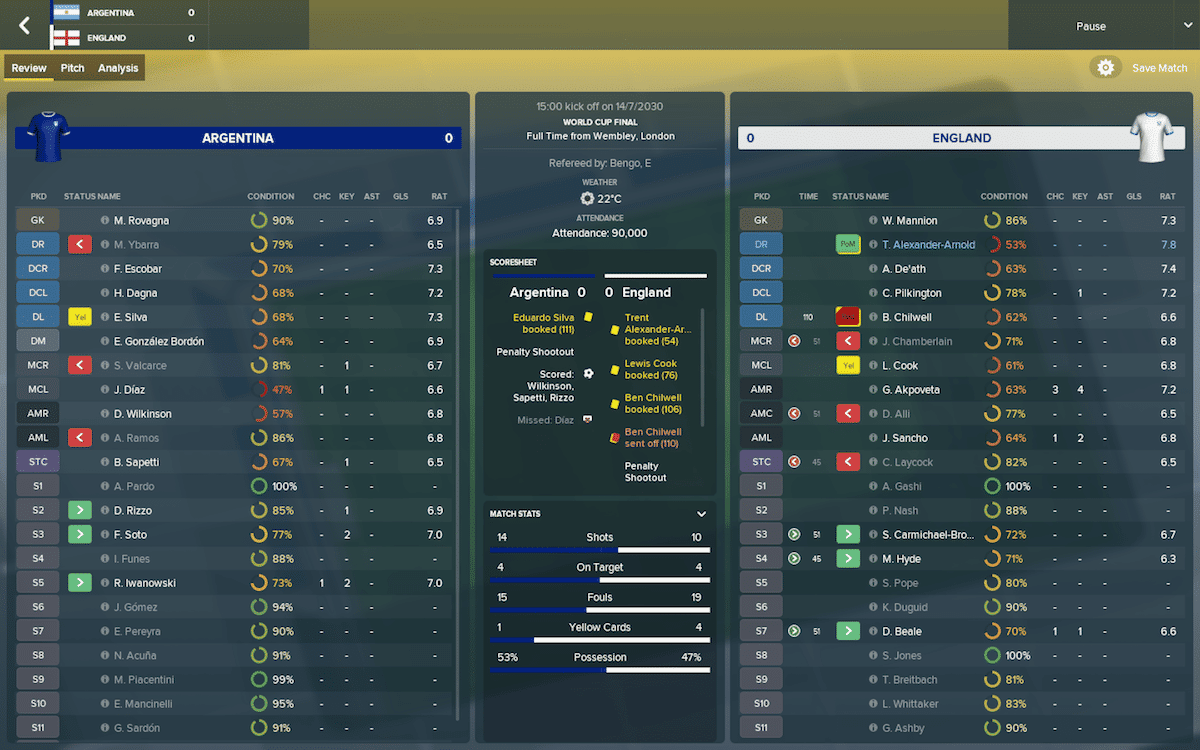 But it isn't to be. One hundred and twenty goalless minutes pass with both sides struggling to get efforts on target while Chilwell is sent off deep in extra time. And despite enjoying reasonable success from the spot in recent years, England lose on penalties 3-2 with Sancho, Alexander-Arnold and regen Dylan Beale destined for a Pizza Hut advert – maybe.