It is getting increasingly difficult for football clubs to find value in the transfer market. However, those that are smart – and Juventus are a great example of this – supplement big-money arrivals with free agent signings.

The Italian club have made this their hallmark over recent years. The likes of Dani Alves, Kingsley Coman, Paul Pogba and Andrea Pirlo all joined the Turin-based club for nothing and will this summer be joined by Aaron Ramsey from Arsenal.

But the Welshman isn't the only high-profile player whose current contract expires at the end of the season. And with that in mind, we have identified the big-name footballers who are set to become free agents this summer.

The Manchester United midfielder has become a key figure under Ole Gunnar Solskjær but can leave Old Trafford, unless a new contract is agreed, for nothing at the end of the current campaign.

There is interest on United's part to keep the Spaniard but their task may have become far harder after Ligue 1 giants Paris Saint-Germain registered their interest.

At the end of this season, the diminutive Spanish playmaker will have spent five-and-a-half years at Manchester United. However, there is a nagging feeling he has never flourished at Old Trafford.

In his two full seasons at Chelsea, he was twice named the club's player of the year. With United, Mata has constantly been in and out of the starting XI and when he has played, it's often been on the right of an attacking three instead of his favoured No.10 role.

Now 30 years old, Mata needs to leave United and find a club which allows his undoubted talent to shine through.

The floppy-haired Brazilian's second spell at Chelsea may come to an end this summer. The Blues only offer players over the age of 30 one-year contracts and, according to reports, Luiz would prefer a longer deal.

But with the Premier League club potentially unable to sign players this summer after being hit with a transfer ban, the centre-back may end up getting his wish and remain at Stamford Bridge for another couple of seasons.

The Liverpool striker has managed to stay relatively injury free this season, but that is mainly because he hasn't started too many matches for the Reds; just seven across all competitions.

When fit and focused, there are few better finishers in the Premier League than Sturridge. And that is why, despite his injury woes in recent years, he isn't likely to be short of potential suitors when his contract comes to an end in June.

There is an element of confusion over the Liverpool midfielder's contract, with certain reports claiming his deal at Anfield expires in the summer of 2020. But more reputable sources state the 33-year-old walk away for nothing at the end of the season.

Given Milner has made 26 starts for the Reds in all competitions this term, including in their second leg Champions League last-16 win over Bayern Munich, it would be something of a surprise to see him leave Liverpool with the club putting up much of a fight.

The 33-year-old remains Chelsea's club captain but has played just one Premier League game all season and hasn't featured in a matchday squad at all in 2019.

He was linked with a move to Fulham in January but reportedly turned down the offer from the west London club. There will be several sides interested in Cahill in the summer, who is likely to get one last move to a Premier League side.

The 32-year-old remains one of the most underappreciated players in Europe, and Chelsea's loss could very much be another club's game this summer.

Giroud, who played a key non-goalscoring role in France's 2018 World Cup win, has even admitted he would be happy to return to Ligue 1 if it meant guaranteed minutes.

“I’m not afraid to go down a level to have more playing time. It could be I end my career in France,” he told French radio station RTL during the international break.

The Manchester City captain's deal – like the other players on this list – expires on June 30. But Pep Guardiola has already stated the Belgian, who has been with the club since 2008, will be handed a new contract if he wants it.

“We are talking about that,” the City boss told reporters in January. “I would like it. He's our captain, 11 years here.”

The last 18 months haven't been, from a footballing standpoint, particularly enjoyable for the Spanish striker. He has played second fiddle to Harry Kane at Tottenham Hotspur, and even when the England international has been ruled out hasn't especially started.

It's why he is set to depart Spurs in the summer. There is already interest in Llorente, too, with Aitor Elizegi, the president of the striker's former side, Athletic Club, revealing they're monitoring his situation.

The Liverpool full-back is another Spaniard set to leave the Premier League this summer. Moreno lost his place in the Reds starting XI last season to Andrew Robertson and hasn't been able to win it back.

At 26 years old, he is unlikely to be short of interest. Barcelona, for instance, have been linked with a move for the left-back who would provide competition for Jordi Alba.

The French midfielder decided in January that he would leave Paris Saint-Germain this summer and has since been exiled from the Ligue 1 leader's first-team squad.

“Adrien is a prisoner,” Veronique Rabiot, the player's mother and agent, told L'Equipe. “He is a hostage at PSG. Soon it will be dry bread, water and a dungeon.

“This environment is cruel. A footballer is made to play, not to stay in the closet. Adrien has not played since December, and probably won't until June.”

Barcelona were expected to sign Rabiot this summer but their interest has cooled. A number of other European sides remain keen, with Manchester United touted as a potential destination.

The Italian international joined Marseille in January on a six-month contract and has quickly impressed, scoring five goals in his nine appearances for the club.

Given his form, it's likely the Ligue 1 side will offer Balotelli an extended contract. However, you wouldn't bet against the striker from returning to Serie A if the right offer is on the table.

While the Brazilian full-back hasn't quite fulfilled the potential he showed during his early months at Manchester United, he is still a competent full-back and one who has made over 100 appearances for Lyon.

He is expected to leave the club this summer, though and would prove a smart pick up for sides across Europe.

The Uruguayan defender has been vital to Atlético Madrid's rise under Diego Simeone and it is certainly a surprise that he is expected to walk away from the Wanda Metropolitano this summer.

It perhaps, though, signifies a changing of the guard at Atleti. Godín, however, won't be without a club for long and he is expected to sign with Serie A side Inter for the 2019/20 campaign.

The Brazilian full-back is another Atléti stalwart expected to leave the club this summer. Luís has publicly stated he is happy to remain in Madrid but wants a two- or three-year contract.

Atlético are only willing to offer the 33-year-old a one-year deal, which is why his departure appears likely. Luís is a reported Barcelona transfer target, with the La Liga leaders viewing him as another potential deputy for Alba. 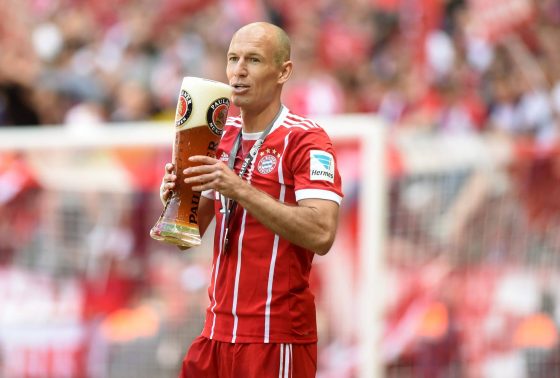 After more than 300 games, 140 goals and ten years in Bavaria, the Dutch winger's time at Bayern Munich is set to come to an end this summer.

Now 35 years old, Robben's blistering pace has faded but his signature move – cut onto his left foot from the right and whip the ball into the far corner – remains. A return to Holland has been mooted, with former PSV a potential destination.

After an injury-ravaged final two years at Arsenal, during which the midfielder almost had his foot amputated, Cazorla returned to Spain last summer and joined Villarreal.

The La Liga side haven't enjoyed a stellar campaign – they are currently battling relegation – but Cazorla has managed to play 35 games for the club in all competitions.

His one-year deal expires this summer and, even at 34 years old, his quality would prove a valuable asset for any side.