It might only be June but already the Champions League qualifying rounds are under way. Never before have either of these sides gone beyond this first stage of the qualification. This year, one definitely will but who? Find out with our Folgore vs Prishtina match preview with free tips, predictions and odds mentioned along the way.

Folgore vs Prishtina: The tips you need

Prishtina to go marching on

It would be an exaggeration to suggest that Folgore are in poor form heading into this match but they've certainly dipped from the performance levels they were showing with one win, one loss and three draws from their last five compared to four wins and a draw in their five prior to that. Prishtina meanwhile might have recorded the same number of losses in their last 10 (one); with eight wins in that time though, they'll be confident of getting a win. We think they'll get it too.

Several goals to hit the net

Folgore had a 0-0 goal last time out against La Fiorita but such a drab affair isn't a regular occurrence; seven of their last 10 matches have seen a minimum of three goals. Prishtina aren't strangers to high scoring matches either with eight of their last 10 surpassing the 2.5 mark as well. In terms of the average number of goals each team have witnessed in that time Prishtina sit on 3.5 with Folgore at 3.3.

Our second prediction focuses on the number of goals the teams have seen across their last 10 fixtures. What it doesn't highlight is who scores all the goals. There is no denying that Folgore and Prishtina both know where the net is; Prishtina have hit 23 goals across those 10. Folgore have scored 24. The other key thing to note is that with the duo seeing a total of 35 and 33 goals respectively in their 10 prior matches neither defence is particularly solid; they can only boast six clean sheets between them from those 20 matches.

Folgore vs Prishtina: The best odds for the big game

The best odds will show here when available

Prishtina to come out on top in entertaining game

Both Folgore and Prishtina come into what is one of the biggest matches they've ever played with just one defeat each in their last 10 matches. Despite that, it will be Folgore who arrive with more trepidation having struggled to convert draws into wins of late. The Sammarinese side have talent at both ends of the pitch though, which will be key. Imre Badalassi, who is set to leave, could have one final hurrah after banging 14 goals in last season whilst Roberto Rosini is their main centre back. Prishtina can offer a goal threat from all over the pitch though and will carry a real threat. Oto John and Leo Kryeziu have 19 goals between them at the top of the pitch with right back Besnik Krasniqi hitting 10 goals across the 2020/21 campaign. 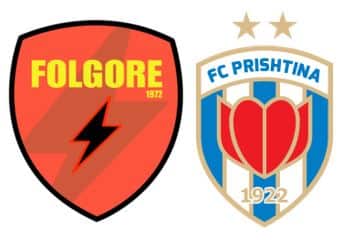