For the best part of a decade now, Lionel Messi and Cristiano Ronaldo have battled it out to be considered the best football player in the world. The last nine Ballon d’Ors have been shared by the duo with the Argentine currently ahead by one.

The pair are now both coming into the twilight of their careers: Messi will be 31 during the 2018 World Cup and Ronaldo turns 33 years old in February. With Juventus legend Gianluigi Buffon calling it a day at the end of the season it’s left us at Football Whispers wondering who will take up the mantle when the pair do decide to hang up their boots.

Not just at club level but in terms of which players will be the best in the world after the duo hang up their capes and return to normal life as mere mortals.

Using Football Manager 2018, we’ve taken a look at the footballing world in 2022 – five seasons into the game – to help build a picture of what life will be like as Messi and Ronaldo start to wind down.

What’s happened in the world of football?

There’s a new superpower in world football. Belgium won the 2018 and the 2022 World Cup, as well as reaching the final of Euro 2020 before losing on penalties to France. The likes of Kevin de Bruyne, Eden Hazard and Romelu Lukaku all finally delivered for their country but they’re coming to the end of their careers too now and England are the team to watch.

In terms of club football, we’ll start with Real Madrid. Zinédine Zidane is still at the helm and he’s turned Ronaldo into more of a striker. He’s still finding the back of the net on a regular basis and has scored over 15 goals in the league over the past five seasons.

However, he’s not featuring in as many matches and Los Blancos parted with £89million to sign Roberto Firmino from Liverpool in the summer of 2021.

The Brazilian started more games than Ronaldo during the 2021/22 season and even finished with more goals – 25 in total.

It was slightly different over at Barcelona. Pep Guardiola returned to the Nou Camp and slowly but surely transitioned Messi from an attacking force into more of a deep-lying playmaker.

He was still managing to find the back of the net, but nine during the 2021/22 campaign is a drop-off from the 40-plus people have come to expect from the legendary Argentine.

Barcelona replaced him on the right side of their attack with Leon Bailey. The Jamaican arrived from Bayer Leverkusen in a deal worth £50million and he was tasked with providing Luis Suárez – yes, he’s still leading the line at the Camp Nou – with the ammunition to challenge Real Madrid for the La Liga crown.

Beside Messi, at the heart of the midfield was Franck Kessié and Saúl Ñíguez – the pair arrived for a combined £134million during the summer of 2020.

What's remarkable, though, despite the duo slowing down, they won three of the five Ballon d'Ors. Only Neymar got in on the act and his first was during the 2019/20 season. He's going to be hopeful that he doesn't have to wait until then in real life to get his hands on the award after his £200million move to Paris Saint-Germain.

To help understand why these players won the Ballon d'Or we've taken a look at which of the teams caught the eye in both the Champions League and the Europa League over the past five seasons.

Manchester City and Barcelona are the only two clubs to make more than one appearance in the Champions League final. The Spanish side won on their two trips to the final, whereas the Premier League club lost on both occasions.

Liverpool, Chelsea and Atlético Madrid make up the other three winners during the simulation. What's interesting is in the five finals, England had representatives in four – a sign that the Premier League will once again become a dominant force in Europe?

It's a similar story in the Europa League, with English clubs winning four of the five finals and finishing as runners-up in the final they lost.

Tottenham Hotspur became somewhat of a specialist in this competition, winning two of the last three, and Liverpool added a Europa League to the Champions League they won two seasons prior.

Bizarrely, Neymar won the Ballon d'Or the same season PSG finished as runners-up in the Europa League. It's unlikely it would happen in the real world, with centre stage often being given to those who perform in Europe's elite competition.

The Most Valuable Players in 2022

Before we get into the top ten list, there are a few players who deserve an honourable mention.

Francisco Geraldes is an attacking midfielder who plays for Rio Ave on loan from Sporting Lisbon in the real world. He's made just four appearances for his parent club since making his debut back in 2015.

In the simulation he moved to Juventus at the beginning of the 2019/20 season for £25million and was involved in 13 goals in 29 appearances. The following season he was involved in 14 goals – nine goals and five assists – but this form convinced PSG into signing him for £49million. After an impressive season in Ligue 1 he's now valued at £67million.

Trent Alexander-Arnold is another who deserves to be acknowledged. The 23-year-old right-back is the captain of Liverpool and England, he lifted the Europa League trophy playing as a defensive midfielder and he's currently valued at £69million – £5million more than Philippe Coutinho who is still plying his trade at Anfield. 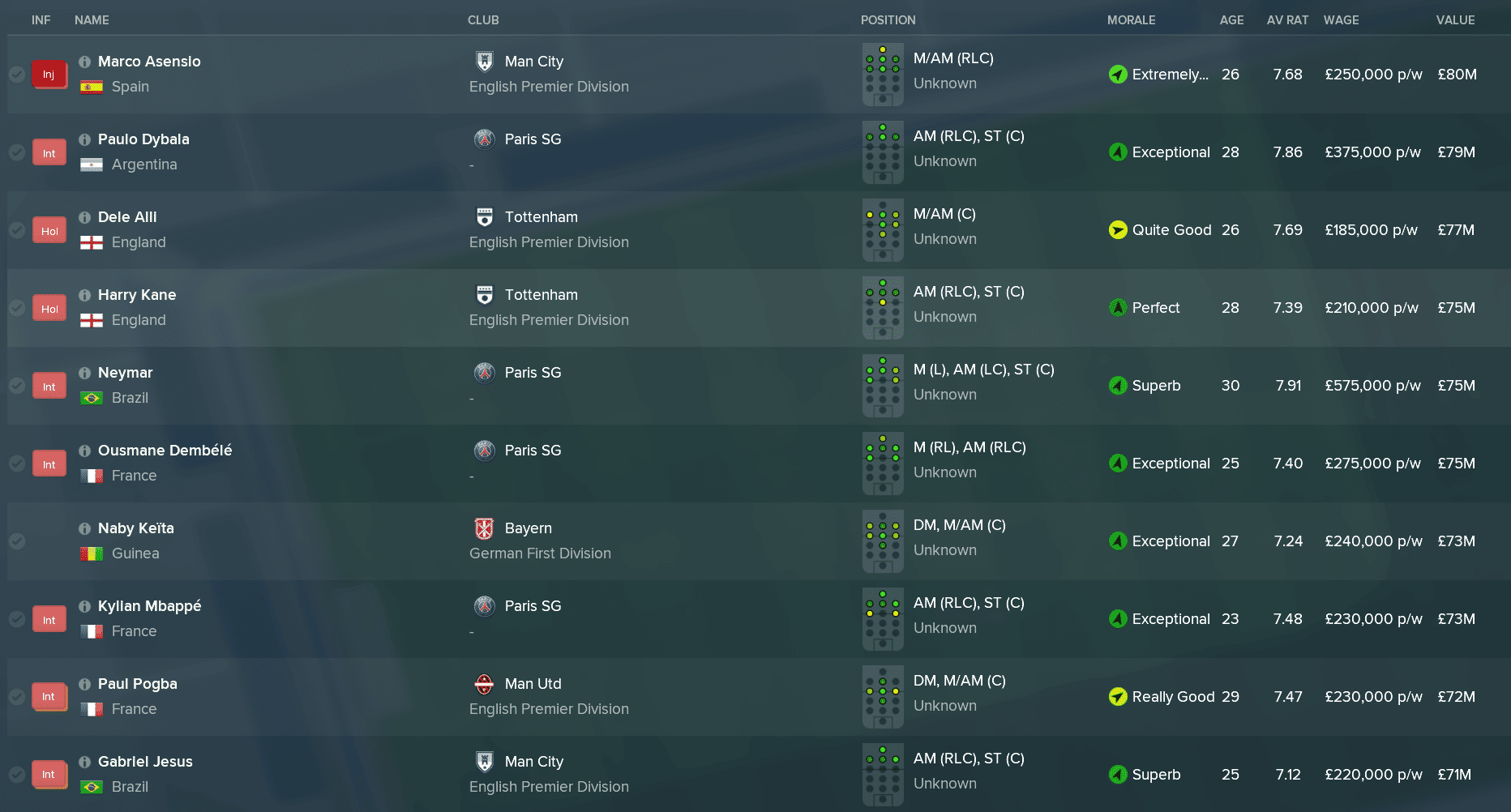 Marco Asensio is the highest valued player on the game. He moved from Real Madrid to Manchester City at the start of the 2021/22 season in a deal worth £124million if you include all of the potential add-ons. He helped City to the Premier League title as well as a runners-up medal in the Champions League, and was involved in 32 goals in 53 appearances.

Paulo Dybala and Ousmane Dembélé joined the revolution at PSG. The pair cost a combined £240million to go along with Neymar and Kylian Mbappé as the most expensive strike force ever assembled. Just £6million separate the quartet when looking at valuations. Having seen the attack they're able to call upon, it is a wonder why PSG haven't won any European trophies.

Interestingly, Harry Kane and Dele Alli come in at third and fourth on the list respectively. The combined price for the English duo is £182million. Have they been priced out of moves elsewhere or are they content with Europa League domination?

Naby Keïta is now at Bayern Munich having joined the Bavarian giants in the summer of 2020. He spent two seasons with Liverpool and lifted the Champions League before his £92million move back to Germany.

He's since become captain of the club finished the season with 22 assists – it's to be expected when you have Álvaro Morata and Pietro Pellegri ahead of you.

Paul Pogba is still the man at Old Trafford. He's the captain there and is playing behind Lukaku as a No.10. The Frenchman is tasked with being the creative force and finished the 2021/22 season having been involved in 24 goals in all competitions. Barcelona had £121million bid rejected for him before they moved on to Kessié.

Gabriel Jesus is tenth on the list. The City squad is littered with stars but it's the Brazilian striker who is the pick of the bunch after Asensio. He's the spearhead of the attack and finished with 47 goals in all competitions during their run to the Champions League final.

It may only be a computer game but this seems fairly accurate given the way prices are going in the current market. It varies from save to save so have you found these players tend to catch the eye as the game progresses? Be sure to tweet us with screenshots of these players in your saves.