When the Premier League burst onto the scene in 1992, against a backdrop of glitz, glamour and go-go girls, few would have expected a side from sleepy Norfolk to hold their own amongst the big boys of the game who had instigated the recent big-money breakaway. But that’s just what happened as unfancied Norwich City led the way in those early stages of this new Sky era. This was to be a, “whole new ball game,” or so we were told, and City were most definitely on the ball.

During those early discussions about the foundation of a new Premier League, which was to break free from the shackles of the Football League and allow the most successful teams in the land to have greater control over their TV revenue, Norwich City probably weren't much of a bargaining chip when Rick Parry and company were looking to sell their shiny new product to the highest bidder.

Apart from a couple of reasonably successful seasons during the 1980s, which saw the Canaries lift the Milk Cup and secure a couple of decent finishes in the old First Division, Norwich were everything that the Premier League was not. And despite Wembley glory and several heady league finishes, they were denied the chance of playing in Europe due to the ban on English clubs, which came about as a result of the awful scenes at Heysel; meaning that, to many, they were something of an unknown quantity.

Norwich had been useful performers at best but the team from Carrow Road couldn’t have been further removed from the razzamatazz of the newly formed Premier League back in 1992. Their small ground had barely changed in 80 years while most other stadia around the country were becoming unrecognisable due to the implications of the Taylor Report, which had called for all seater arenas following the Hillsborough disaster in 1989.

To make things worse, City, who had only just escaped relegation the previous season, lost their manager, Dave Stringer, who had resigned at the end of the previous campaign, not to mention top striker Robert Fleck, who had joined Chelsea in a record £2.2 million move. To say things looked far from optimistic as the new Premier League era dawned would be something of an understatement.

Taking over the reins was 46-year-old Mike Walker, a former goalkeeper in the lower leagues with little experience of managing in the top flight and a personality that resembled an insurance clerk rather than a football manager. Walker was something of a shrinking violet, in public at least, who had been made reserve team coach in 1987 after being sacked as manager at Fourth Division Colchester United.

When it came to transfers, things didn’t look overly exciting on that front either, with the only recruits joining the ranks that summer being journeyman Gary Megson, Manchester United reject Mark Robbins and something of an unknown entity in Efan Ekoku, coming-in from Bournemouth for £500,000.

Their back-four included Ian Butterworth and John Polston, while Welsh international Mark Bowen was the only recognisable name in front of goalkeeper Bryan Gunn. The midfield consisted of Jeremy Goss and Ian Crook, while Ruel Fox and David Phillips provided the pace down the flanks. Up front, new signing Robins, who had been credited with saving Alex Ferguson’s job, was joined by Rob Newman. 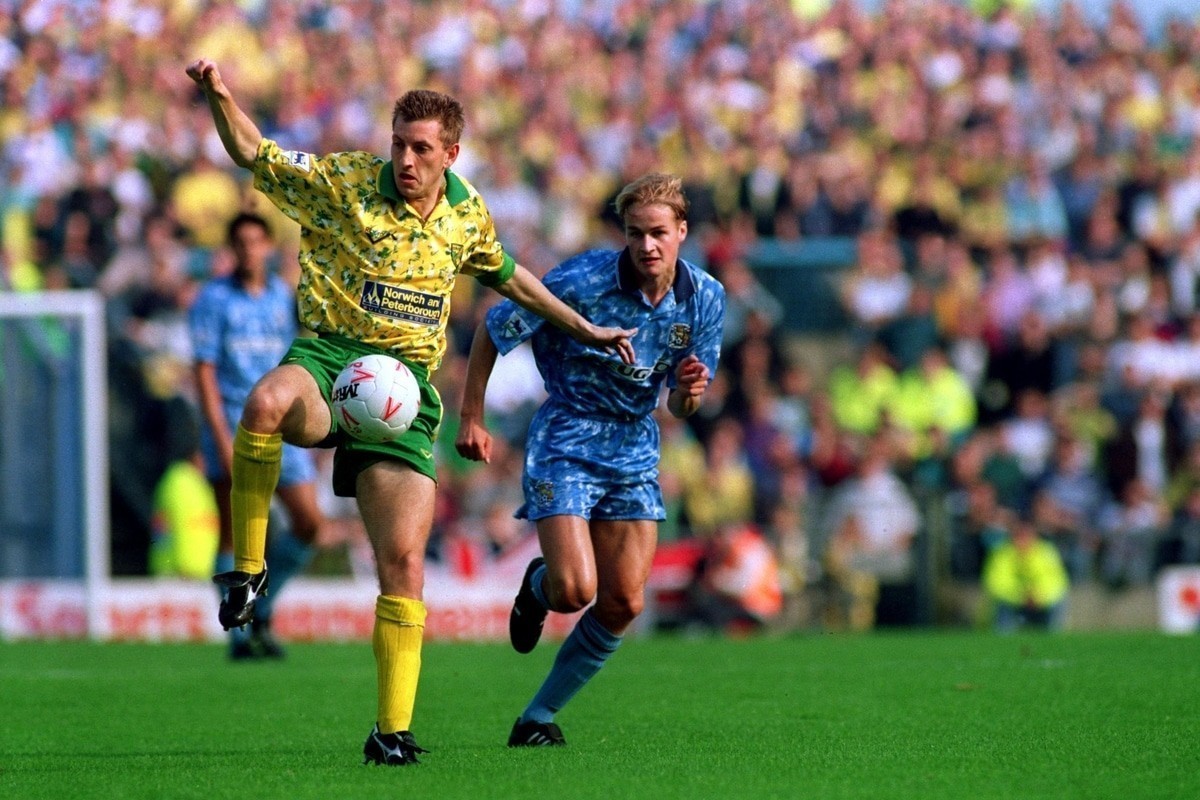 Though nobody knew it at the time, and against all odds and expectations, Mike Walker would somehow galvanise this team of cast-offs and unknowns, and build a side that was to shock football in those early days of the Premier League; never was this illustrated better than on the opening day of that campaign when the Canaries travelled to Highbury to face Arsenal.

Norwich soon found themselves 2-0 behind before the break, thanks to goals from Steve Bould and Kevin Campbell; but the introduction of Mark Robins would be pivital and not for the first time that season. His stooping header from a David Phillips free kick halved the deficit, before Phillips pulled Norwich level after David Seaman made a mess of a cross from the right. Astonishingly, Ruel Fox then put Norwich ahead before Robins completed the most unlikely of comebacks to win the game 4-2.

That win at Arsenal would be something of a blue print for Norwich’s success that season, as they often went about making things hard for themselves while also gaining points from losing positions. Four days later they again came from behind, this time beating Chelsea 2-1 with Robins scoring a brilliant goal with the outside of his boot. A point from the next two games was followed by five wins consecutive wins that launched them to the top of the table.

Much of this success had come about due to Mike Walker’s gung-ho approach to playing the game. He may have appeared like a mild mannered man, but the way his side played on the field was anything but. Talking about that comeback at Arsenal. Jeremy Goss said in his autobiography: “Yes, we were 2-0 down and some of the lads might even have thought it would be a case of damage limitation in the second half. But that wasn’t Mike Walker’s way.”

Norwich continued to surprise all around them in September. Mark Robins scored late on against Southampton to grab three points before heading to Stamford Bridge to face Chelsea once more. Two goals down early on, Norwich again forced their way back into the game with the help of a couple of goalkeeping howlers from Dave Beasant, before a David Phillips’ drive somehow found its way into the net. Norwich had done it again.

The beginning of October saw Norwich knocked off top spot in the Premiership in monumental fashion after a 7-1 thrashing at Blackburn Rovers; as the most promising young player around, Alan Shearer, made yet another case for being the top striker in the land. But as always with Norwich that season, the way they responded to a damaging defeat would be key, and immediately after that humiliation at Blackburn they won five of their next seven matches.

Incredibly, two months after the 7-1 defeat at Ewood Park and following an away win at Aston Villa, they were now eight points clear of second-placed Blackburn and quickly winning over a new armchair audience thanks to their attractive style of play. Although few would have predicted it, Mike Walker’s team, which contained few household names, would for a short while, become the best side in the land.

As the season entered the Christmas period, a time which traditionally sorts the also-rans from the title contenders, Norwich showed little sign of faltering. But that was before they travelled to another side who had title ambitions of their own due to the arrival of a talisman who would ultimately change the fortunes of the club in the years that followed.

When City arrived at Old Trafford in December, Manchester United were just finding their feet after a poor start to the season having blown the title the previous term. One reason for their change in fortunes was the arrival of Eric Cantona from rivals Leeds United — a signing which instilled a new sense of belief and direction to a side who had been drifting aimlessly up until now.

Cantona was the best player on the pitch that day, pulling the strings and conducting the play like a composer with a baton, as United triumphed thanks to a poor mistake by Daryl Sutch allowed Mark Hughes to score the only goal. Norwich took the defeat badly and didn’t score for the next four games, winning just six of their next 16 matches. Yet their good start to the season meant that, come the spring, they were still in with a shout of the title.

At the end of March, Norwich faced two crucial games at Carrow Road against title rivals Aston Villa and  Manchester United — both within the space of just 13 days. These were to be the games that would make or break their season, and for a time it looked like the unthinkable might just happen.

A 1-0 win against Villa put Norwich back to the top of the table with just six games remaining and ahead of the visit of United, expectations were high as the men from Old Trafford had not won in four matches. A Canaries win and they would be five points clear at the top. Lose and they would be overtaken by United in what would be a huge blow to their title charge. 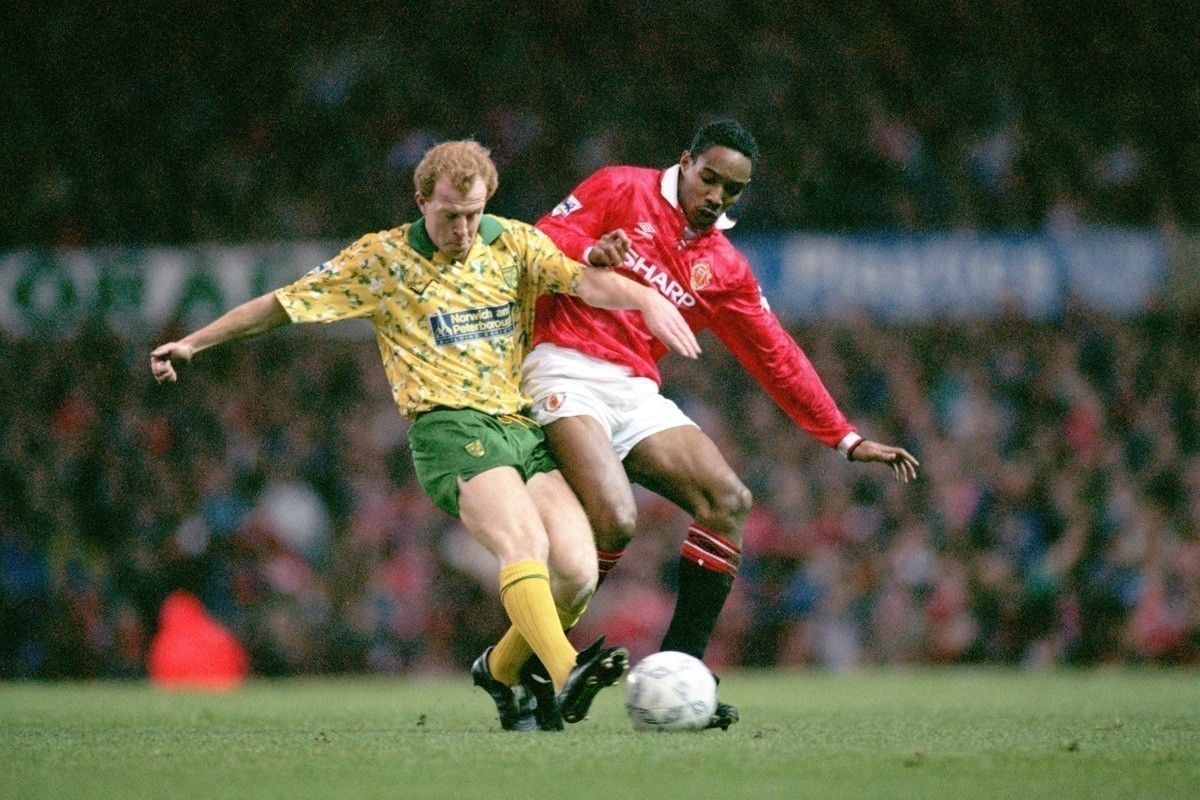 As it turned out, Norwich simply couldn’t cope with a United side desperate to secure their first championship since 1967, and were blown away in the first 20 minutes thanks to goals from Ryan Giggs, Andrei Kanchelskis and Cantona. It was a classic United display and would epitomize the way they would play for the rest of the decade, quickly turning defence into attack and cutting through opponents like a hot knife through butter; Norwich simply couldn't cope.

A 5-1 defeat to West Ham the following week ended any lingering hopes Norwich had of winning the league while United won seven games in a row to cement the title while Aston Villa ran them close. A draw to already relegated Middlesbrough on the final game of the season did, however, secure third place ahead of big spending Blackburn – their highest finish to date, finally earning them a shot at European football the following season.

Having dared to dream for much of the season and providing a whole new football audience with a reason, not just to tune-in to this “whole new ball game,” but to pay handsomely for the privilege, Norwich had run their course.

In the years that have followed since that first ever Premier League season, there have been a handful of sides outside of the so-called big guns who have run with the pack and given hope to those for which success is not expected. But Norwich City, complete with their garish yellow and green kit, team of misfits and awkward looking manager, can proudly say they were the first.