It’s February 6, 1958 and the wreckage of a stricken airliner lies at the end of a Munich runway, still smouldering from a devastating crash which would claim the lives of 23 people. It was, of course, an enormous tragedy by anyone's measure, but on the plane which was destined not to leave Munich were a group of talented young footballers who touched the nation.

The Busby Babes, as they were known, had high hopes of becoming the first English club to lift European silverware and were also going strong in the league and FA Cup, but those hopes were snuffed out, just like the lives of eight of their finest players, in a few agonising moments which would shape the history of the club forever more.

Under their influential Scottish manager, Matt Busby, Manchester United became one of the most brilliant and exciting football teams in England, and had been to Yugoslavia to play in the relatively new European Cup against Red Star Belgrade. Following a creditable 3-3 draw United progressed to the semi-finals of the competition thanks to a 5-4 aggregate victory.

A cocktail party for the players was held at the British Embassy before the players, squad members and press departed Belgrade for Manchester the next day and, despite take off being delayed for an hour after winger Johnny Berry lost his passport, spirits were still high. Tragically, though, that flight would never reach its final destination.

The plane, a BEA Airspeed AS-57 Ambassador, makes a scheduled stop in Munich to refuel, but by this time the airport had become shrouded in low cloud and snow, meaning the pilot, Captain James Thain, has to use the anti-icing equipment on the wings for the final descent. Once on the ground all seems normal as the party disembarks for refreshments in the terminal building and some of the players even take the opportunity to enjoy an impromptu snowball fight to pass the time.

At 2:20pm, just over an hour after arrival, the plane is cleared for take-off once again. However, a strange sound coming from the engine causes Captain Thain and his co-pilot, Captain Kenneth Rayment, to return to the terminal building. The pair decide to try again, but the second take-off is aborted for the same reason, with Captain Thain explaining to his passengers that a “slight engine fault” will require them to make a routine check. 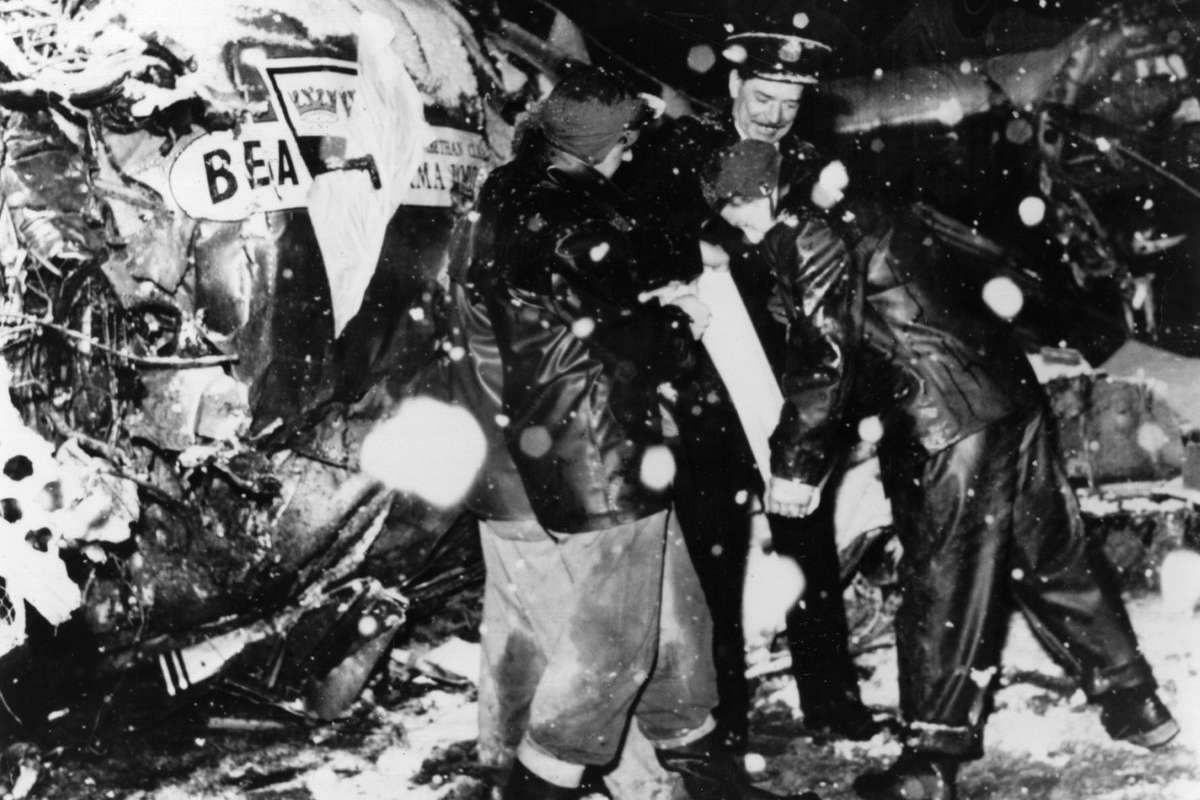 By now most of the party expect to stay the night in Munich as the weather got worse and the prospect of a successful takeoff seems unlikely. Even Duncan Edwards sends a telegram to his landlady saying: “All flights cancelled. Flying home tomorrow.”

But things aren't that simple. United are under a certain amount of pressure to fulfil their fixture against Wolves at the weekend as the Football League are not happy about them competing in what they saw as something of a distraction from domestic obligations rather than a pioneering tournament.

Alan Hardaker, the Football League secretary at the time, had denied Chelsea’s participation in the tournament two years before and was very much of the thought that not competing in the fledgling tournament was best for English football.

United and Busby had pushed the boundaries by attempting to play in Europe while not letting it affect their league programme, but if they are to fulfil their league fixtures, which they will have to do if they are to avoid proving Hardaker right, they must get back to Manchester as soon as possible.

After two failed take-off attempts, the players are already nervous when they re-board the plane. Tommy Taylor, Mark Jones, Eddie Colman and Duncan Edwards even move to the rear of the plane in the belief that they will be safer there if the plane doesn't make it.

At just after 3pm a third take off is attempted but by now the runway is covered with slush. The plane fails to gain height before crashing through a wire fence and then into a house which immediately catches fire. A tree also shatters one whole side of the fuselage and if that wasn’t bad enough, part of the aircraft hits a wooden hut, causing a nearby fuel transporter to explode.

“As we accelerated down the runway, something told me we were not going to make it,” remembers survivor Bill Foulkes. “I strapped myself in really tight, I knew we were going to crash.

The crash claimed 23 lives in total. Seven players died at the scene, including Taylor, Jones and Coleman who had moved seats. The plane’s co-pilot was also killed as well as members of the press pack, such as former Manchester City goalkeeper Frank Swift who had travelled with the United squad to the game.

Duncan Edwards passed-away in hospital a fortnight later while Johnny Berry and Jackie Blanchflower were so badly hurt that they would never play again. Matt Busby would spend two months in hospital, while many others, including Bobby Charlton, were badly injured but would eventually recover. 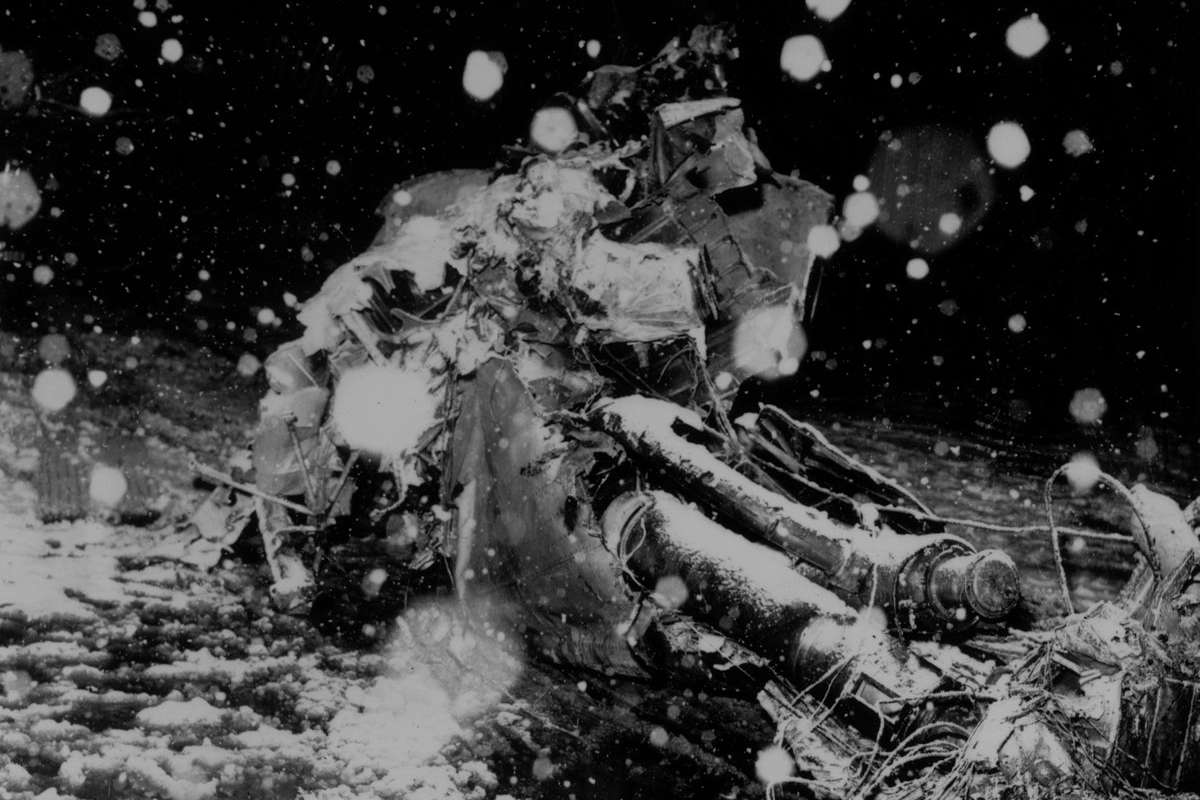 “I didn’t know where I was. I was still sitting in my seat – which had somehow been ripped from underneath the plane,” explained Bobby Charlton some years later. “I thought I’d just closed my eyes. Afterwards, Harry Gregg and Bill Foulkes said I’d been unconscious for quarter of an hour.”

United ‘keeper Harry Gregg remembers the moments immediately after the crash: “There was no screaming, no sounds, only the terrible shearing of metal,” he said.

“Something cracked my skull like a hard-boiled egg. I was hit again at the front. The salty taste of blood was in my mouth. I was afraid to put my hands to my head.”

The news caused huge consternation, not just in Manchester, where all ticket sales were suspended and crowds gathered at United’s ground at Old Trafford to get the latest information, but around the world.

Messages of condolence arrived from far and wide, including one from the Yugoslavian dictator, Marshal Tito, while at a concert in Sheffield the Hallé Orchestra of Manchester played Elgar’s ‘Nimrod’ and the audience spontaneously stood throughout the performance as a mark of respect.

The following day the bodies of those who died were flown home and lay overnight in the gym at Old Trafford while thousands of people from across the country turned out in the winter cold to line the streets for the funerals. Memorial services are held and a two minutes' silence is observed at matches everywhere that weekend.

The attention now turned to those still in the Rechts der Isa hospital in Munich, particularly United’s manager Matt Busby who was in a critical condition and was twice given the last rights while in intensive care.

Time was something United didn’t have on their side, though, as the club looked to rebuild a side which had been decimated by the crash. This huge responsibility lay with Busby’s assistant Jimmy Murphy, who had not been on the plane as he was away on international duty as the Wales national team manager that week for a World Cup qualifying tie with Israel.

When Murphy went to visit Busby in his hospital bed the United manager was only strong enough to mutter a few words of encouragement to his trusted number two: “Keep the flag flying Jimmy,” he said. Murphy needed no further encouragement, despite the awfulness of the whole situation.

Writing in his autobiography Murphy explained: “As my mind dwelt on the full appalling horror of it all I thought I would go mad, although I was doing my best to think about the future.”

And look to the future he did, relying on youngsters as well as the signing of experience in the form of Ernie Taylor and Stan Crowther to keep United’s season alive.

Murphy knuckled down and set about recruiting a whole new team as he attempted to form what resembled a football team once again, while still trying to attend as many funerals as he possibly could. In one of the most poignant moments Murphy led his newly assembled United team at a packed Old Trafford in an FA Cup tie against Sheffield Wednesday just 13 days after the disaster – even the programme that night was not able to print the names of the players, instead leaving eleven blank spaces.

Amazingly, that makeshift United team defeated Wednesday 3-0 with a team made-up of juniors and reserves such as Ian Greaves, Freddie Goodwin, Ronnie Cope, Colin Webster, Alex Dawson, Stan Pearson and Shay Brennan. Brennan scored twice on what was his debut that night and would eventually go on to play in the 1968 European Cup final ten years later.

Despite the gallant efforts United would only win one more game in the league that season and eventually, finishing in a respectable 9th place all things considered. But Murphy's men still managed to reach Wembley in the FA Cup with a final against Bolton Wanderers. There to watch United that day was Matt Busby, just three months after he flirted with death in a Munich hospital but now walking with the aid of sticks. 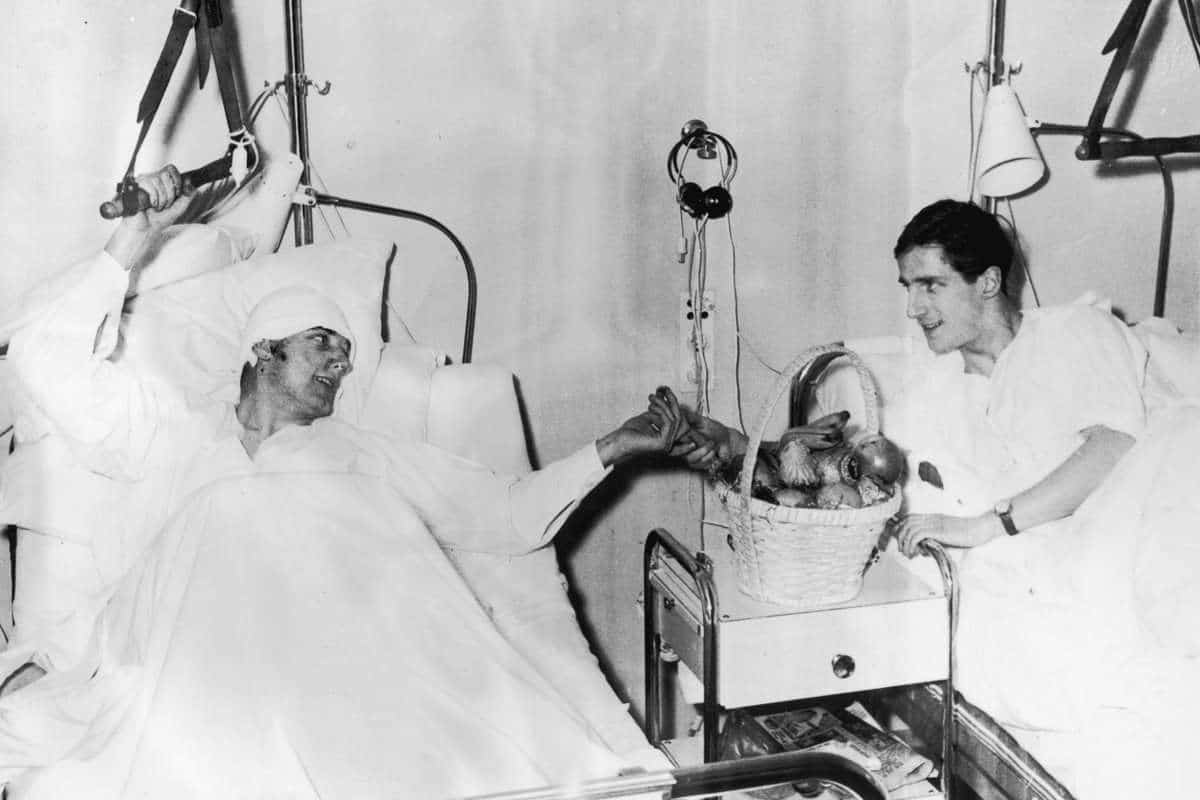 United were eventually beaten 2-0 thanks to two Nat Lofhouse goals, but the fact that they were there was an achievement in itself. The club even carried on in the European Cup too, despite holders Real Madrid sportingly offering to award United the trophy as the ultimate mark of sporting respect.

They defeated AC Milan at Old Trafford, before eventually losing out on aggregate at the semi-final stage. However, a mid-table finish in the league and an FA Cup final at Wembley was an incredible achievement considering the tragic circumstances that had taken place that day in Germany.

The crash was originally blamed on pilot error and Captain Thain, who survived the crash, even faced legal action in the months that followed. Subsequent investigations, however, would determine that the slush on the runway had significantly hampered aircraft, leaving it with not enough speed to leave the ground and not enough runway to abort take-off.

Manchester United would eventually rise from the ashes, phoenix like, once again and incredibly go on to be crowned the greatest side in Europe, with Munich survivor Bobby Charlton lifting the European Cup on an emotional night at Wembley in May 1968.

But for anyone involved with the club, whether they are a player, official, or just a fan, February 6th 1958 still remains the darkest day in the club’s illustrious history and one that will never be forgotten.